Brompton adventures are always enjoyable and of interest but yesterdays ride in and around Brighton proved to be a very memorable ride in more ways than one...

My train was due to depart from Victoria at 09:07 and make its way to Brighton but travelling through Hyde Park, with the knowledge that the Brompton World Championships circuit was just a few turns of the pedals, with a rush of blood to the head I decided to give it a go.

This is going to be a brilliant route and I suspect it will prove to be quick. Having completed one full lap I toyed with the idea of a second but luckily sanity prevailed and realising that I would might be late for my train, I headed off to Victoria.

Thankfully I got there is good time, boarded the train and secured an excellent seat adjacent to the onboard toilet - as is often the case with bicycle space on trains. I didn't see any other Bromptonians but a call from David informed that he was on a different carriage with five others.

A gentleman sitting opposite went to the toilet and after a short while I heard a knocking sound coming from said toilet and the words 'I can't get out!' Like the good citizen I am and trying to take the smile off my face I sprang into action and offered some assistance. I told the occupant of the toilet to press the door release. This didn't seem to work. A much louder knocking - more like pounding came from within along with the words 'Help! I'm locked in! I can't get out!!.' At this I started to giggle and snigger and knew that like a volcano about to erupt, loud uncontrolled laughter might emit from yours truly. Thankfully, a staff member (one of those people that goes up and down the aisles with a trolly of comestibles) saved the day and got him out. It was only by biting my lip and staring intently at my iPhone that I managed to control the laughter that desperately wanted to be let out.

I am glad to report that after this the remainder of the journey was uneventful. As we rolled into Brighton station I could see that all was hazy and a myst hung in the air. Getting off the train I met up with the others and we waited inside the station until all had arrived. 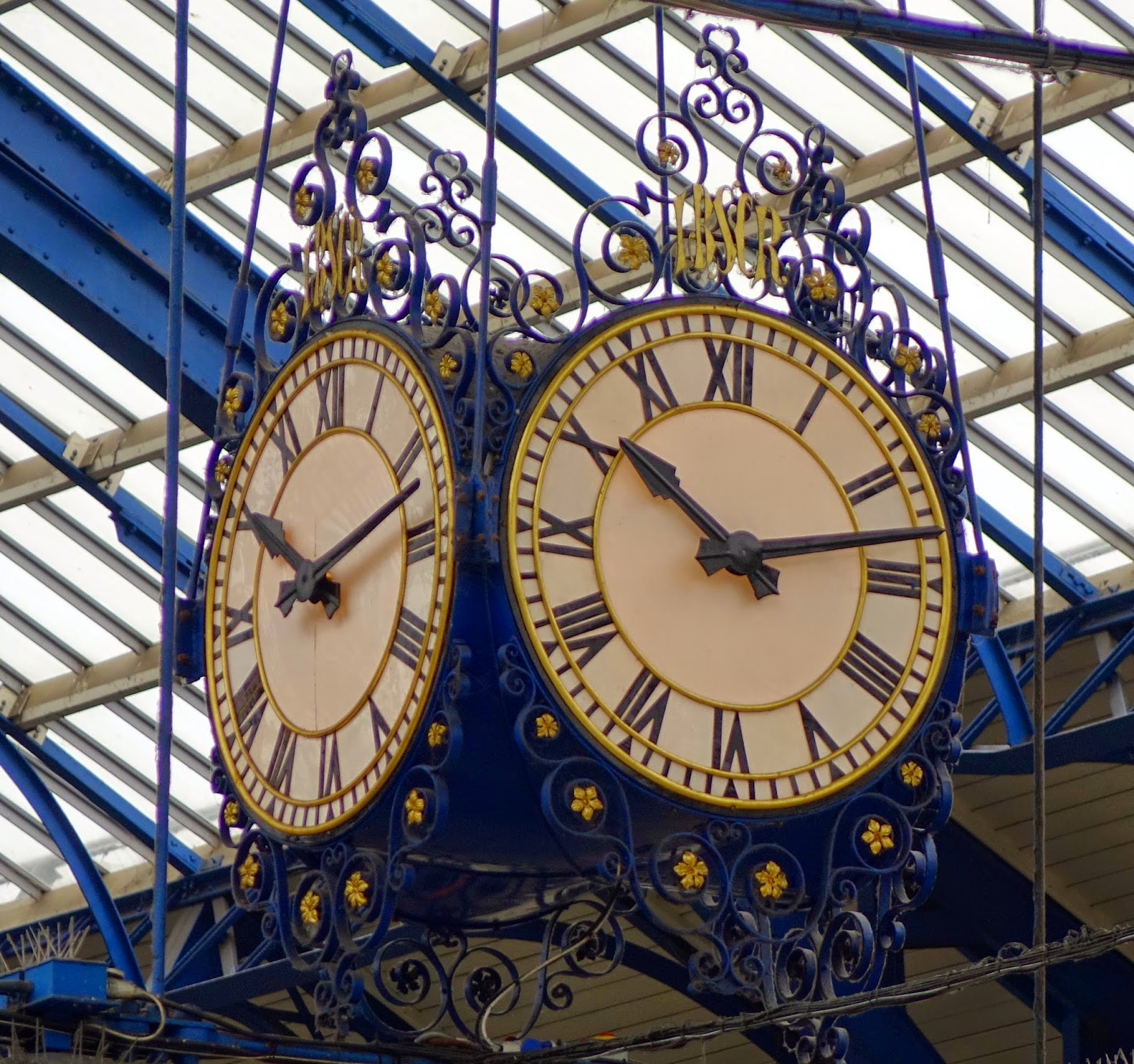 The roof of Brighton station is rather lovely and the large clock alluded to a begone era. While we waited for everyone to arrive, a few people bought a coffee or other supplies by which time we were more or less ready to go. 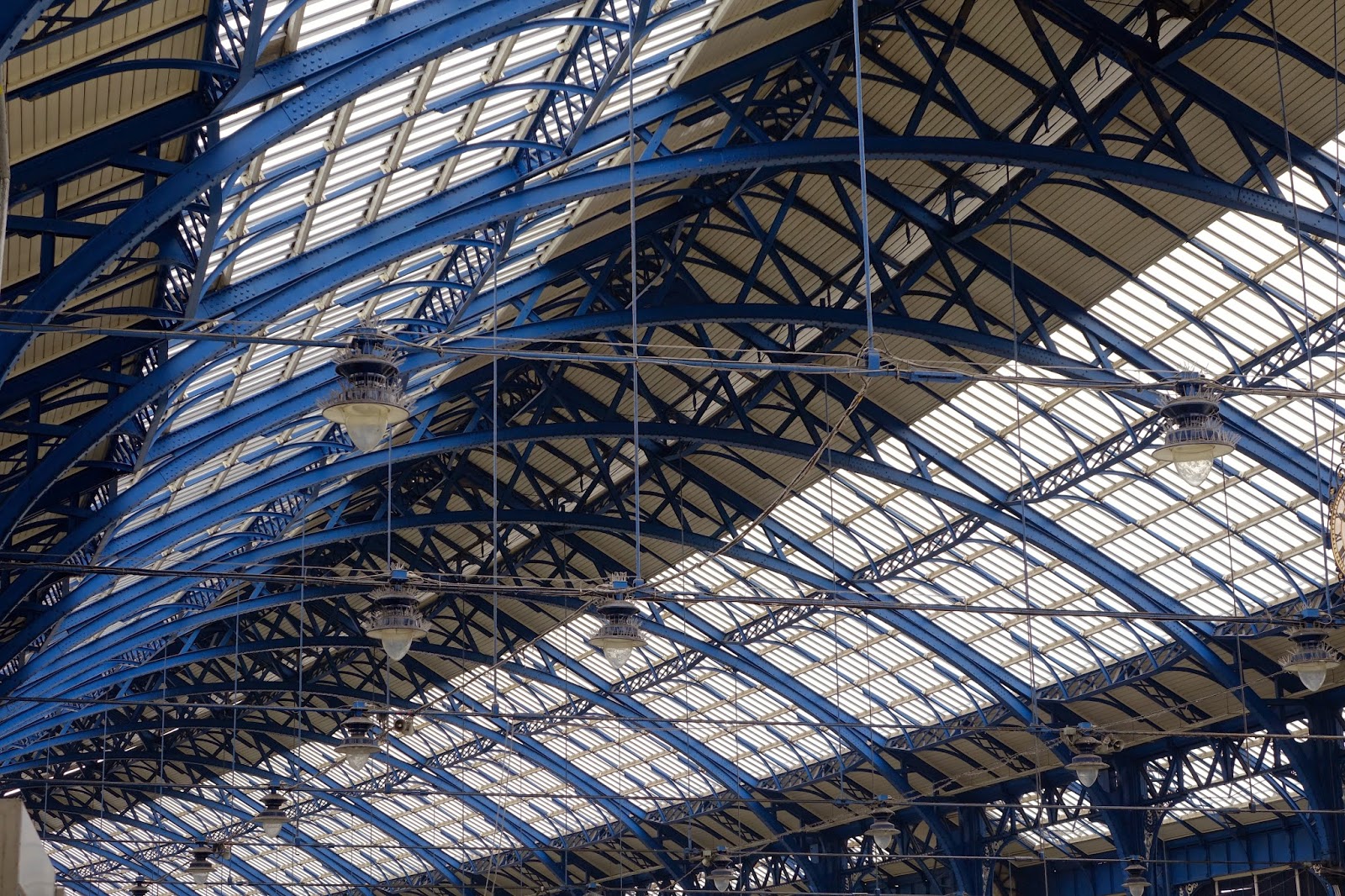 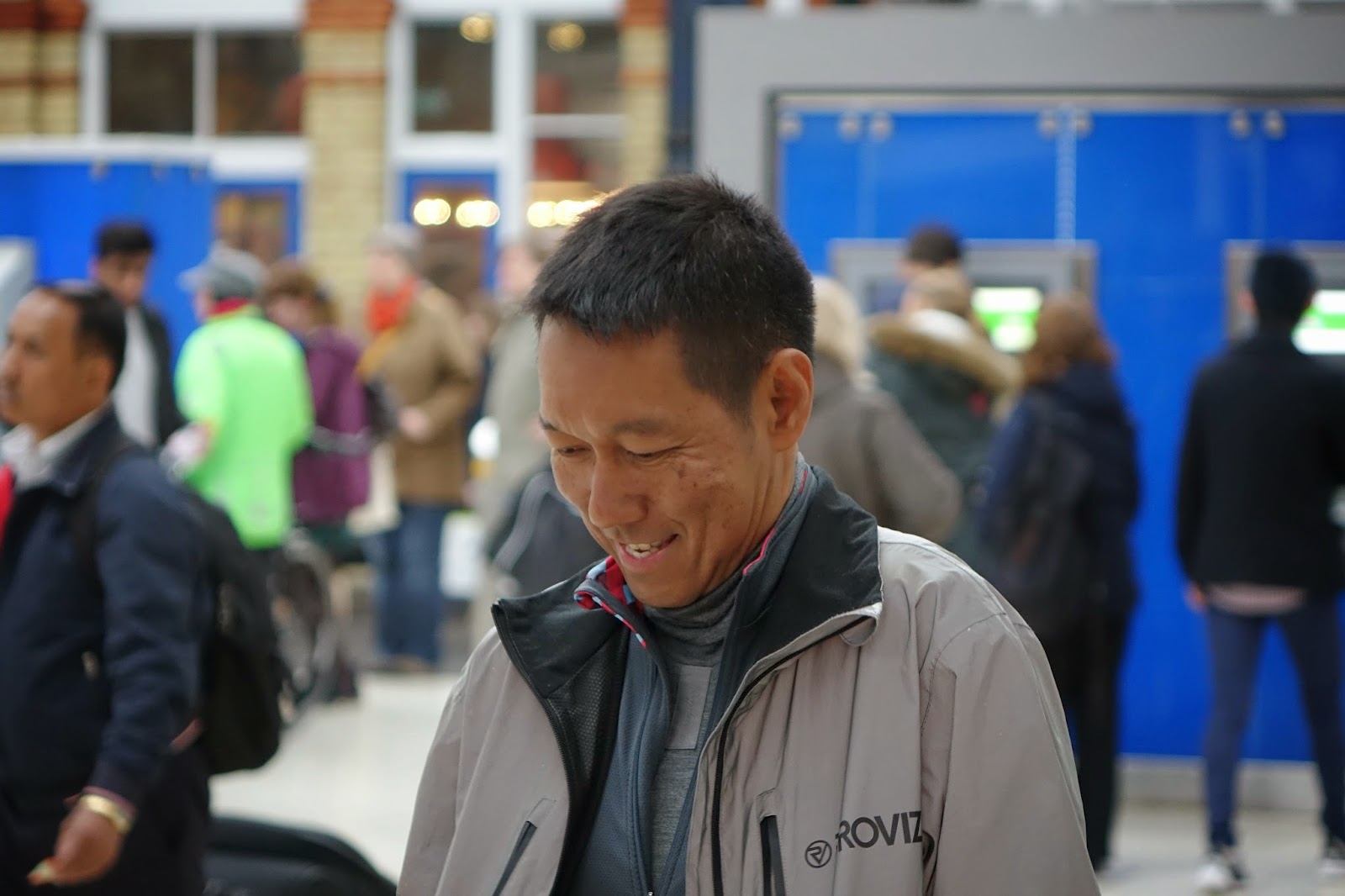 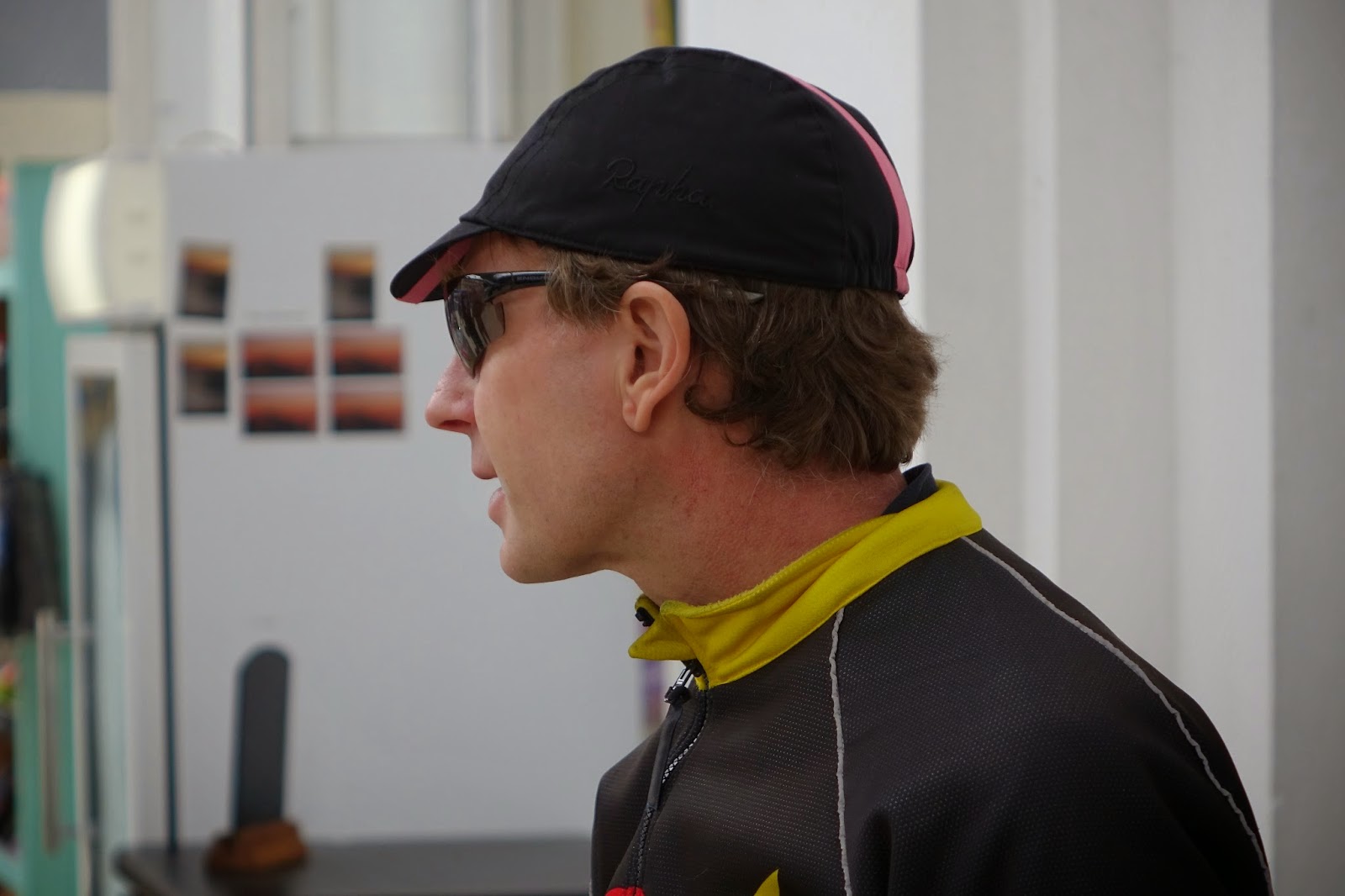 One participant turned up on a newly acquired Tern X10. Nice bike but with the front badge hanging off and the fact it wasn't a Brompton left the poor chap open to a fair amount of ribbing.

David had let us know that a hill in the form of Bear Road was but moments away. It certainly looked like a good gradient but I was unprepared for what was about to follow. Swains Lane last week was rated a 4 out of 10 in the book, '100 Greatest Cycling Climbs.' Would this be as hard?

The simple answer is yes! It was no Ditchling Beacon but going on for what seemed liked ages and with a 1:8 gradient for the first section and then a 1:11 for the second, it was tough. Thankfully it wasn't too windy for the most part but it was a formidable hill and I was happy to reach the top. I can easily understand how it was included at the end of a Tour of Britain stage.

After the conquest of Bear Road we headed back down to the Undercliff via a walkway come, cycle path come, bridal path. After Bear Road I thought the drama of the day was over. How wrong I was!

The path and its views were stunning. A thin blanket of mist hung in the air and despite the obvious precipitation the ground remained firm. There was also an incline as you can see in the photos below. For some reason I found it very difficult to ride my bike in a straight line? Generally I traversed the downward path like a big girls blouse and would have liked to have stopped to fit some sort of stabiliser to my bike. Knowing this would not be possible, I stuck my left leg out and used it scooter style, as apposed to pedalling. 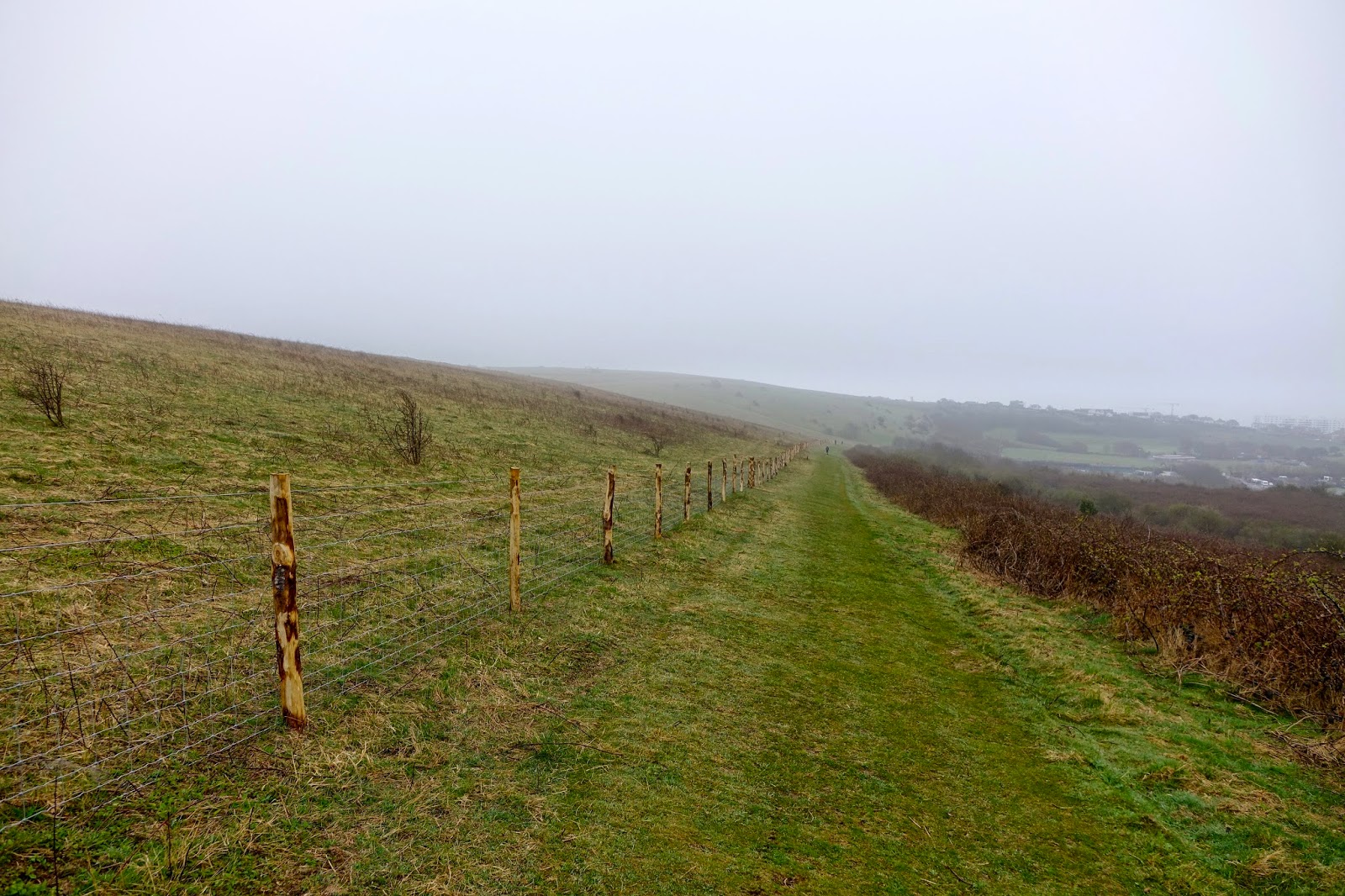 I must have looked quite a sight and as the others disappeared into the distance, enveloped by the mist I did my best to scooter along as fast as I could. I fancied that at any moment I might cascade down the hillside into an embarrassed heap. 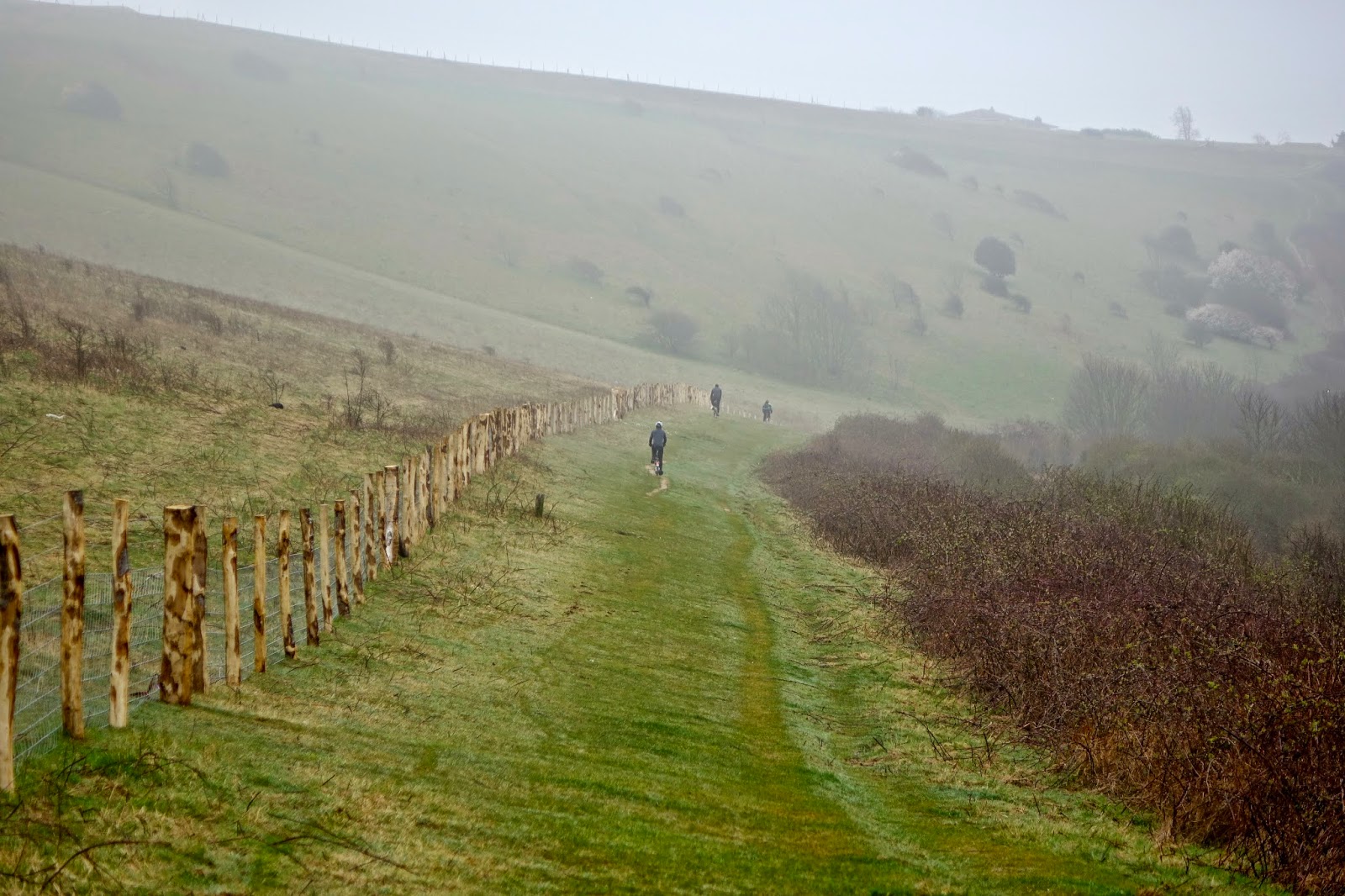 Stopping, more to collect my thoughts than take the photograph you see below, the scene reminded me of that part in the film 'The Great Escape' where trying to flee Nazis soldiers, Steve McQueen tries to find liberation by jumping over a fence. As I saddled up again I thought, look what happened to him! 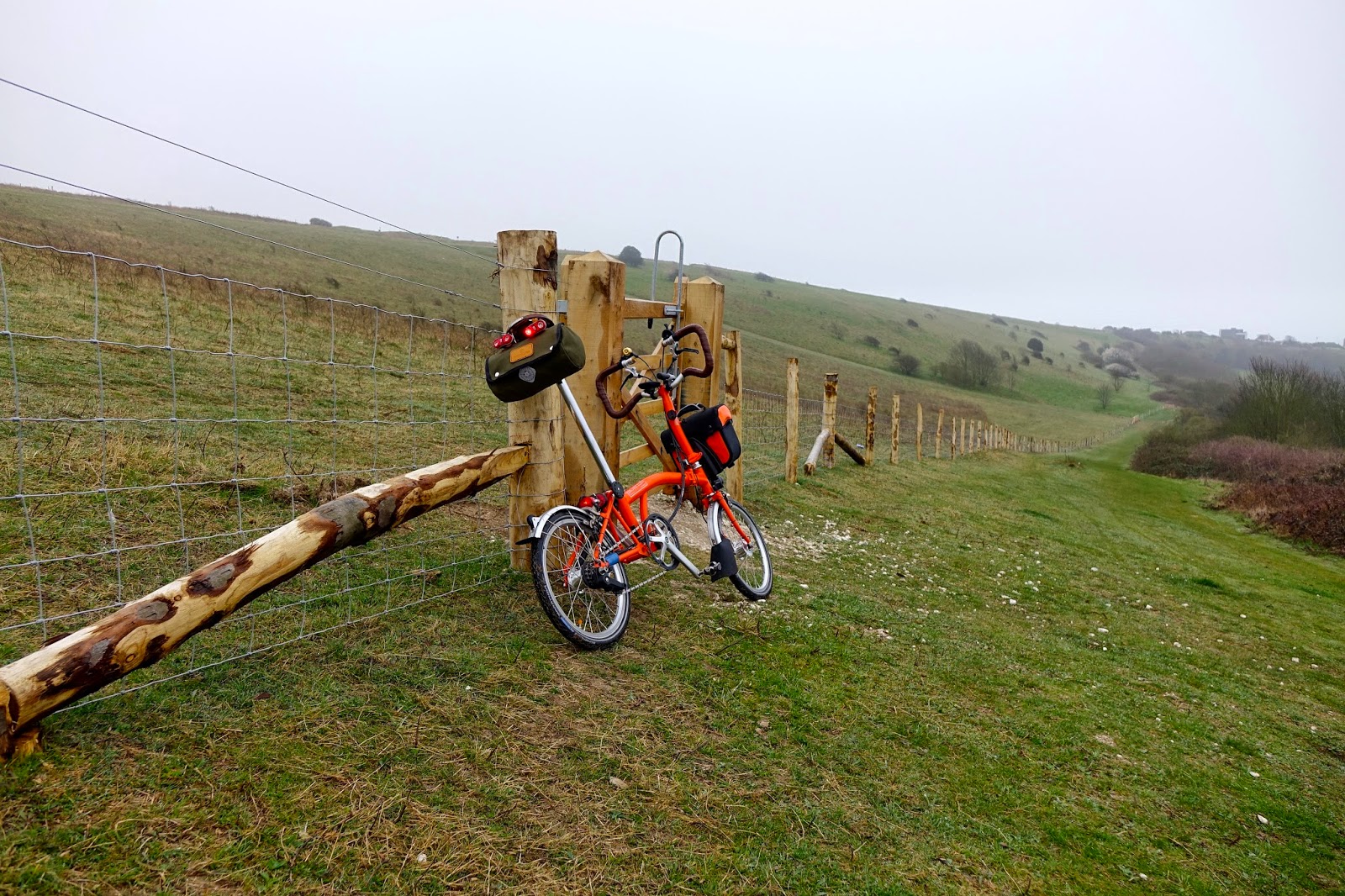 At the bottom of the hill I could see my fellow Bromptonians waiting and it meant that a metalled road surface was not far away...sanctuary! 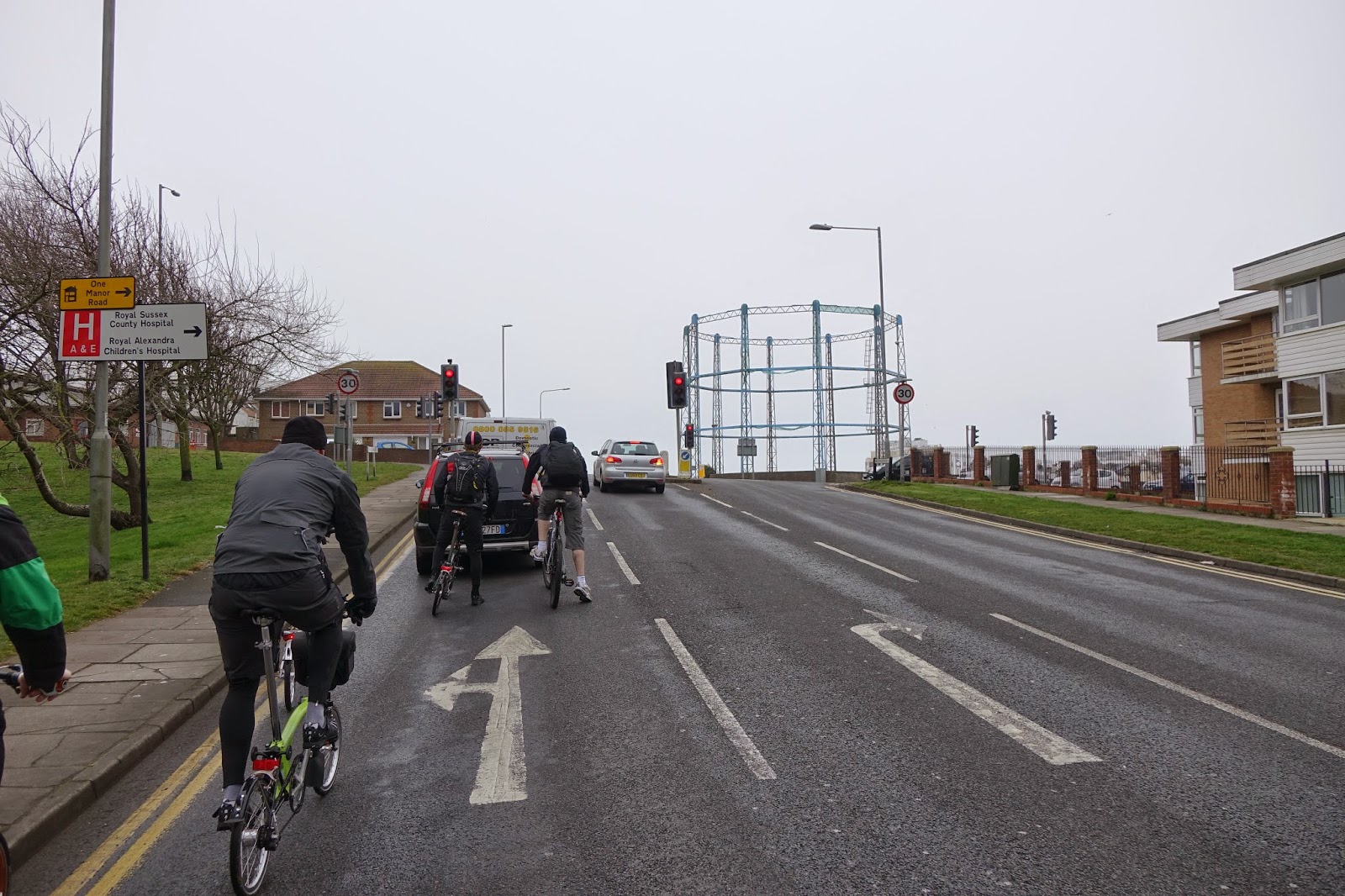 Making our way down to the Undercliff, the clouds looked ominous. The wind started to pick up and the sea could be heard in the distance crashing and rolling against the shore. 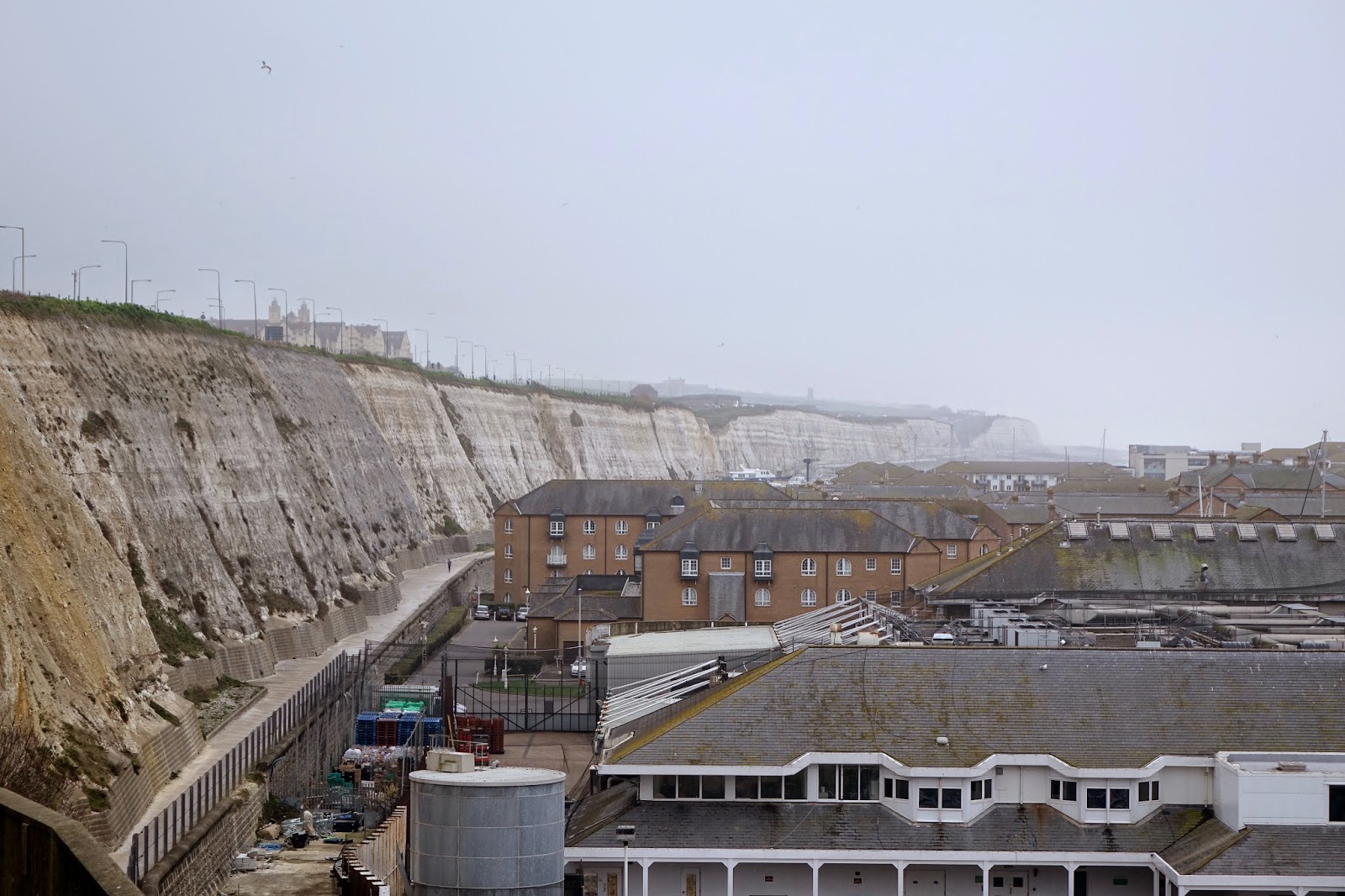 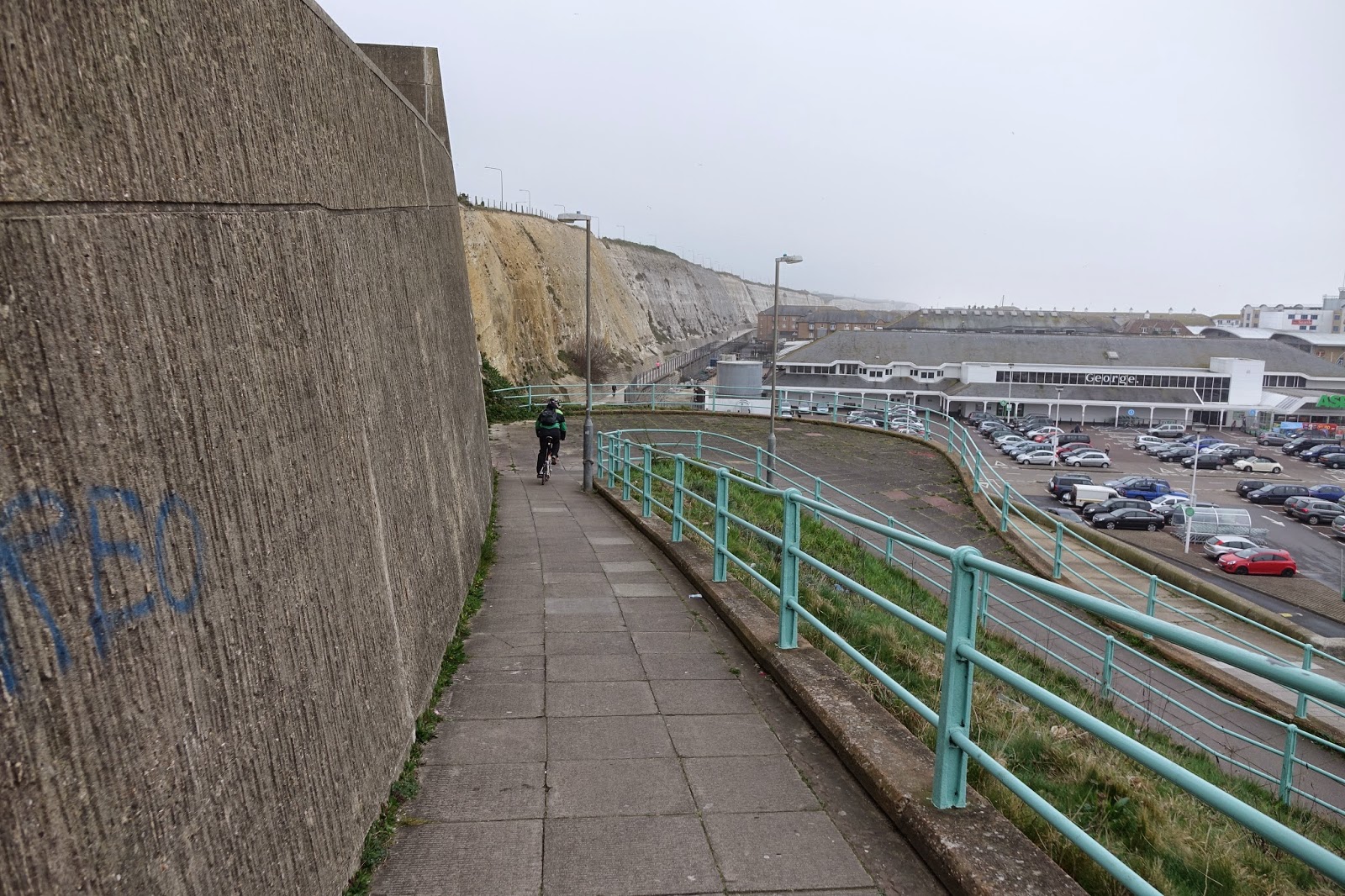 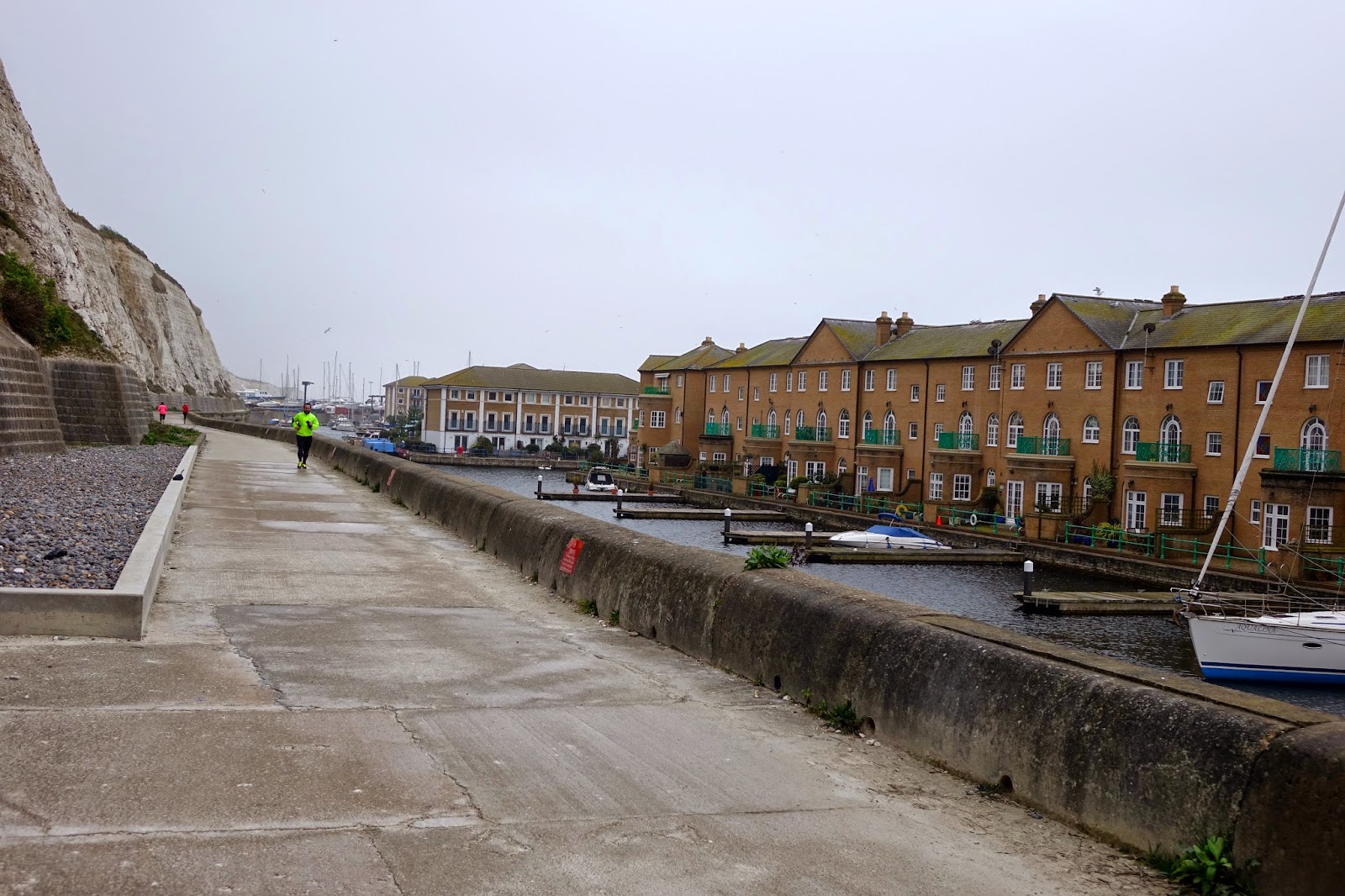 Cycling along the Undercliff is something I have done a few times and never fails to delight. The weather makes things different every time we have been here. 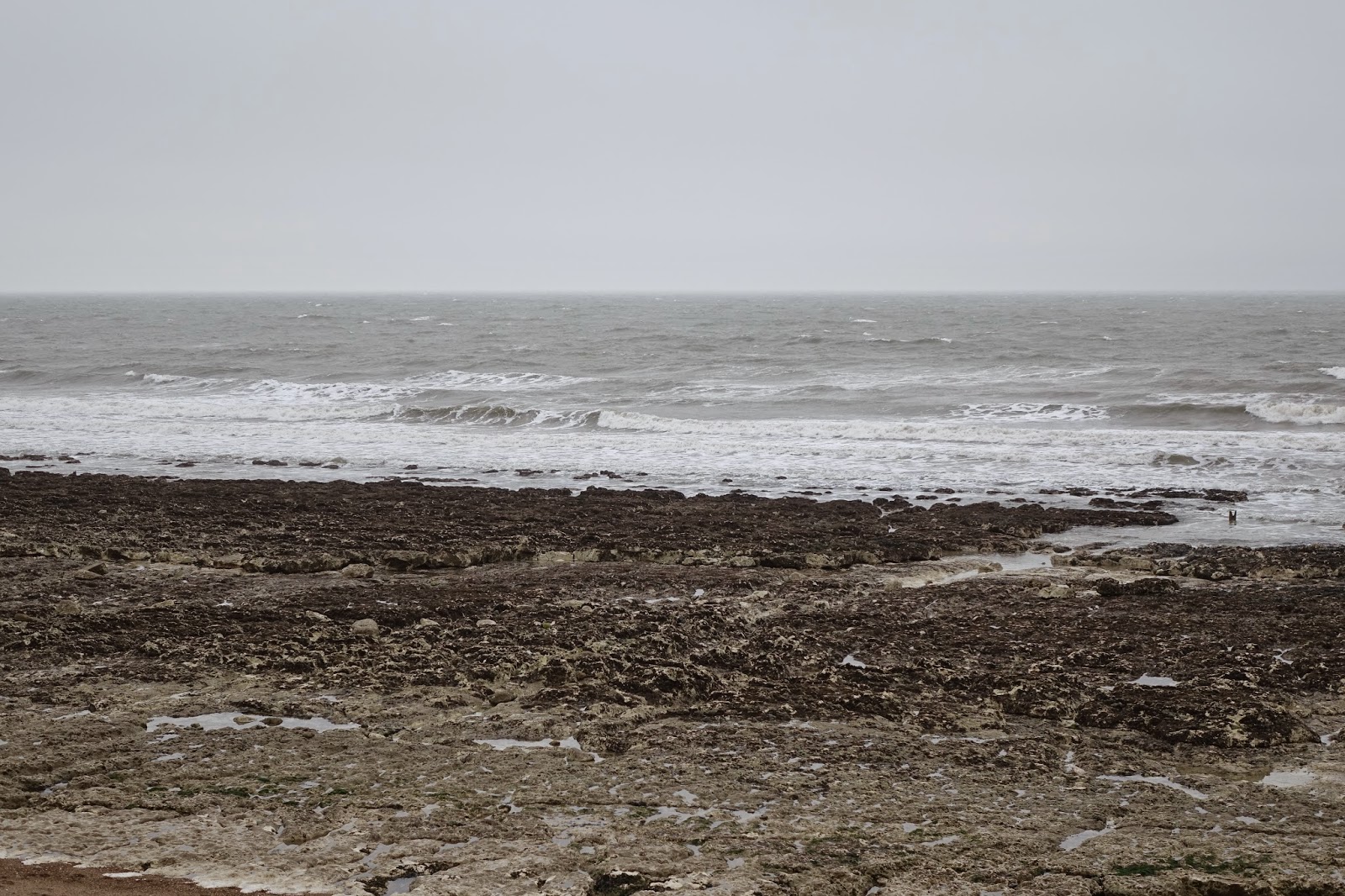 The tide was out which meant dramatic sights of the sea crashing into the sea wall and sent skyward would not be experienced. It was nonetheless still a stunning sight. 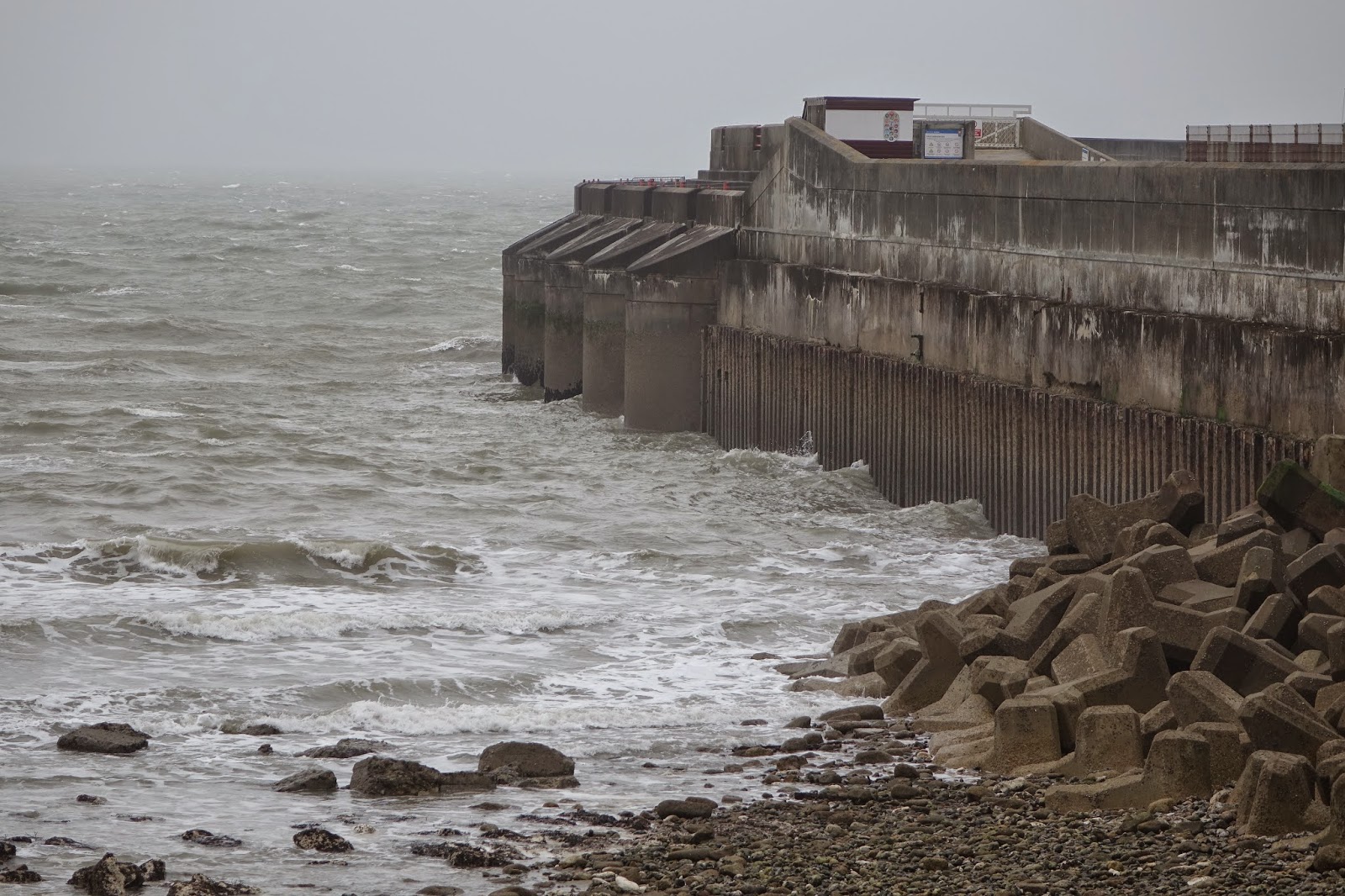 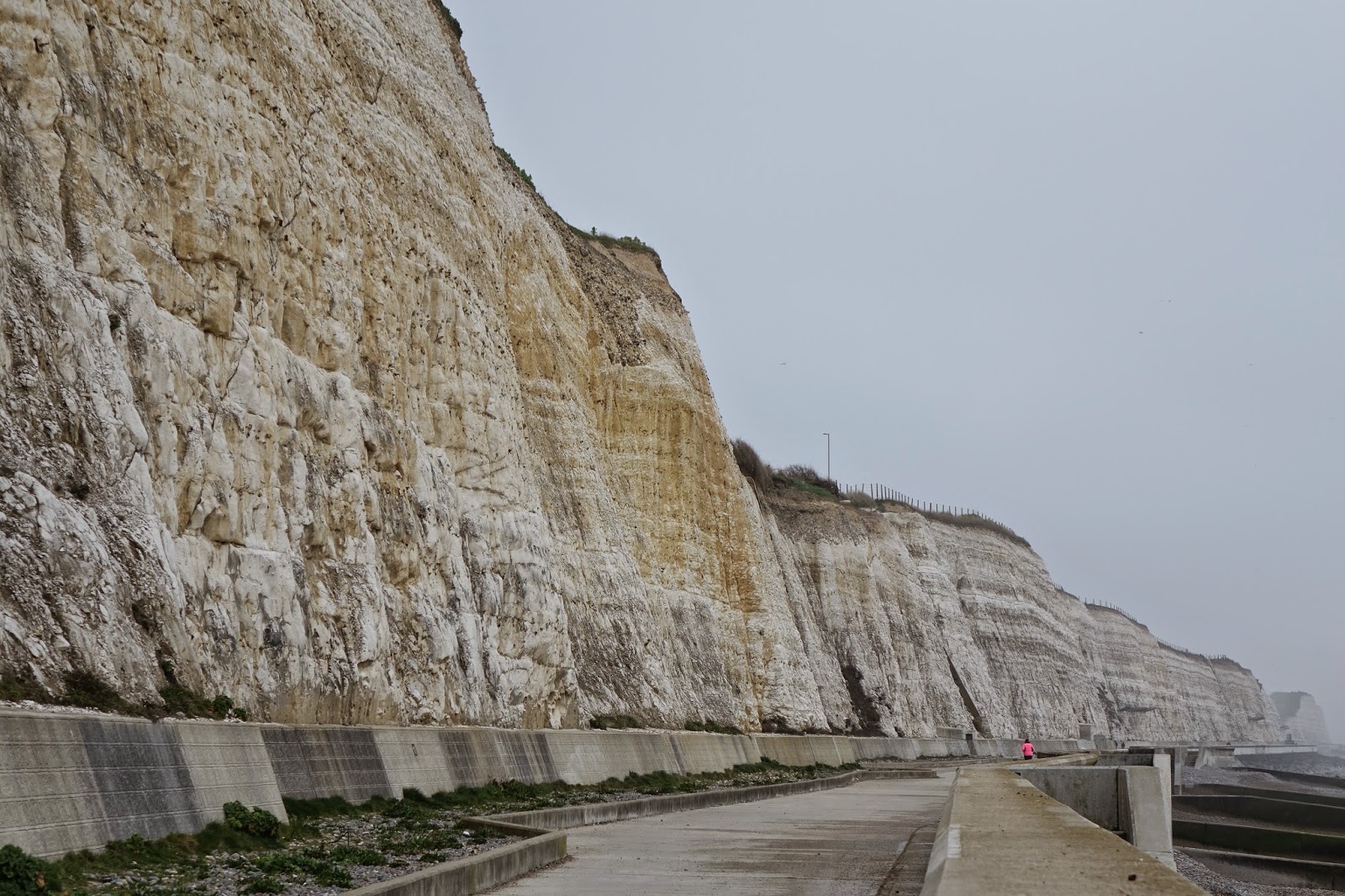 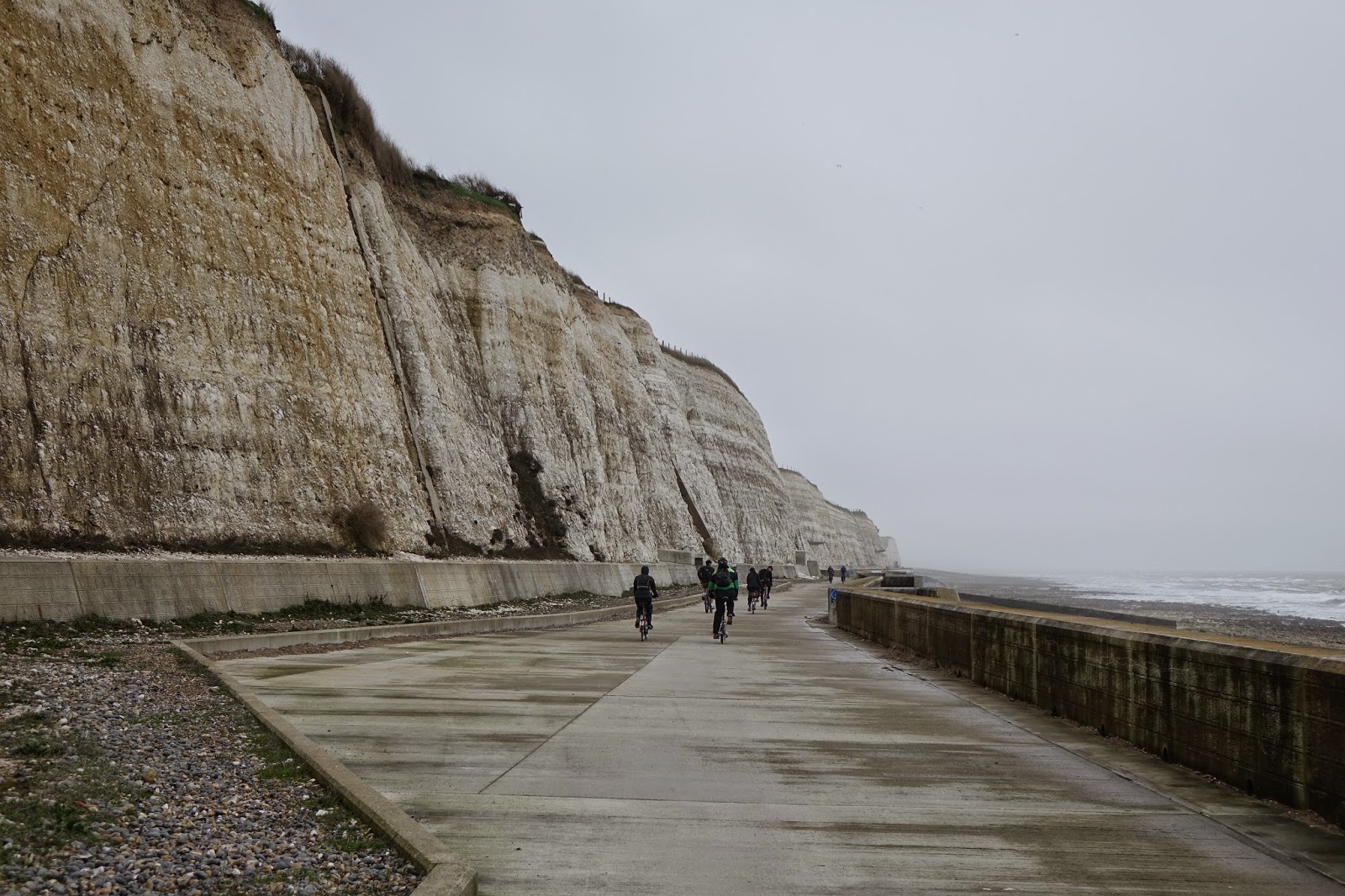 As we cycled along some chatted, some admired the views and lots took photographs. One of the great things about these rides is that there is always something for everyone. 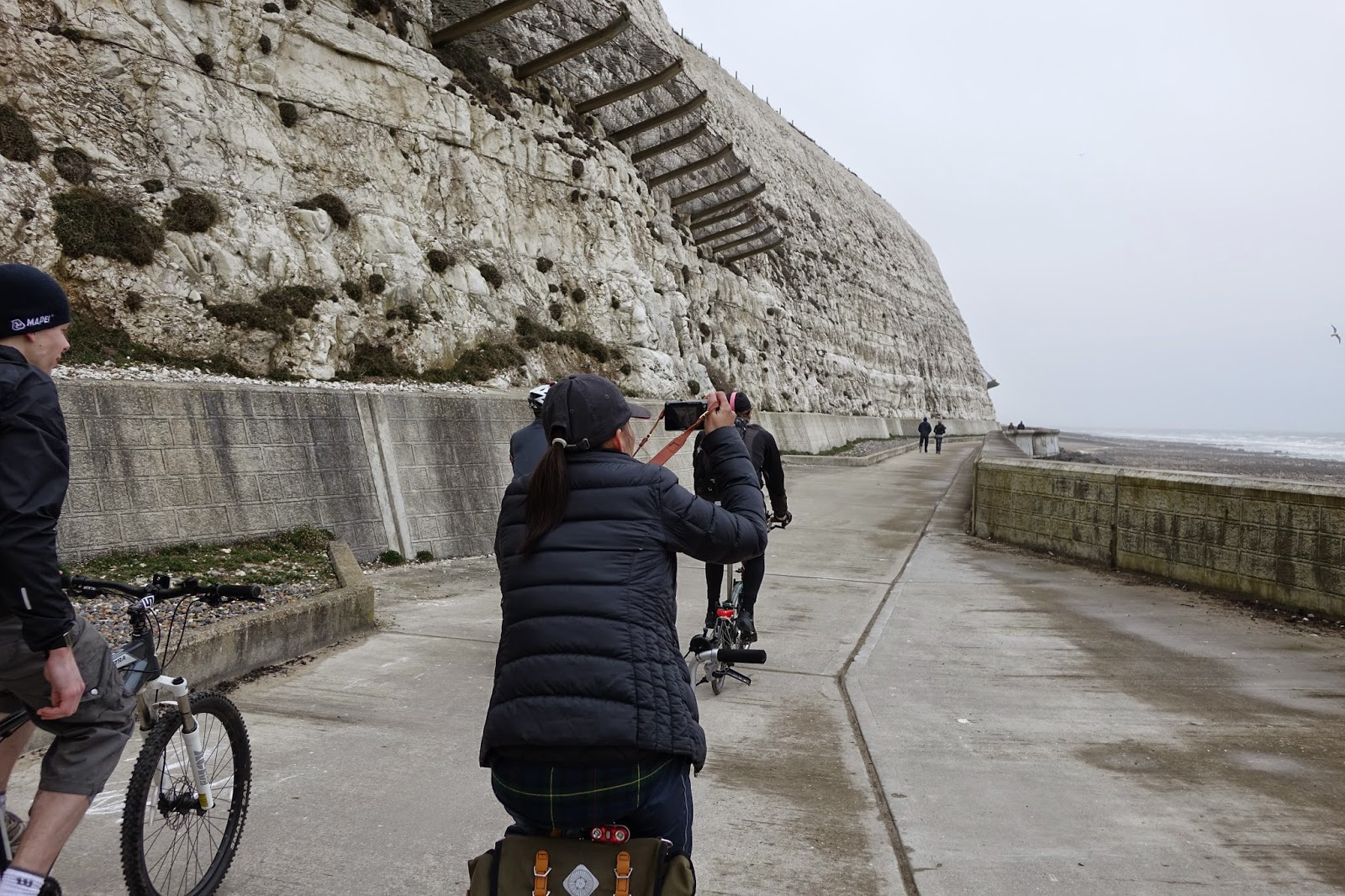 With the Undercliff done we headed up the steep ramp which took us up onto the top of the cliffs that you can see in the pictures. It was here that more drama ensued. The weather was definitely turning for the worse and a fine rain was made worse by a very strong wind. For a few hundred metres it was as if little needles were hitting ones face.

Cycling along the wind became incredibly strong to the extent that I was actually blown to the side and had to put my foot down. Battling along even when cycling downhill we sought sanctuary in a pub in Rottingdean call the 'Coach House.' After some good food we braved the elements and set off again.

There weren't really too many people about, the weather almost certainly playing a large part in this. There were few takers for Brighton's mini London Eye. 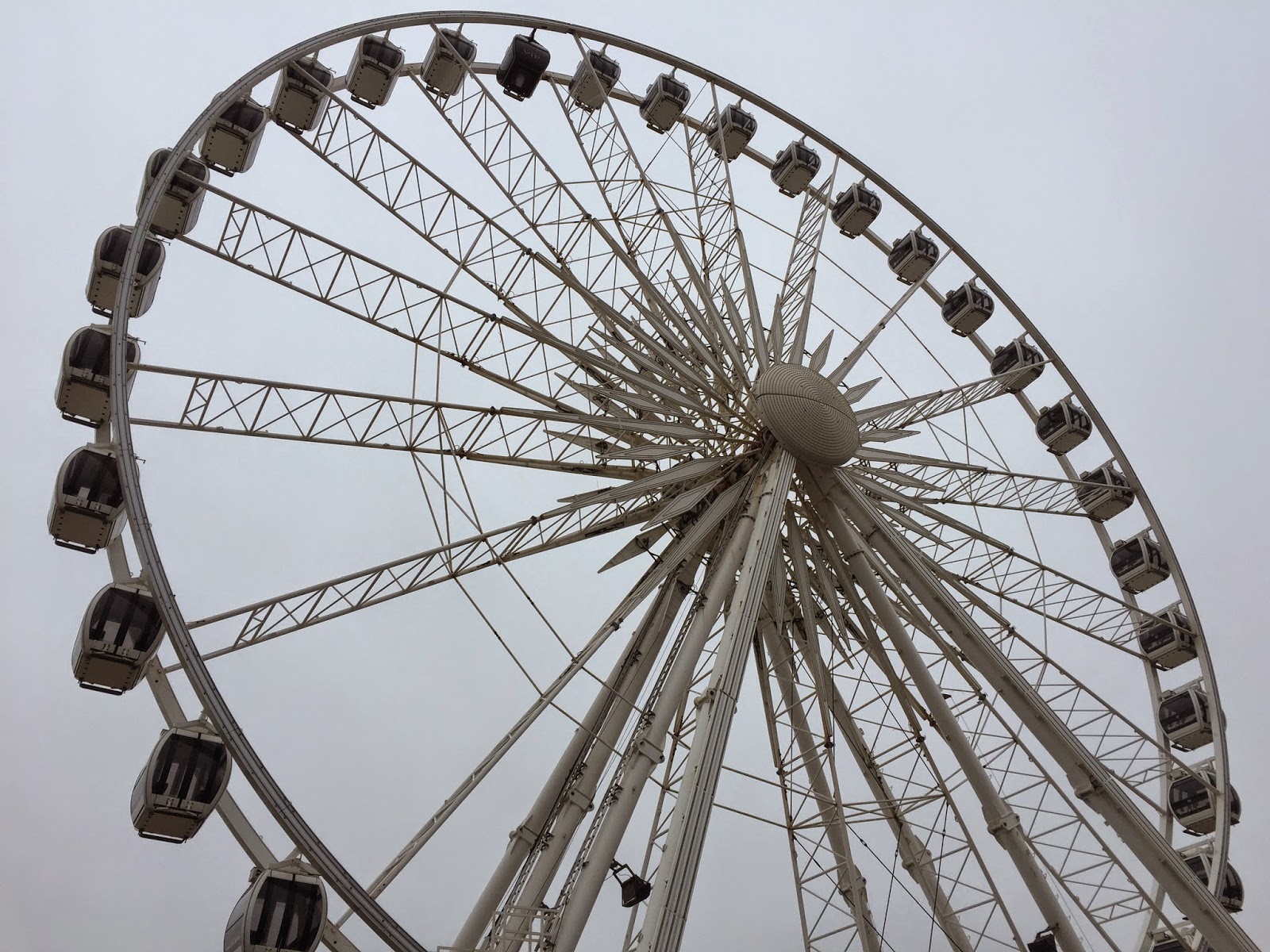 Cycling through a park we spotted a large crowd assembled so we went for a closer look. To our amazement we saw that there were several model steam trains being displayed and prepared by various gentleman. 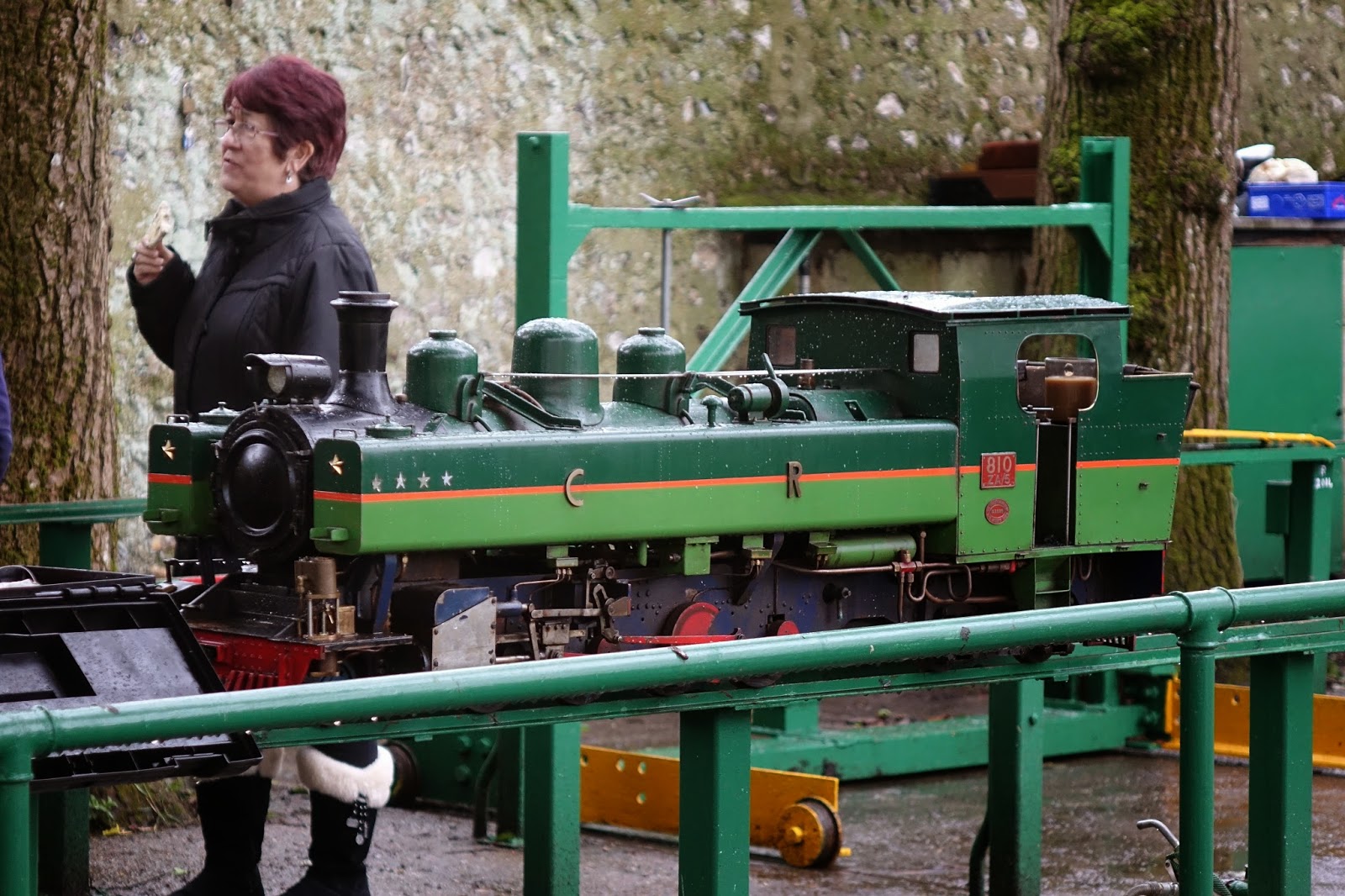 There was even a small railway track and these trains had the power to pull along little carriages / seats. The gleeful looks on the faces of those being pulled along showed it was lots of fun. 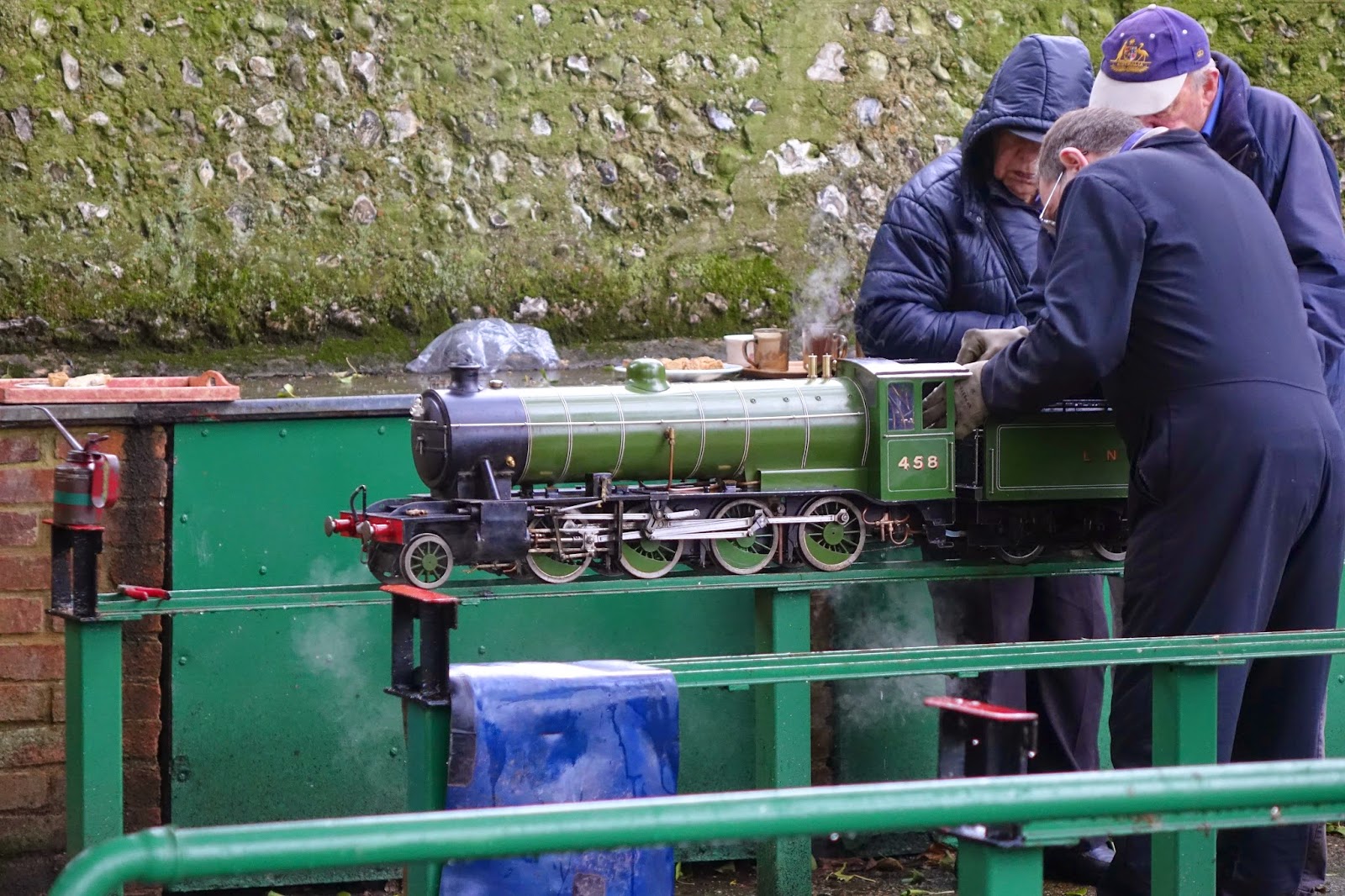 The sound of steam engines firing up and the sight of it bellowing to the heavens was enough to put a smile on anyones face. 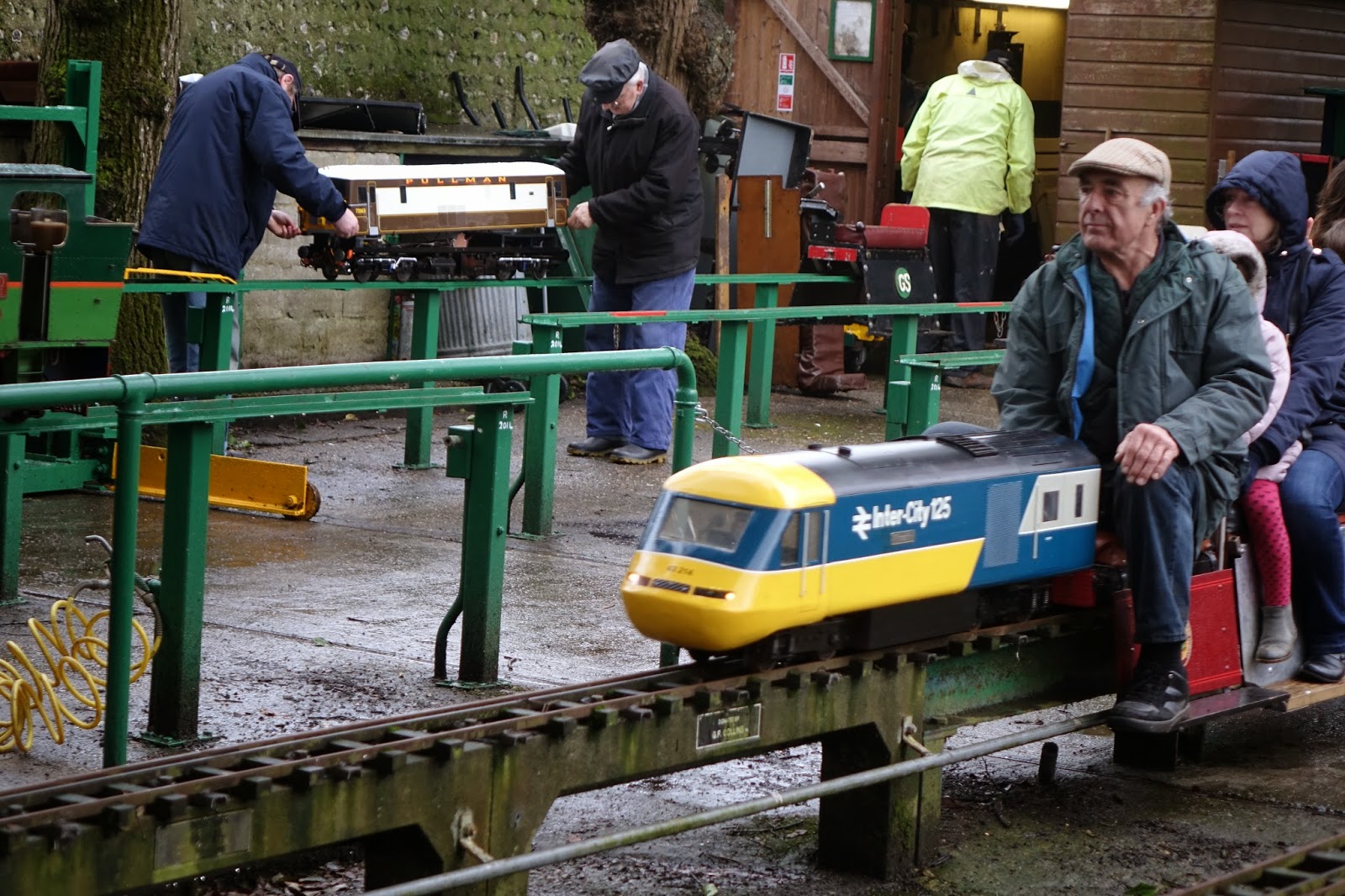 Many of us found ourselves taking lots of photos and videos which I found strange as I don't really care for such things. For me I suspect I could see common ground in a slightly eccentric hobby that involves British engineering at its best. 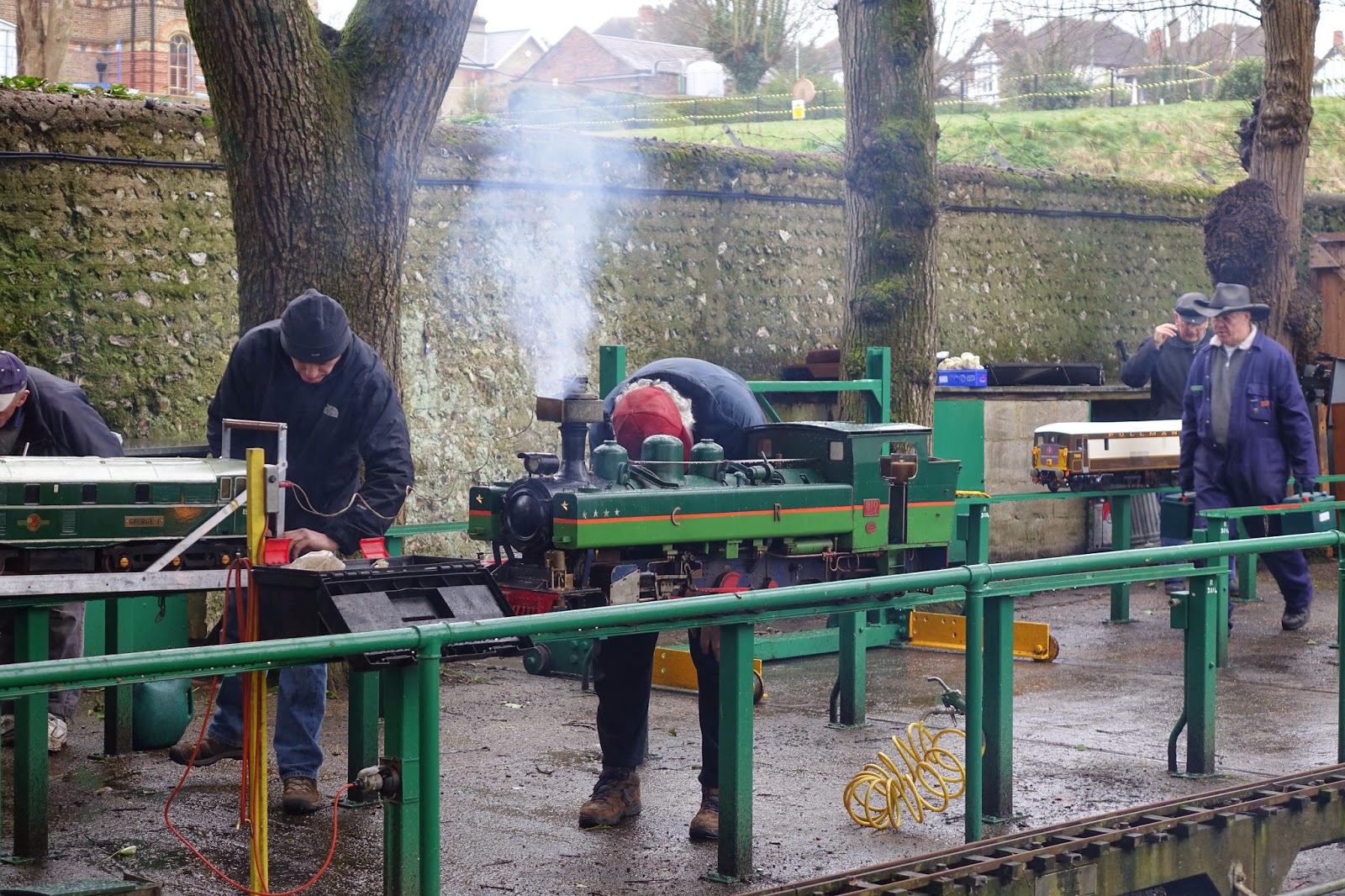 With 22 miles completed we called it a day and retired to an old haunt, 'Milk and No Sugar' a pretty fine coffee bar that is very cycle friendly. With a train to catch we headed for the station, boarded our train and had a good journey to Clapham Junction. There we went our separate ways after another wonderful little adventure.

As always thanks to all who came and especially to David who although under the weather soldiered on.