Eventful Brompton Ride to Epping Forest and Back

On Saturday morning as usual I was up bright and early and off to Charring Cross railway station, which acted as the starting point for our journey to the wilds of Epping Forest. Little did we know what an eventful adventure this would become...

When I reached the familiar territory of Wellington Arch at the south end of Hyde Park, I saw members of the Household Cavalry trotting on. I cannot tell how many times I have seen this over the years but it never fails to make me stop and stare. Riding at walking pace I knew that as soon as they reached the top end of The Mall they would be allowed to trot gently so I wanted to try and beat them to that point so that I wouldn't be stuck behind them all.

Unfortunately, this didn't go to plan and I am sure you can guess why? I decided to break out the waterproof camera and take a few seconds of video. This mean that I was behind them going down The Mall! This proved to be perilous to say the least! I had to use all my cycling skills to negotiate vast quantities of poo being excreted in random and rapid fashion. Eventually they turned off and I had the chance to accelerate to just over 26 mph before slowing to go under Admiralty Arch.

At Charring Cross the other intrepid adventurers were waiting and prepping themselves. It was lovely to see familiar faces and a few new ones.

Just past 09:30 and after a brief run-through of the ride by David we were off, excited yes however unaware of just what an eventful day out it would be... 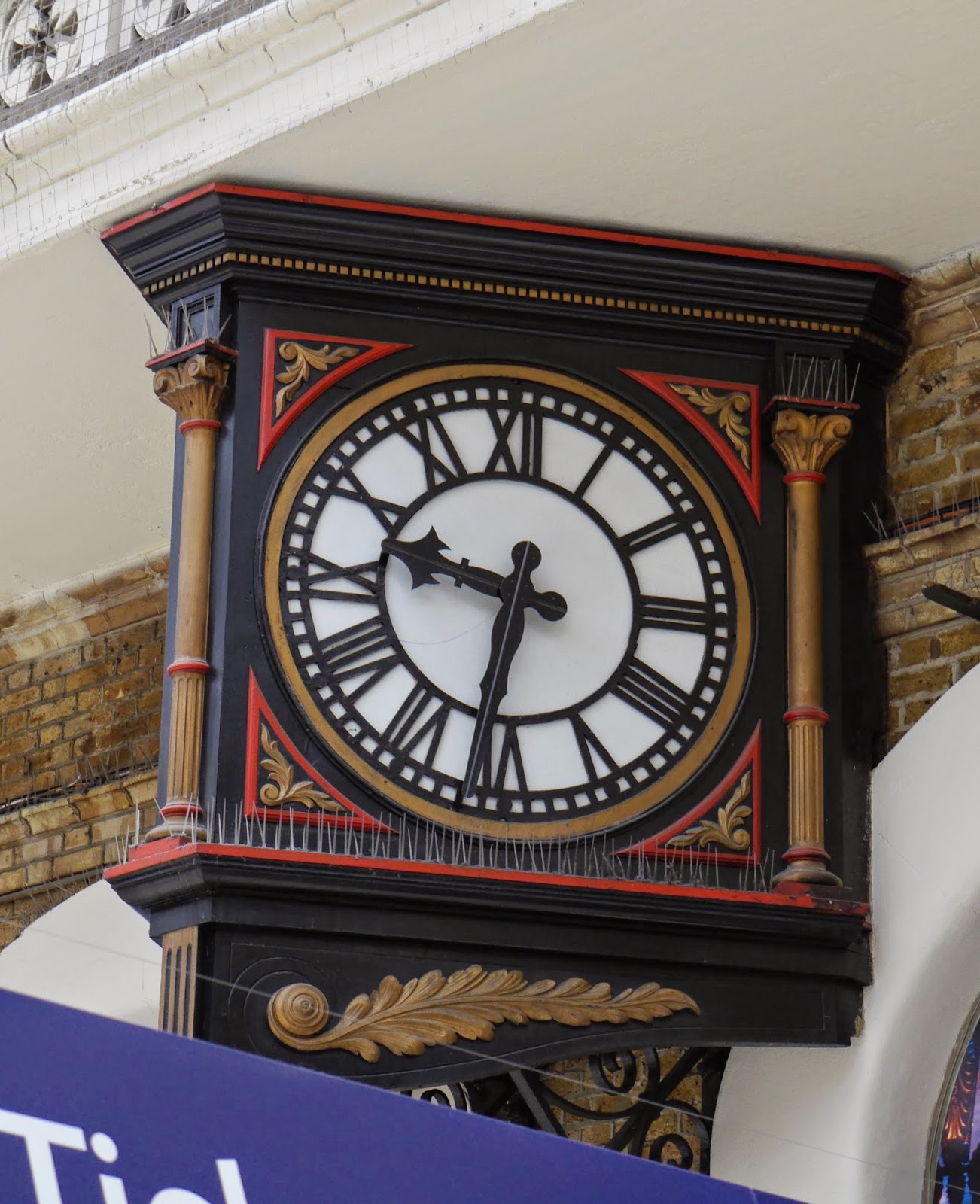 The weather was pretty changeable throughout the day. When I cycled to Charring Cross it had already started spitting rain. Light rain sporadically fell for the entire day. As a result my big camera didn't really see the light of day.  We passed Smithfield Market home to a certain race and memories of this particular event flooded back. 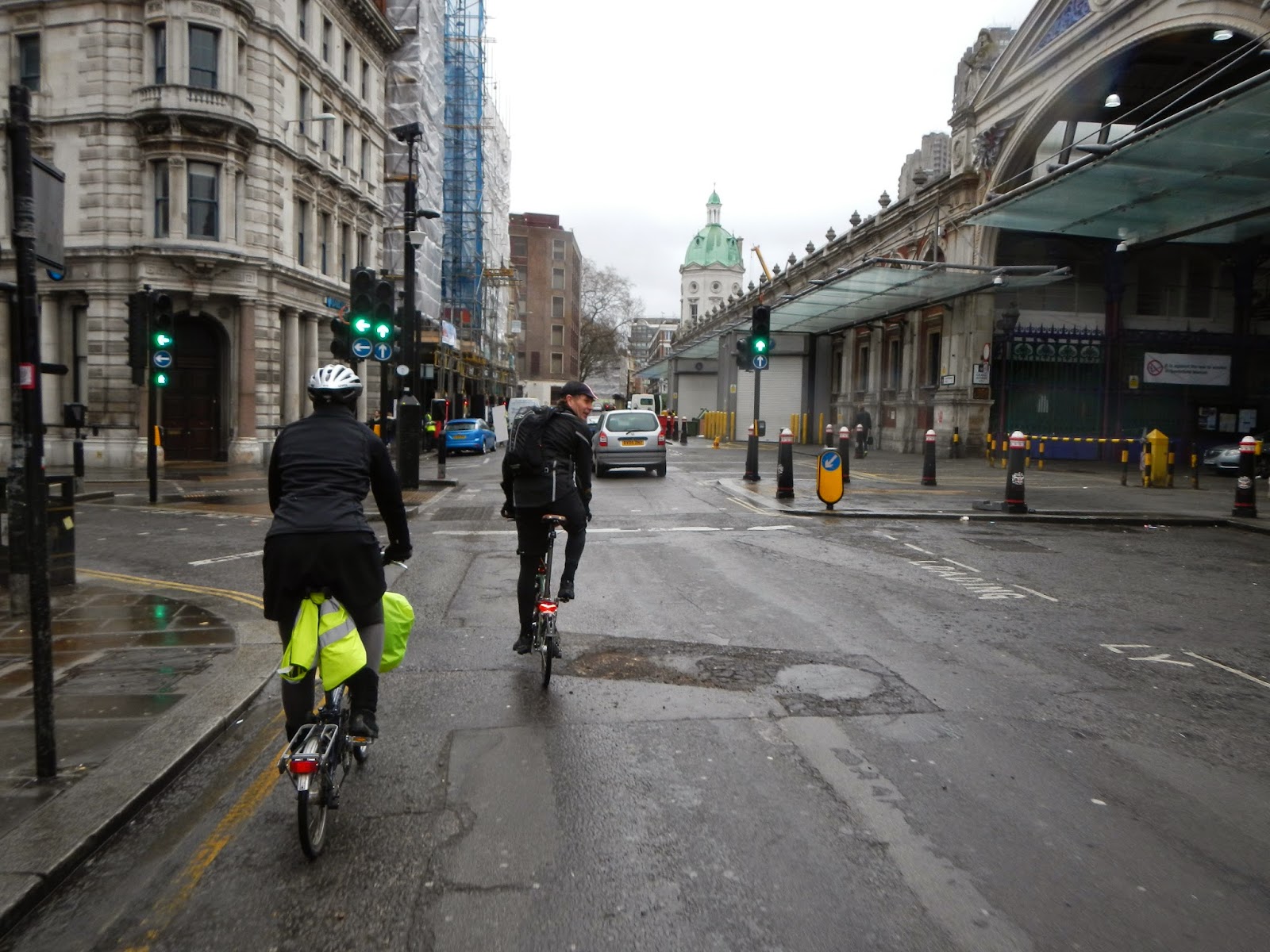 Cycling towards Hackney we passed the famous Empire. I have not been there before but many a performer has appeared there over the years. 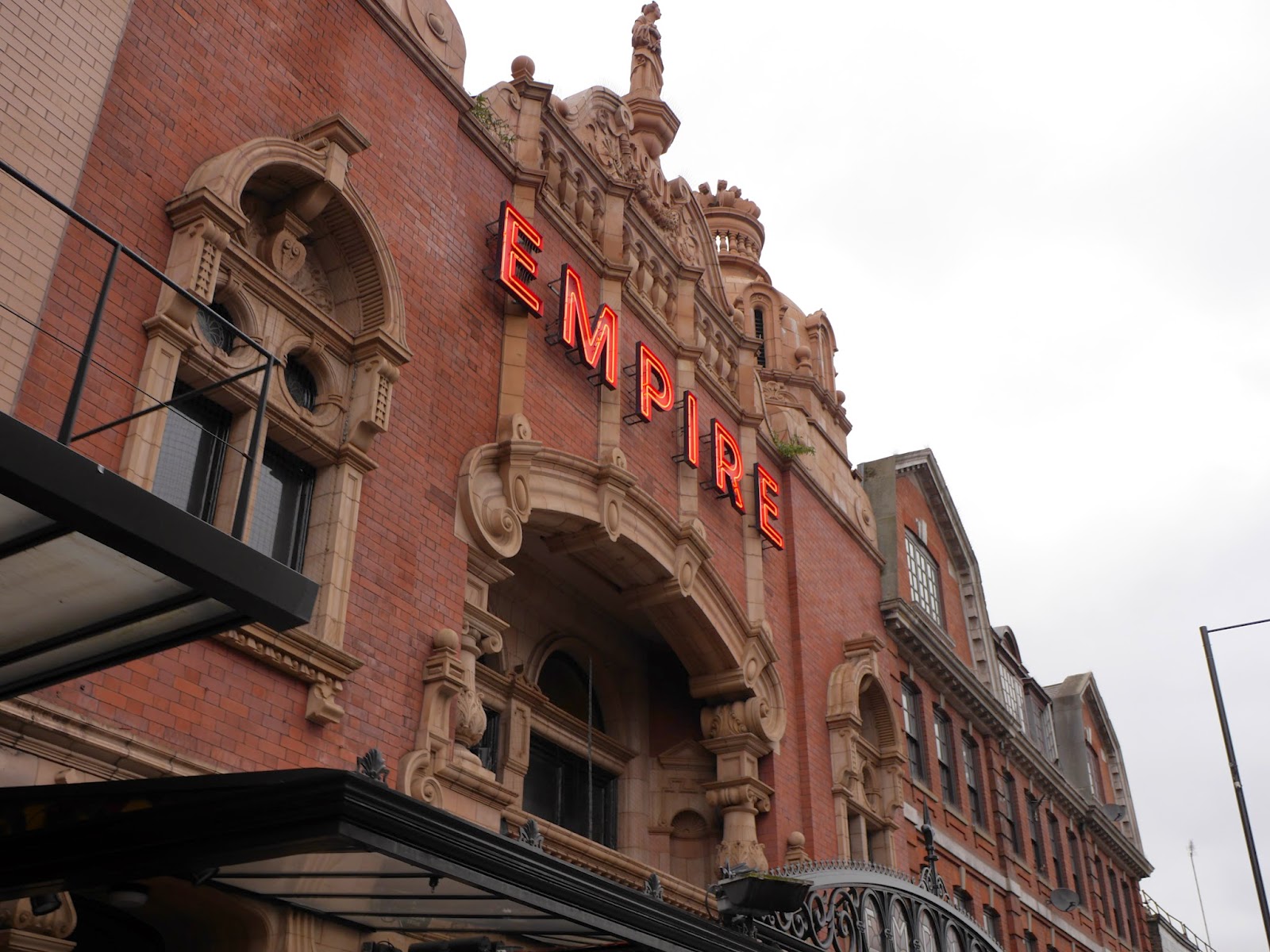 Further still we cycled past a market that sold things like olives, French bread, Italian cooked meats...I am sure you know what I mean. I have to say for some reason I instantly took a dislike to it? It seemed somewhat hipsterville and superficital. I was glad to pass it by if truth be told.


Thankfully we passed through that ghastly market place swiftly and made our way to a stretch of the Grand Union Canal. 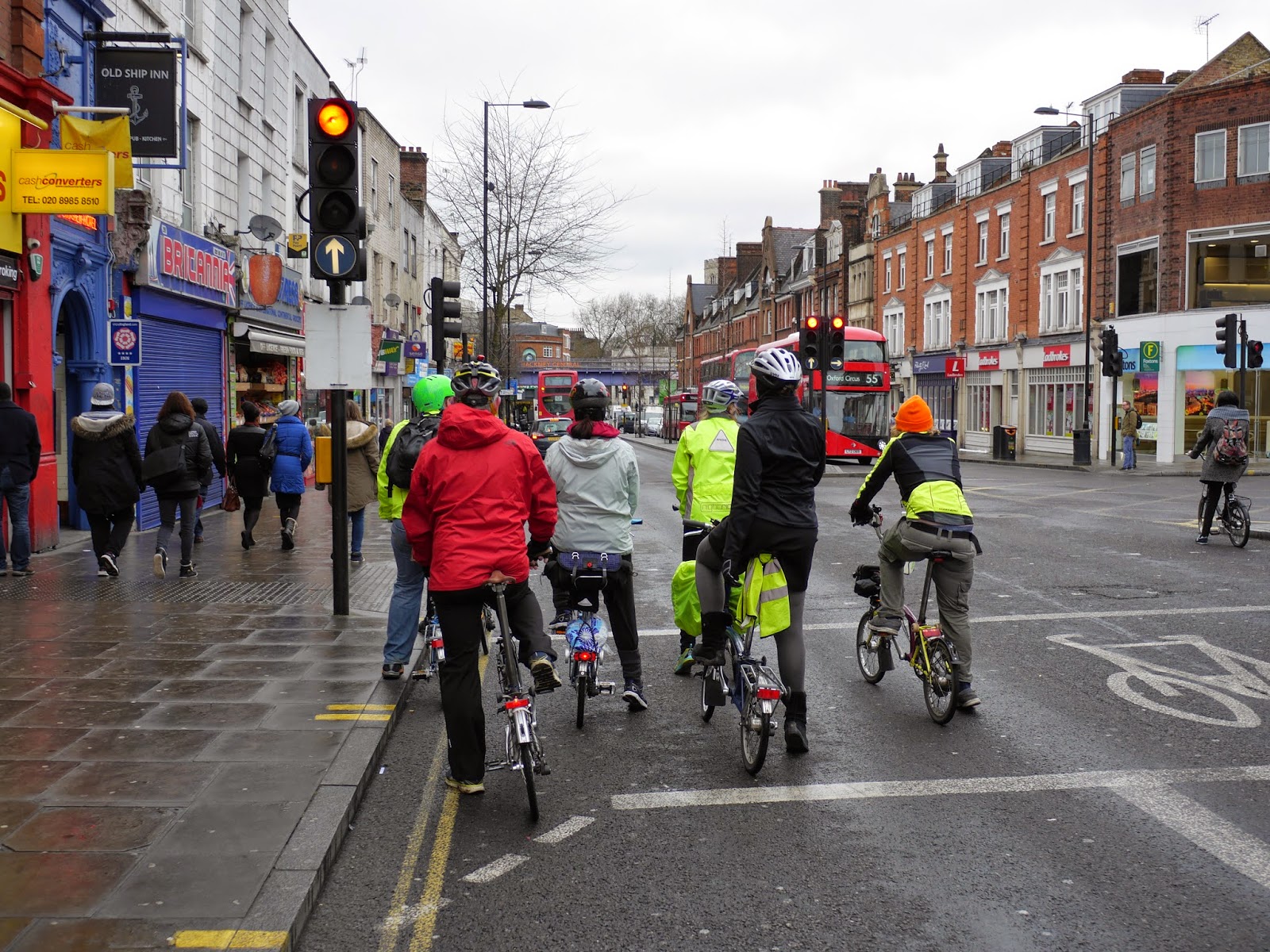 Unfortunately the hipsterville and superficial continued as jogging towards me along the tow path was Russell Brand. I am no fan of celebrities, theatrical types, politicians and their ilk and I only hope that as we made eye contact he saw me roll my eyes towards the sun, tutting as I did. 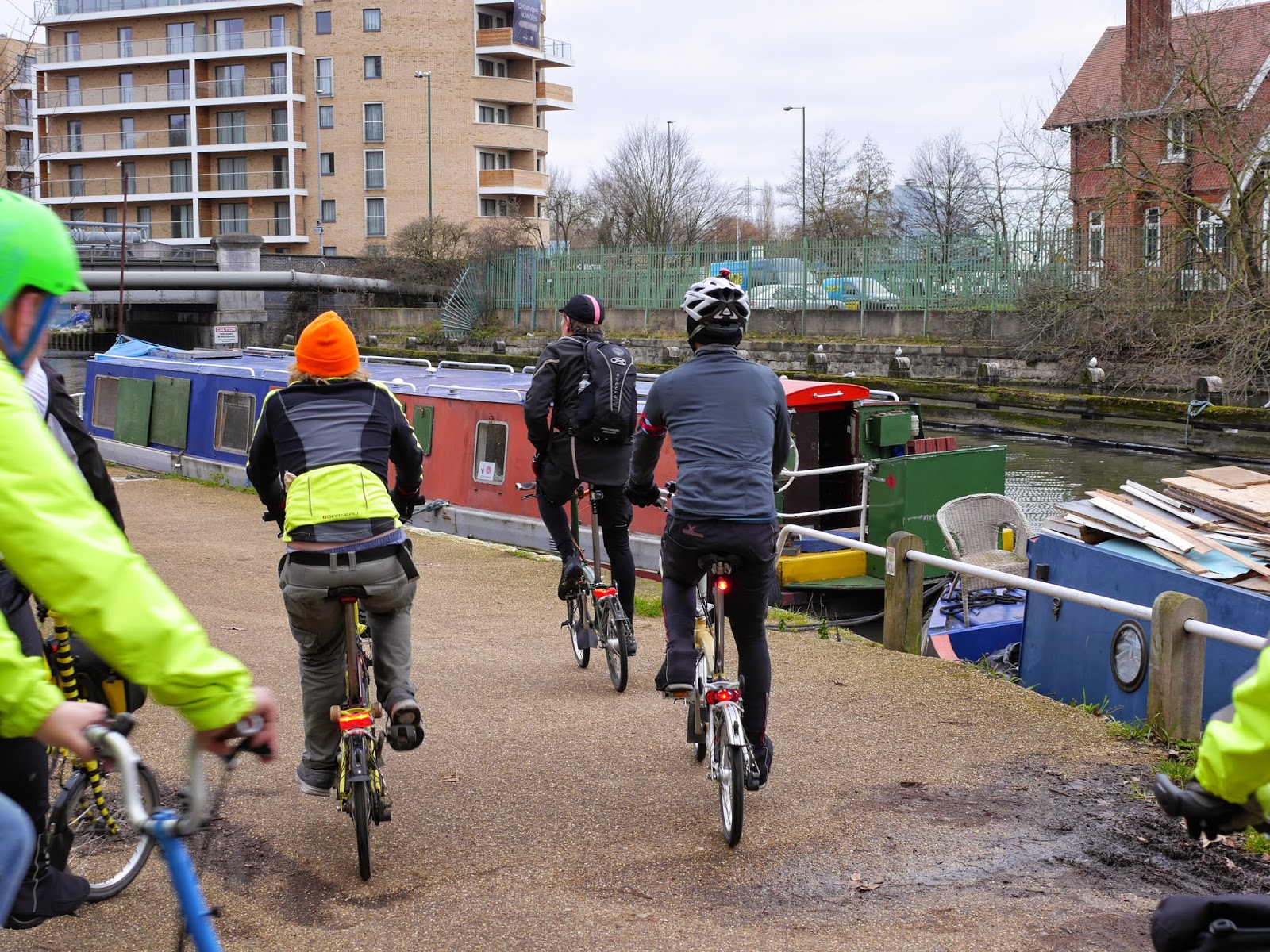 In a semi-truculent state, induced by cycling through a vile market and passing a jogging Russell Brand I steadied myself and normal service was resumed. 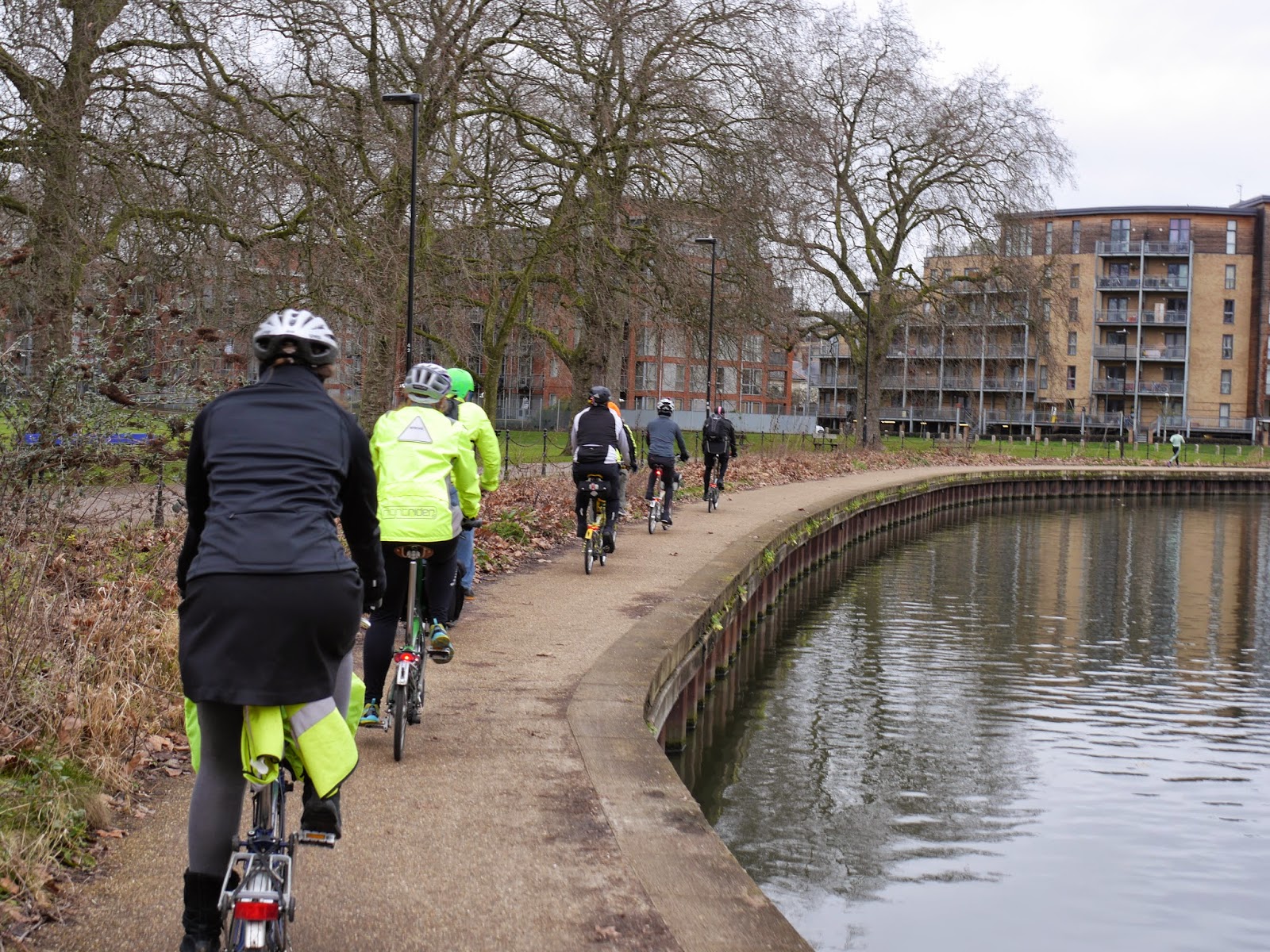 The ride so far had taken us along road, canal tow path and was certainly varied. Out on the canal were several rowing eights, fours and pairs. It was as if there was a mini regatta as coaches on meaty mountain bikes screamed instructions at those poor unfortunates on the water. 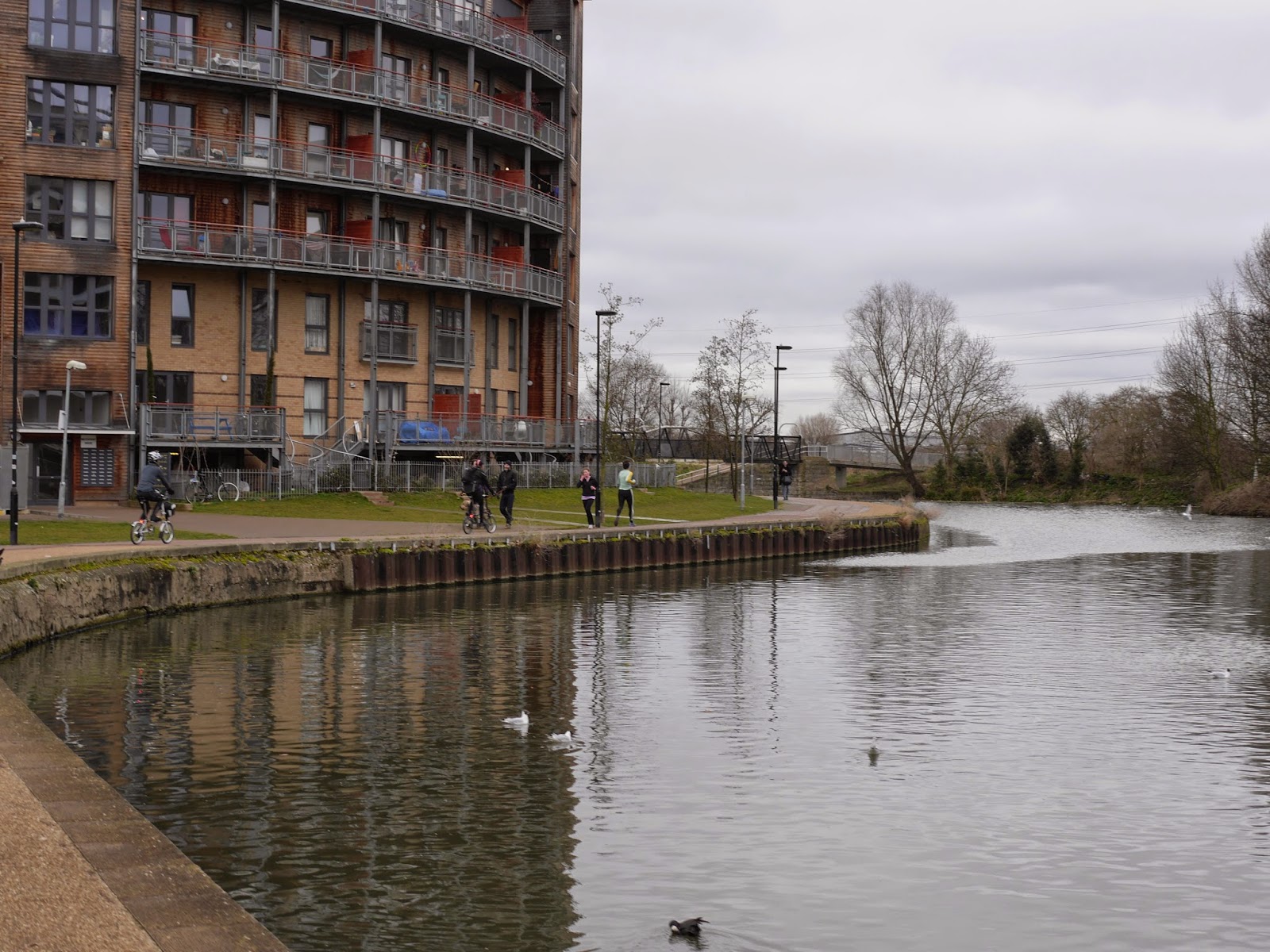 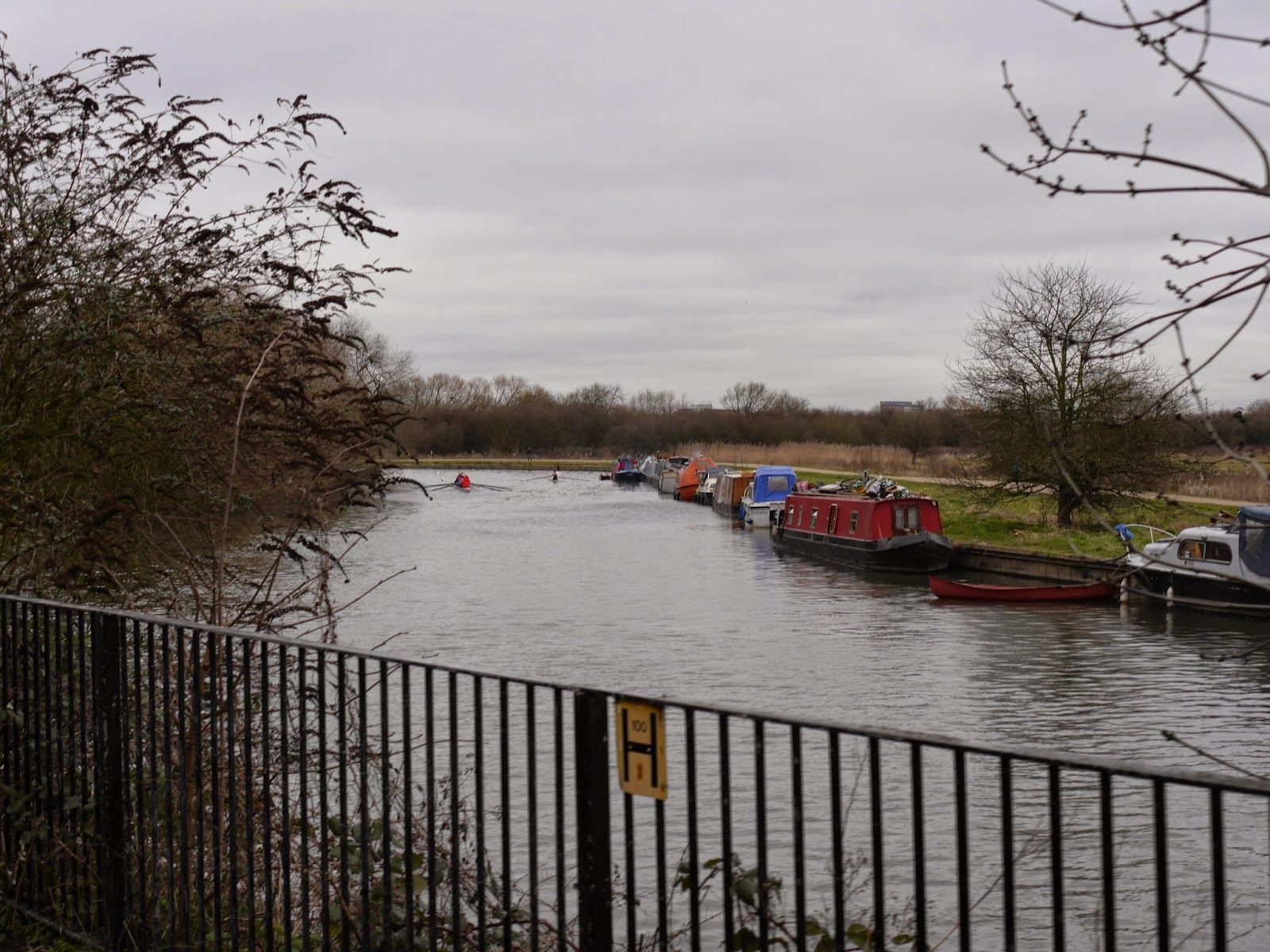 Every so often we stopped to either regroup, top up on water or have a snack. Rightly or wrongly I did not take any water with me for this ride and the only fuel I had was a small packet of Haribo included in an order from Wiggle. The way I saw it, 42 miles didn't require too much and we would be stopping for luncheon. 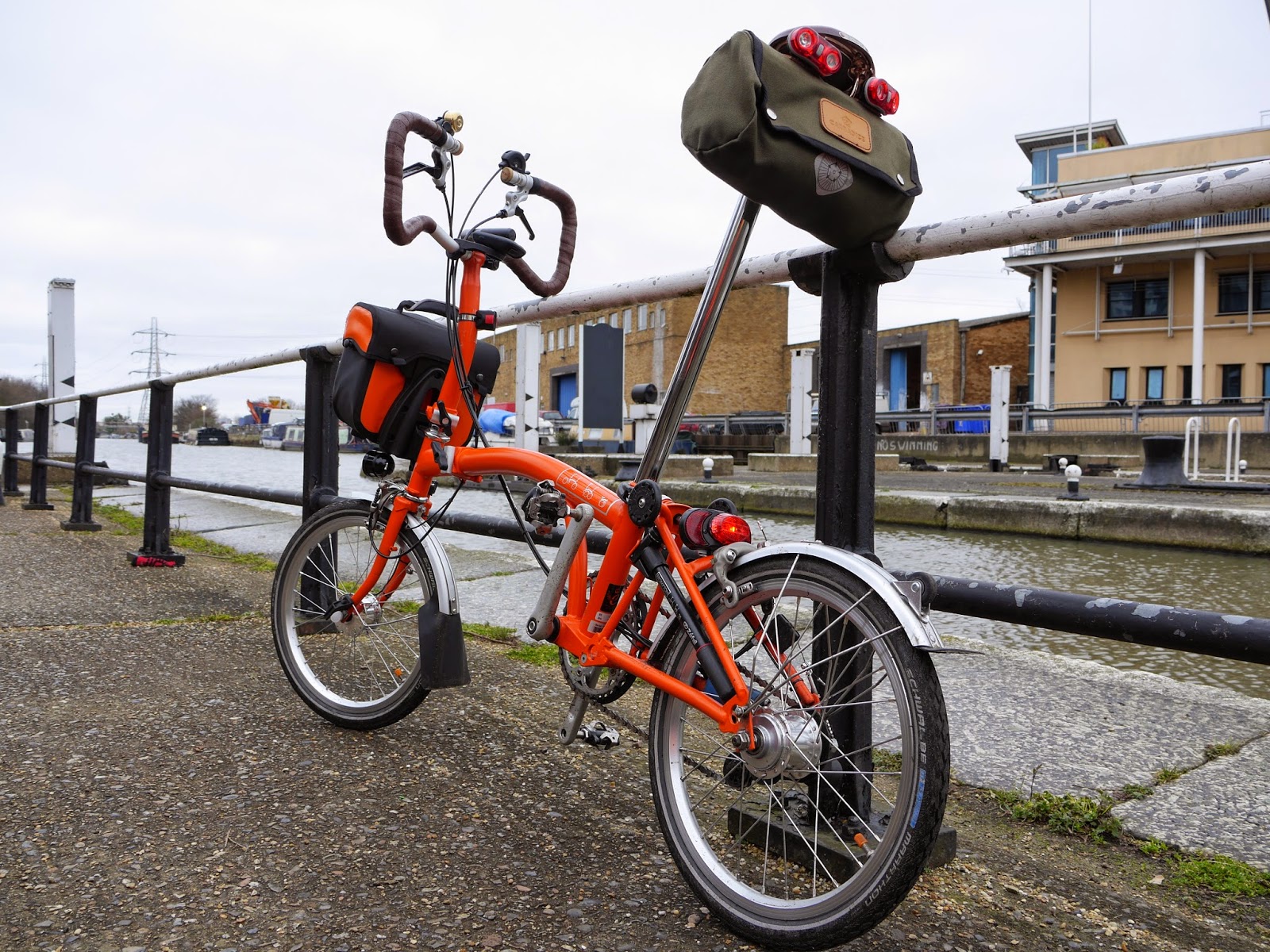 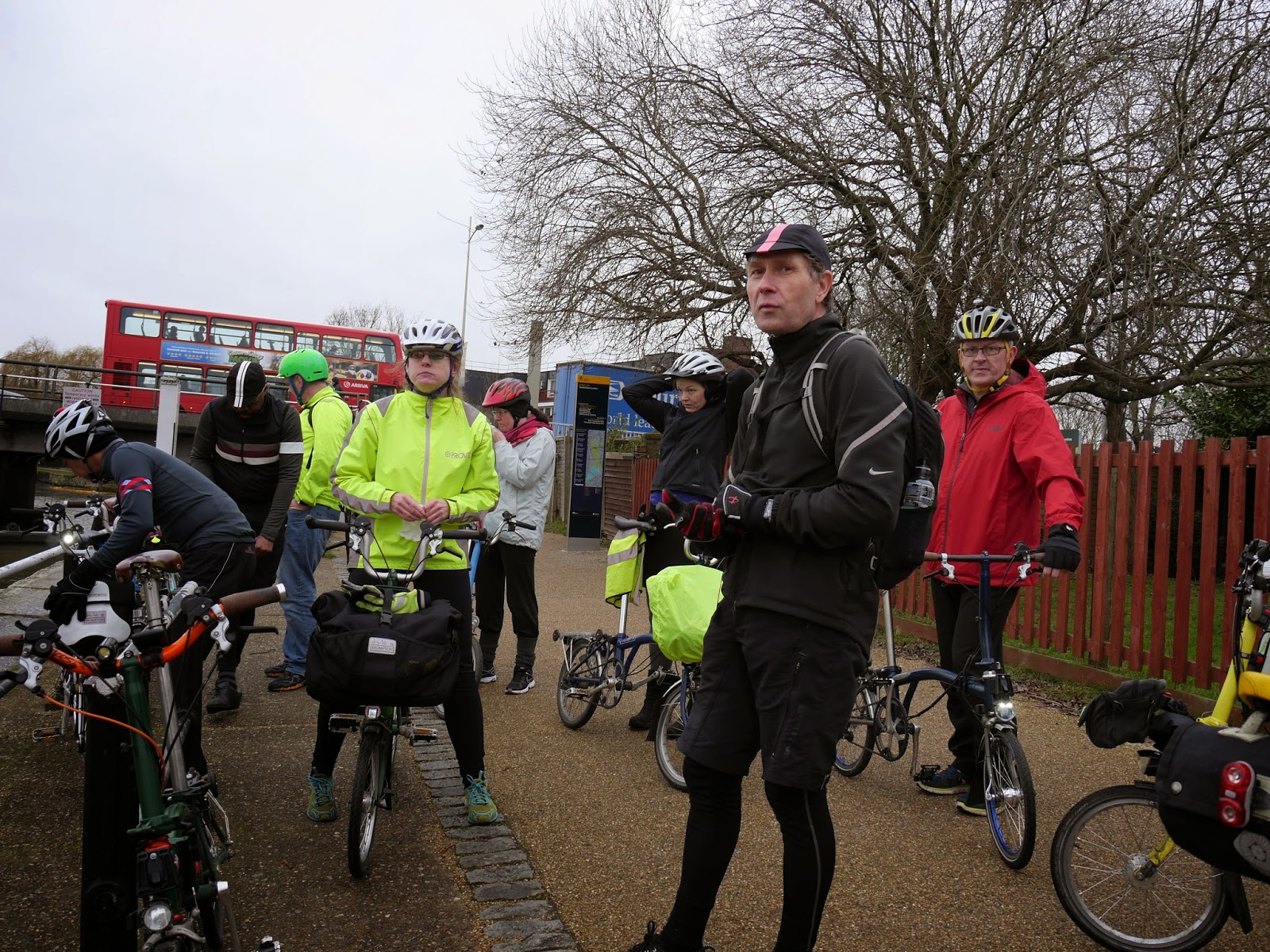 On one such occasion where we stopped my riding Partner, Andrew examined the wall of his rear wheel. Already knowing that it was wearing thin and with a replacement wheel on order, he looked at the bulge in metal wall. Sadly it meant his ride was over as it would be unsafe to continue. Luckily this discovery wasn't too far from where he lived. Taking it steady he managed to get home safely. 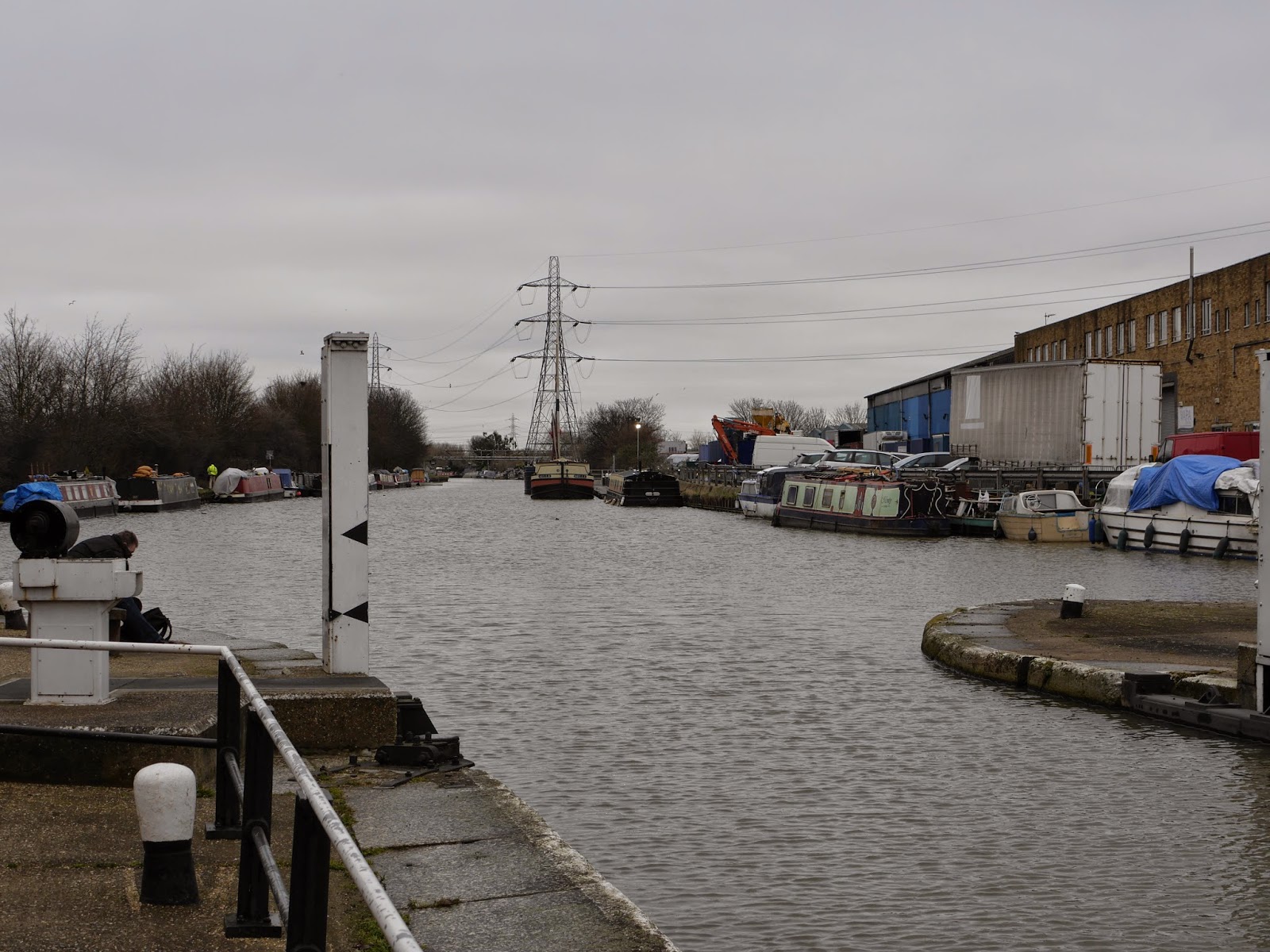 The drama wasn't over there. Now you'll have to pay attention to this next bit. A front wheel puncture was repaired with an inner tube donated kindly from Brian. When pumping up his own rear tyre it looked as if Brian had a puncture himself. While this was going on the front tyre which had been replaced was now flat again.

Taking it off it was discovered that the valve was faulty and letting air out. Perhaps its provenance was a little...dodgy? David, who was repairing everything in sight, now had a look at Brian's rear tyre and concluded that he didn't have a puncture at all. His Brompton pump was a little loose and thus caused air to escape rather that put it in.  With the tyre back on and pumped up, all was good in the world and we continued. 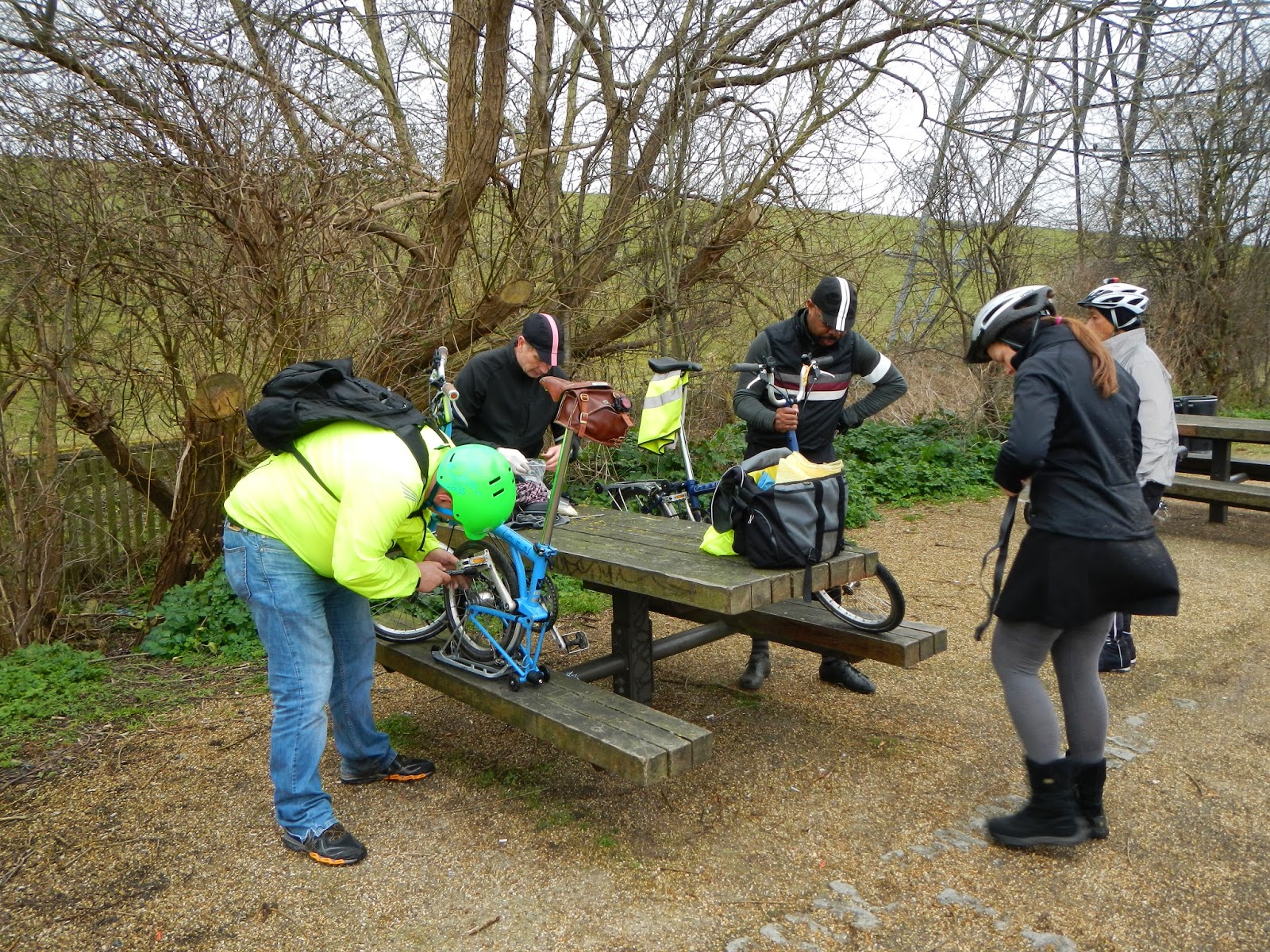 Onwards and upwards (well the upwards bit was to come later) we got closer and closer to Epping Forest. 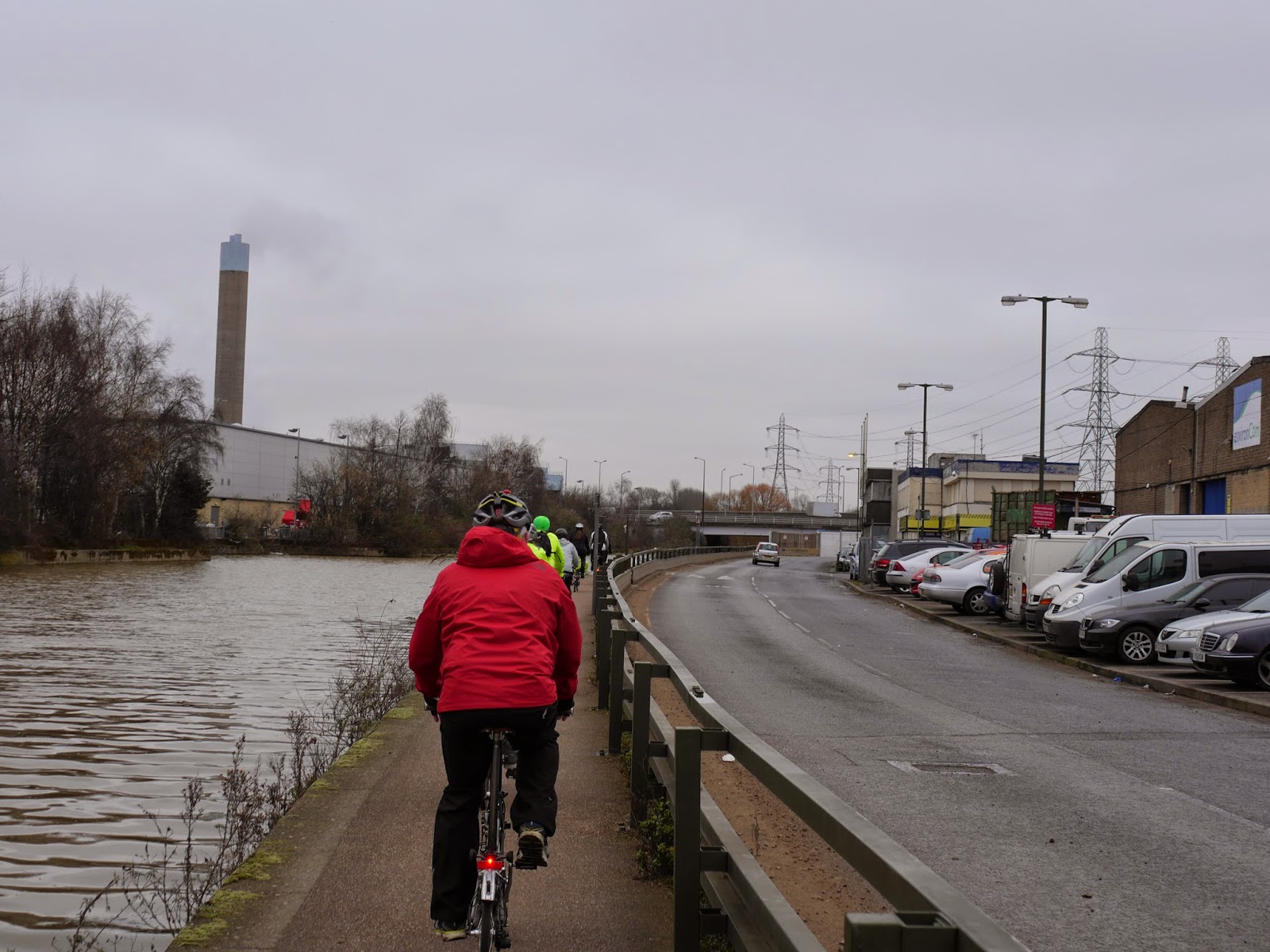 Epping Forest initially reminded me a little of Richmond Park but this soon faded as we progressed further in. Epping Forest covers over 6,000 acres and has had a varied history. In prehistoric times wild boar and beaver would have been common. There is evidence that the area has had continuous tree cover for well over 3,000.

Darker still there are tales of battles, witchcraft and ghostly apparitions. The notorious highwayman Dick Turpin supposedly roamed the area trying to evade capture. There is even a location called Hangman's Hill  where an apparition of a man can be seen. Terrifying screams are also heard there. (If you had of visited the area when we passed through, I fancy the screams might have been that of yours truly at the shockingly dirty state of my beloved Brompton). 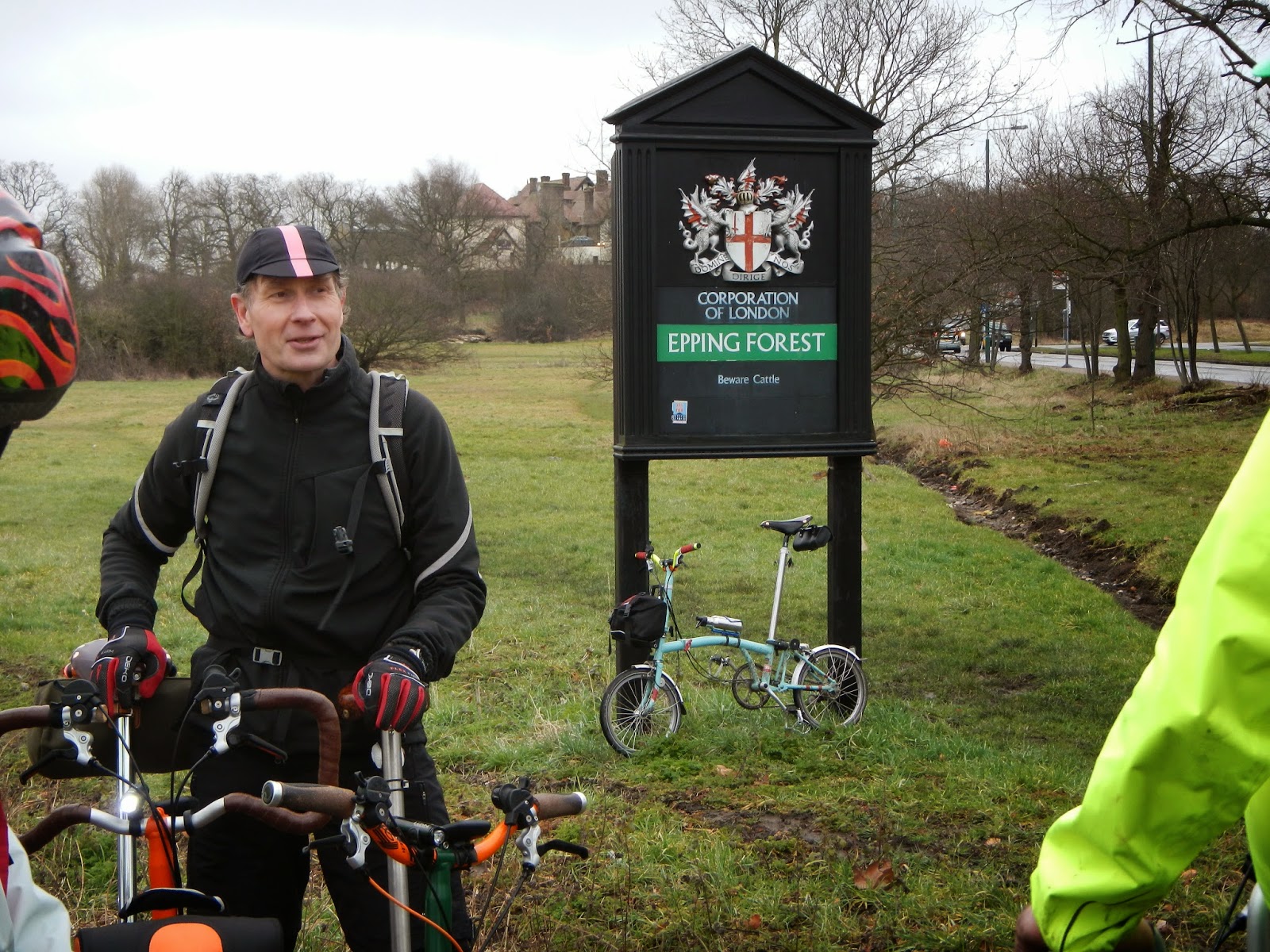 One of the draws for this ride was the chance to tick off one of the hills in the book, '100 Greatest  Cycling Climbs.' The hill in question was Mott Street. At the base we assembled for the obligatory photo before making our ascent. 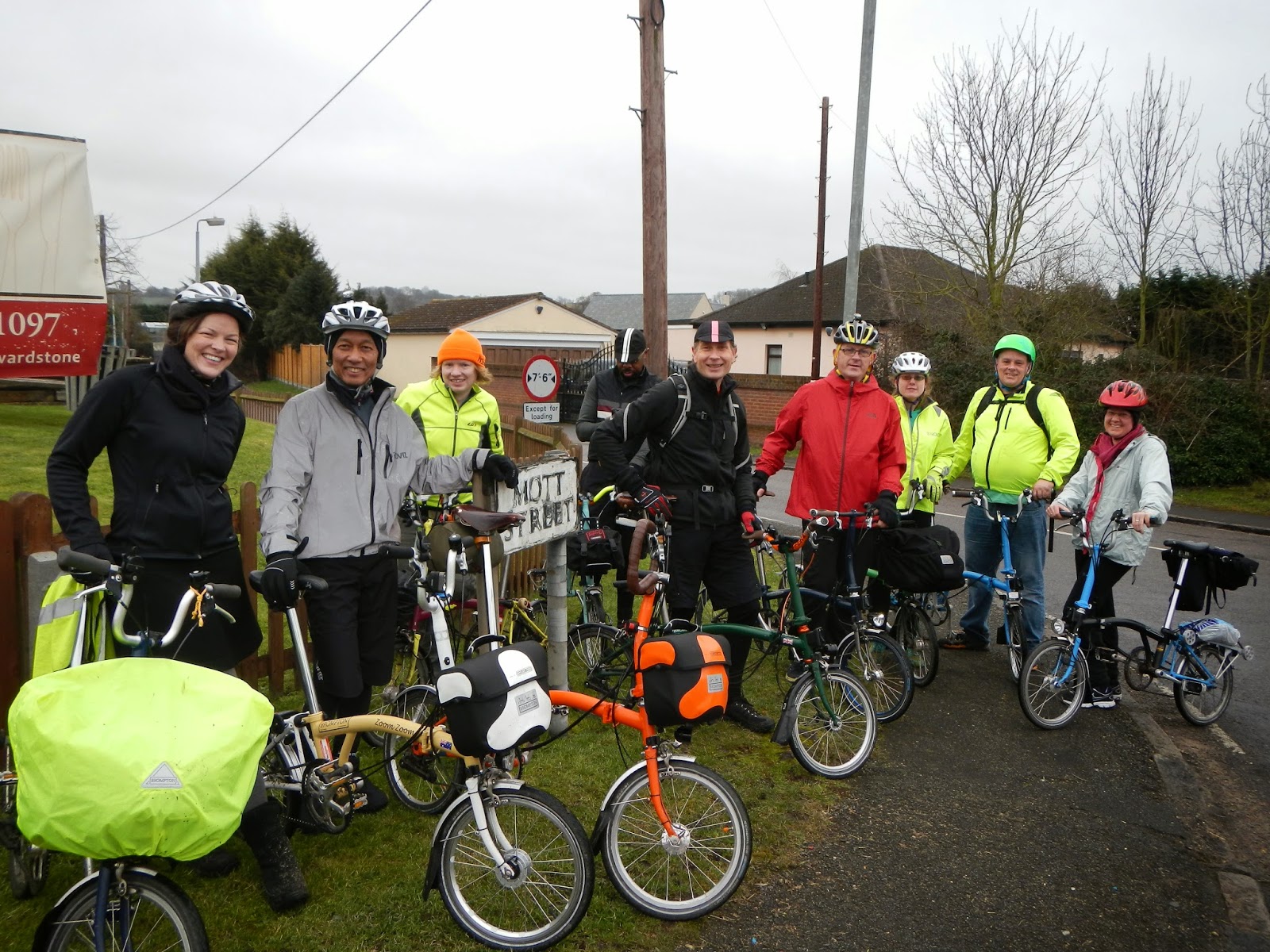 Mott Street is rated as 3 out of 10 in terms of difficulty and to put this into perspective Ditchling Beacon - which incidentally I will be attempting early Saturday morning - is 6 out of 10. Being 1,460 metres long, poorly surfaced and having a 12% gradient at certain points it would still be a suitable challenge.

I enjoyed Mott Street a great deal but would have to say it is no Ditchling Beacon and made my ascent pretty easily. David probably regarded it as a small incline, possibly along with Tony. It wasn't long until the others were at the top having enjoyed bonus that is a hill.

Cycling further through Epping Forest one got a sense of just just how large an expanse it covers. Cycling for ages it seemed never ending. We stopped at a small kiosk within the forest and were spoilt for choice. Graham, Tony and I chose the second of two kiosks and refuelled. They served generous slices of cake and I bought two of the Country Fruit Cake - one for immediate consumption and the other for the road. Sadly, the slice intended for the road didn't make it that far! 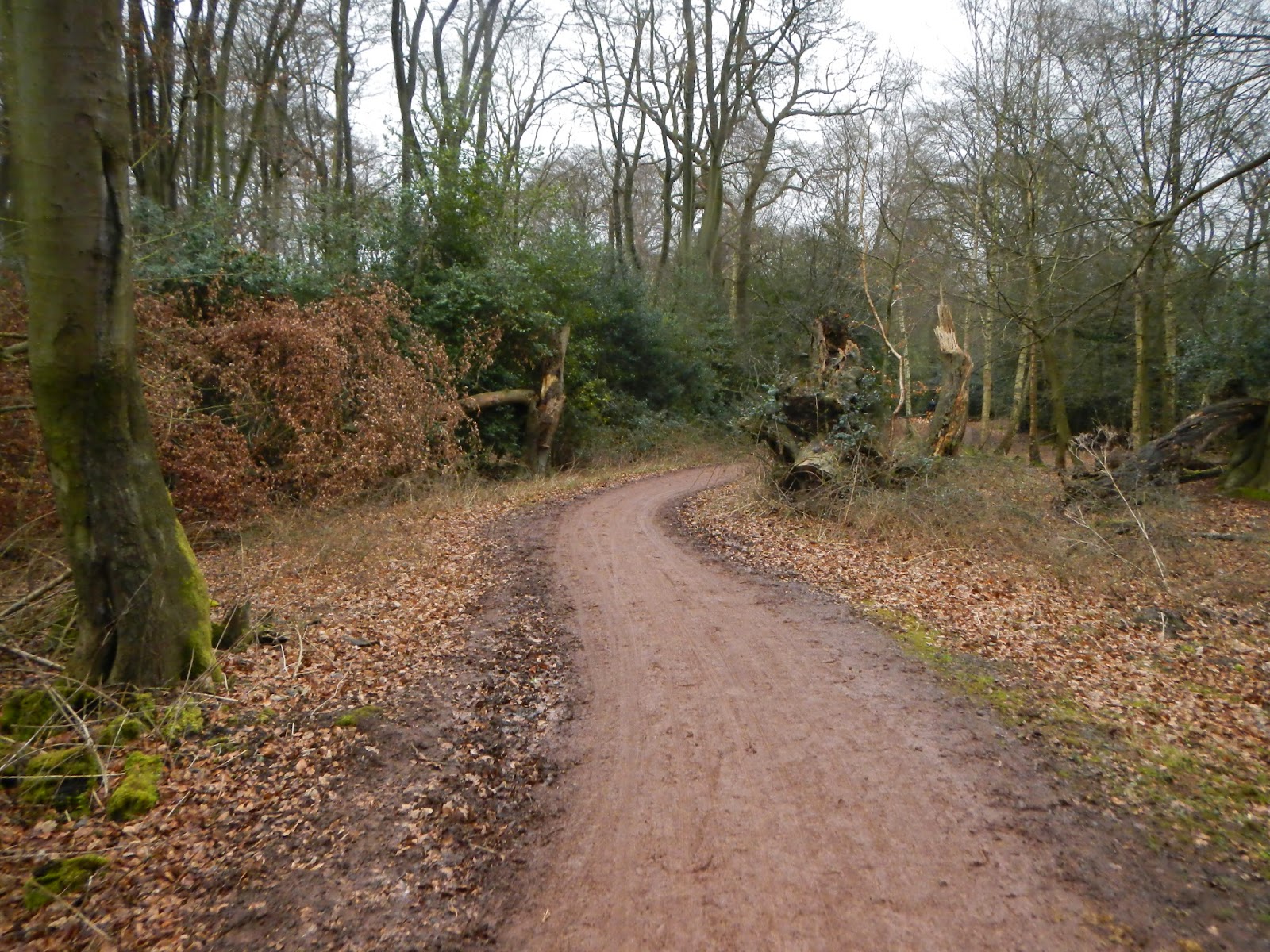 With comestibles eaten, we headed off again and exited the forest. Our route was blocked so we had to head out onto the open road. 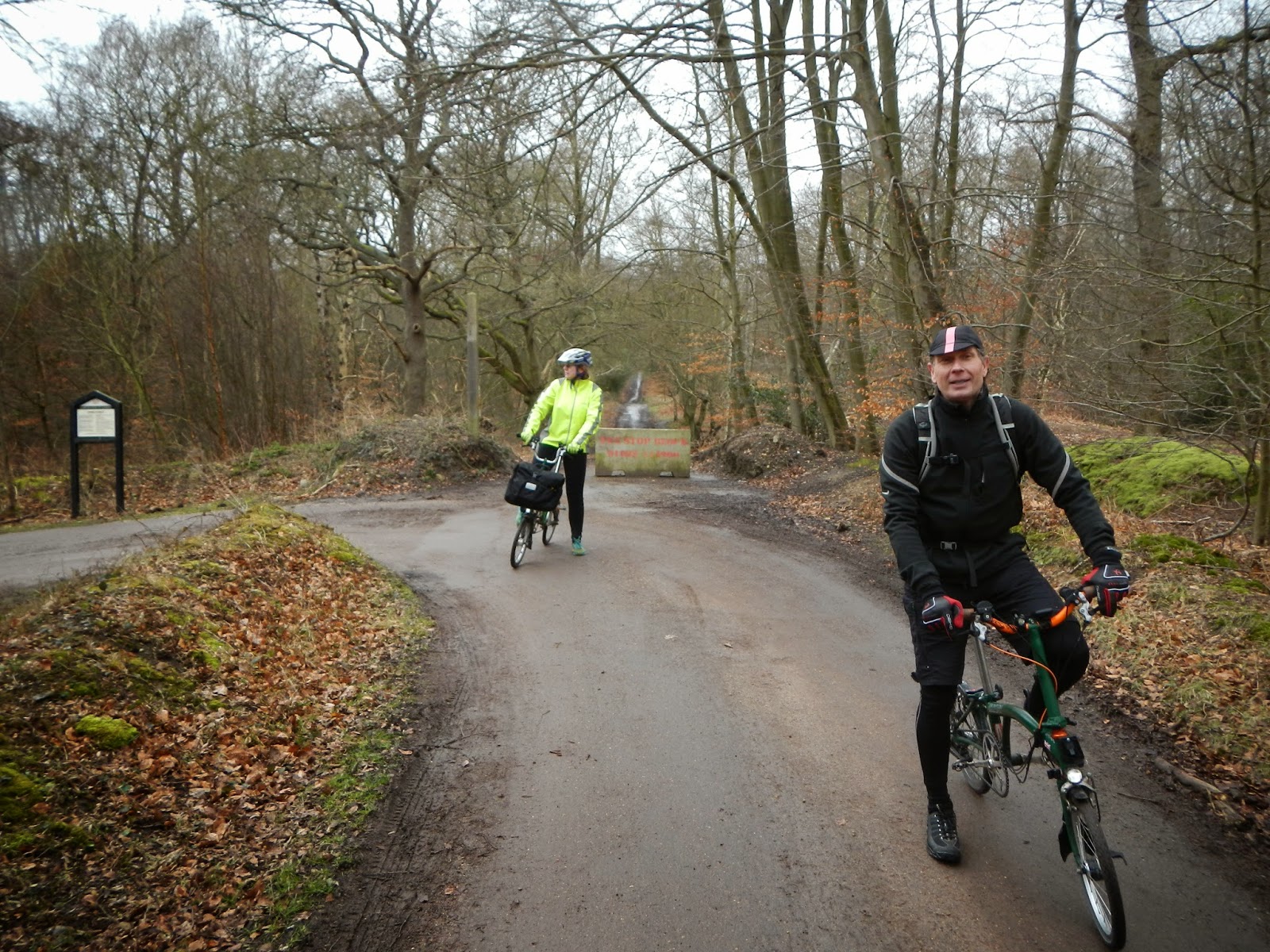 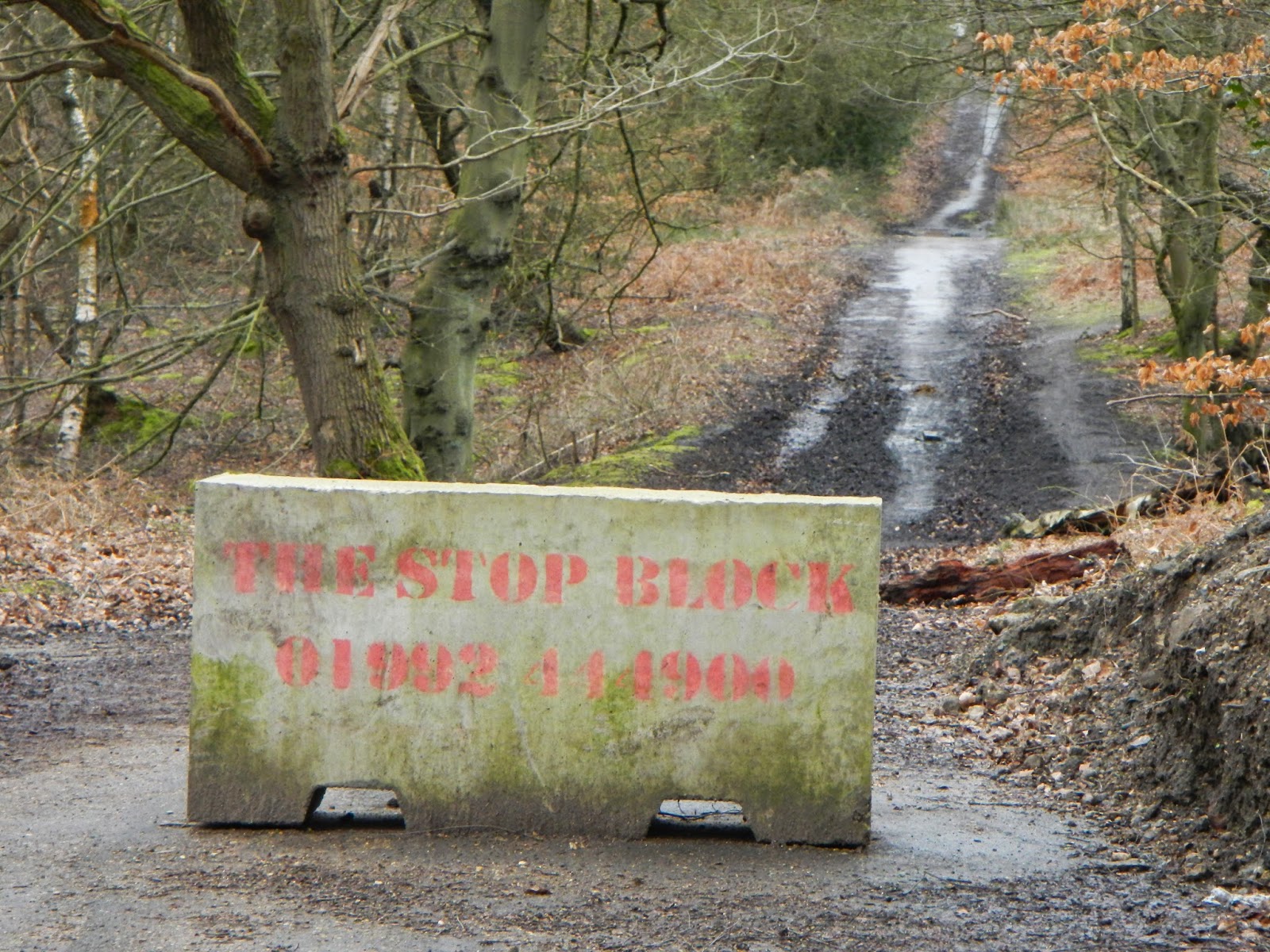 I do not know which road we cycled on but it was very busy and after a few miles cycling straight into a headwind I was glad to turn off onto quieter lanes. 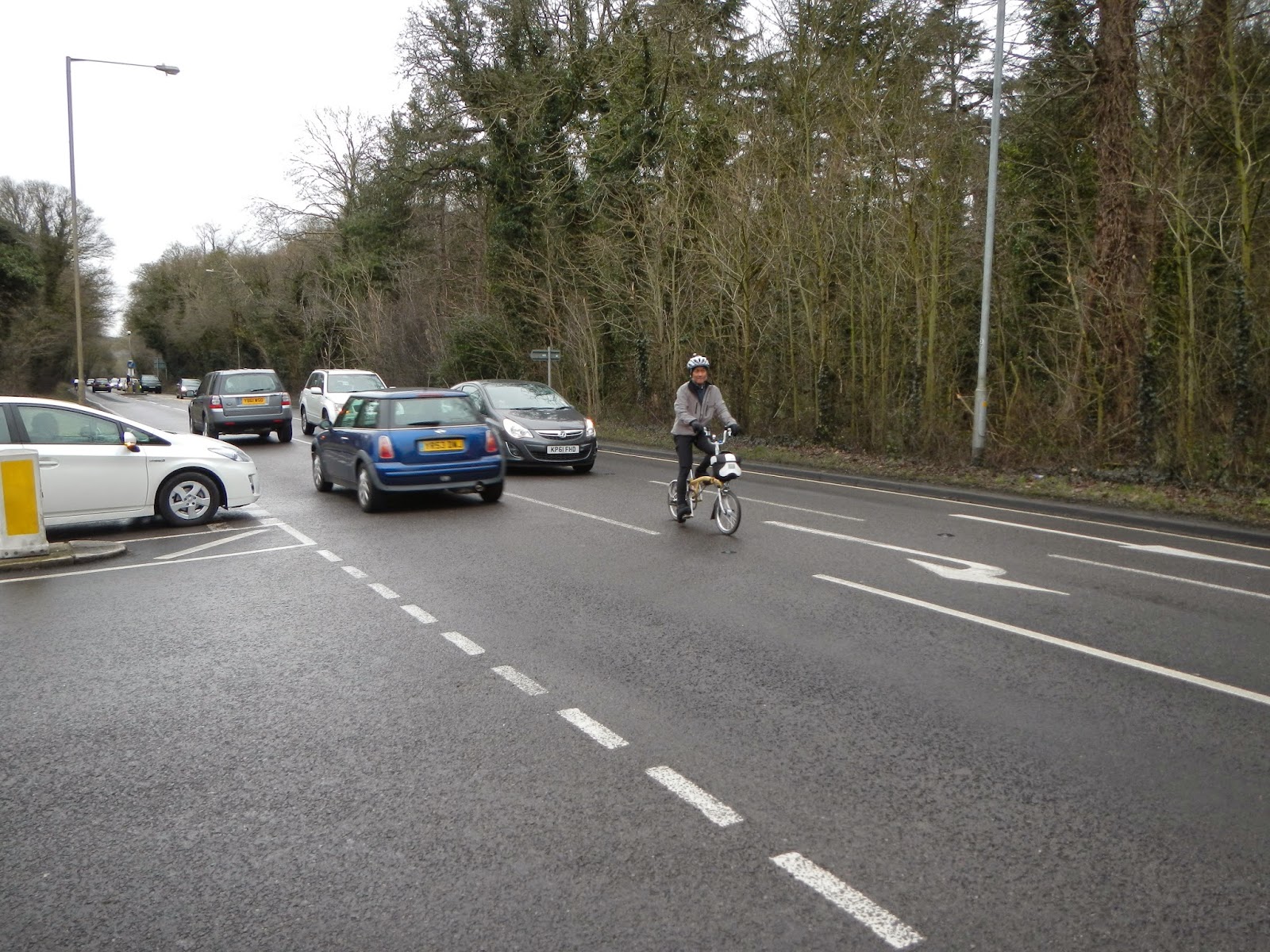 Our last glimpse of a really busy road was when we passed over it via a footbridge. After that it was either back to quiet side roads or canal tow paths, which was welcome. 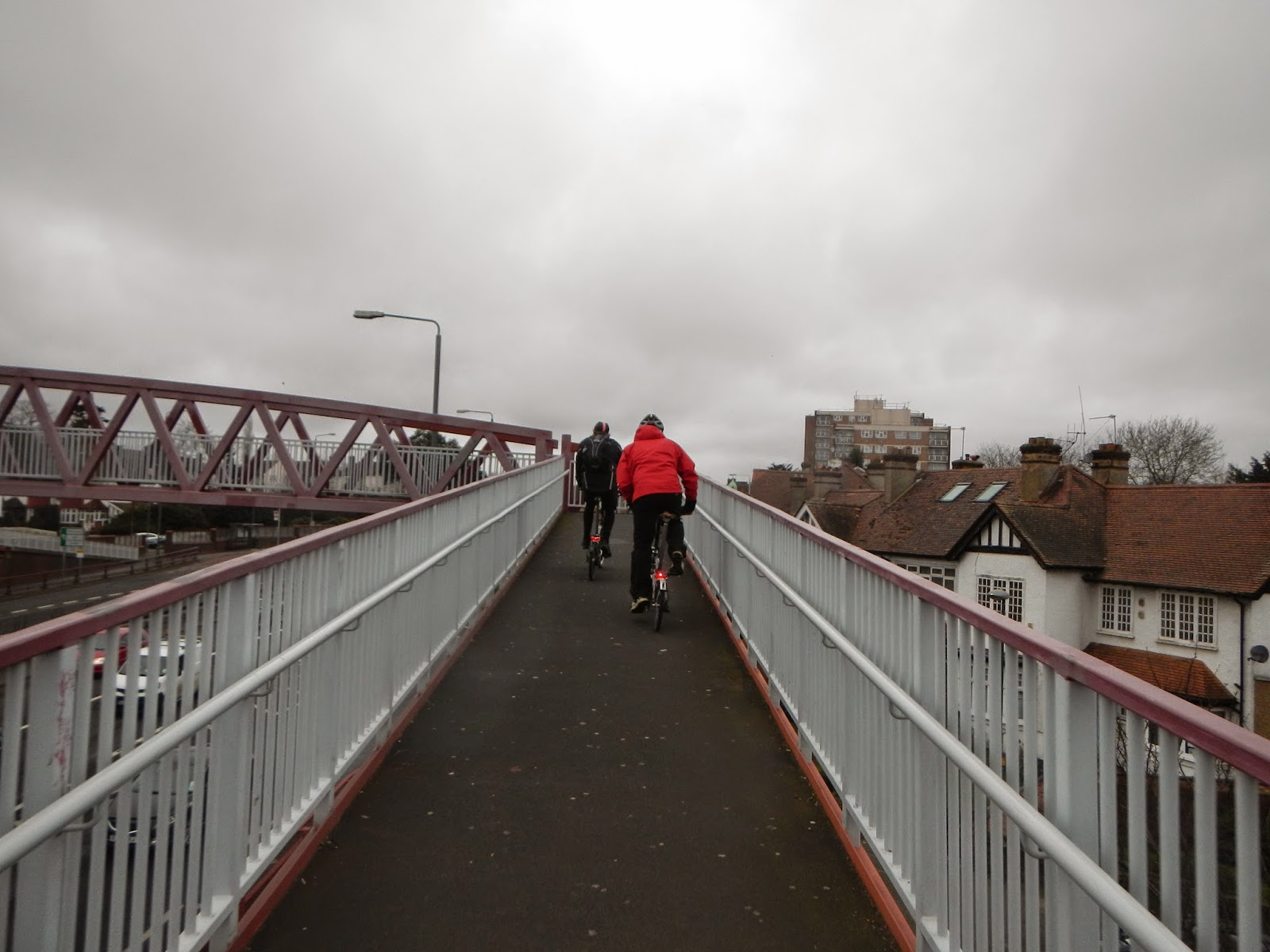 Sooner than expected we reached the familiar sight of Canary Wharf and the river Thames. This was reassuring as it meant we were almost done. At the London Eye we stopped briefly for a photo before saying our respective goodbyes.

This was a great little ride. I clocked up just over 42 miles but I clocked an additional 14 miles to the start and from the finish. I enjoyed the ride greatly and liked the varied scenery and the fact it was more than eventful. 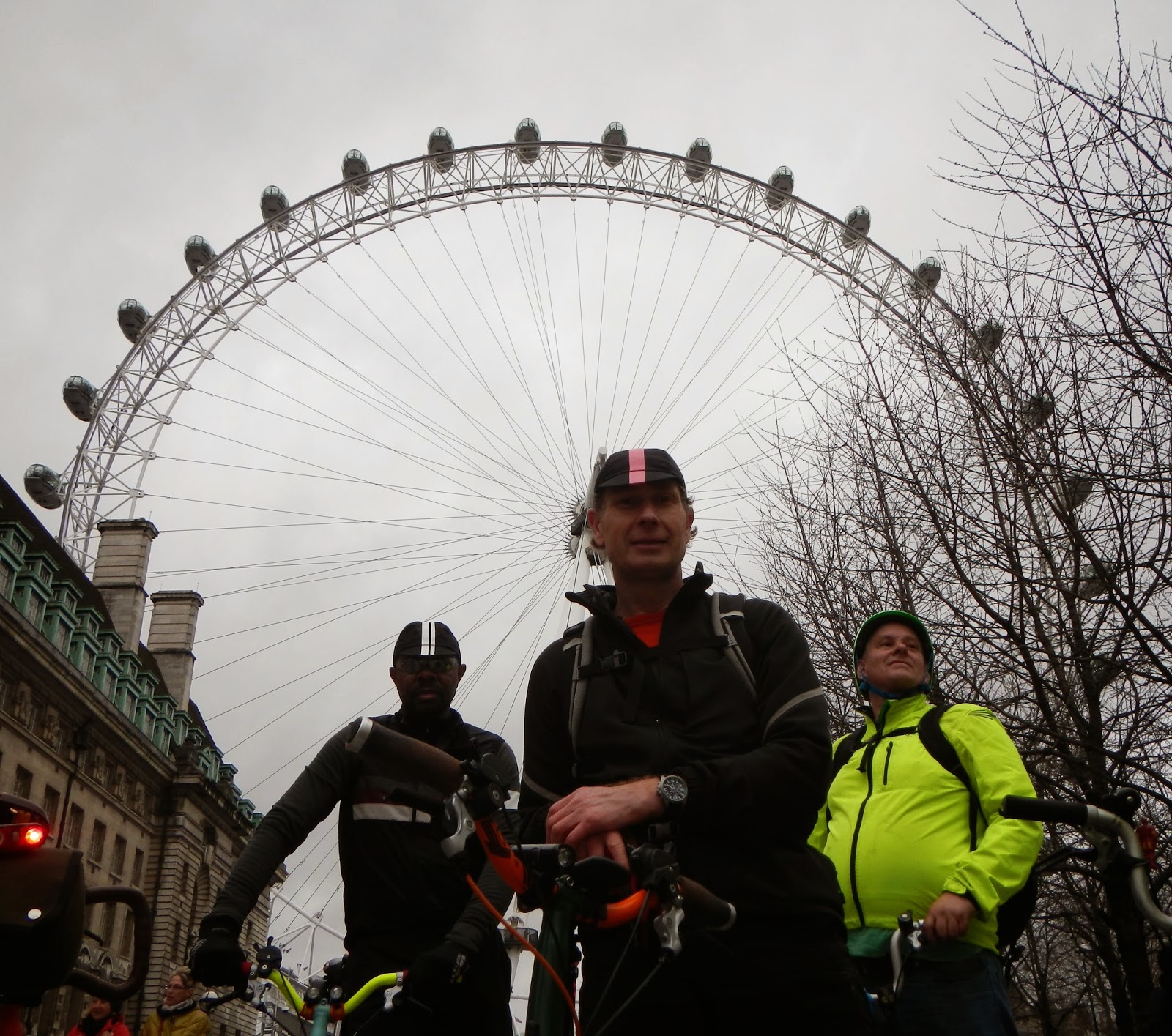 As always thanks to David for leading another great adventure and to my fellow Bromptonians. The map and ride data can be viewed by clicking on the link below.