The St Crispin's Day night ride has been around for a number of years but this was going to be the first time I took part.

It is a unique ride insofar as it takes place on the weekend where the clocks go back an hour - essentially for daylight savings purposes - and this hour change means that one actually gains an hour and you go back in time. So if you finished at 10:00 with the change it would be 09:00. St Crispin's Day is a day most famous for the battles that took place on it - 25th October - the most famous of which being Agincourt in 1415.

Being 100 miles it should have been in my thoughts the proceeding week but having done lots of night rides in the past, I felt quite confident. Looking at the route - which was essentially flat - it didn't really hold a great deal of fear or trepidation but 100 miles is 100 miles and needed to be respected.

As so often on big rides I arranged to meet my Partner in Crime Andrew at Hyde Park Corner under Wellington Arch. We would then cycle to the start about 30 minutes away. Also around were Jenny, Samantha and a few other brave souls. We made our way excitedly through the still busy London traffic to the start at a boathouse in Chiswick.

I don't think Andrew would mind me writing that he was a little nervous about this ride. If he competed it successfully it would be his longest ride and his first 100 miler. I had every confidence in him and knew how much this meant to him. Would he do it?


We signed in an got our special St Crispin's Day hats and passports. The passports would allow us to get food at the various stops and be stamped at certain points to prove that we had clocked in as it were.

There were quite a few Bromptonians out in force - which was a great sight. One bike in particular - not a Brompton was being ridden by Brompton owner and gent Tony, caught my eye. It was a Pashley Guv'nor. I have always admired these bikes from afar but seeing one in the flesh made me want one. It was a stunner and I was drooling over it for 99 of the 100 miles!

Before long the familiar faces of David and Anne came into view and Anne wasted little time in distributing some rather fine flapjacks she had made!! We waited for the stroke of midnight for the off. It came and with little fuss, riders started to leave for the adventure that lay ahead.

Our little group of Bromptonians started to thin out and near Buckingham Palace we regrouped. Rides of distance inevitably do this and everyone lives at a pace they are comfortable with. David was chief navigator. I have to say that the signs the organisers had painstakingly placed at strategic points were useful but nothing compares to the navigational prowess of David. 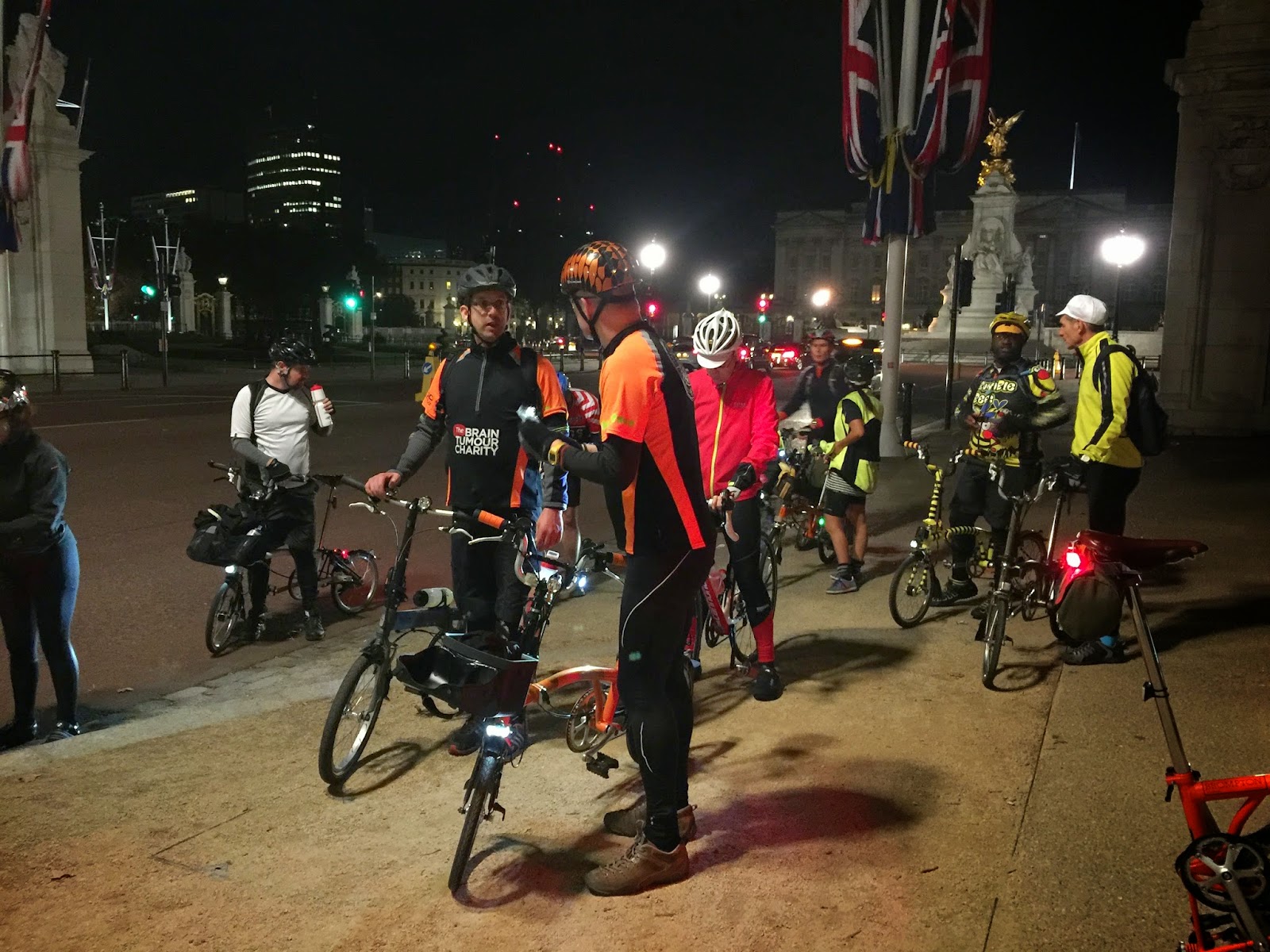 David set a blistering pace. I had been worried that it might be a slow 10ish mph pace but David certainly had other ideas. It was a pace I liked. I was not sure we could sustain it but we were already averaging over 13 mph. This meant that the inevitable, where the group thins out was going to and did happen.

My Partner in crime was on the pace for well over 20 miles and was looking supremely confident. Would he be able to keep it up?

By the time we had reached the outskirts of Windsor the group had thinned considerable. At Eton we stopped on the bridge over the River Thames. As I gazed out at the river I saw a swan with its head tucked in, fast asleep and floating along. It was quite surreal. This was magnified when another two swans floated out from under the bridge doing the same.

Further up were some bins and shrutting along was perhaps the biggest rat I have ever seen nosing at the discarded rubbish. My first instinct was that it was a cat! As we set off and passed said bin, I was extra cautious. If that rat had of come anywhere near me, I would have surely showed myself up!

It was a warm night and I had a hard time believing that it was the end of October. This served to make things more enjoyable. I fancy the ride would have been an altogether different experience in the wet! My Proviz 360 - the ultimate night riding jacket as far as I'm concerned - had to come off as I was starting to overheat due to the mild conditions.

David continued his brisk pace. We missed the cake stop as we could not see hide nor hare of it. After a quick rest we pressed on. At about 65 miles we reached the main stop where we would be able to pick up a special bottle of St Crispin's Day wine. We also got a hot meal - a rather tasty chicken stew. This I ate with enthusiasm.

Sadly it meant we had to say goodbye to David who sensibly was going to wait for Anne. With Chris taking over the role of navigator we said our goodbyes and were off.

Our pace didn't really change a great deal and we were now averaging a far from shabby 14 mph. We cycled along in a purposeful peloton and I would be telling a falsehood if I wrote that it was not satisfying passing several roadies in full lycra on lighter bikes, with more gears and a greater price tag. I feel we certainly did our bit to show just what a Brompton could do.

At 88 miles we reached the cake stop that we had missed the first time round. Our average pace had moved slightly to 14.1 mph and it was to stay at this level overall for the entire ride.

The last few miles had a few hills. I write hills but they were more like inclines. I suspect after competing so many miles up to this point, any incline felt harder than it should. Pressing on we reached Richmond. At exactly 09:28 I passed the 100 mile mark. (Officially with the clocks having gone back it was 08:28). It was not long now until the finish.

With the back of the ride broken we reached the road leading to the boathouse and with 102.43 miles recorded we...I had done it. It was 09:38 (or 08:38) and after getting my passport officially stamped I could finally state that I had competed the St Crispin's Day Ride and clocked up another 100 miler.

With the queue for the bacon roll quite long, like Chris I decided to head for home. Using google maps and my iPhone I navigated my way successfully without getting lost. With my journey to Hyde Park Corner, the start point and my ride home, I clocked up over 128 miles - the highest tally yet. My ride home was very slow but more because I was studiously listening to the spoken directions than feeling fatigued.

As for my Partner in Crime, did he complete the 100 miles? YES!! I was happier about this than I was about doing it myself. I knew he could do it!!

This was a highly enjoyable and well organised event. Special thanks to Rob and his team at St Crispin's Day Night Ride. They were friendly, helpful and everything just worked. Thanks as always to David for his company and navigation, Anne for her flapjacks and Chris for the navigation for the last 35 miles. Many thanks to those I rode with too.

Would I do this again? Yes! If I could sign up now for next year I would. I didn't find it overly taxing for 100 miles but this was a good thing. I will definitely be back next year!