I had been looking forward to this ride all week. The idea came from fellow Bromptonian Andy L who had heaped high praise for his North Kent coastal ride. David put out a few feelers for whether people would be interested in following in the cycle wheels of Andy.

The meeting point was Victoria Stattion, from which we would travel on the 08:52 to Faversham. My journey to Victoria took me through Hyde Park. As I cycled along, more or less with the cycle path to myself I spotting members of the Household Cavalry on horseback trotting along looking resplendent.

Arriving at the station in good time I retrieved my pre-bought ticket from the self service machines and saw David, Anne, Luka and my partner in crime Andrew already there. Graham followed shortly after and after a few last minute purchase from various concourse outlets we boarded our train.

We manaaged to get good seats, thus allowing us to happily chew the fat and catch up. The journey was over an hour but your would not have know it.

We arrived at Faversham where we were greeted by Ivo, John and his friend. Almost immediately we headed off into some glorious October weather. In fact it was hard to take in that it was October. Many took off a few laters quite quickly as even at just after 10:00 it must have been 15-16 degrees.

As we cycled along from Faversham I recognised the route and started seeing familiar houses and landmarks. I was familiar with it as I have cycled here when on the several London to Whitstable overnight rides. With those I would have been cycling along at 06:00 in the a.m. after sum 65 miles from London and with tired legs. This time I was fresh and seeing things in a totally different light. More than a little strange.

Whitstable was a hive of activity. Lots of people milled around buying oysters, ice cream, fish and chips and other seaside comestibles.

The small harbour had lots of boats and the sound of seagulls calling in the distance and the smell of sea air and fish confirmed whole heartedly that one was well and truly at the seaside. 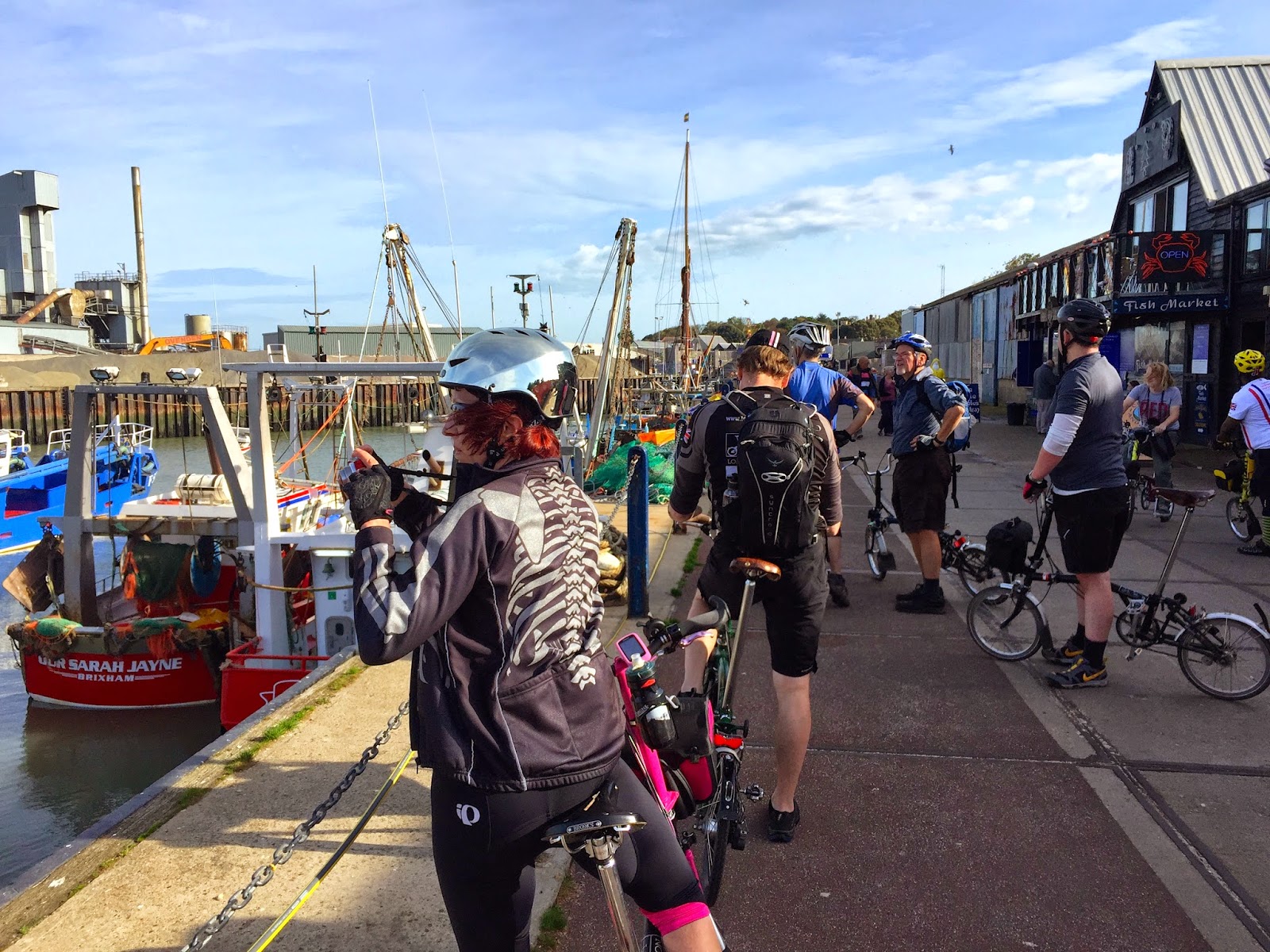 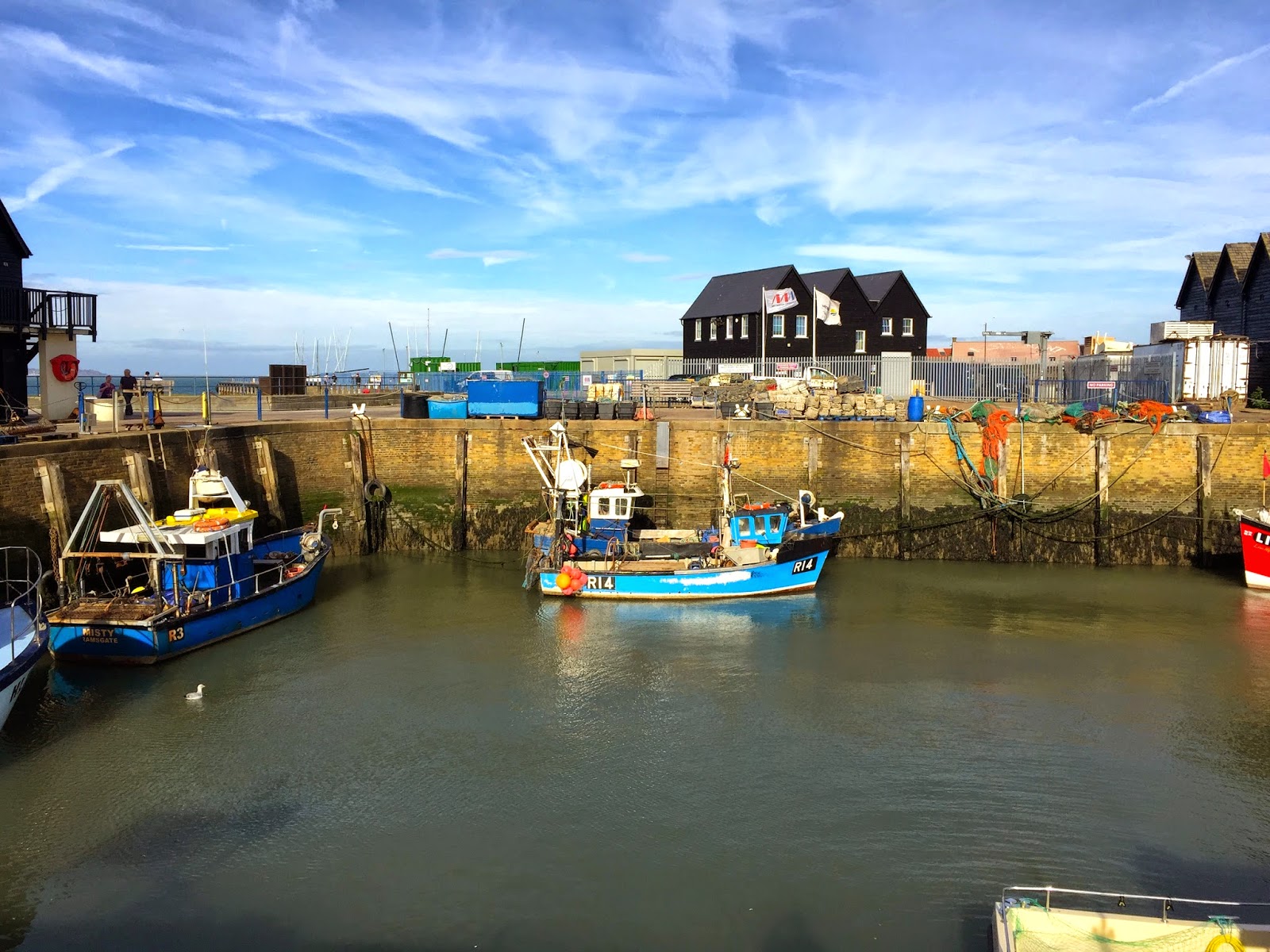 As we travelled away from the centre of Whitstable we again saw lots of painted beach huts, very much a feature of many seaside resorts. Some of these change hands for incredible sums considering they are only the size of a modest garden shed! 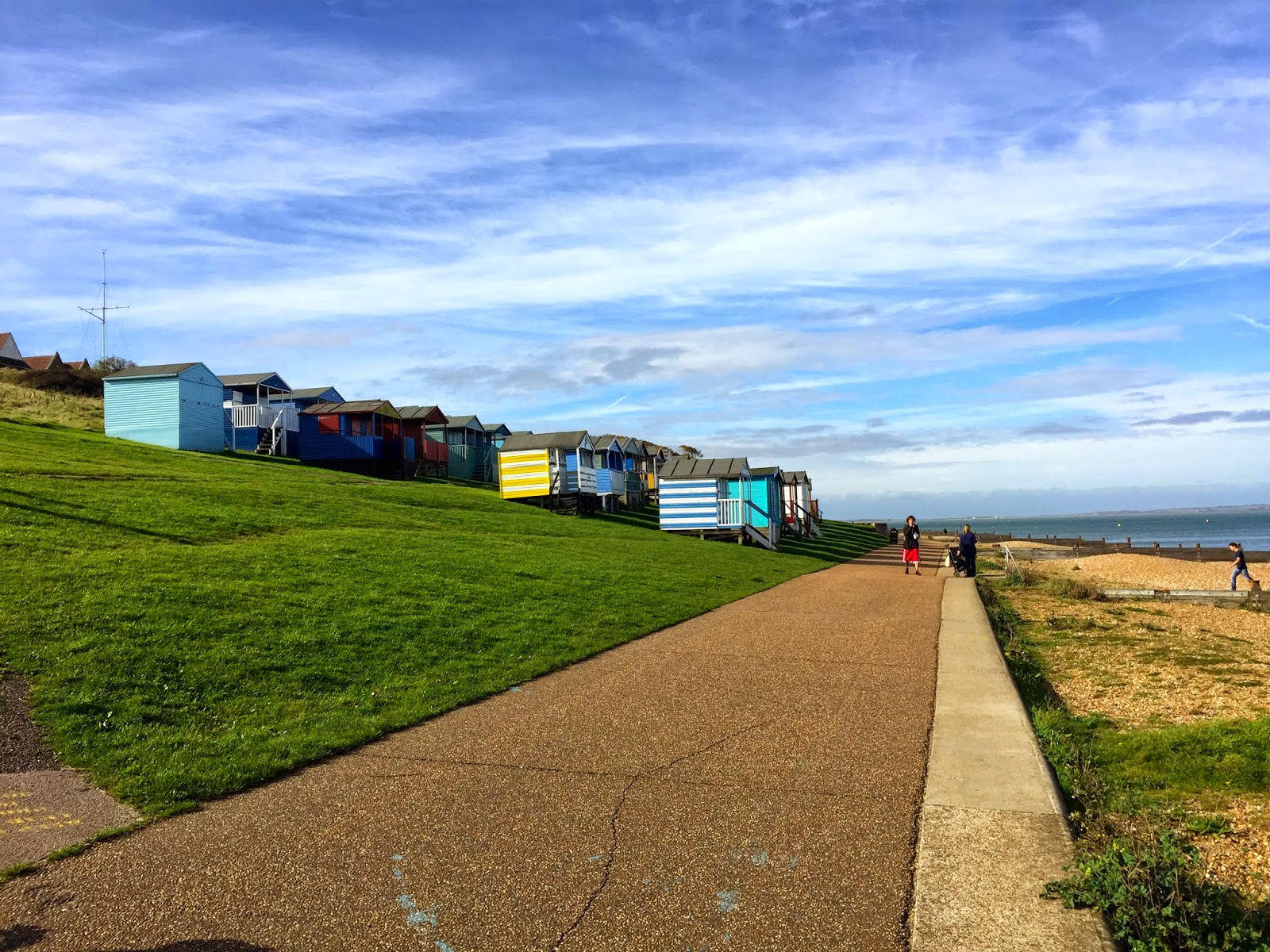 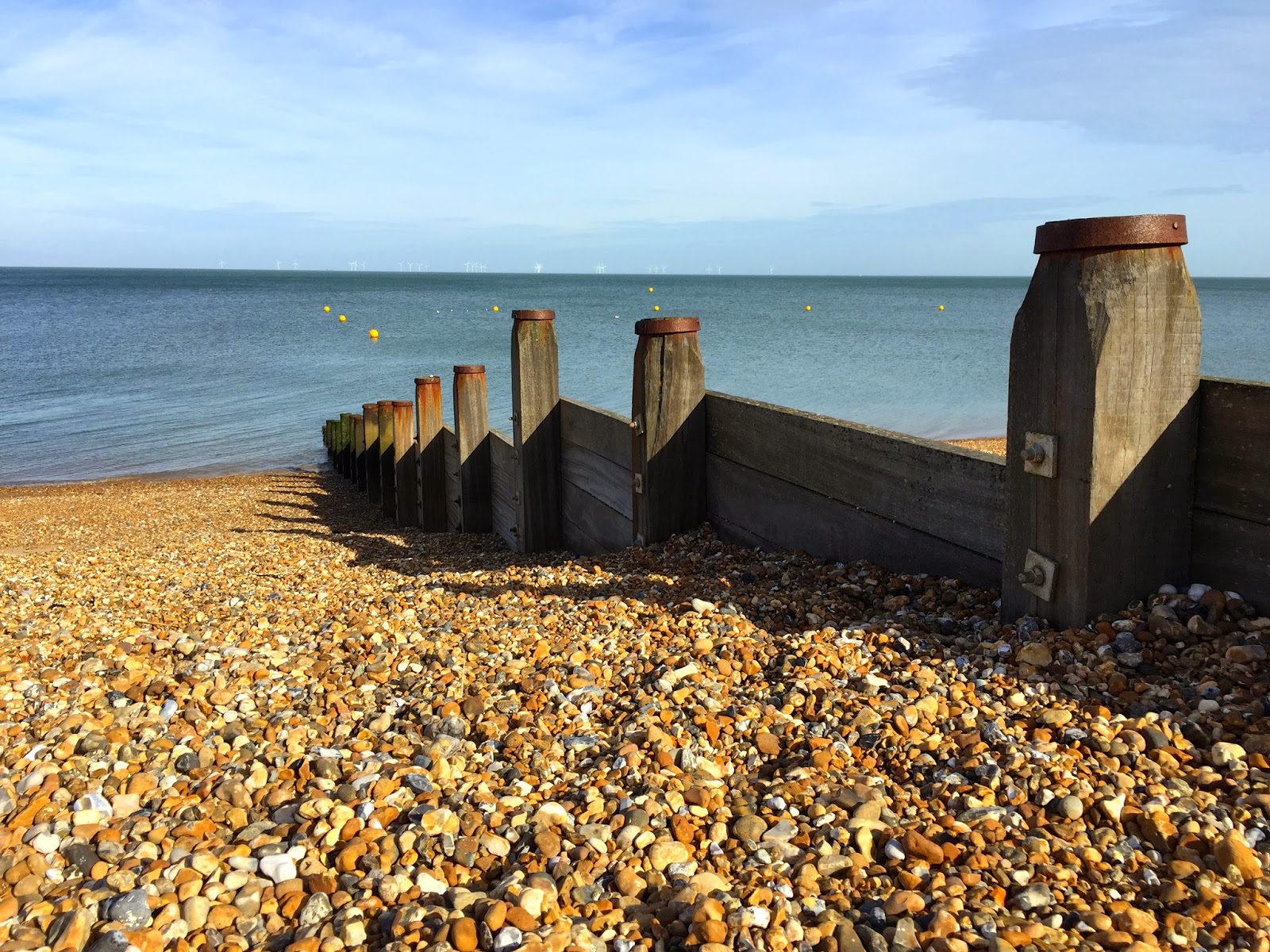 Another feature of this ride was that the coastal route we followed was all by devoid of cars. This was  an added bonus and something of a luxury. If course one had to be careful but it meant we could all enjoy the scenery, which I have to report was stunning. 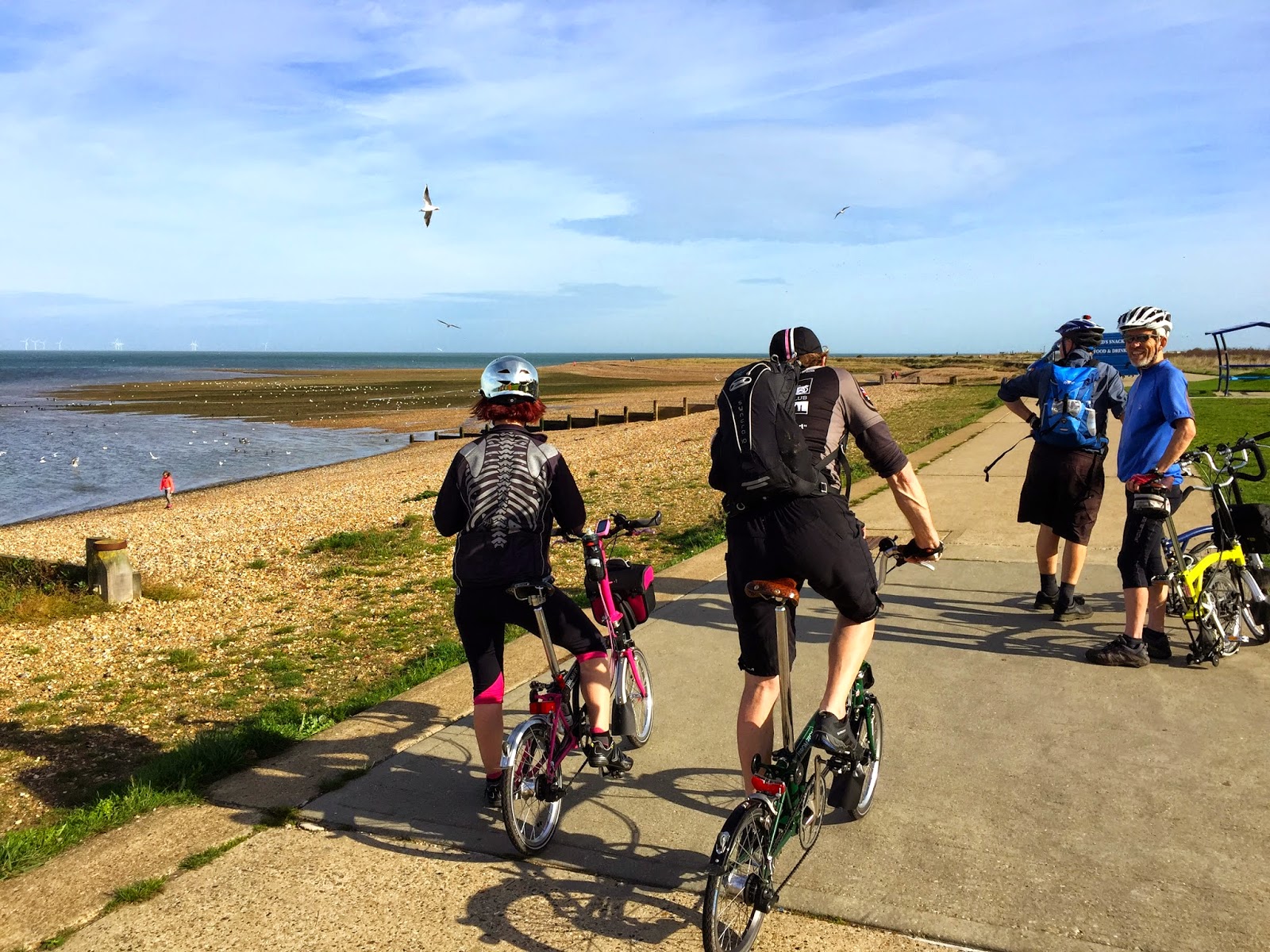 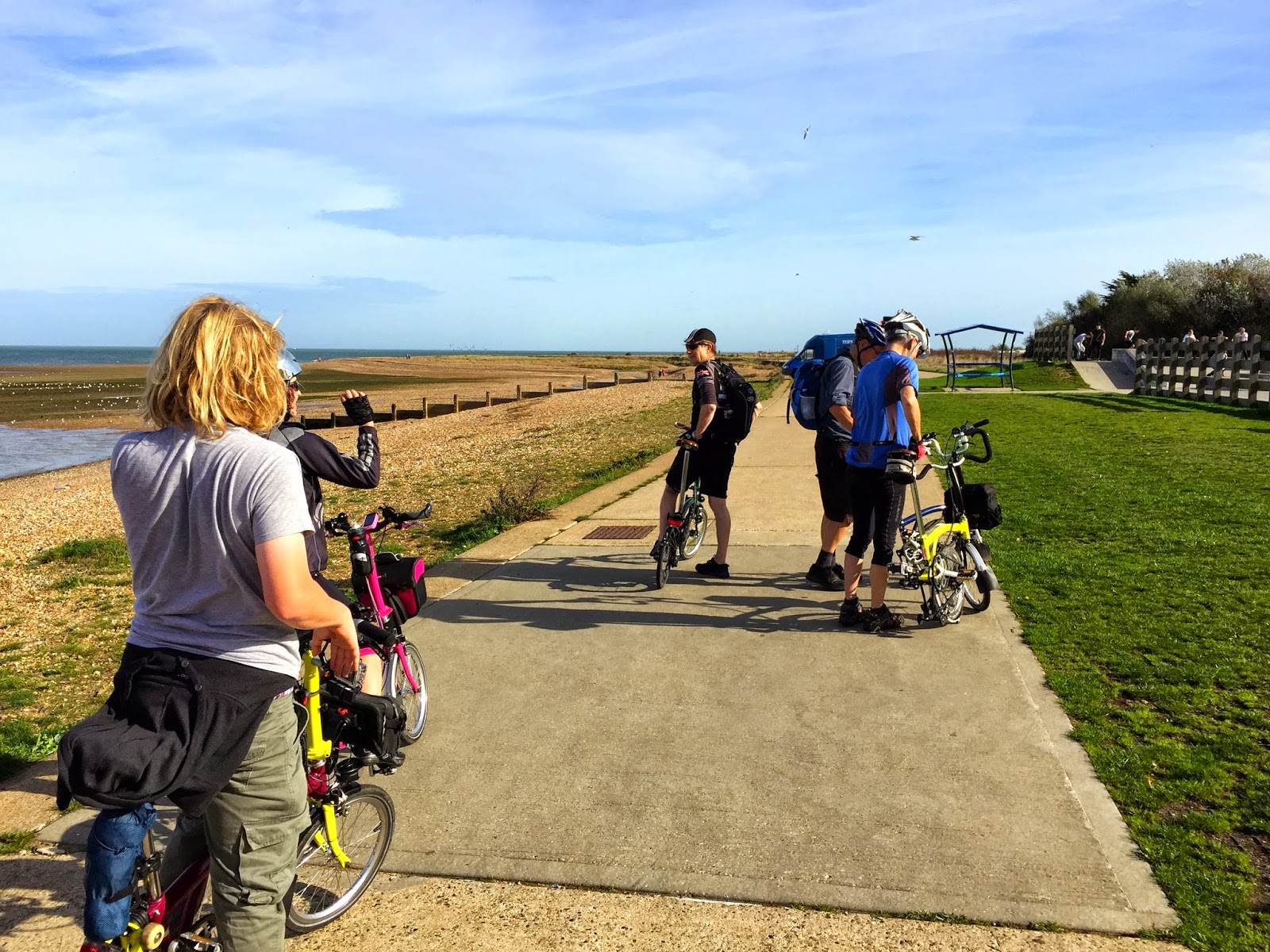 We passed through Hern Bay, which didn't have much to attract us. Remains of its pier could be seen which was destroyed by a storm in 1978. I will have to consult my parents but I am all but certain I visited Hern Bay and its pier as a child but I could be wrong. 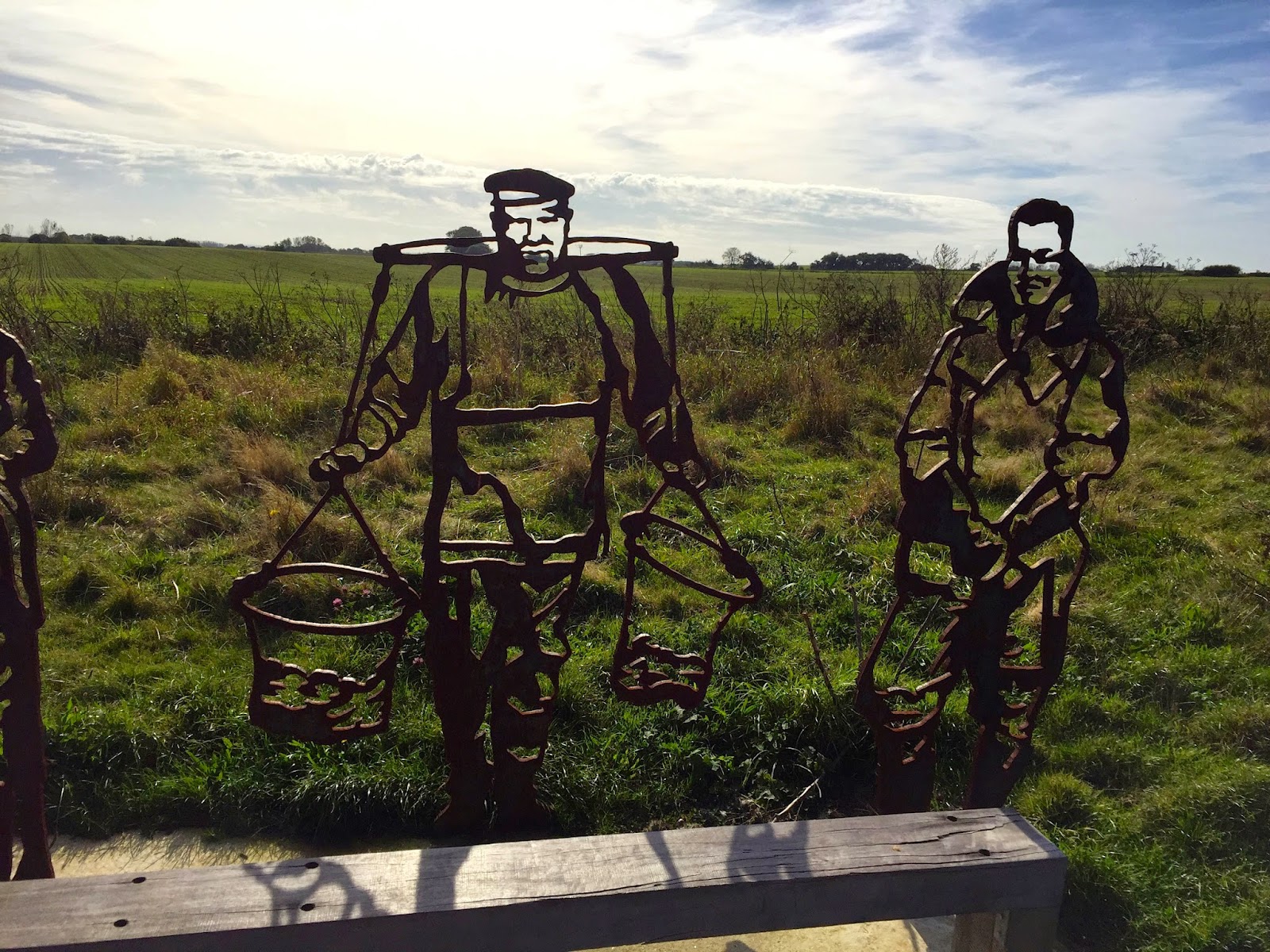 As we cycled further still we saw the imposing towers of St Mary's Church - or what is left of it - at Reculver. It could be seem from some considerable distance and was an easy draw for all of us. 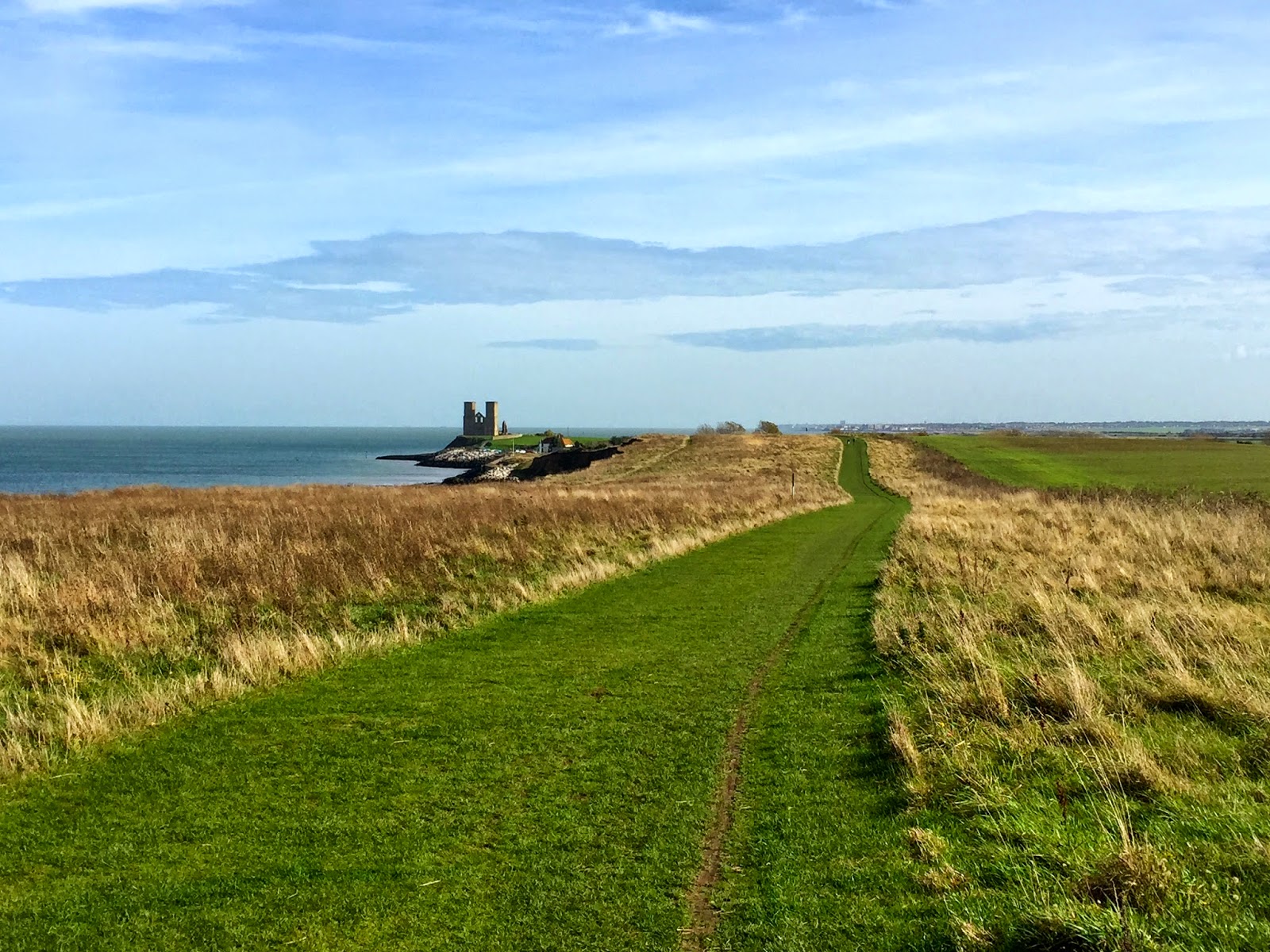 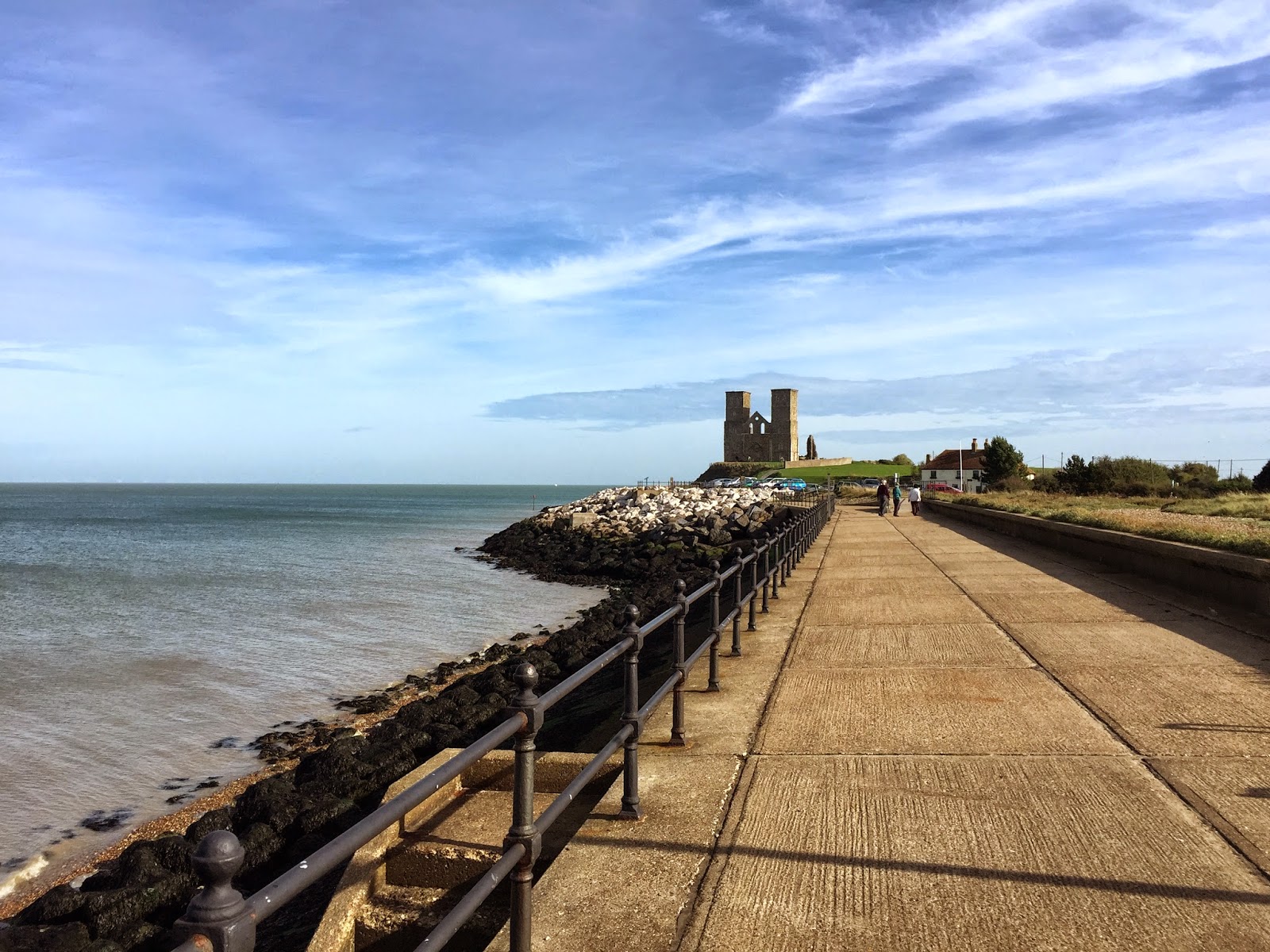 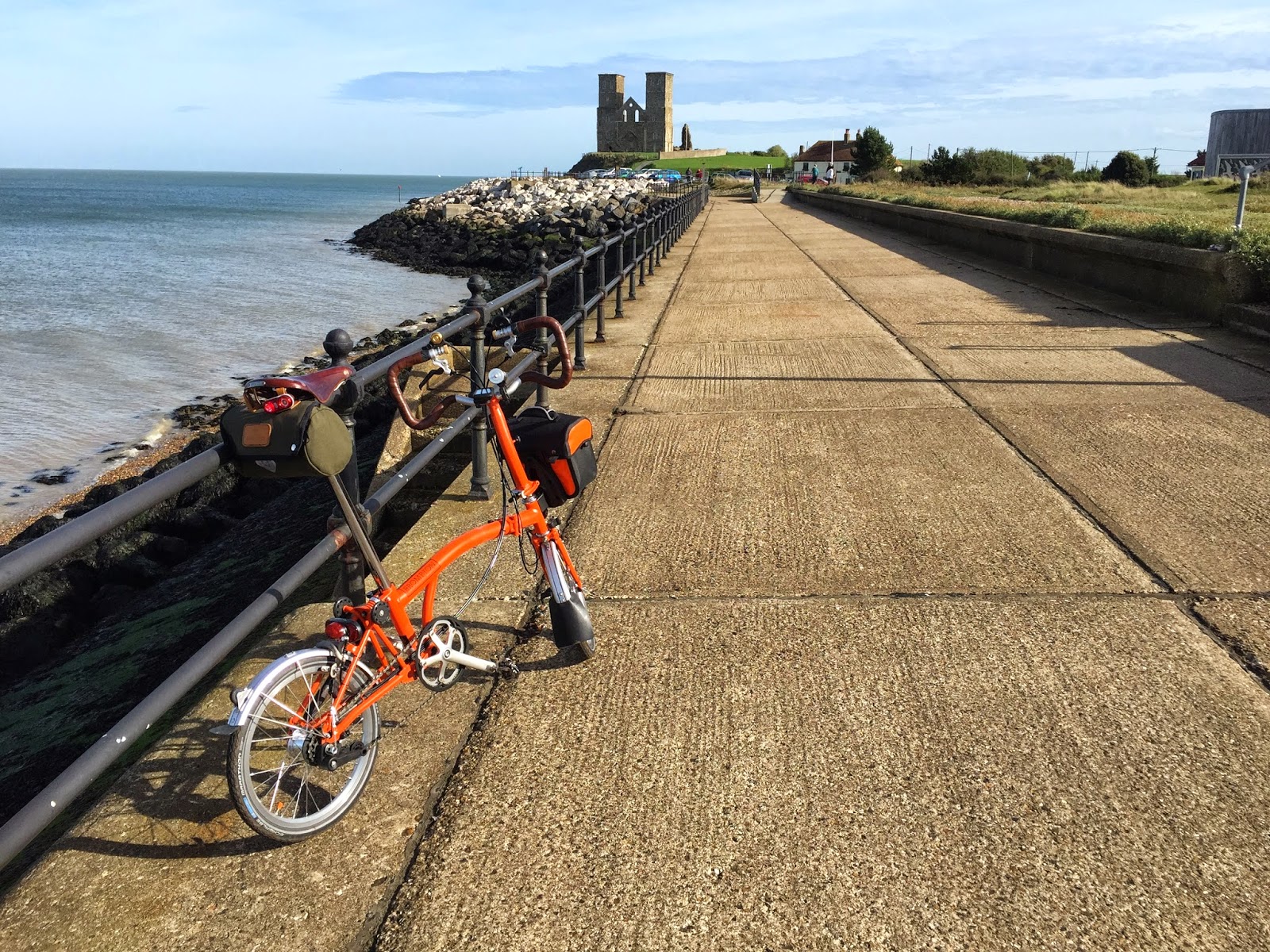 Near this site the Romans built a fort at the time of their conquest of Britain in 43 AD. After that the Saxons build a line of forts of which this site was one. Later still in the 7th Century a monetary was established, dedicated to St Mary.

Huge part of Reculver have been claimed by the sea due to coastal erosion. My O-level Geography came into play as I viewed the evidence for myself. 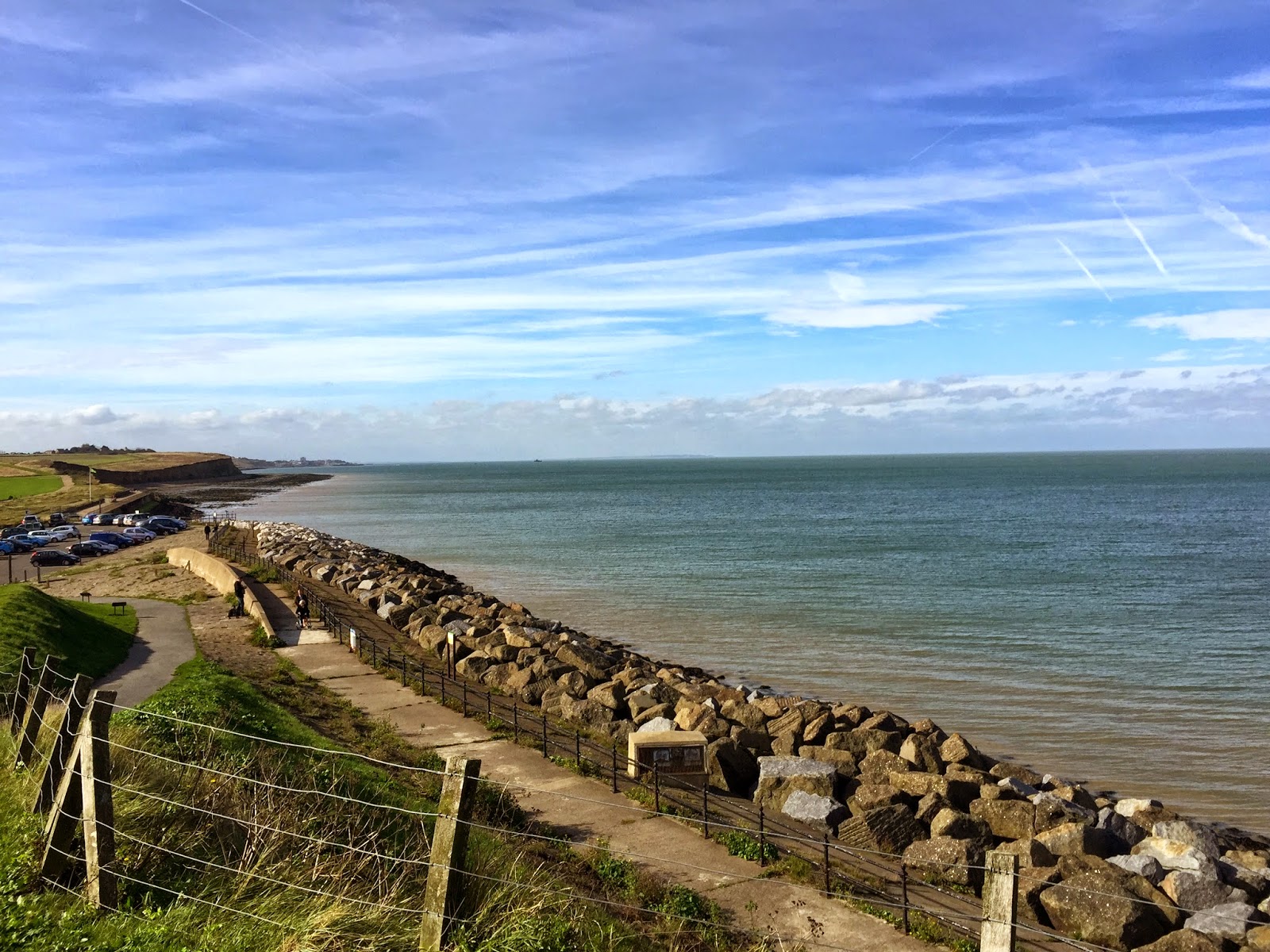 Further on in its history the twin Towers of St Mary's church had a part to play during the Second World War. Testing was carried out of Barnes Wallis's bouncing bombs as used by the RAF's 617 Squadron perhaps as the towers resembled the structure and position of the Ruhr dams. 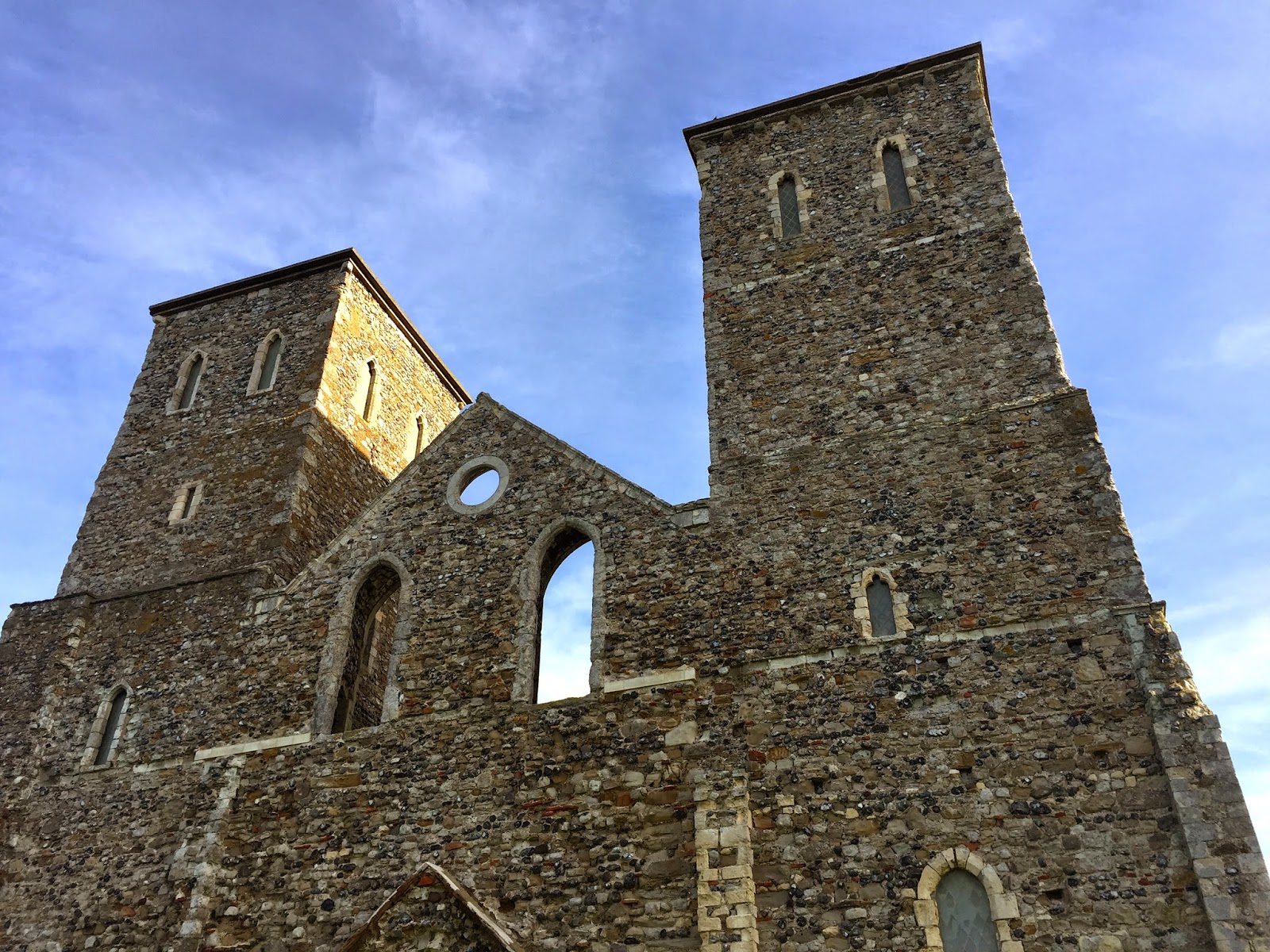 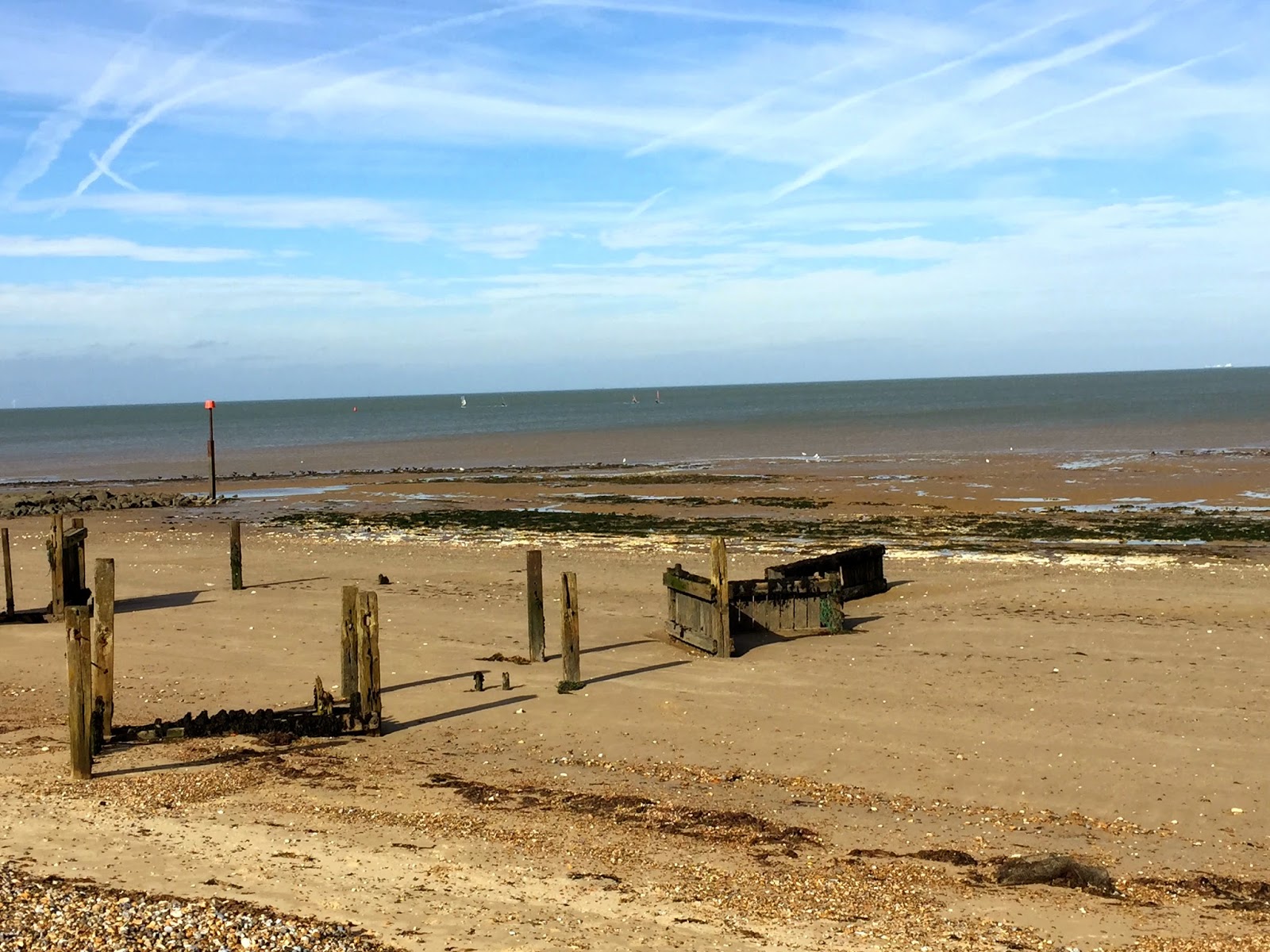 After almost 25 miles we stopped on the outskirts of Margate at a cafe commanding some rather good views. 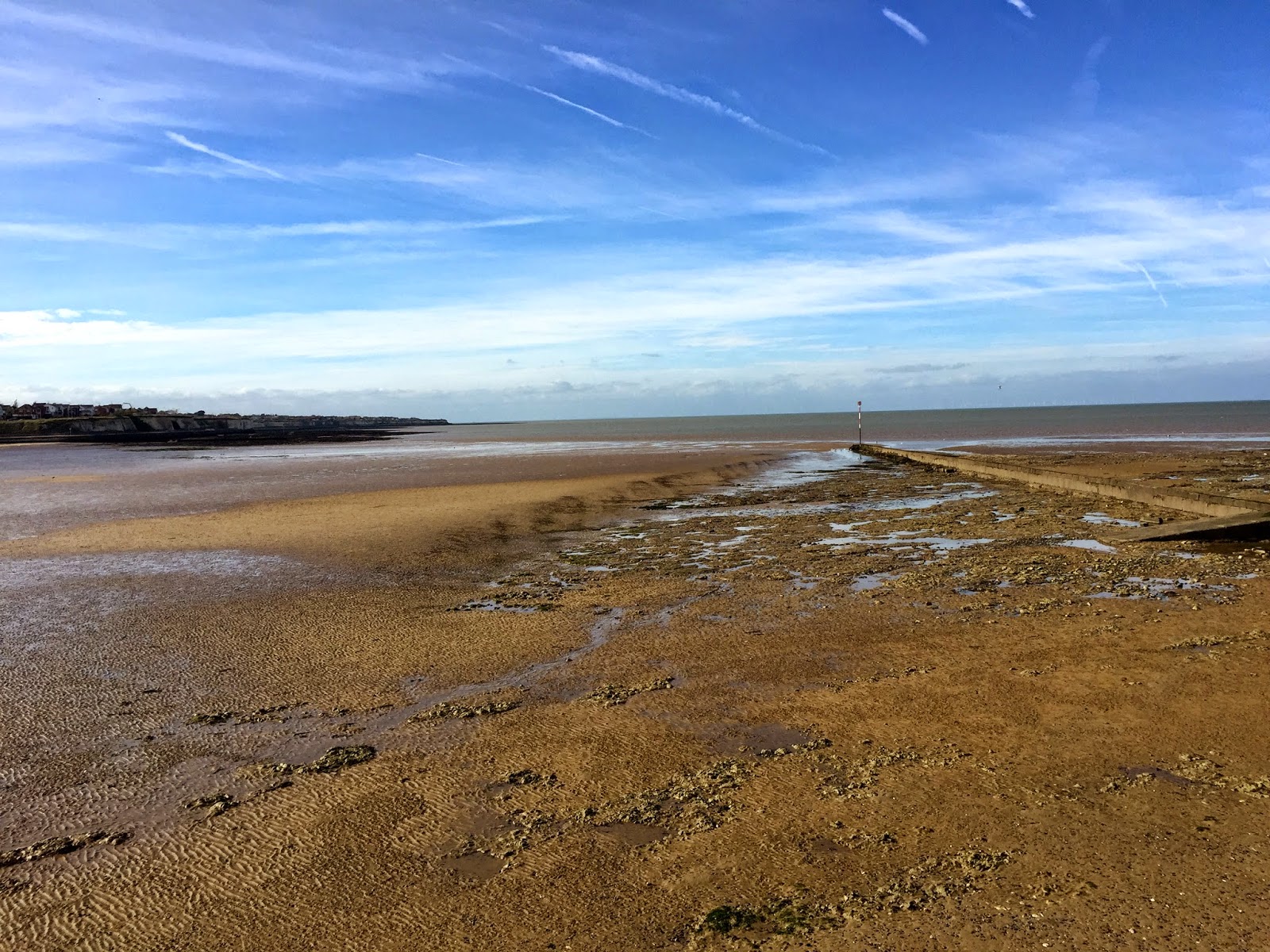 At the cafe many of us ordered various items with chips and consumed them with enthusiasm. Again it was hard to believe that it was the middle of October and the fine weather had brought out lots of locals, day tourists and those on holiday. 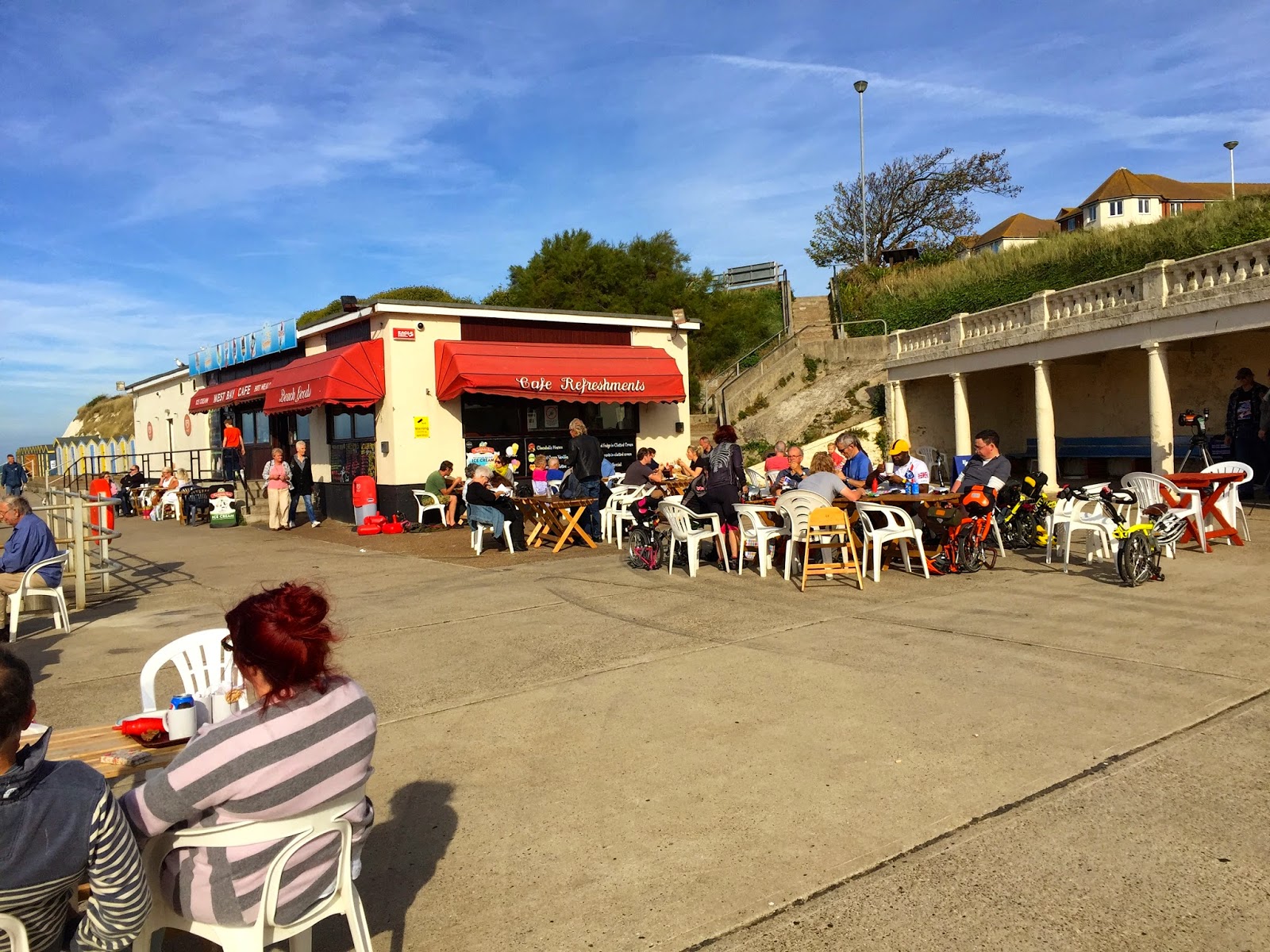 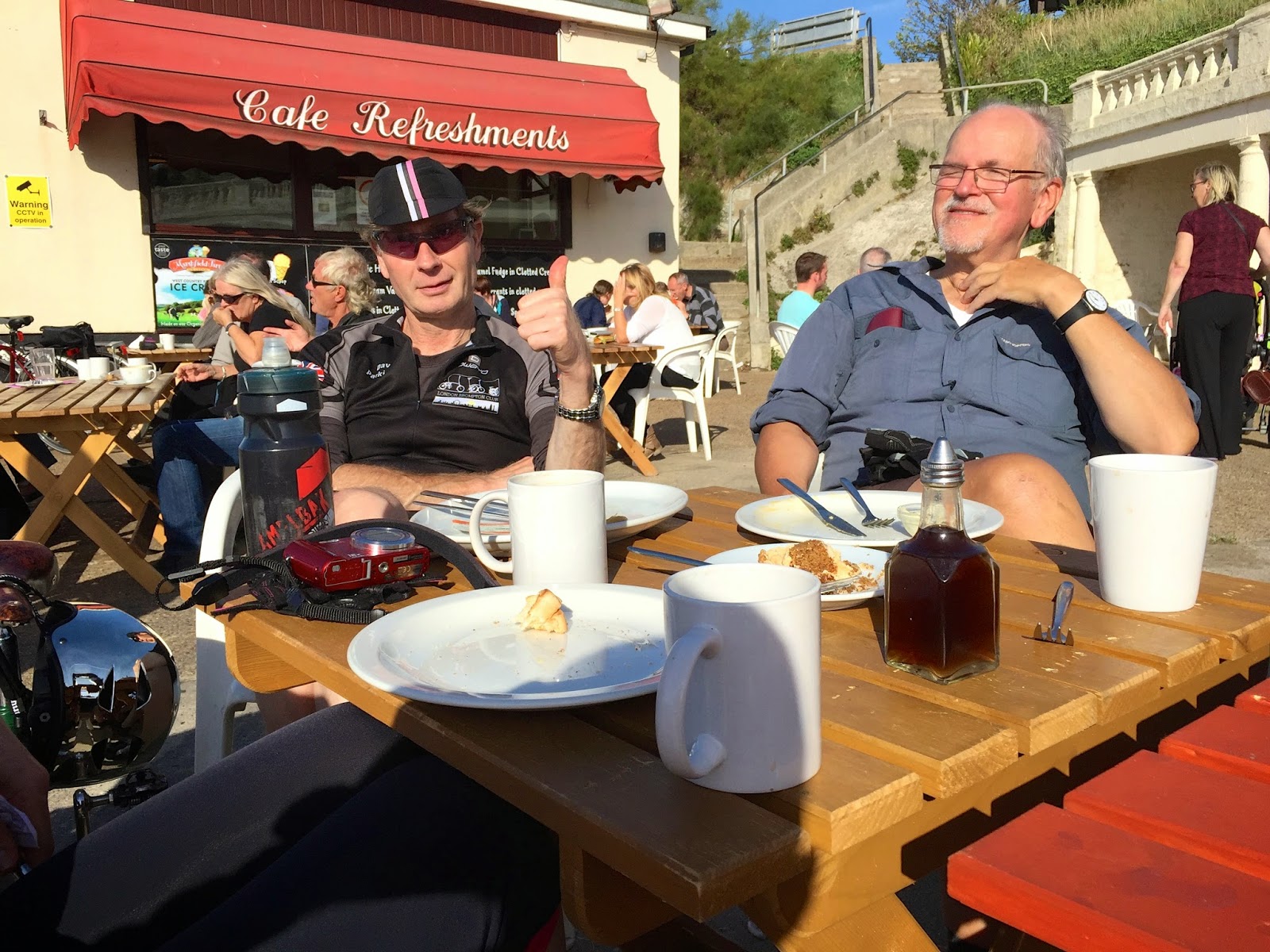 It was decided that pressing to Margate would probably take too long and we headed back the other way back to Faversham. Part of the route was on a long stretch of costal path exposed on all sides as seen in the picture below. This meant that for several miles we were battling a very strong headwind. It made the cycling difficult but for me the scenery made it all worthwhile. 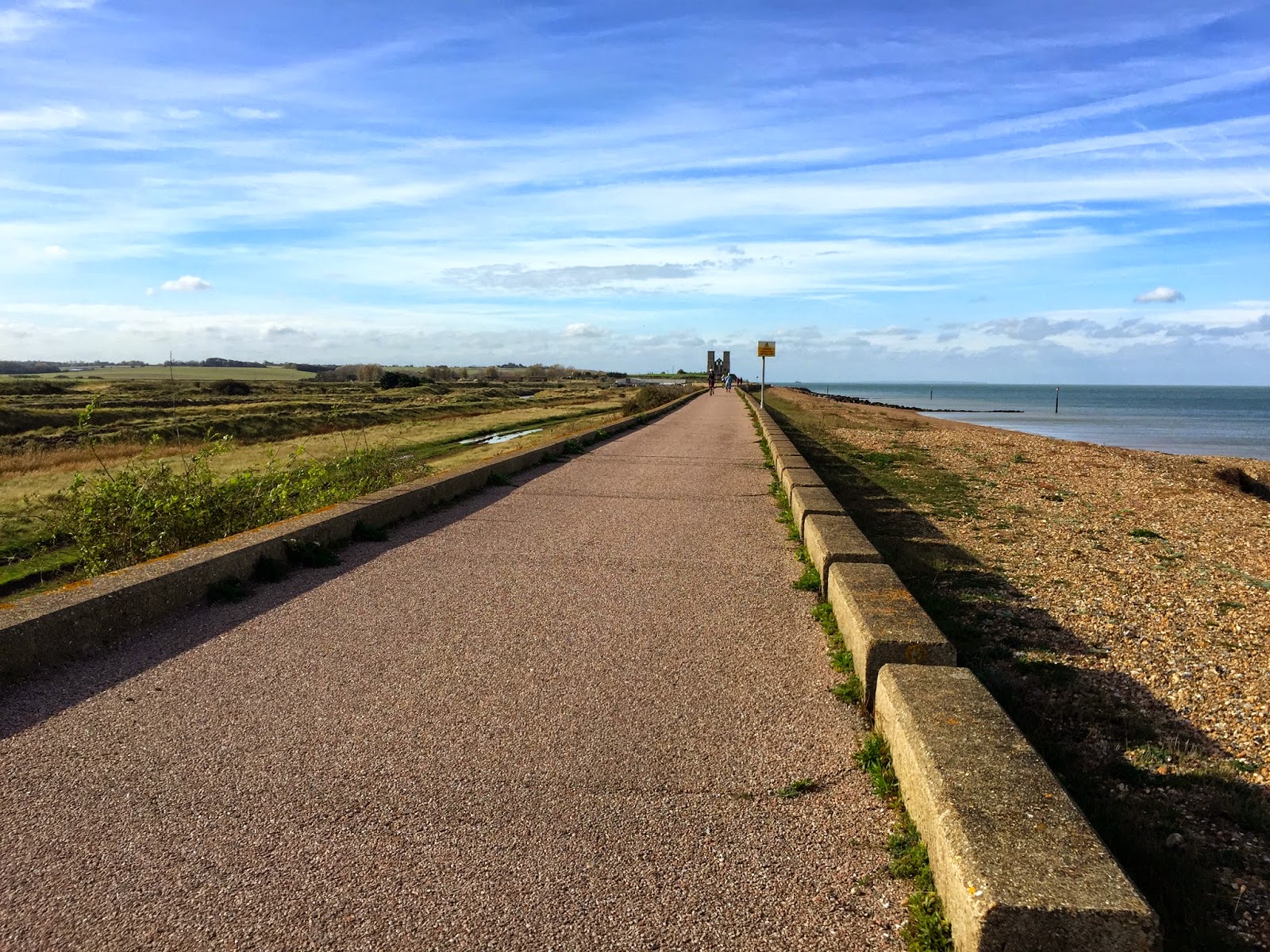 Cycling along, the bird watcher came out in me and I actually wished that I had packed an ageing pair of binoculars. The list of birds seen was impressive: 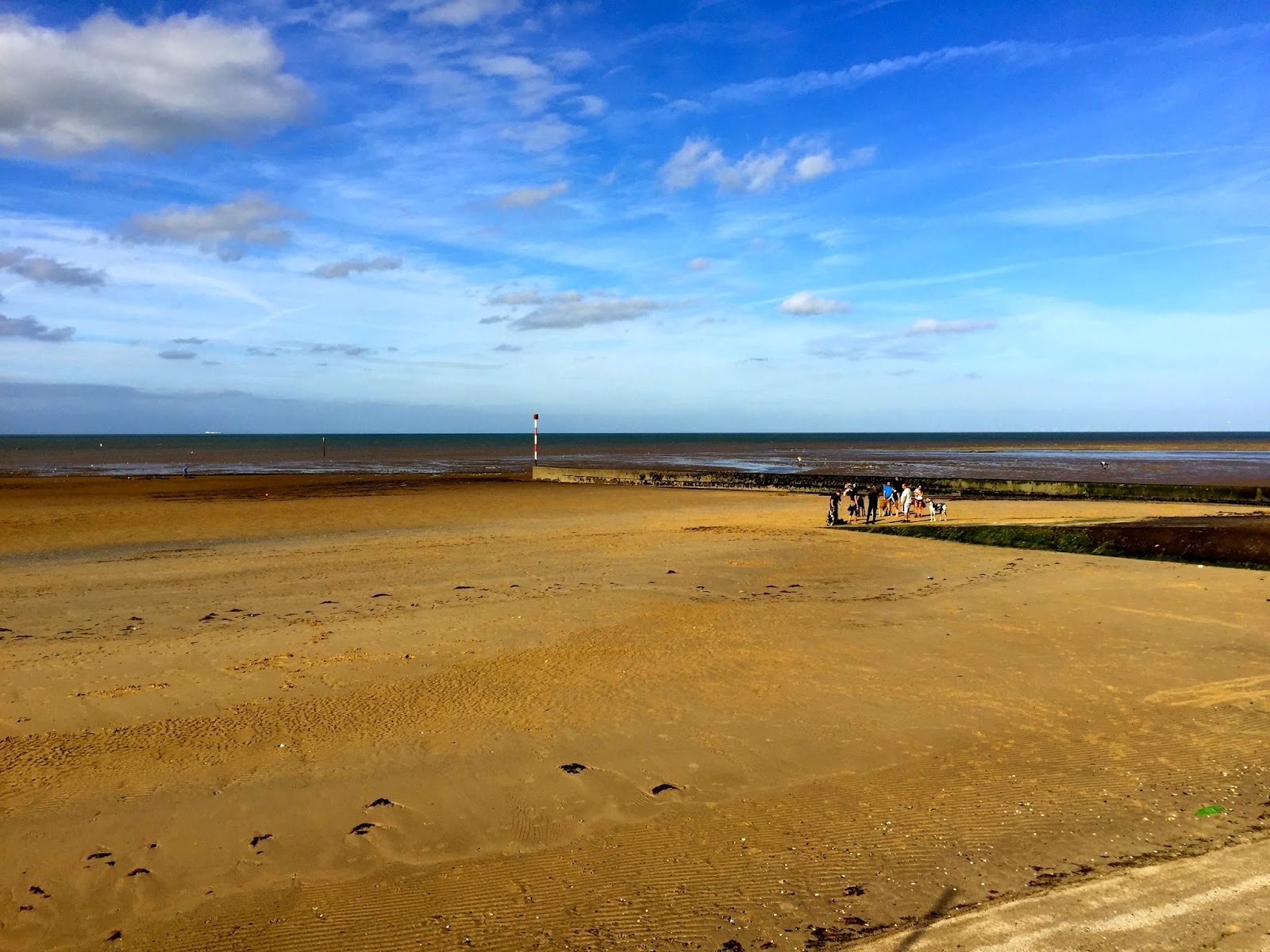 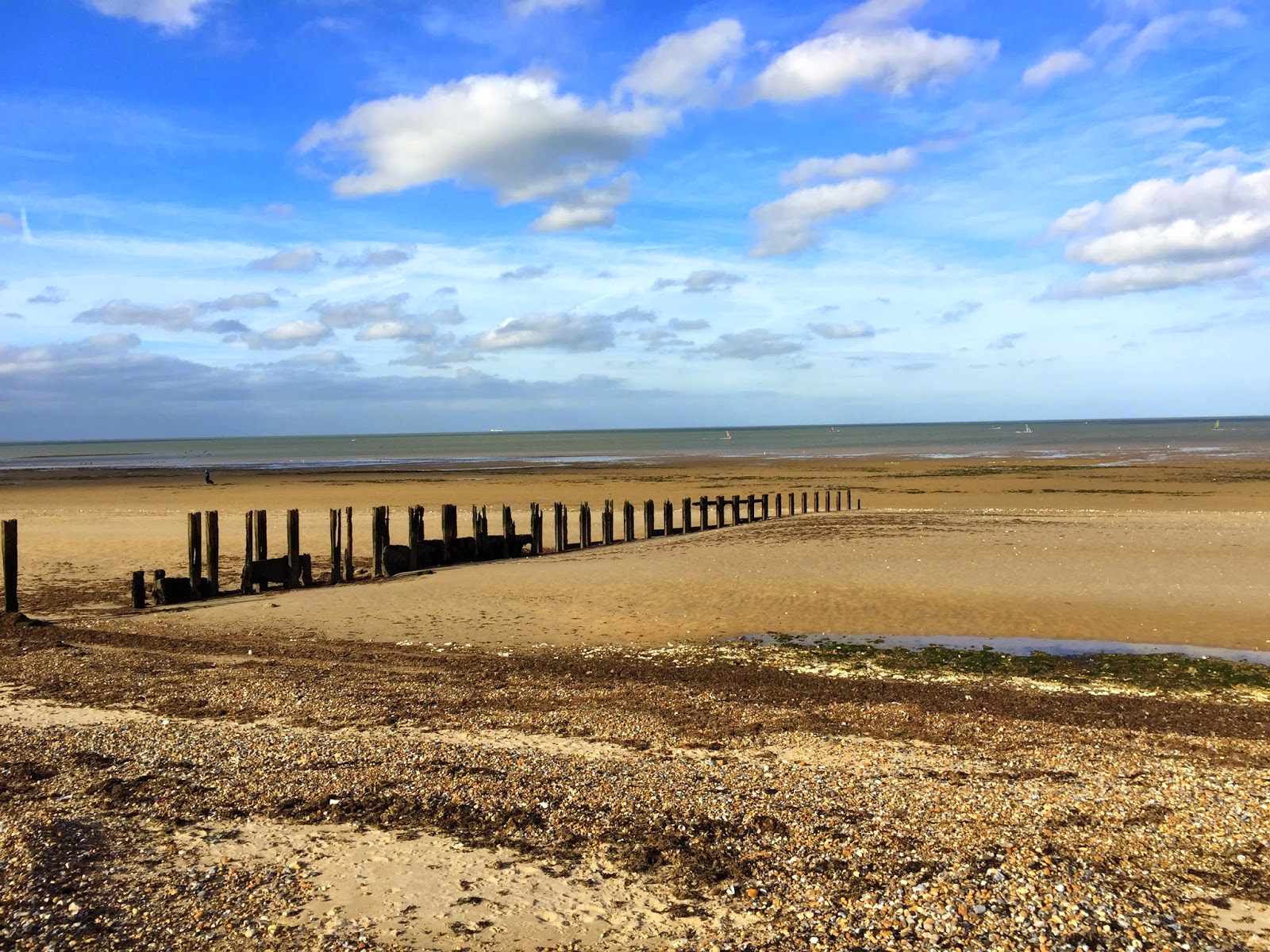 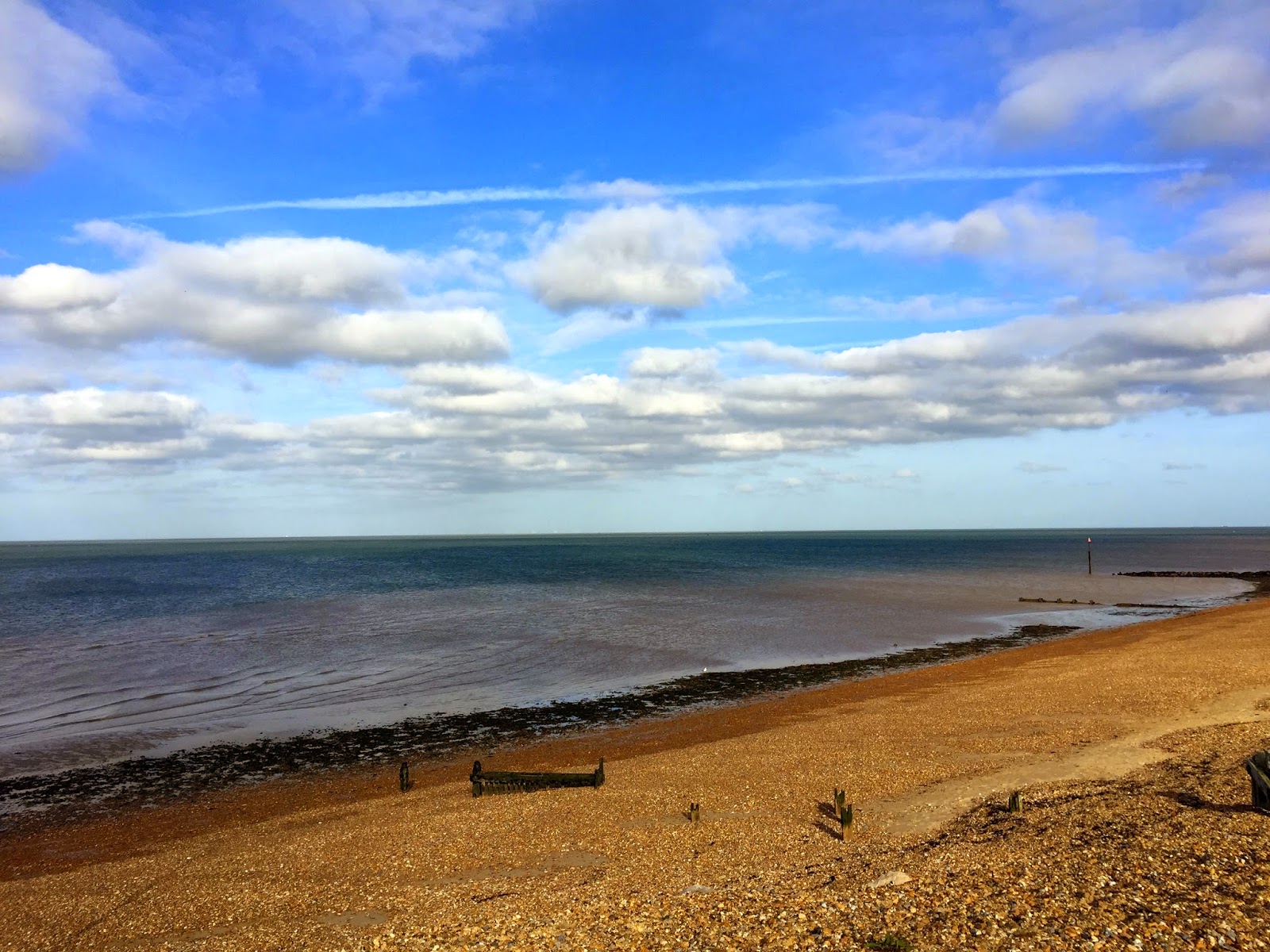 At the end of the long stretch of exposed costal path where we were all spread out we stopped and regrouped. 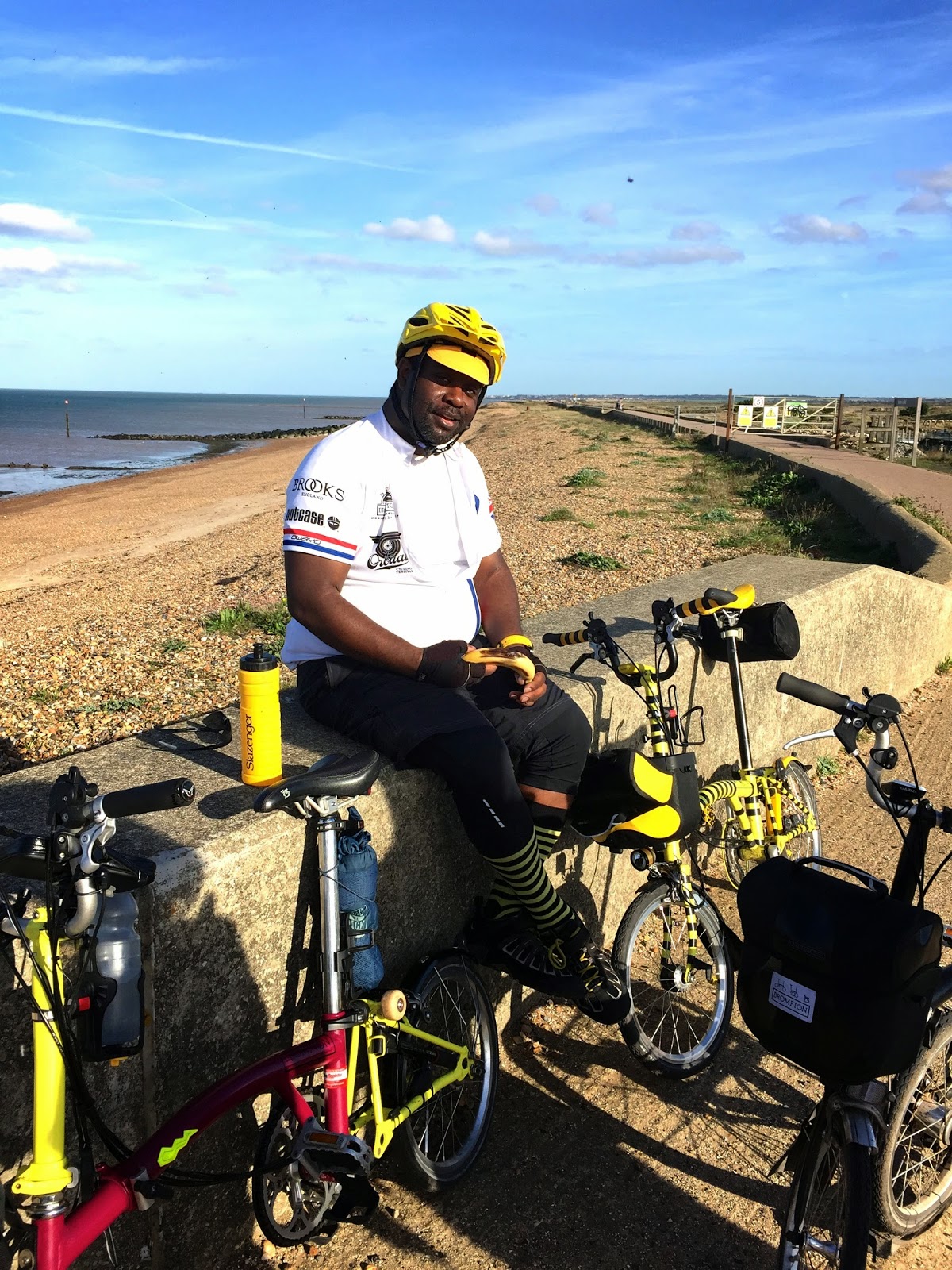 When we headed off again, the weather had turned slightly. Cloud started forming and in the distance it looked as if a storm was brewing. 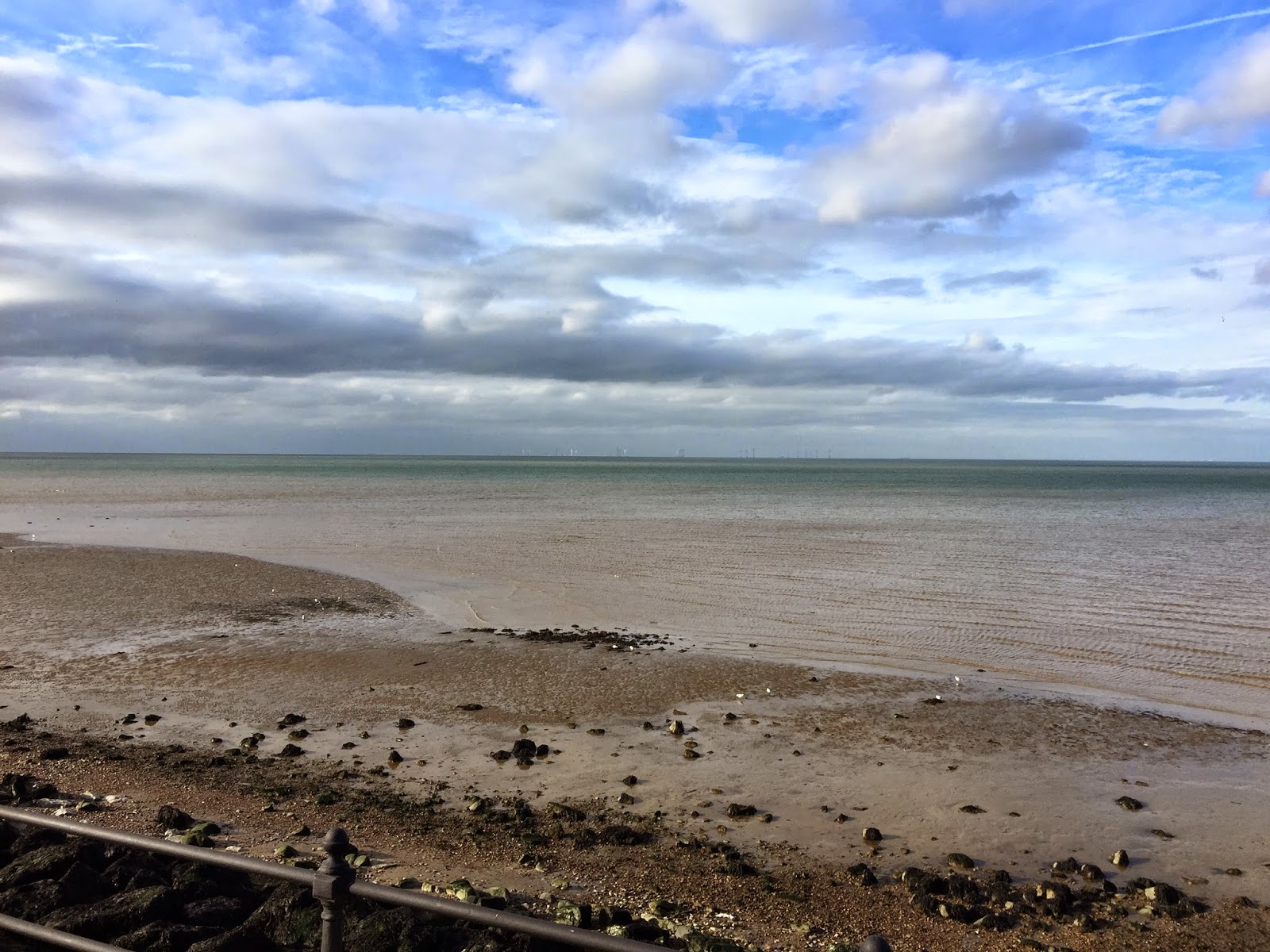 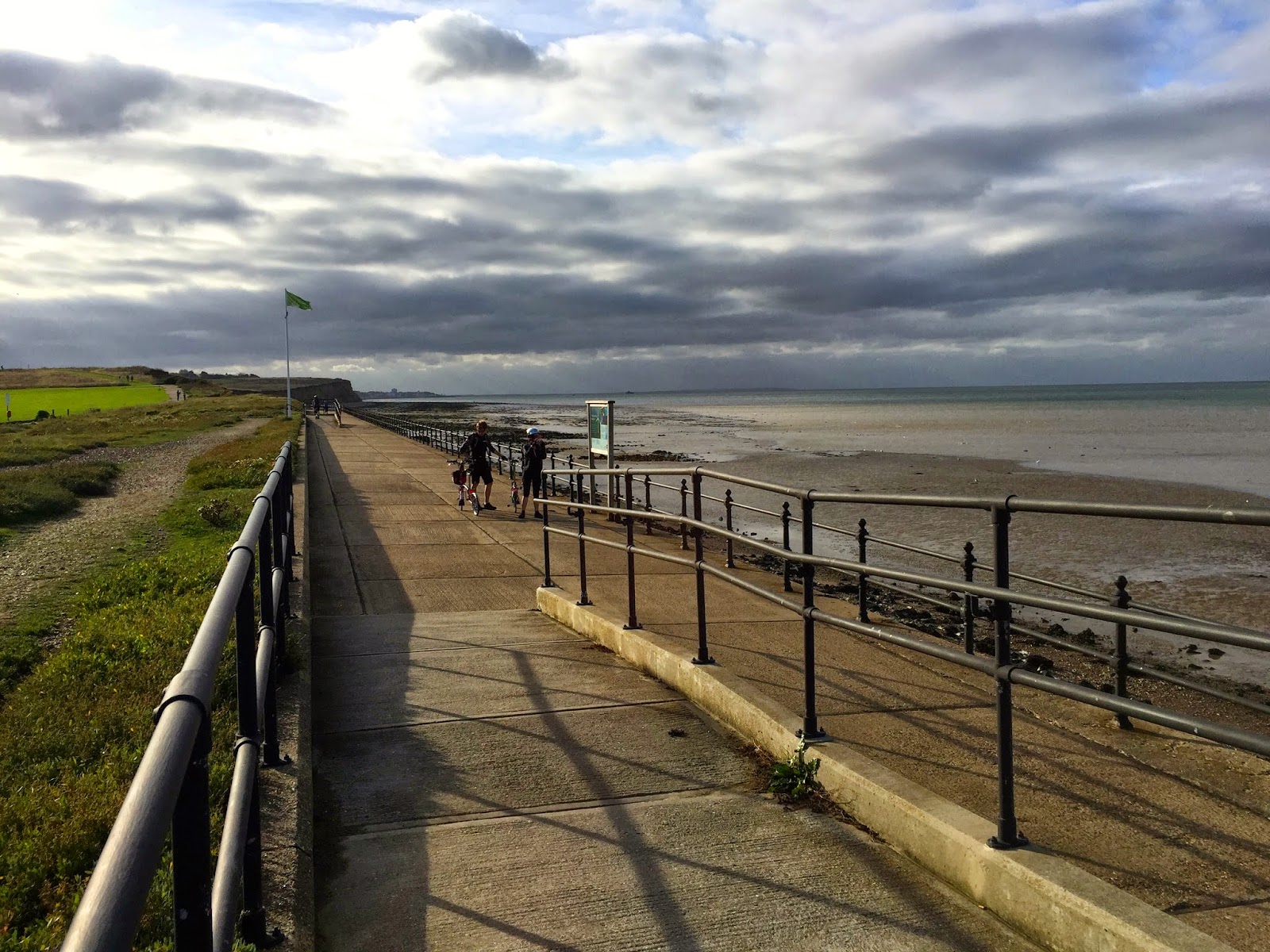 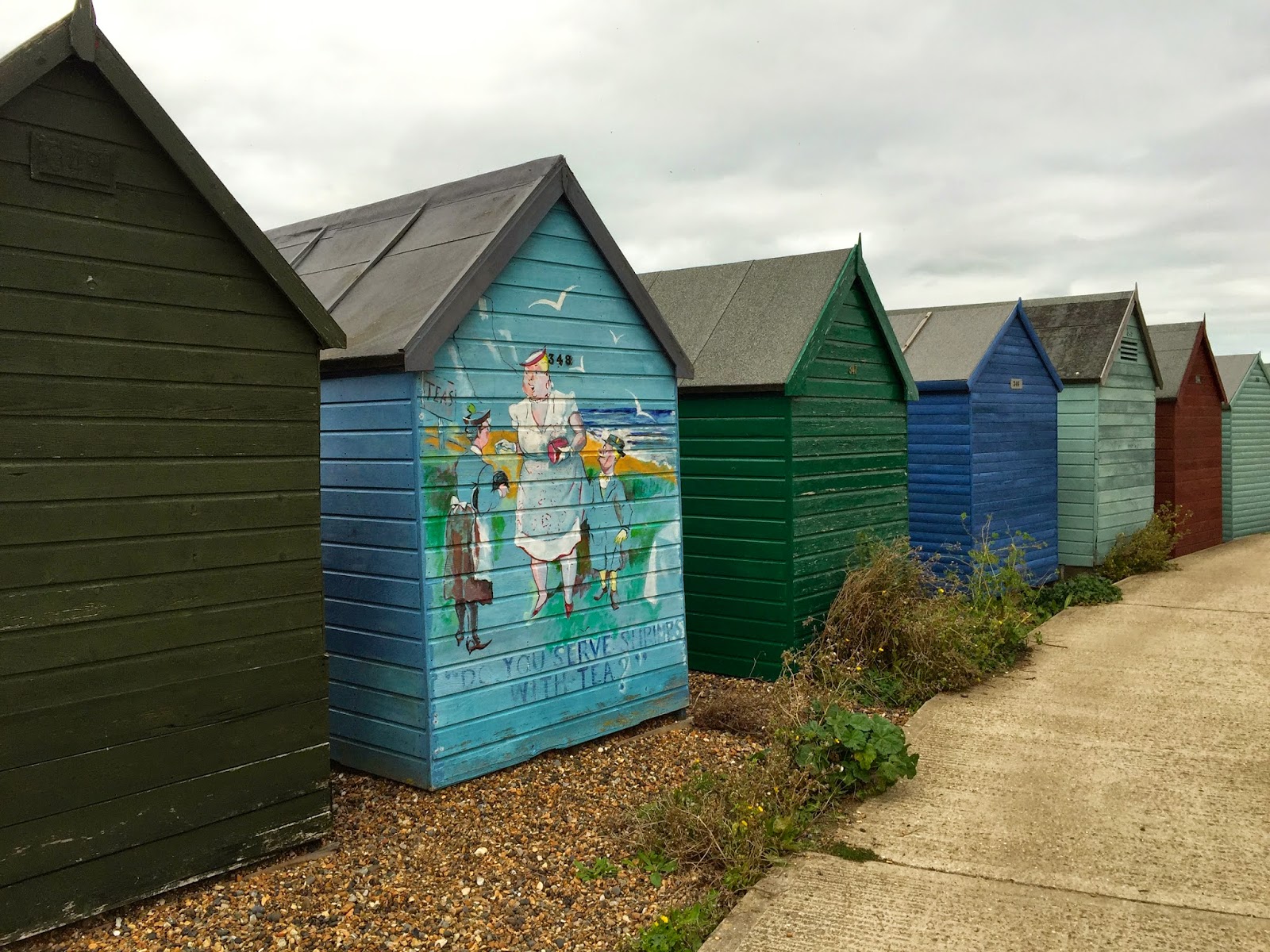 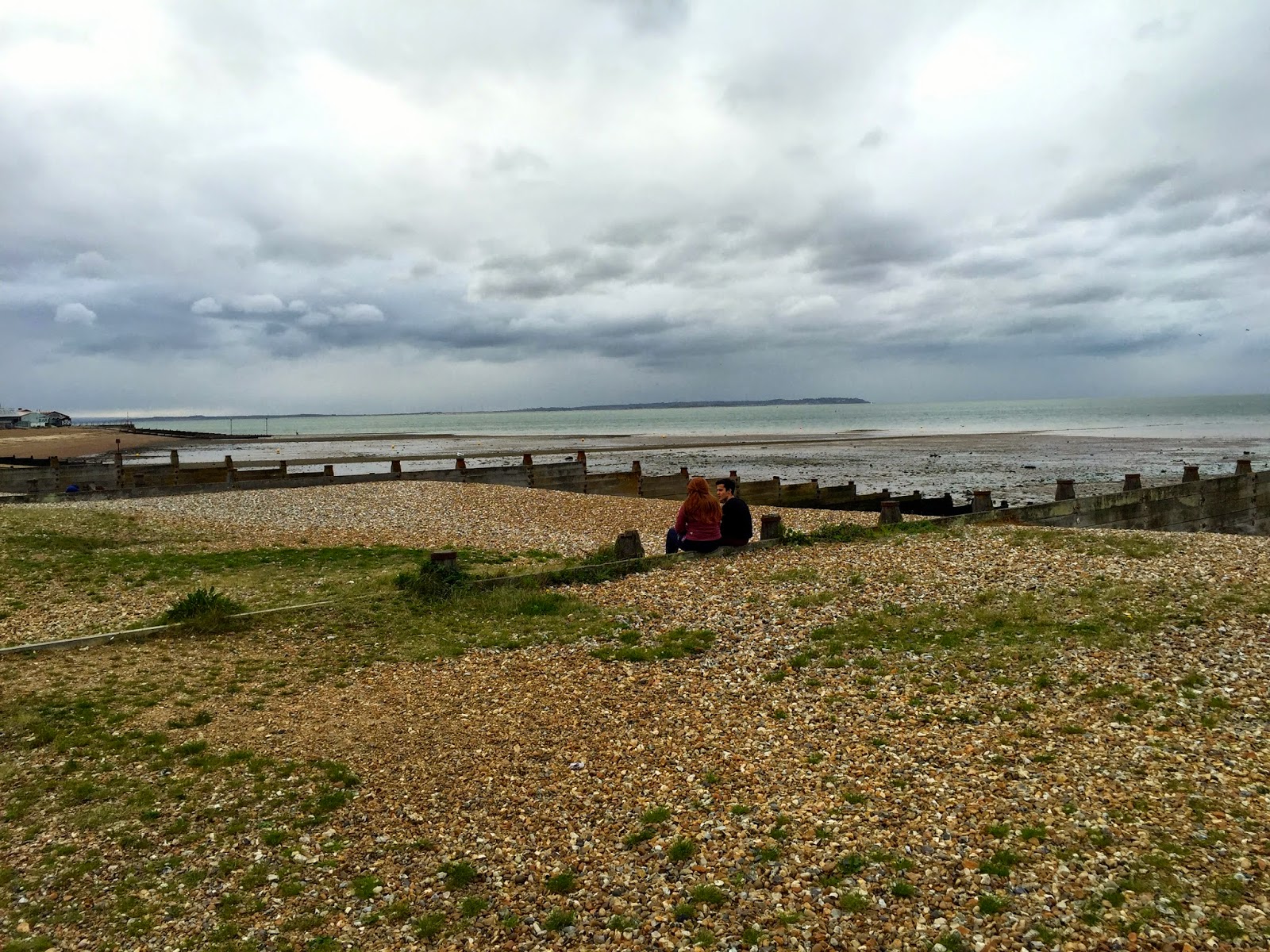 Once at Whitstable we again waited for other riders before heading off again. The number of dogs being walked and the variety of breed was amazing. 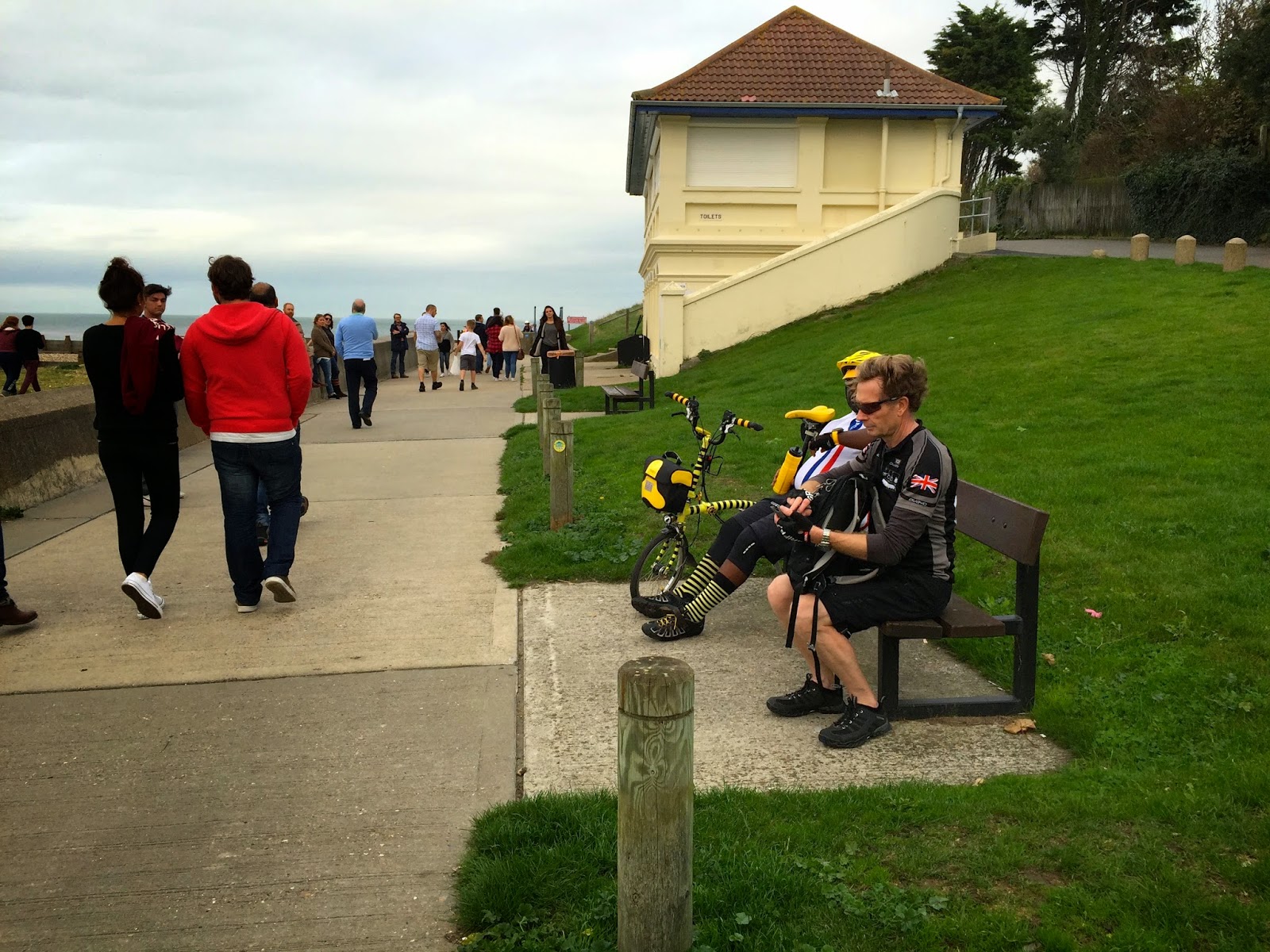 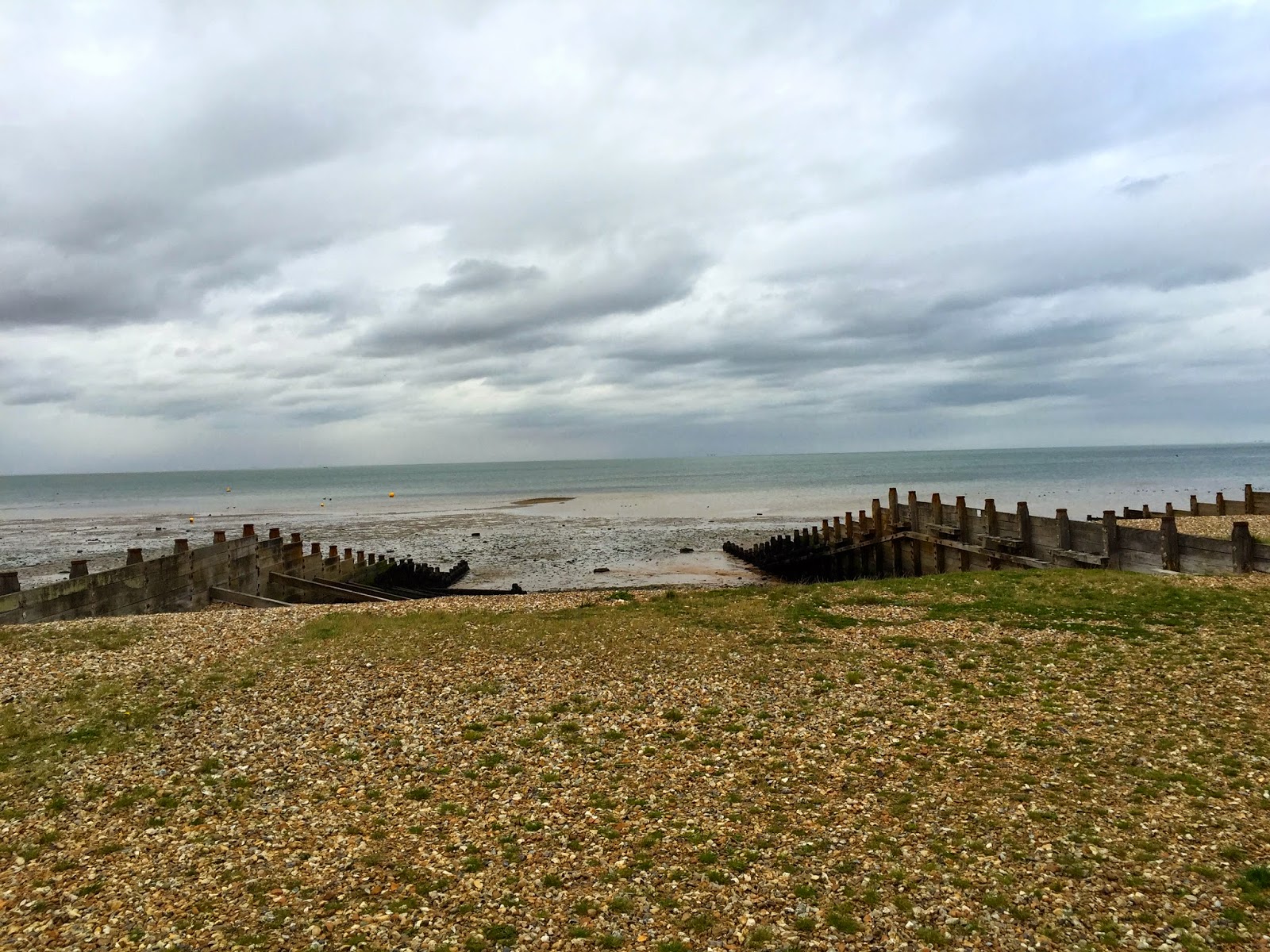 In the middle of Whitstable town centre and its narrow streets, we stopped for an ice cream at the aptly named 'Sundae Sundae.' The ice cream was lovely and I could have easily had a second. Feeling suitably refreshed we pressed on for Faversham. 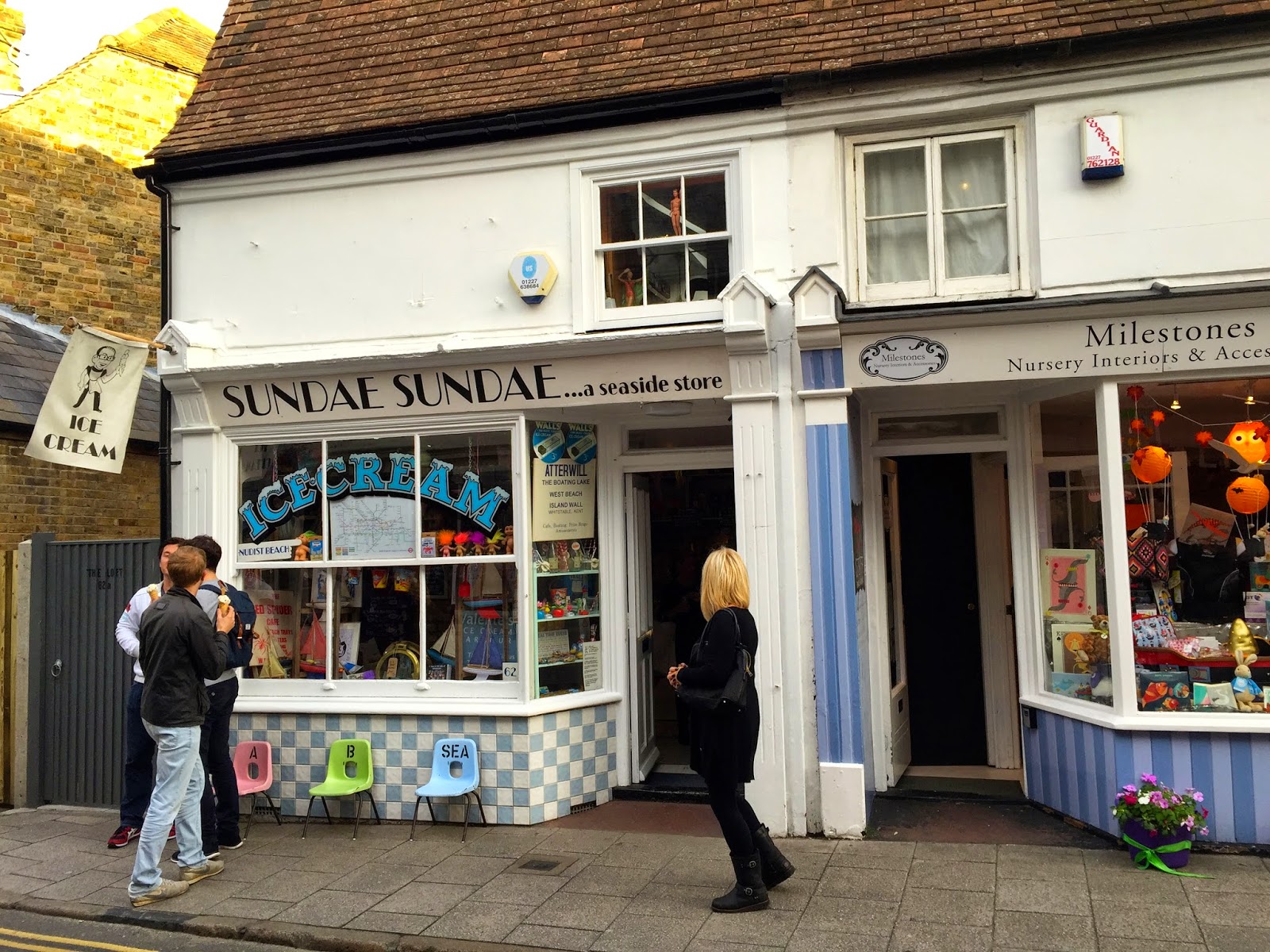 Battling strong headwinds we reached Faversham and clocked up 49 miles. We said goodbye to John and his friend and Ivo, while the rest of use boarded the train to Victoria.

Again we were fortunate to bag rather good seats but the easy flow of conversation seen on our journey to Faversham was replaced by some resting. Of course some rested more than others.

We rolled into Victoria after 19:25 said our goodbyes and went our respective ways. This was a fantastic ride and I really enjoyed it. I can imagine revisiting this ride again. As I cycled back through a pitch black Hyde Park I fancied I could still smell the sea air and the faint sound of waves lapping... A big thank you to Andy L for providing the inspiration for this ride. A bigger thank you to David for yet again for organising and guiding us expertly on this ride.

Next Saturday will see me take part in an overnight ride where I will attempt to cycled over 100 miles for the fourth time. It should be a brilliant adventure so look out for it in a future post. The map and ride data can be viewed by clicking on the link below.