London to Whitstable on my New Brompton P Type

I had been looking forward to the overnight London to Whitstable ride all week, mainly as I wanted a good run out on my new P Type Orange Brompton. With the weather looking pretty good I decided to travel as light as I dared and only took the things I thought I would need.

When I got near to Hyde park Corner I saw quite a sizeable police presence but didn't really know what it was all about. My passage towards the crossing at Hyde Park Corner was blocked so I had to make a quick detour and then carry on. As I passed I saw a 'fathers for justice' sign and the penny dropped. Someone must be on top of the elaborate entrance to Hyde Park perhaps?

I made my way to Charring Cross, where as usual I was meeting Geoff. Again I was shocked by some of the sights on offer. One particular lady, who was carrying a little weight wore the a pair of white leggings. These were almost like wearing nothing at all, as they were all but see-through. One could see that she was wearing a thong, I believe they are called. For some reason this made me think of the Meridian Line - the line that all good geography students will recall which separates the Western and Eastern Hemisphere!

Thankfully Geoff arrived soon after and we made our way to Hyde Park Corner. When we arrived there were already a good few riders assembling and Simon the ride leader was welcoming participants.


There were only a few Bromptonians going on this ride. As well as Geoff, Anne, Charlie and Bob.  Sadly, Bob was on Tail End Charlie duties so we didn't get the chance to chew the fat. David and Mark were sadly unable to attend. Charged by David to look after Anne I attempted to ride with her for most of the night. Anne didn't need looking after and I had a hard job keeping up with her!


A few youths on bicycles were doing wheelies under the arch but suggestion was made that they might be up to no good. With this my eyes did not stray too far from my new prize!


The ride was going to be 67 miles and I had already done 6 miles to get to Charring Cross. It was probably ill advised to go on such a long ride with a brand new Brooks B17 Special saddle but in for a penny...

At the stroke of midnight we were off. That wondrous sound of cleats clicking into pedals cancelled out the sounds of traffic and truly confirmed that we were indeed off! 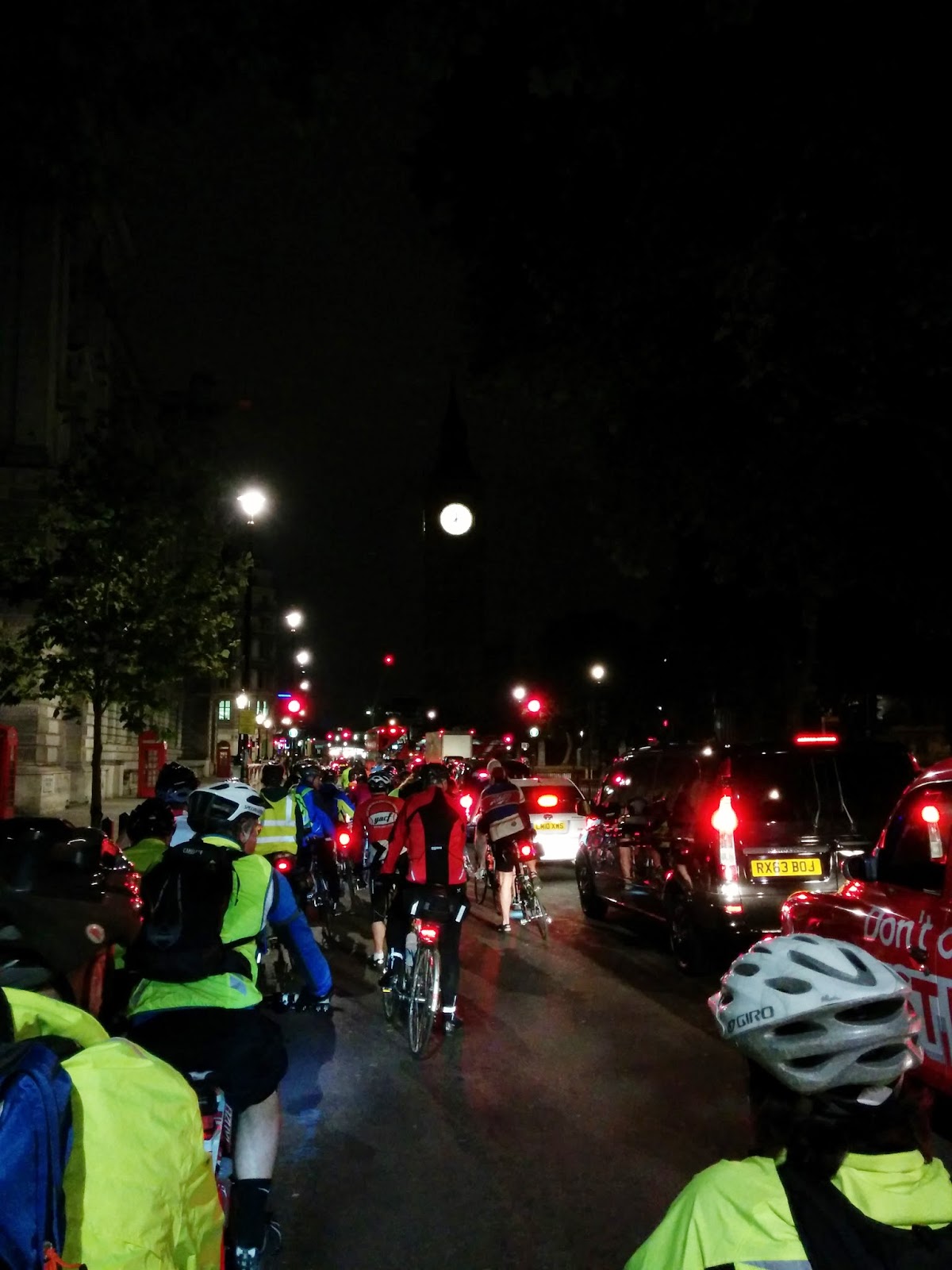 For this ride I was keen to test out the SON dynamo lighting system that I had chosen to be fitted to my new P Type. In addition I took my Hope battery light and while we were still in the urban environment kept it on the flashing mode pointing ahead.  When we eventually got past the urban sprawl I could really see what the dynamo lighting was like. Was it any good? Yes. Even on dark unlit country lanes, during those times on the ride when I was on my own as the riders had spread out, on the whole I didn't feel I needed additional lights. It produced a bright, white beam that illuminated the road ahead pretty well. I did think that it might need slight adjustment to get the angle of illumination to my taste but I was impressed.

The rear powered light was also bright and I didn't have to worry about it. Great really and I am glad I opted for it. The dynamo light isn't one that will light up tens of metres ahead.  It is more to shine a beam in front, pointing at the road so you can see what is coming up. As I indicate a flashing commuter light would be a good addition.

We reached the familiar sight of The Monument and after regrouping set off again. Passing all the London landmarks made me think of some of the great night rides we have had over the years. I am sure that in the coming months we will have our Monopoly Board Ride and perhaps the King of London night rides, the Christmas Lights Night Ride. 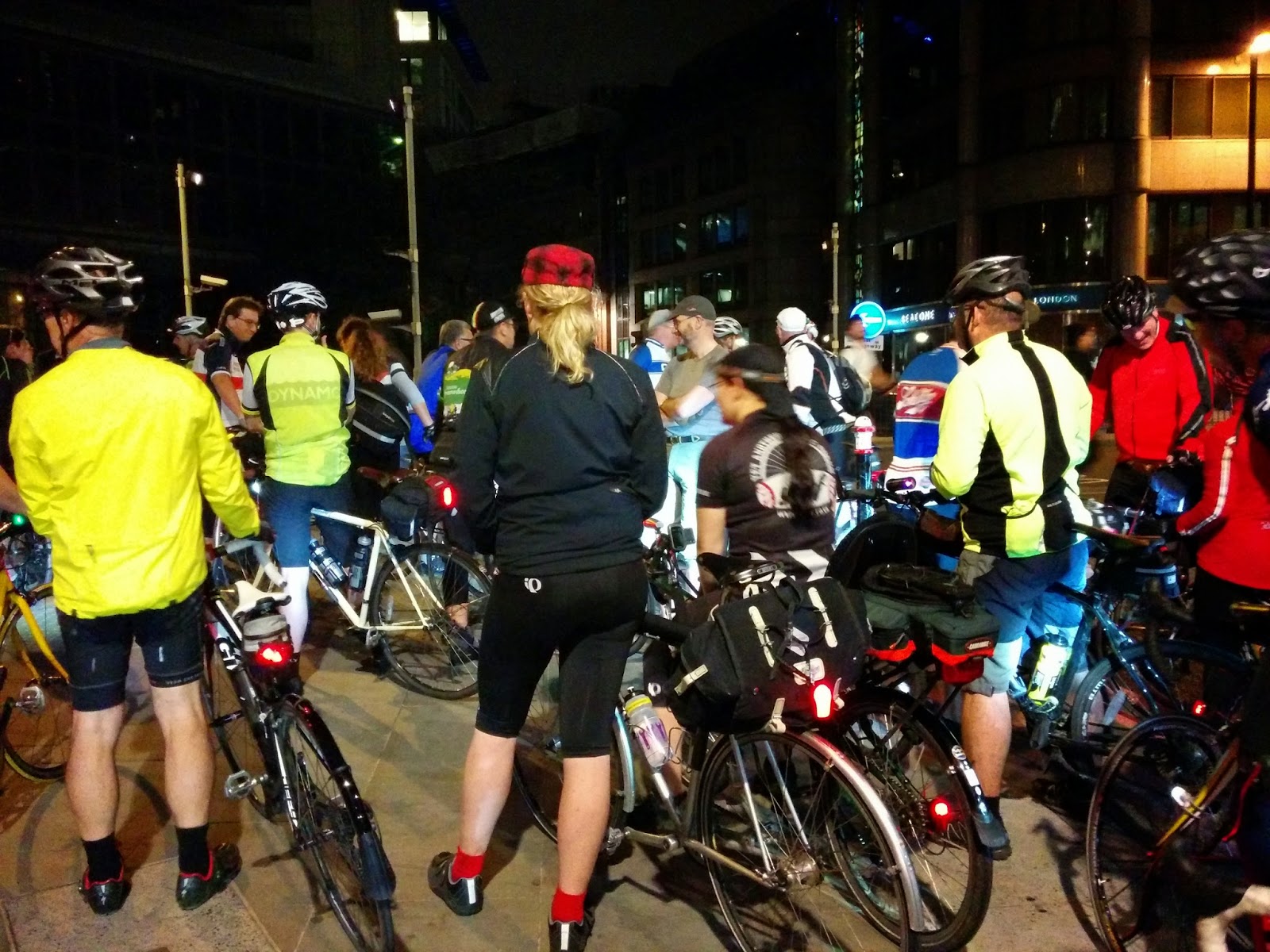 The group was making excellent pace and before long we had reached Greenwich. Thankfully there didn't seem to be too many if any mechanical problems or punctures. This helped with the brisk progress. 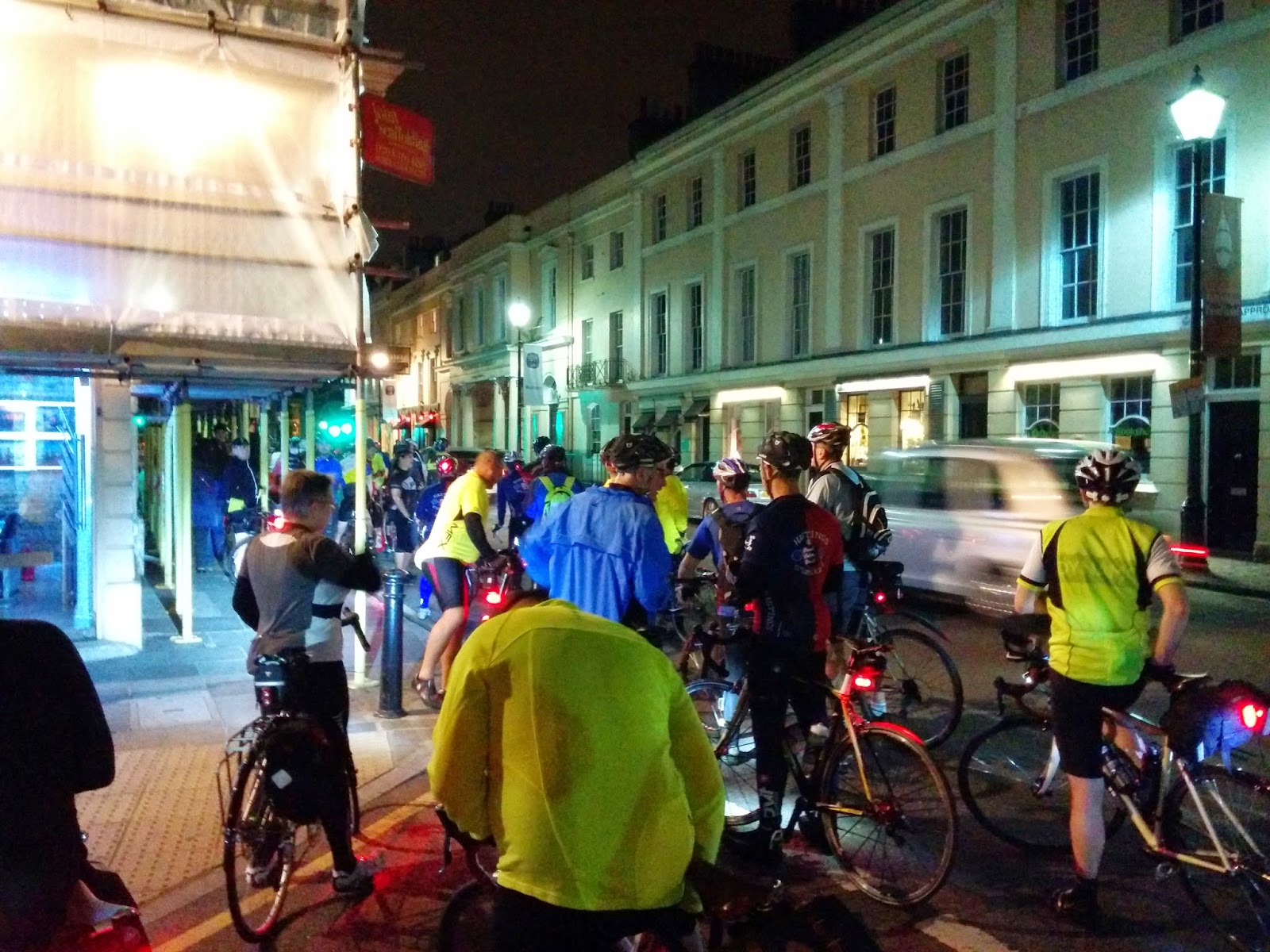 Every so often we would stop and wait for the tail to catch up. The Tail End Charlies / Wayfinders  as always did an excellent job at letting us know when there was a turning and ensuring all were safe. Having not been on a night ride to the coast for some time, it took a while to get used to letting those behind me know that there was a hole, or that I was slowing down or stopping. Again, when I said, hole, bump, stopping etc.., in my mind I sounded like the late Sir Norman Wisdom which very occasionally induced a giggle. 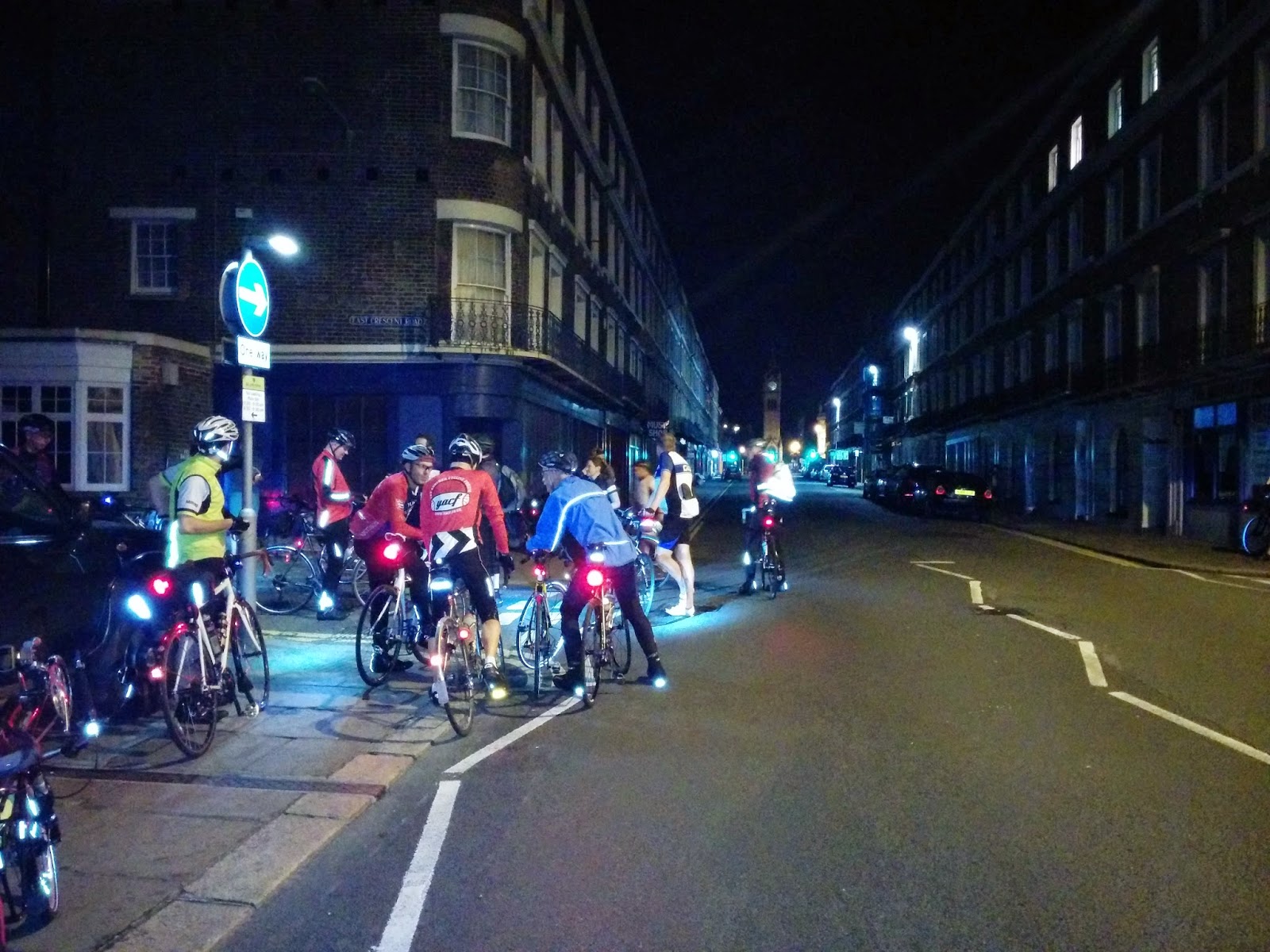 At about 35 miles we reached the halfway point and the sanctuary of a Church Hall in Strood. Much ham rolls, cake and liquid refreshments were consumed with enthusiasm! Saying our thanks we headed off again for the second half of the ride. 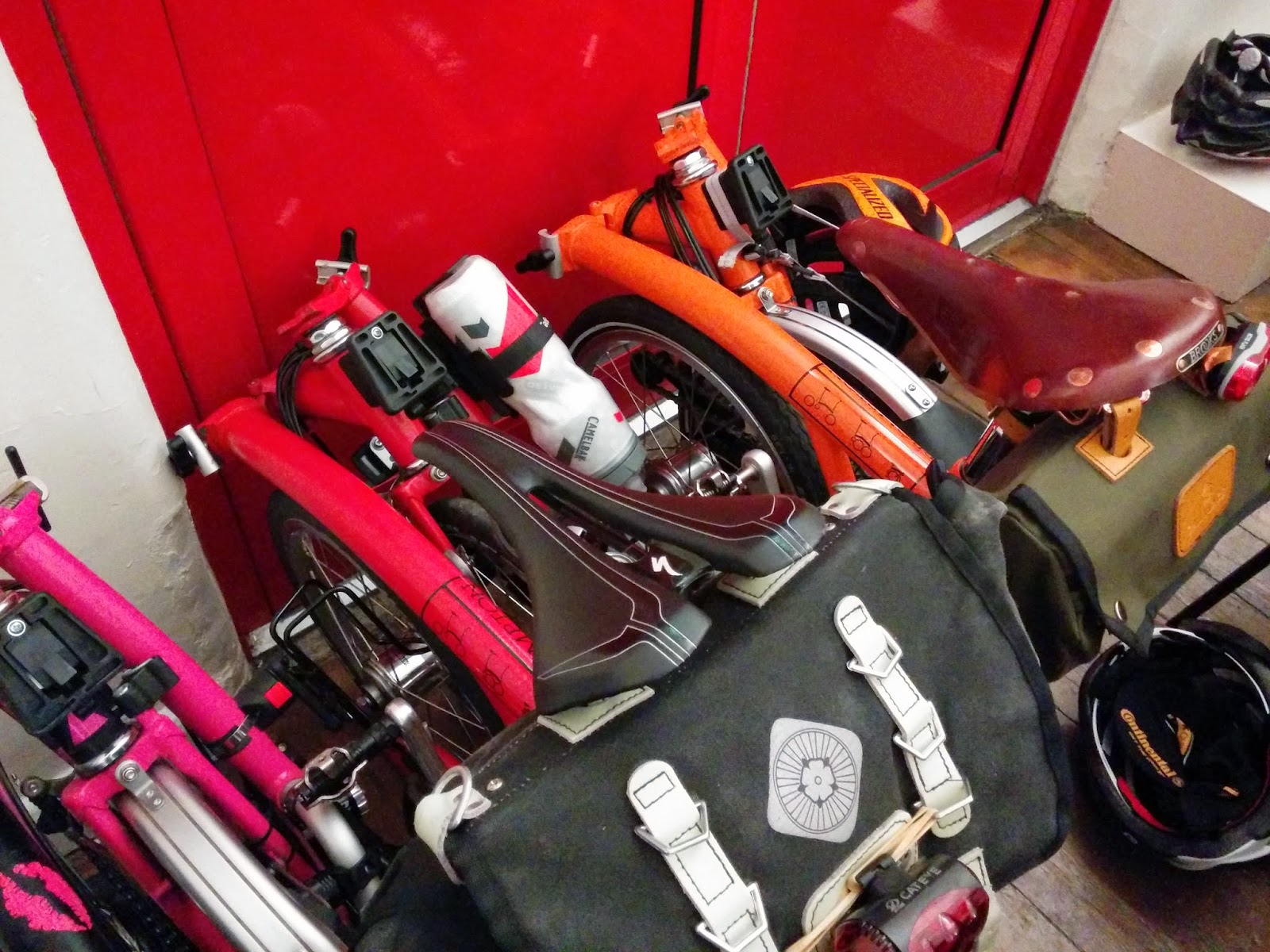 Normally, when I set off after the halfway point I feel extremely cold. It was a mild night and there was a little nip in the air but for the first time I actually felt fine.

Before long dawn was approaching. Birds began the dawn chorus and scenery which was cloaked in the mystery of darkness, started to reveal itself. The scenery was gorgeous and picturesque views competed with each other. 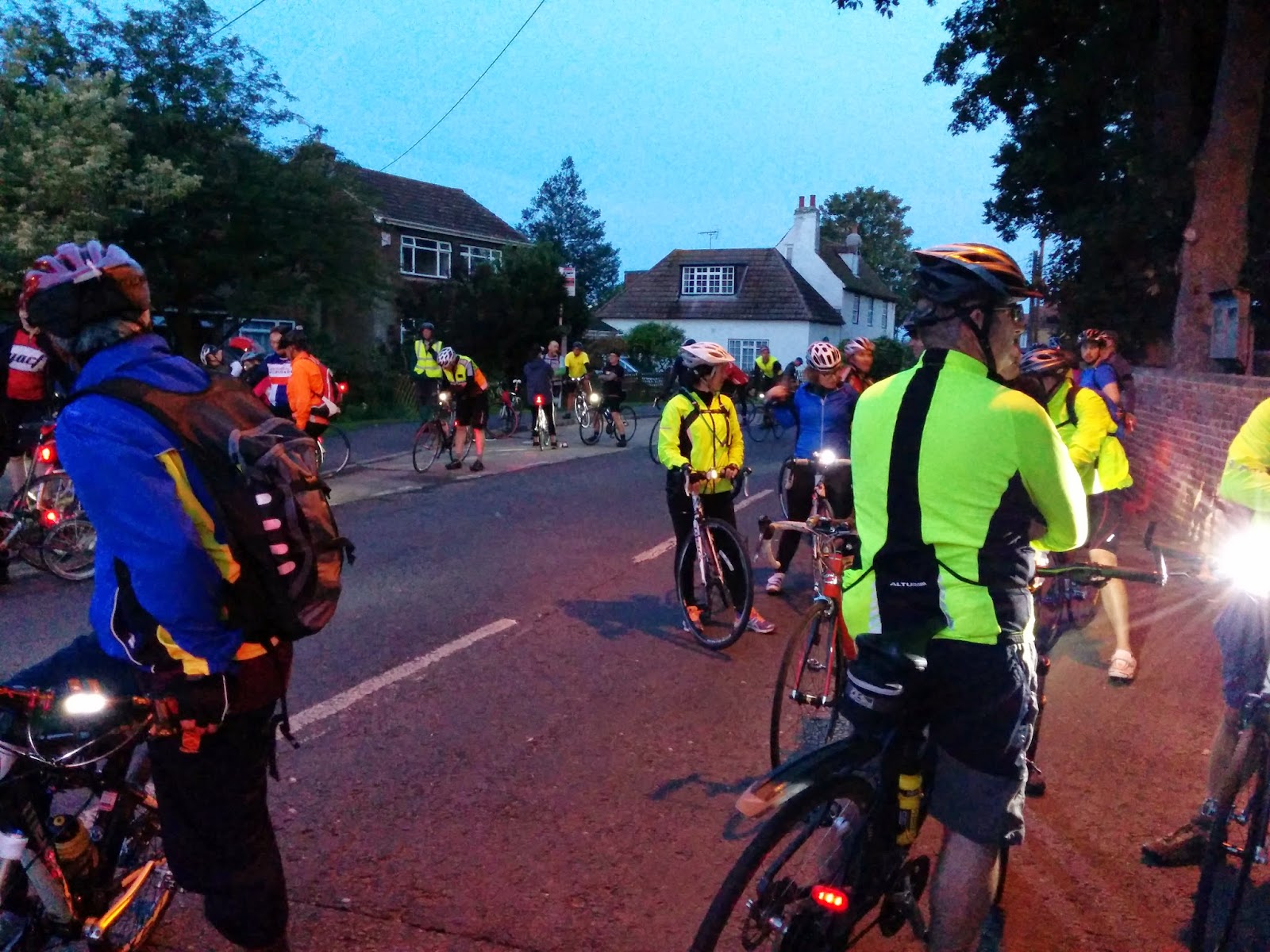 With the light being pretty good I noticed that my front dynamo powered light had turned itself off. Momentary panic ensued until I realised that I had it on the rather clever setting where it comes on / turns off when dark enough / light enough. 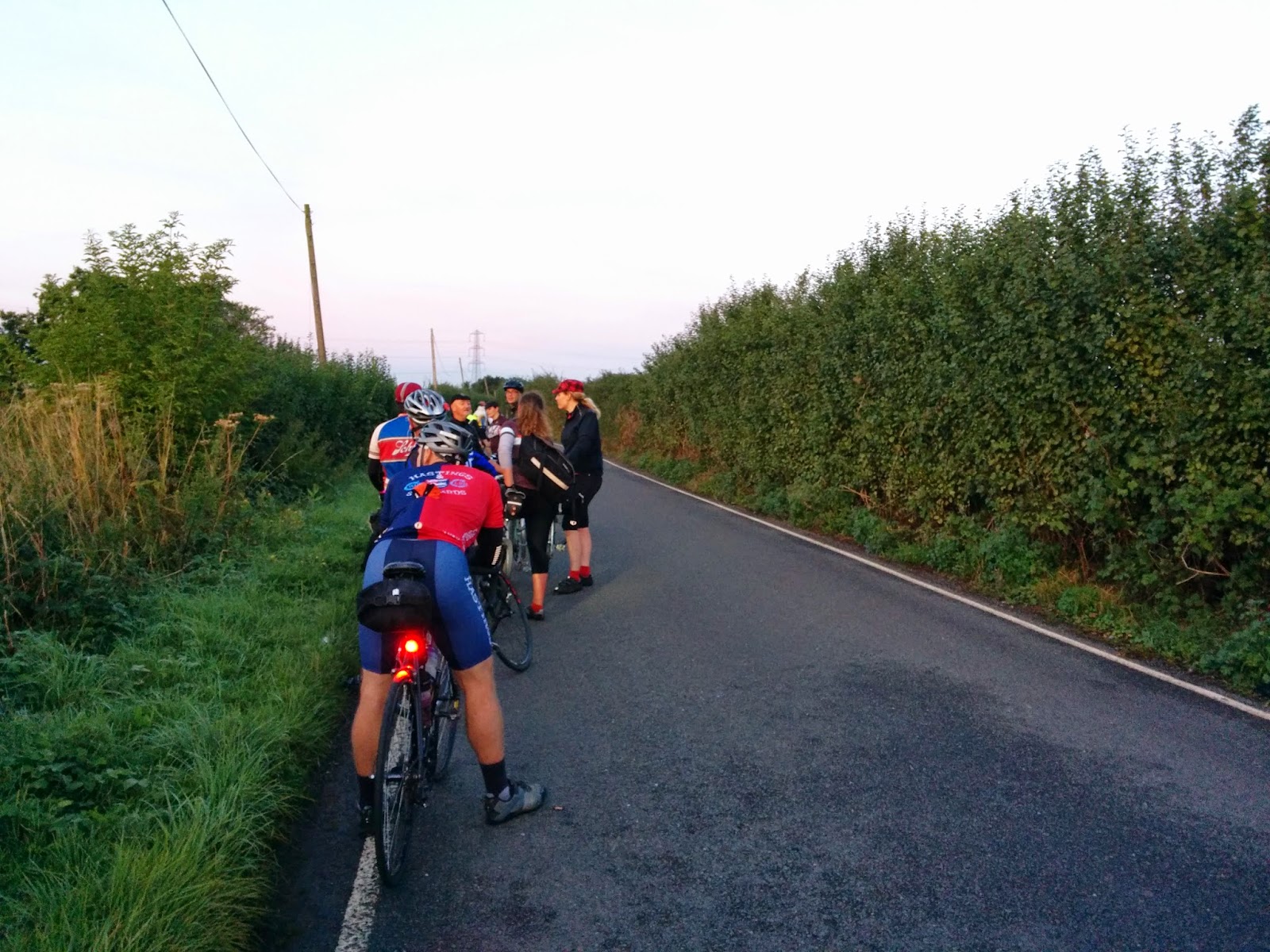 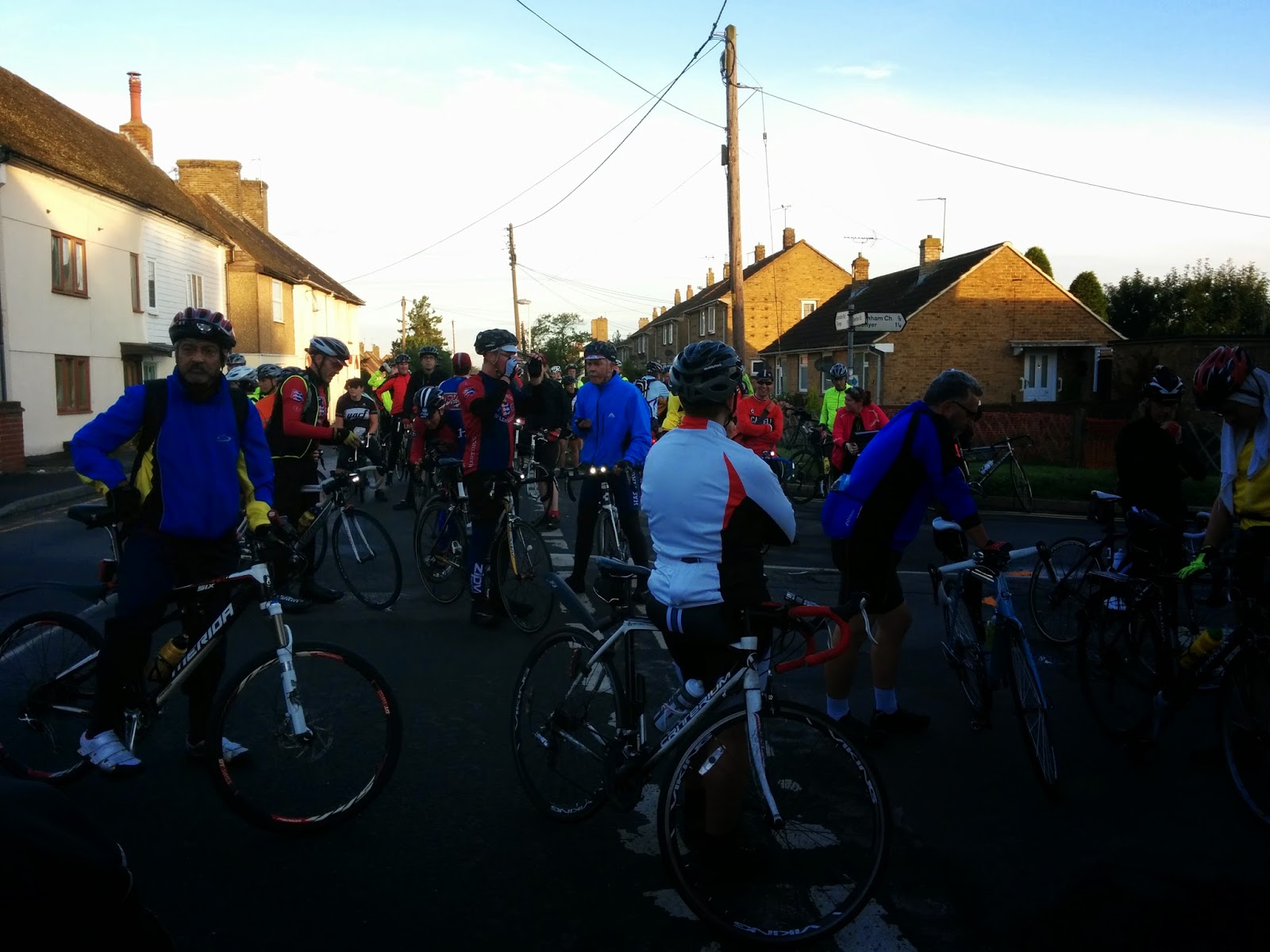 As we entered the rather lovely market square of Faversham when waiting for the tail we watched market traders set up for the day ahead. 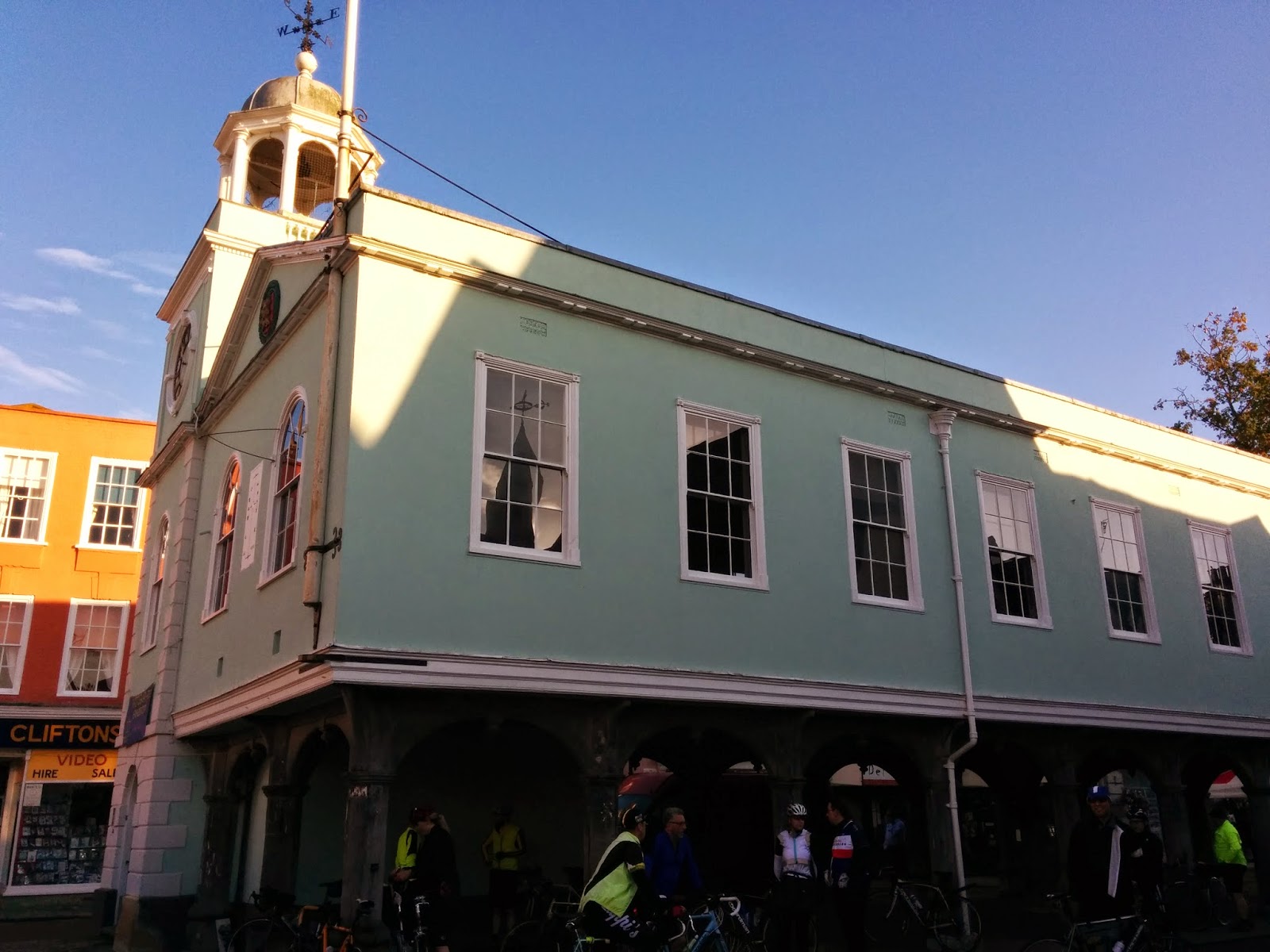 With the back of the ride broken and nearing Whitstable, progress of halted by a lorry nervously trying to go under a lowish bridge. The lorry was guided slowly much to the annoyance of the driver of the red car who shouted out helpful comments such as, 'come on. You could get a bus under there!' Well, you probably couldn't have got a bus under there as the lorry was too high and had to reverse much to the frustrations of the car driver. 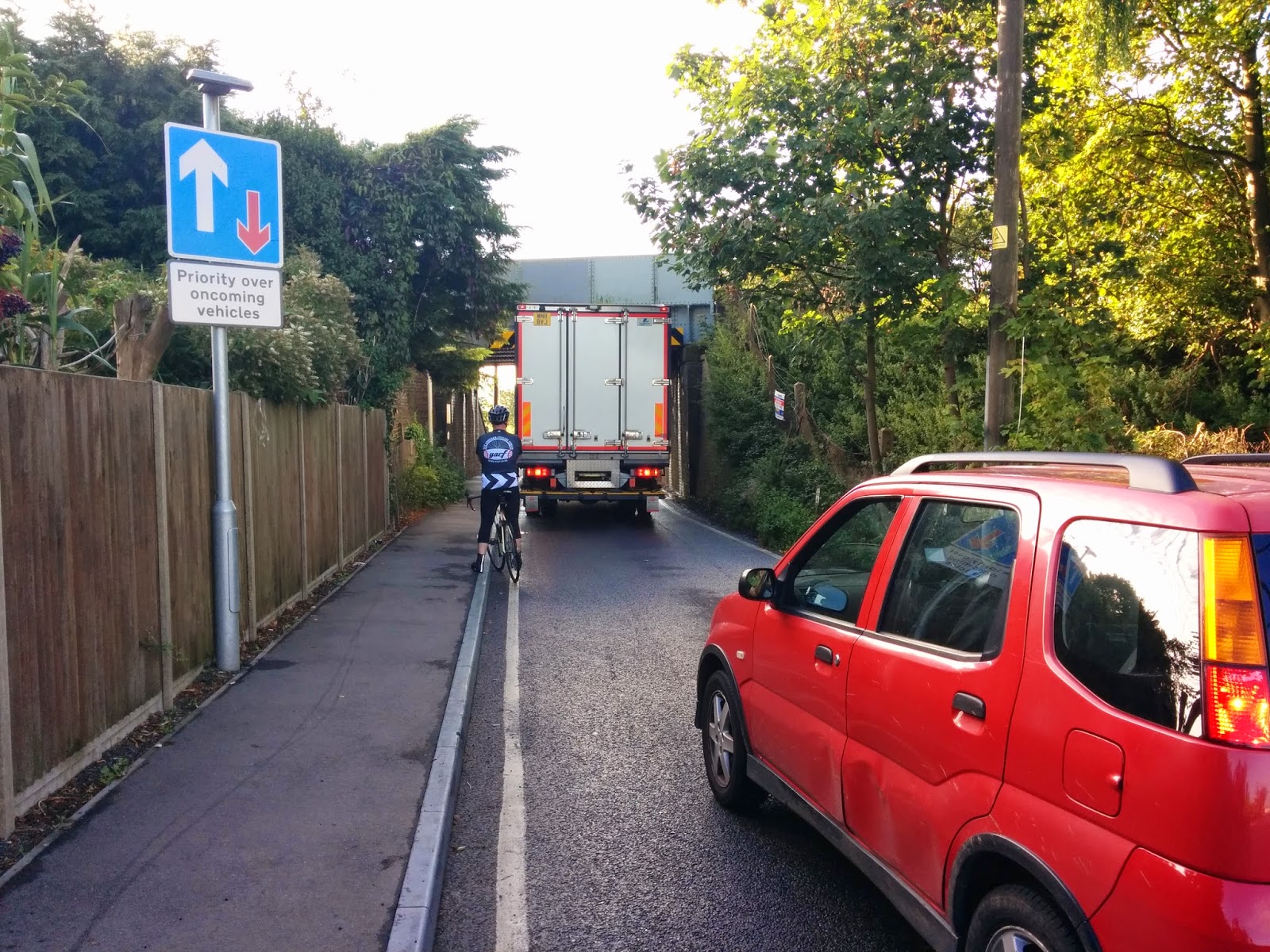 With the sea on our left we approached Whitstable and moments later we had reached the end. We had done it. 67 miles completed in good time at a respectable average moving speed of 12.8 mph.

I think that Geoff was ordering his breakfast when Anne and I arrived. We decided to take the obligatory photo of our bicycles with the sea in the background before racing to Whitstable railway station for the next train back to London Victoria. 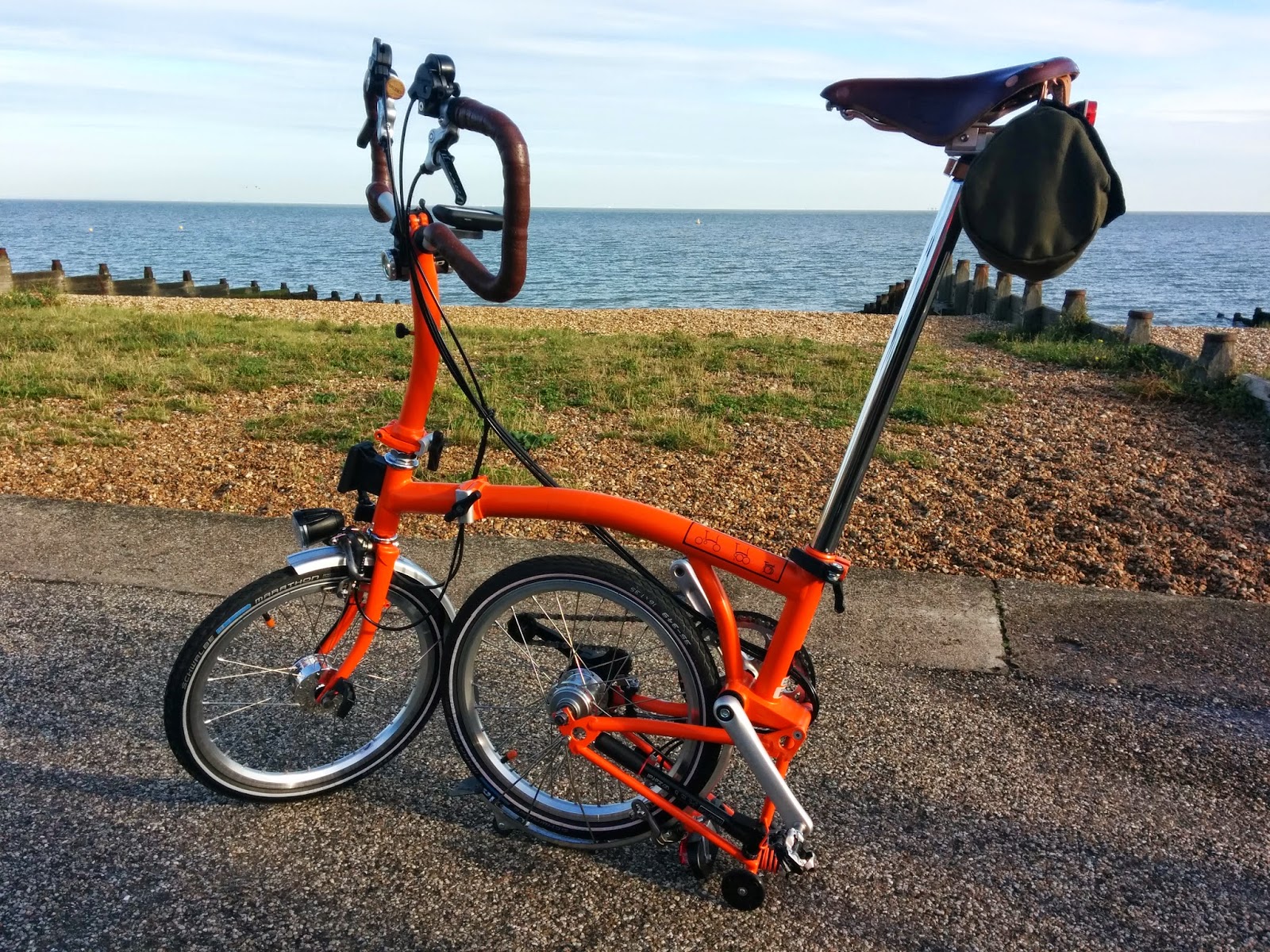 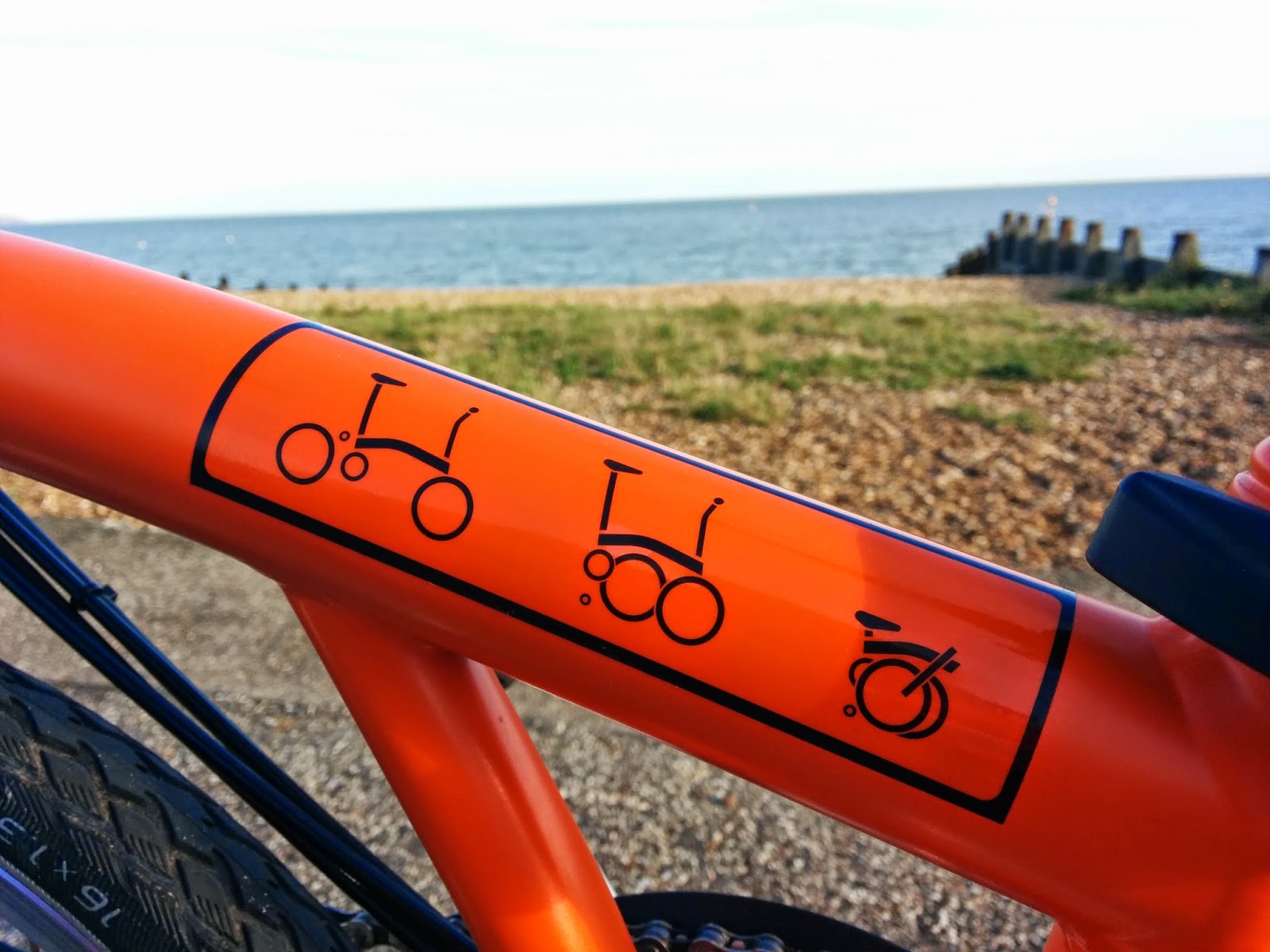 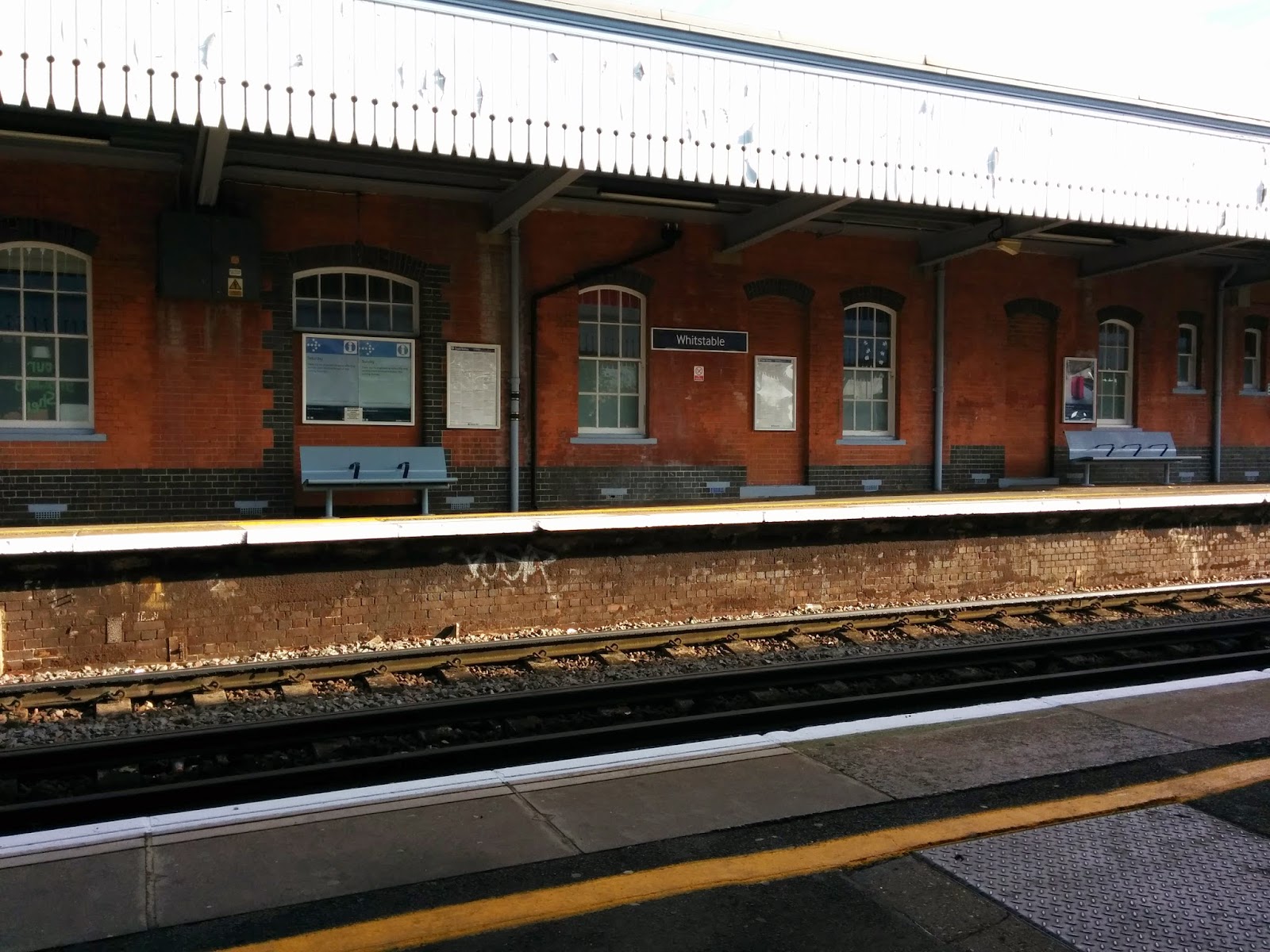 The rain arrived promptly and luckily Anne and I were able to get some seats with space for our Brompton bikes in front of us. Just over an hour and a half later we arrived at Victoria. Saying our goodbyes until next time we went our separate ways. As for Geoff, he was cycling back to Gravesend, getting the ferry and then cycling the rest of the way to Southend! In all he did 67 miles for the London to Whitstable and then another 61 miles! Chapeau!

One funny note. When we went through the ticket barrier at Victoria the staff member asked us where we had been or where we were going. When we told him that we had done 67 miles overnight London to Whitstable he was incredulous. The thing about these little Brompton bicycles is that although king of the shorter distance commute, they are so versatile they can also tackle these longer adventures with ease.

Once back at Hyde Park corner I saw two men standing on the top of the structure in the picture below holding a protest. Why they could not be removed there and then I do not know but with several Police Officers having to deal with this, it seemed a waste of their valuable time.

The Whitstable ride is always a good one. Plenty of hills to keep one on ones toes but nothing too serious and a distance that provides a good challenge. A big thank you to Simon for organising and to his team to Tale End Charlies. It was also great having the company of Anne and Geoff.

I will provide a more detailed picture of what I think about my new P Type another time, but I really do like it. It isn't for everyone, is different and the reduced real estate in terms of handlebar mounted gadgets, light etc.., when compared with the M and S type might be a no no for some. I like it!

When I go home and was quickly giving the bike a quick clean I noticed that the nut on the rear wheel was almost ready to come off. Thankfully, I spotted it and I am glad I didn't ride any more as I suspect it would have worked its way off completely. Oh dear! One of those things I suppose.