My Review of my new Orange P Type Brompton P6L

As I am sure you are aware, I have a new Orange Brompton. Using it the past few weeks has been a gleeful experience and I now feel in a position to say what I think of it – which many of you have asked me for.

Okay, I had better start with the specifications. The bike was a bespoke order and I deliberated long and hard about what I would and wouldn’t get: 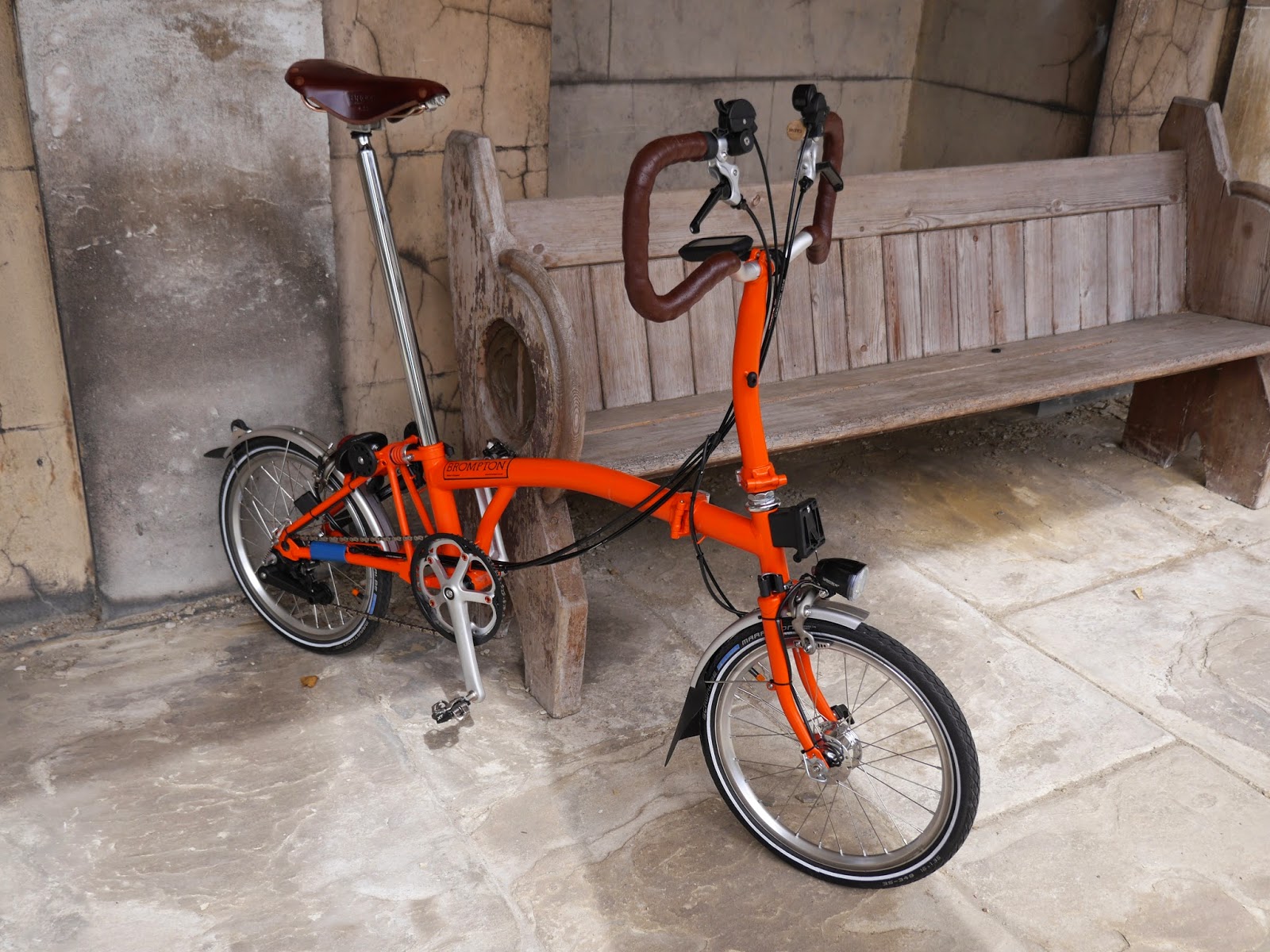 Essentially, I suppose I wanted this Orange Brompton to be a touring bicycle. Comfort and being practical were important factors. The SON Dynamo lighting system was chosen unashamedly to make night rides (I go on lots of these) and my commute easier. More about this later but I didn’t want to bother too much about lights and batteries, especially on my daily commute. During late Autumn/Winter my commute to/from work is often in darkness. 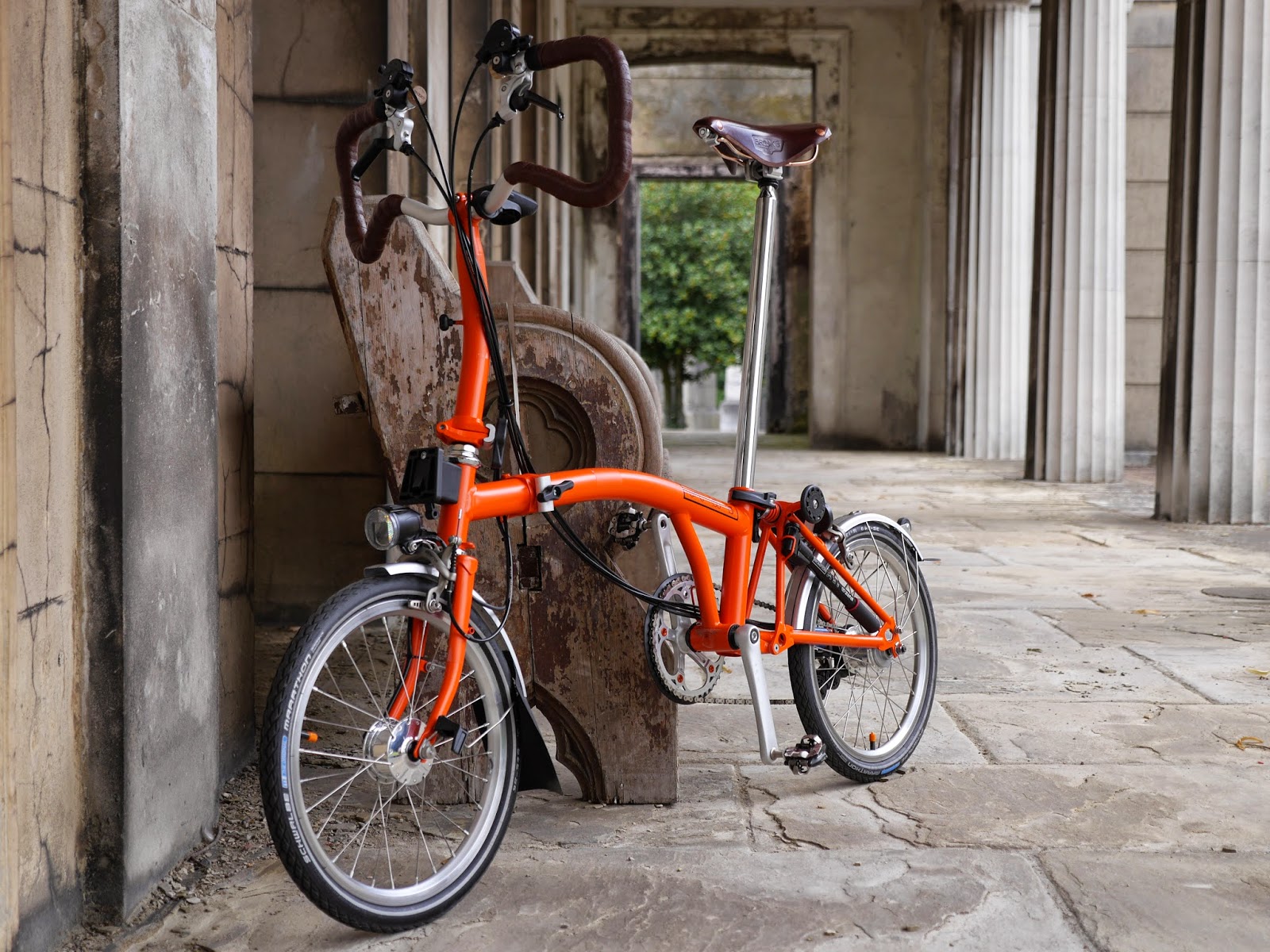 The reduced gearing was chosen for two reasons. First the SON Dynamo would make pedalling a little harder. Second, I was happier to sacrifice some top end speed to make über hills easier to ascend. The strange thing since using the bike is that for me at least I have detected very little resistance at all when using the SON Dynamo. As such, I may well end up swapping the 44T chaining for the standard 50T. (To be honest I have not encountered too many problems ascending hills when using a 50T anyway).


The P Type bars. Some of you may be wondering why I opted for them. They aren’t the most popular bar type in the Brompton range and some people hate them, going as far as saying they are ugly. Having had a go on a P Type many years ago I liked the riding position. With the addition of the Brooks leather bar tape, to compliment the Brooks saddle, I think there is a certain elegance about them.

The P Type, for me at least being quite tall affords an excellent riding position. There are a couple of caveats if you are thinking of following suit. First is handlebar real estate. If you have loads of gadgets you want mounted to the bars, it is possible on the P Type but the amount of usable space is a little reduced. The SON Dynamo lighting system does however mean that I don’t feel the need to have as many lights as I used to. Second, if you are…how can I put this…possessing a paunch, you might find the lower riding position uncomfortable. Thankfully, cycling so much has kept the middle age spread at bay, so the lower riding position is fine for me.

As far as comfort goes, I have Brooks leather bar tape with some gel strips at crucial positions. Recently I went on a 67+ mile ride from London to Whitstable and suffered no hand aches or pains. There are lots of places to position ones hands (in addition to the lower position) resulting versatility and comfort.

A Brooks saddle looks really good on a Brompton and as I have always got on well with them I had to have one. When you order a bespoke Brompton the cost of the Brooks is offset against not having the standard saddle. This means that you get a Brooks Special edition for a good price.


Proofhide has been applied twice since I got my P Type and it has for me at least been very comfortable. I like the copper rails and pleased that the colour will only get better as the saddle gets older. It will also get more comfortable as it ages which is a bonus.

The SON Dynamo lighting system has so far been more than worth the hefty price tag. This is a little marvel of engineering. The whole setup weight a little over 200g and has little rolling resistance. There are lots of boring statistics to tell you exactly what this is but I will put things more plainly. Either on of off I cannot detect that is it there and it certainly - for me at least - doesn't make pedalling any harder - including ascending hills which I encountered on the London to Whitstable ride.


The rear light with the SON Dynamo produces a much brighter light than the battery version and the stand light function means that when you have stopped both front and rear lights stay on. The front light is excellent. It produces a bright, whitish light that does an excellent job of illuminating the road ahead. Let's be clear about this. It is not a commuter light that allows oncoming traffic to see you from considerable distances. It does this to some extent but I would add a small flashing light for this purpose.


On the London to Whitstable ride, once we were out of the urban sprawal and entered country lanes things started to become pitch black. I had brought my Hope Vision light with me but never had it on anything but its commuter flashing setting. SON powered front light instilled confidence. There was not a time when I felt I needed more light. For long stretches I turned off my Hope Vision light altogether to see what the SON powered one could do. It was excellent. 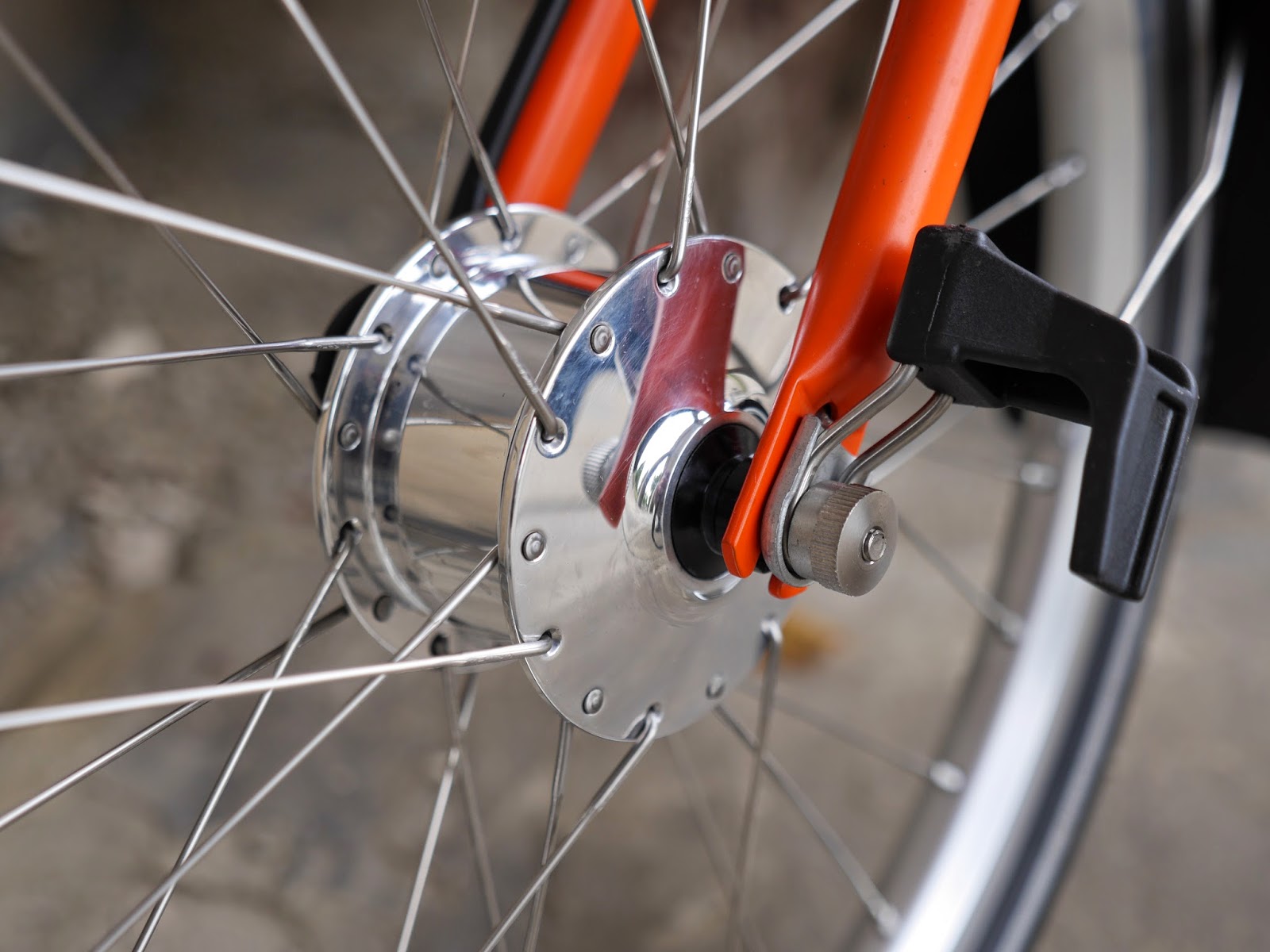 As on all Brompton bicycles there is subtle detailing that tells you and others your bike is a Brompton. The chain guard, cranks and brake levers all have the Brompton logo discretely placed. 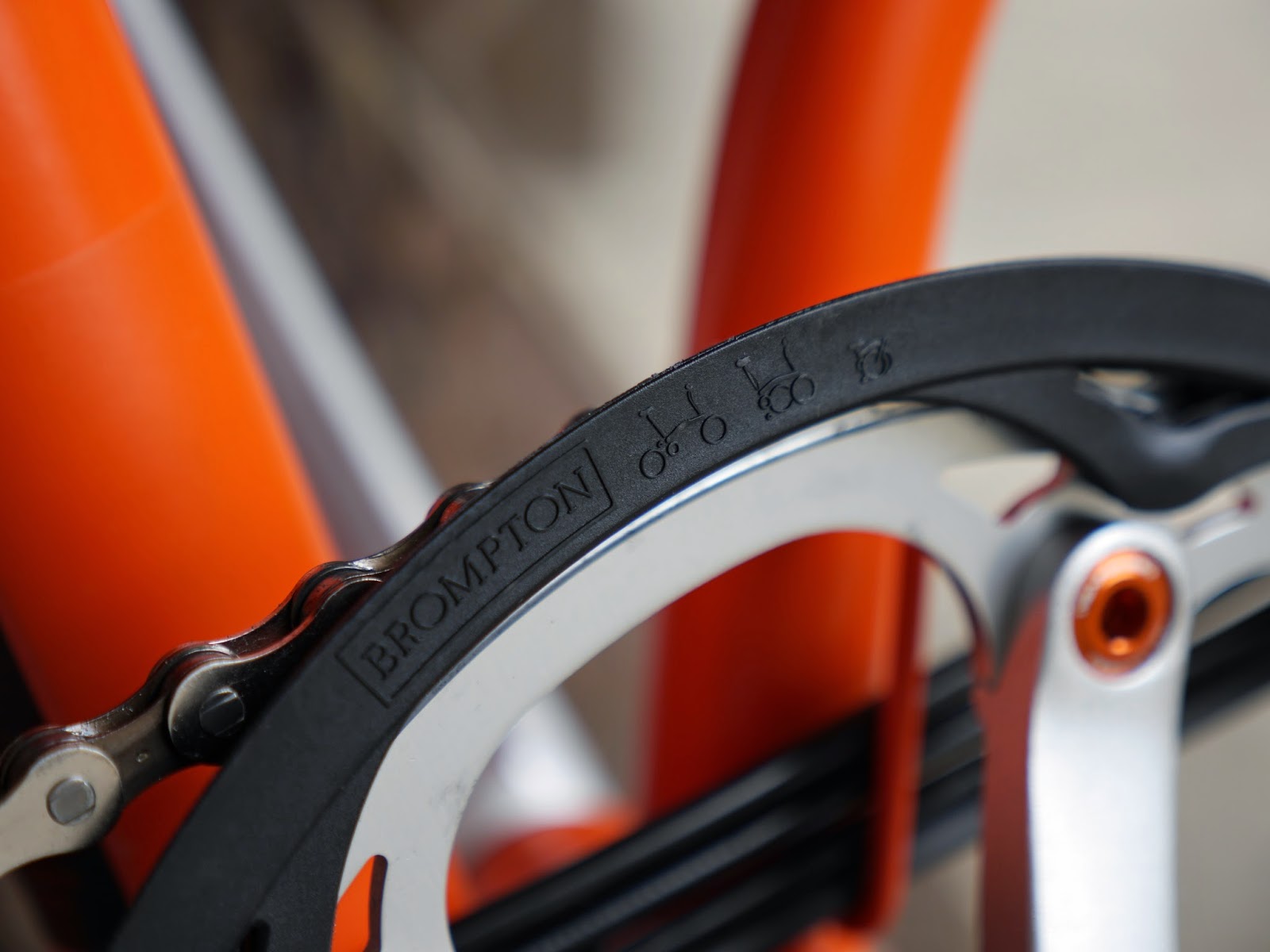 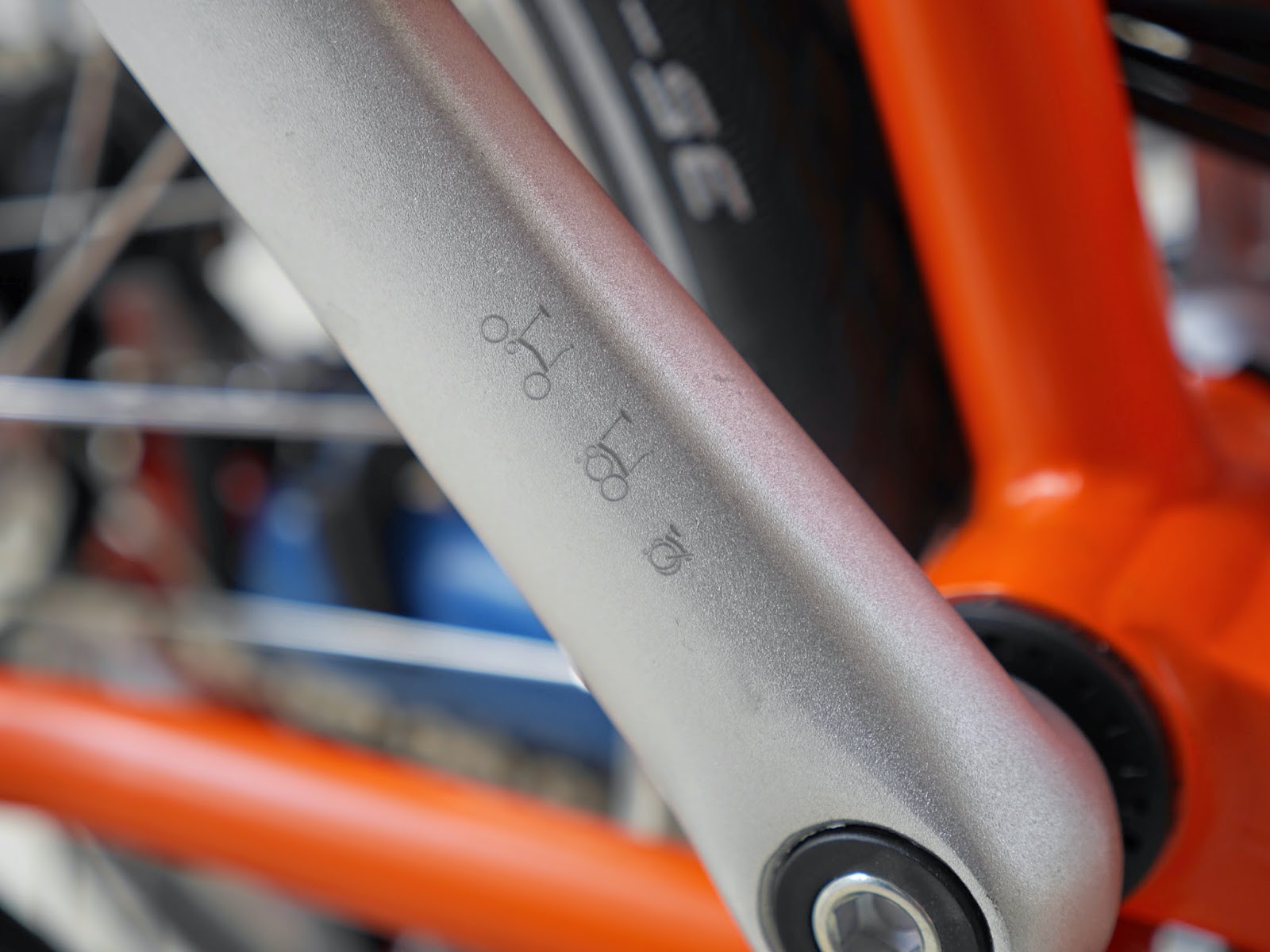 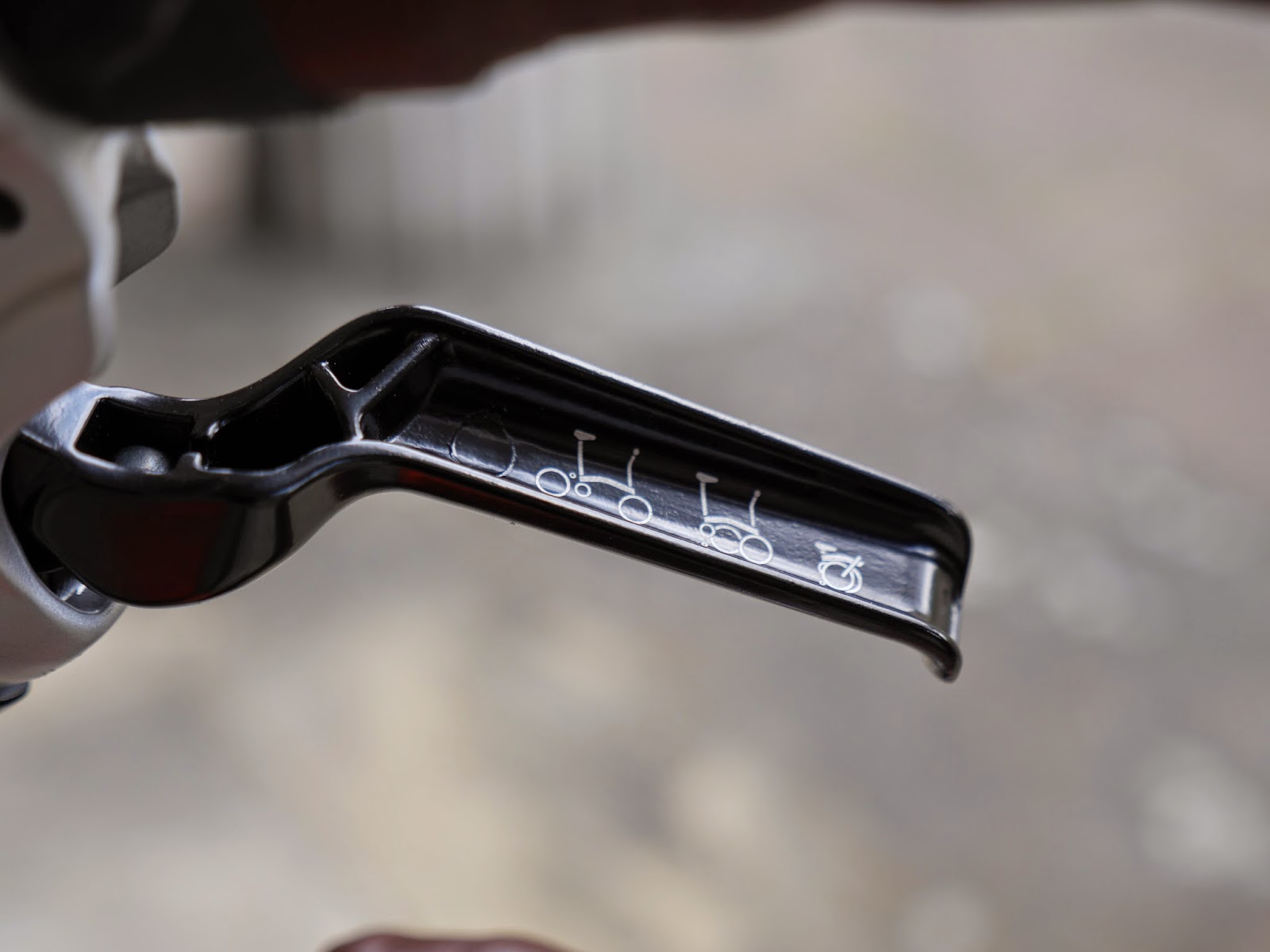 I have not been a fan of Brompton customisation as in my opinion they are a design classic anyway. I have made some changes. Some cosmetic, some practical and some a combination of these.

The first is the chainring bolts. Since 2013 Brompton bikes now come fitted with the spider chainring. This allows the user to swap their chainring easily. I replaced the original bolts for aluminium alloy ones that are...orange. They are also half the weight of the originals. 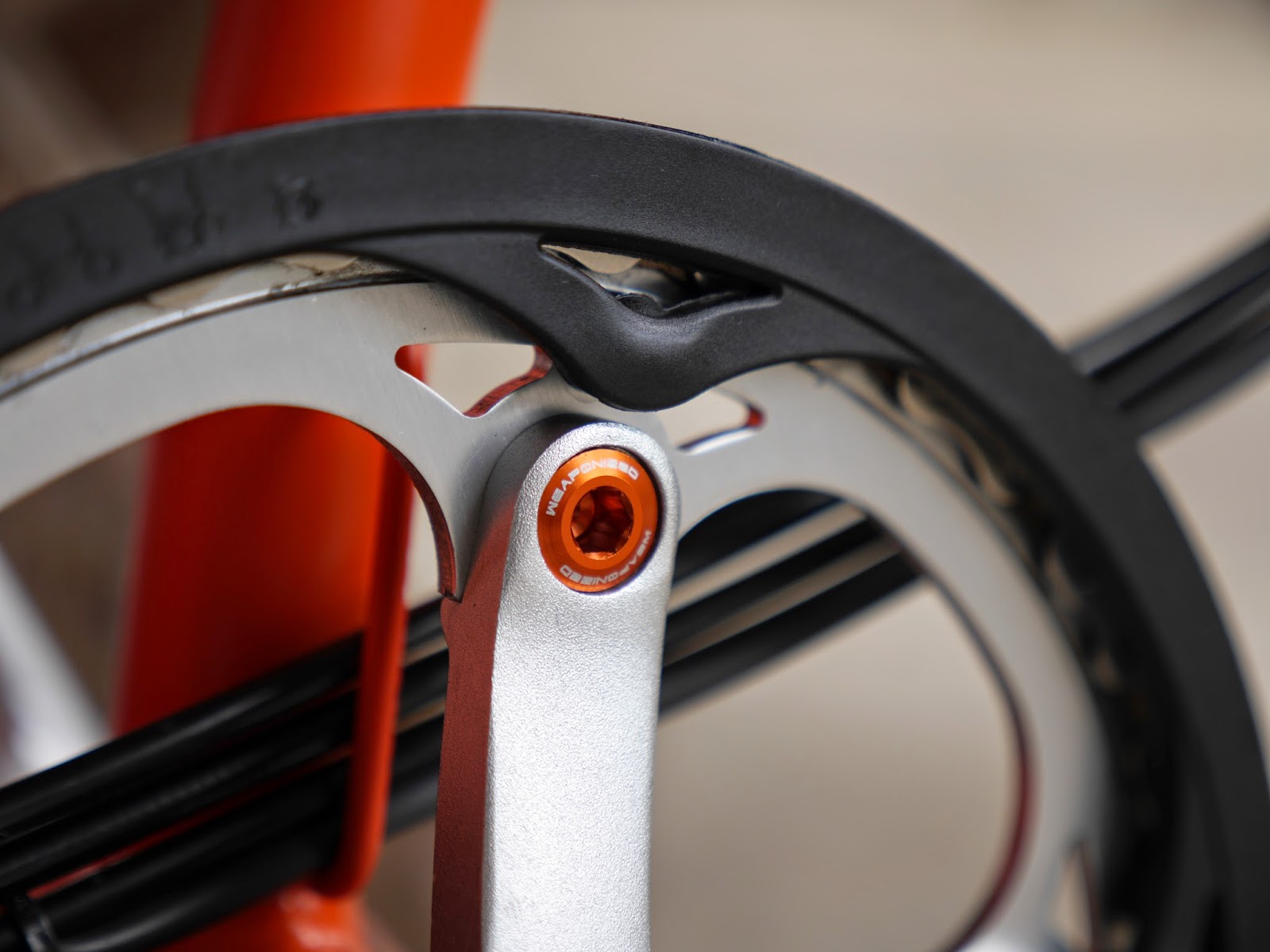 I have used clipped in pedals on all my Brompton bikes for some time now and took the standard pedals off almost immediately. The Shimano XT pedals are a favourite of mine and I really like them. 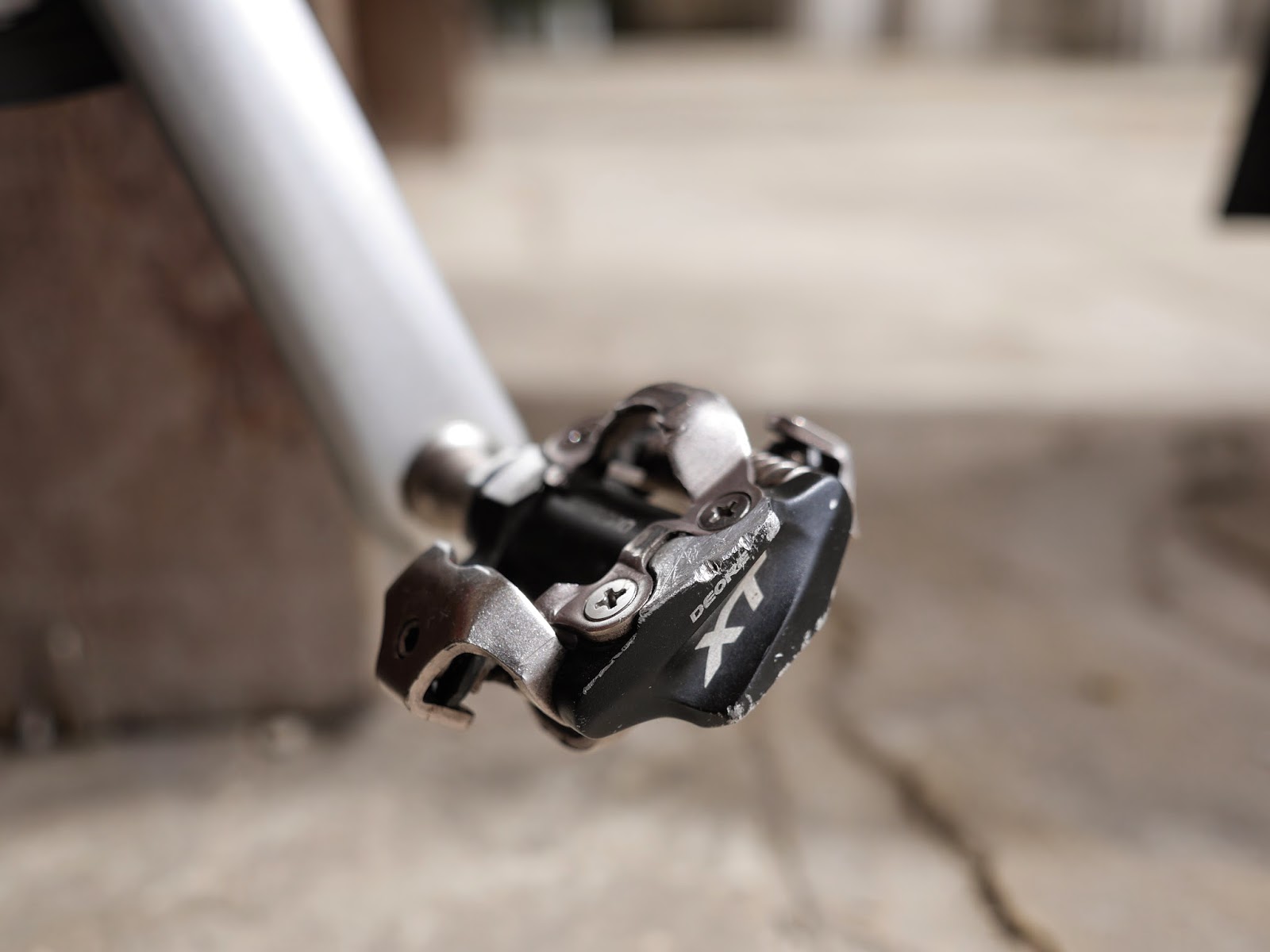 I had a spare front carrier block so this went on. This will allow me to use a wide range of Brompton luggage options I have build up over the years. I currently have:


I use these bags according to what I know I might be carrying and the great thing about the P Type is that all the above works. 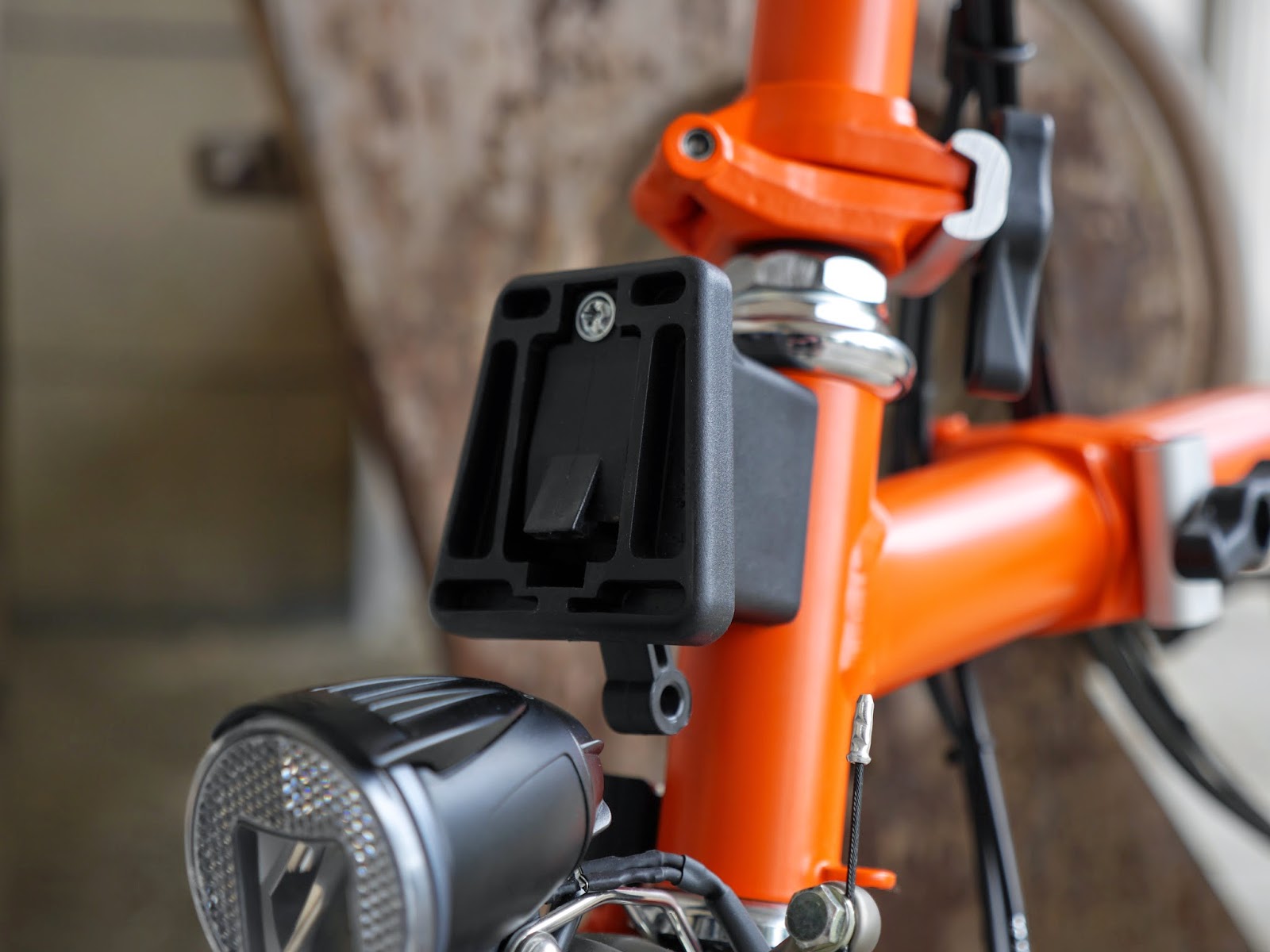 There was nothing wrong with the standard firm suspension block, but the one in the picture below by BikeFun is orange and a little firmer. 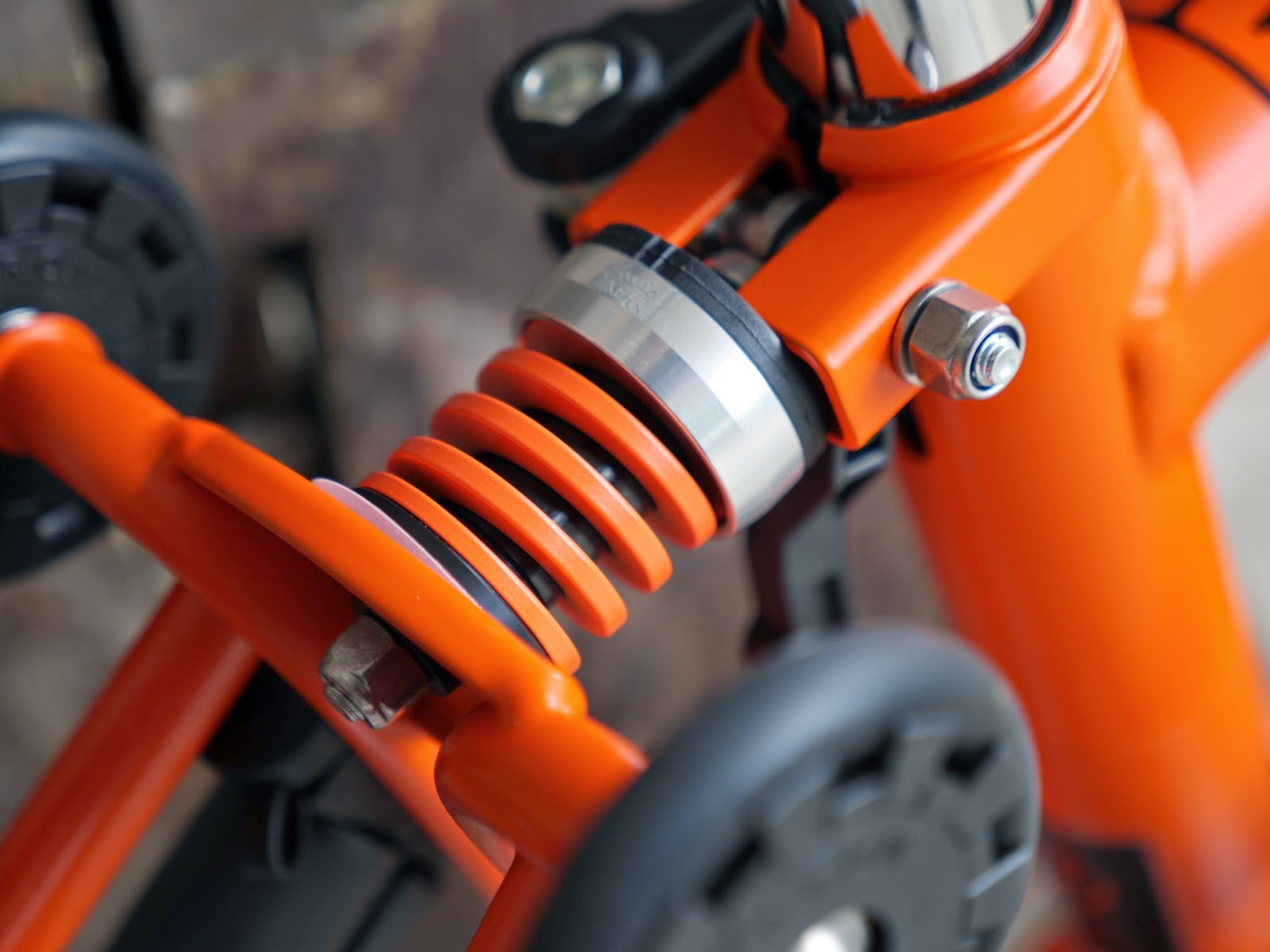 As I am sure you will have gathered, I really do like my new P Type Brompton. This bike will become quite a workhorse taking my on my commute and night rides. The P Type isn't for everyone. For some the lower riding position is too low or not safe enough without extra brake levers. Some may long for more handlebar real estate. For others it is not a looker. 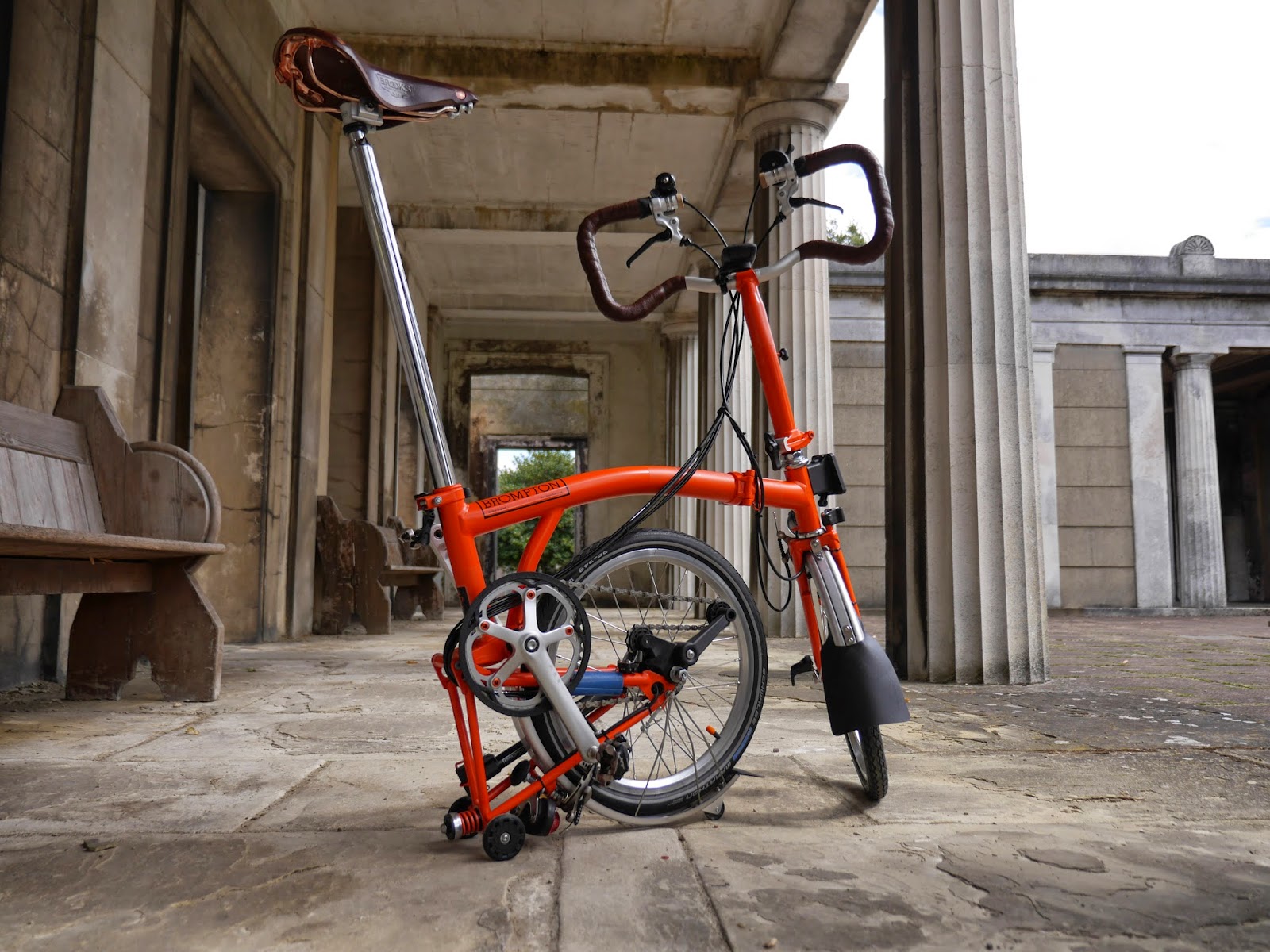 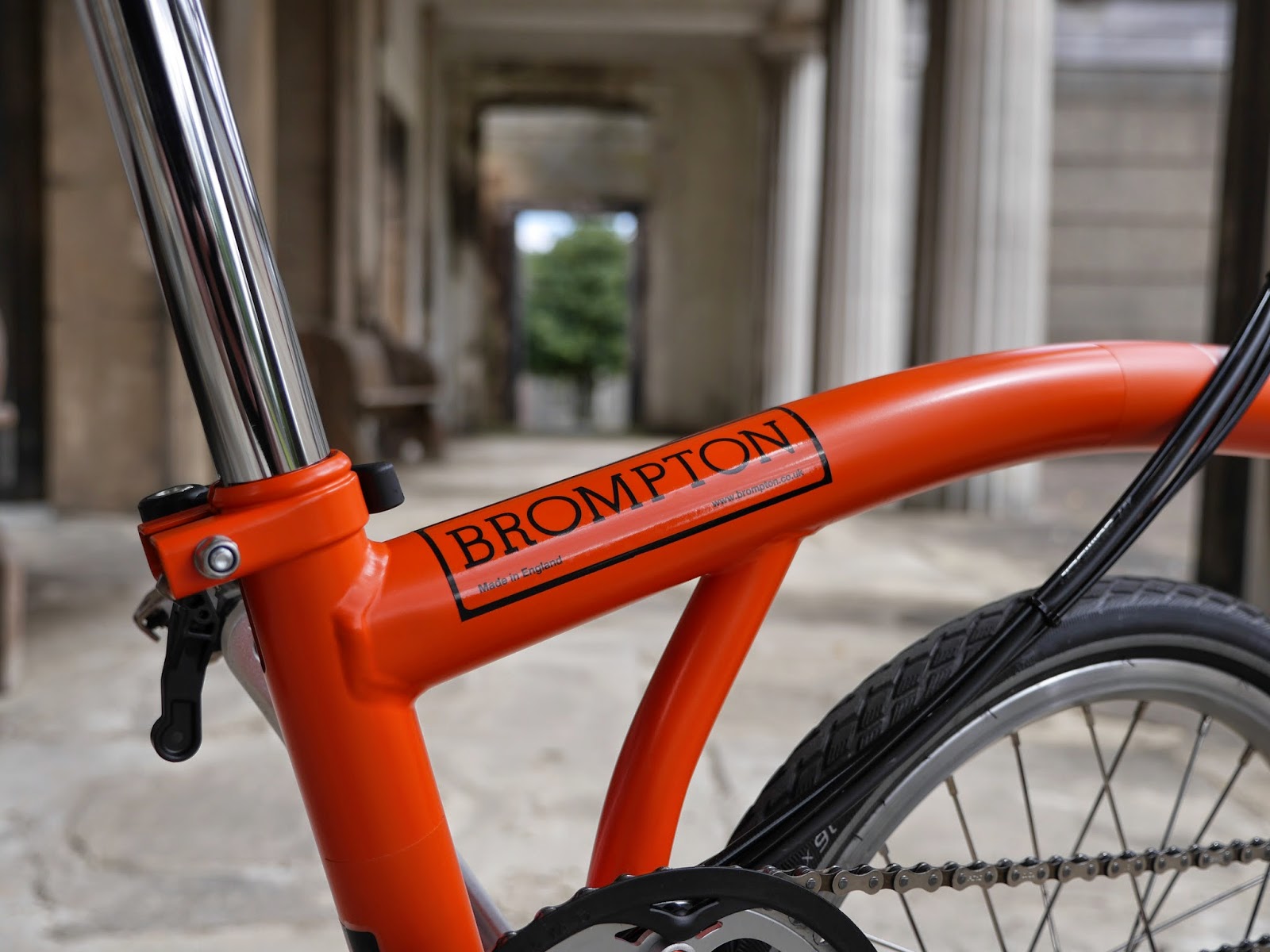 For me one of the attractions of a Brompton is its quirkiness. The P Type is certainly that. For me at least, I feel I have made a good choice and I can see us becoming better friends that we already are now. I have already been on a few adventures with this Brompton and you can be assured that there will be many more to come! 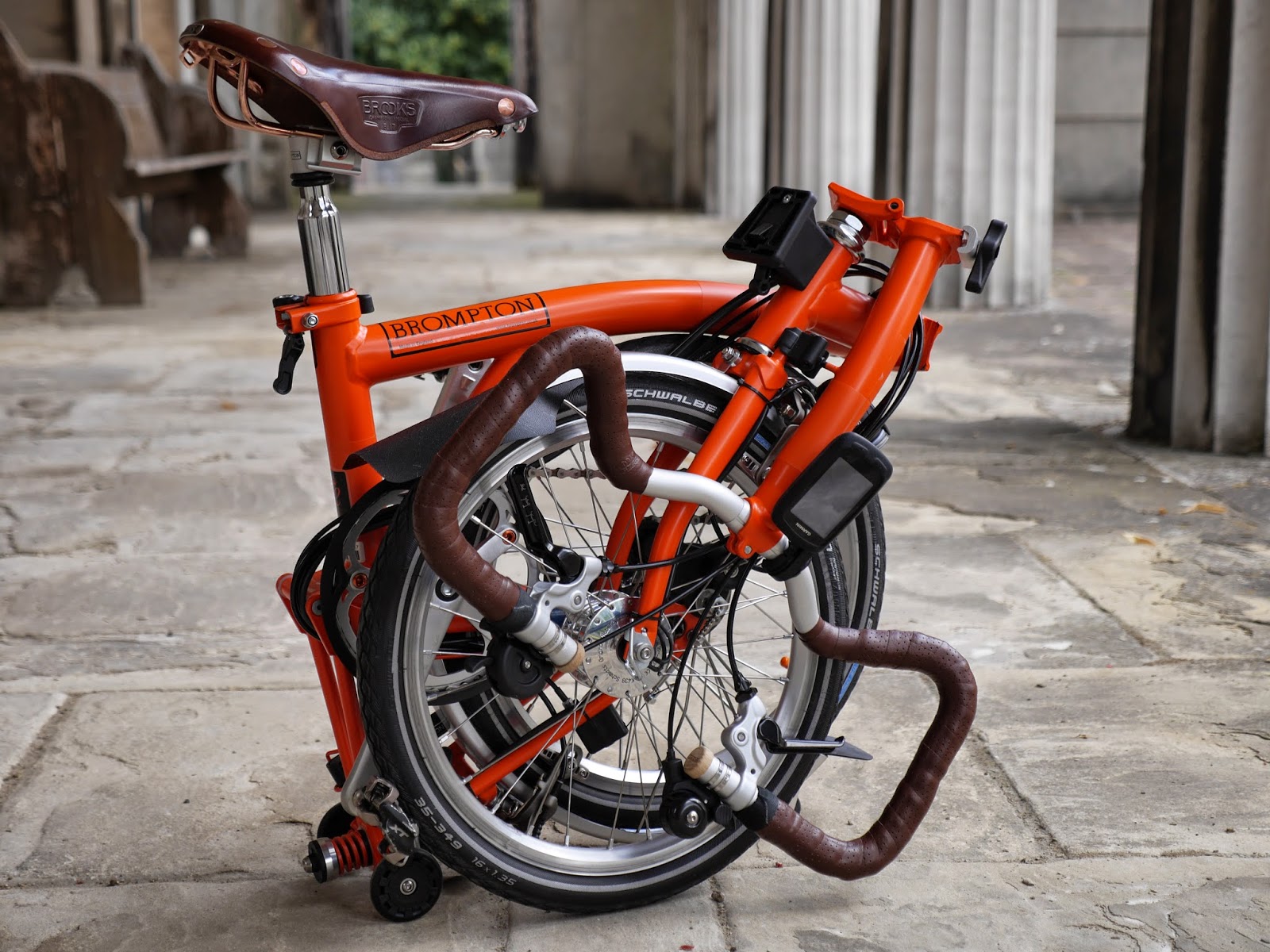