When I got out of bed on Sunday morning, looked outside my bedroom window the weather was indeed good. The sky was a glorious blue and only a few wispy clouds dared to encroach on the near sapphire sky.

Crossing the Hungerford foot bridge the views were wonderful. There were already lots of people milling around, perhaps taking the opportunity of good weather after the recent horrors of wind and rain. 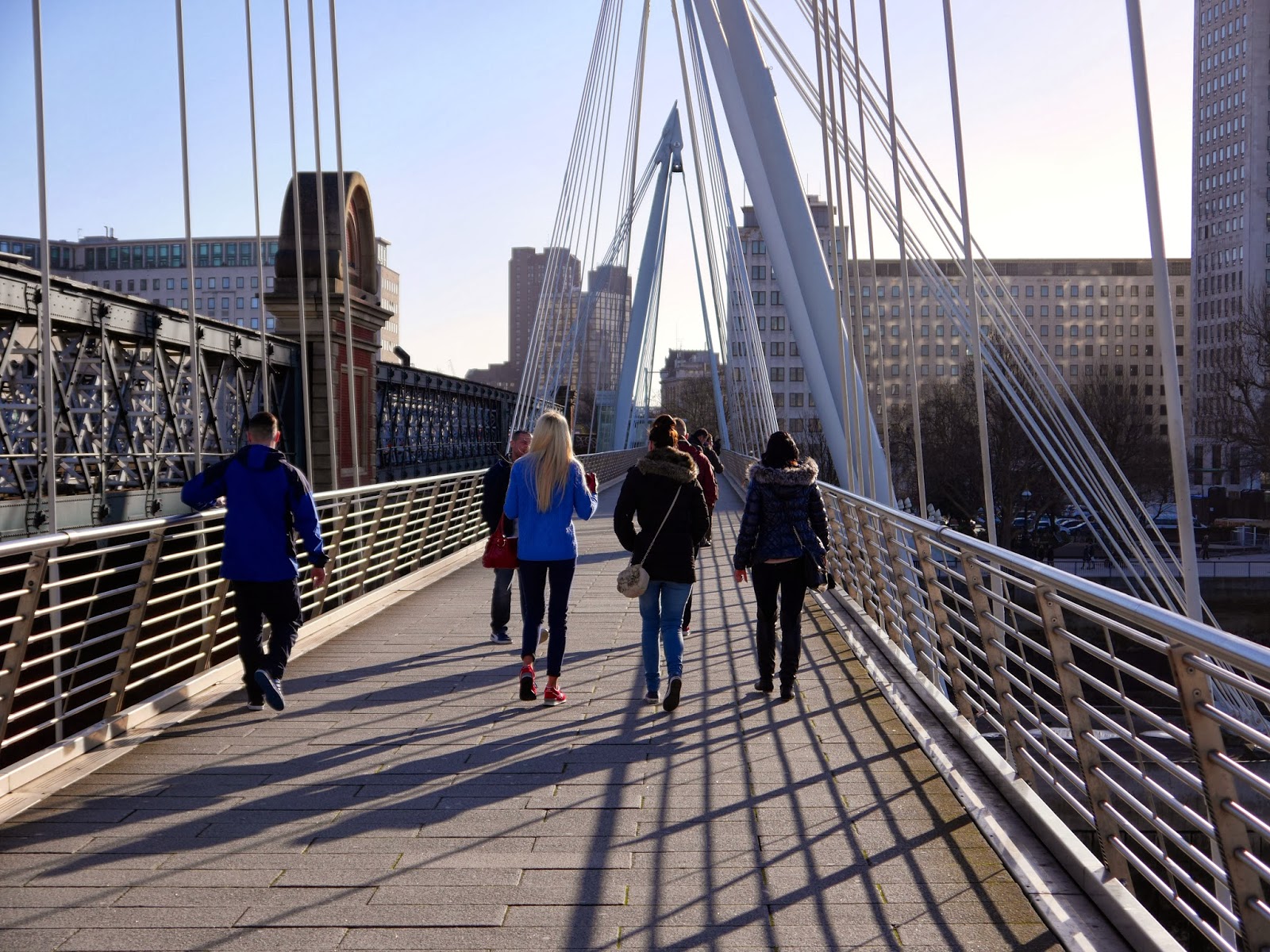 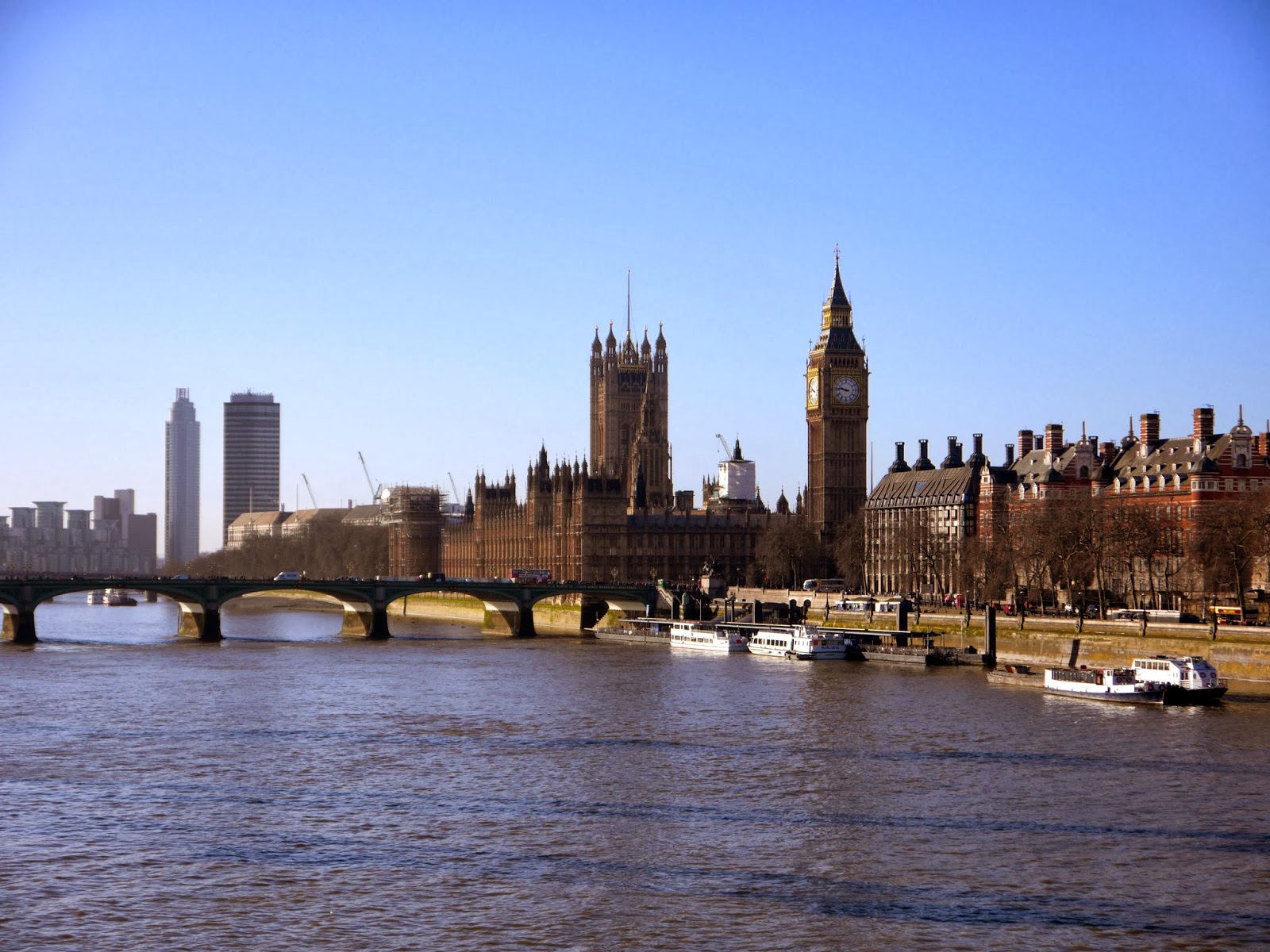 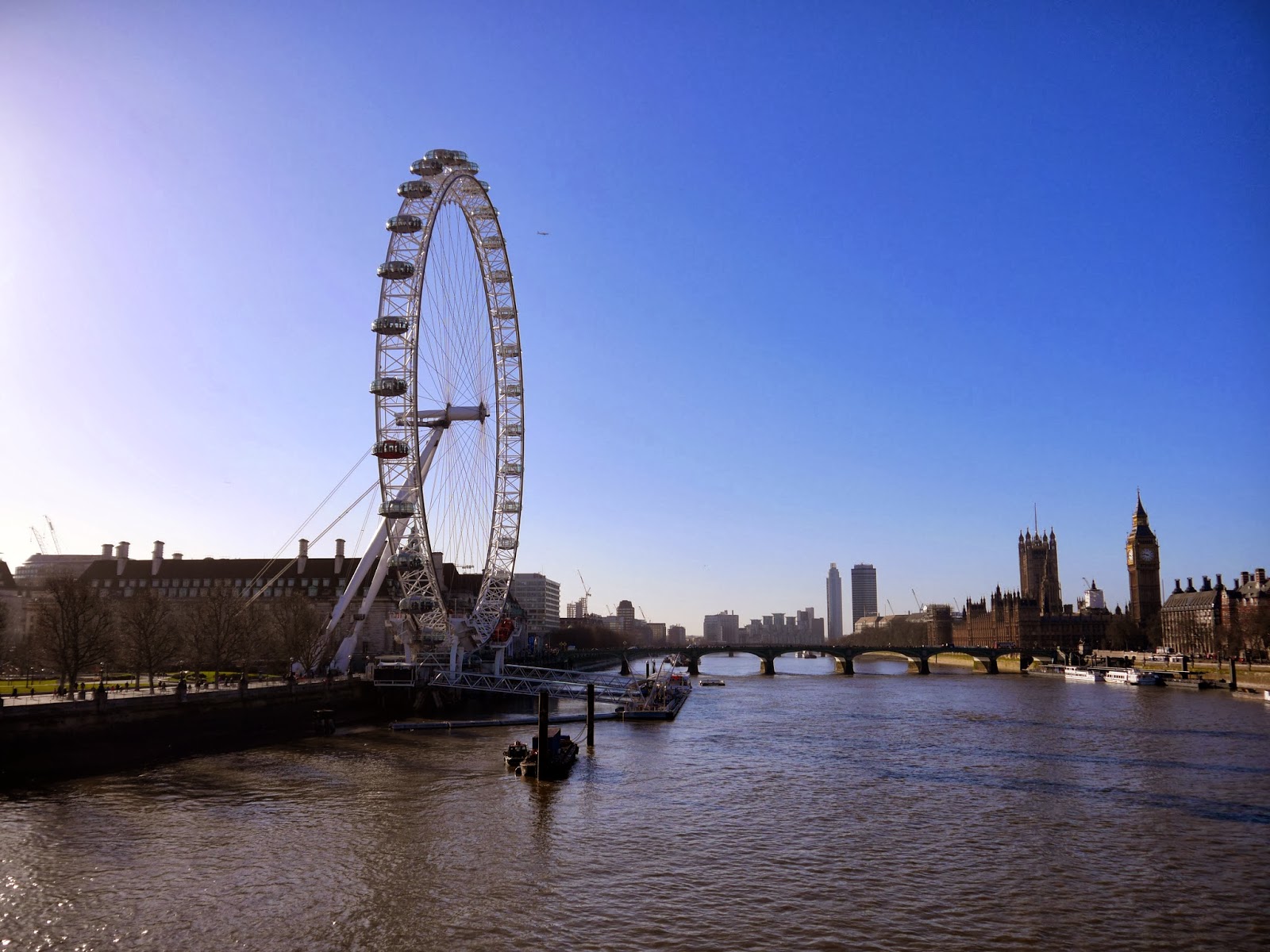 Setting out slightly earlier than I needed I headed for an Evans Cycles near the meet up point at the London Eye and got there when it opened. I had to return something I had bought online as they had sent me the wrong item. As I patiently waited for an assistant to count out 5 pence pieces before serving me, I decided that nothing would dampen my spirits on much a glorious day!

At the London Eye there were already a few fellow Brompton adventurers there and after saying hello I got to the ever gleeful activity of taking some photographs.

The whole area was busy and full of people. Lots of street entertainers were out in force - to varying degrees of entertainment. One was a lady in gold. There wasn't much going on in her act and my first thought was that it was like watching her gold paint dry. 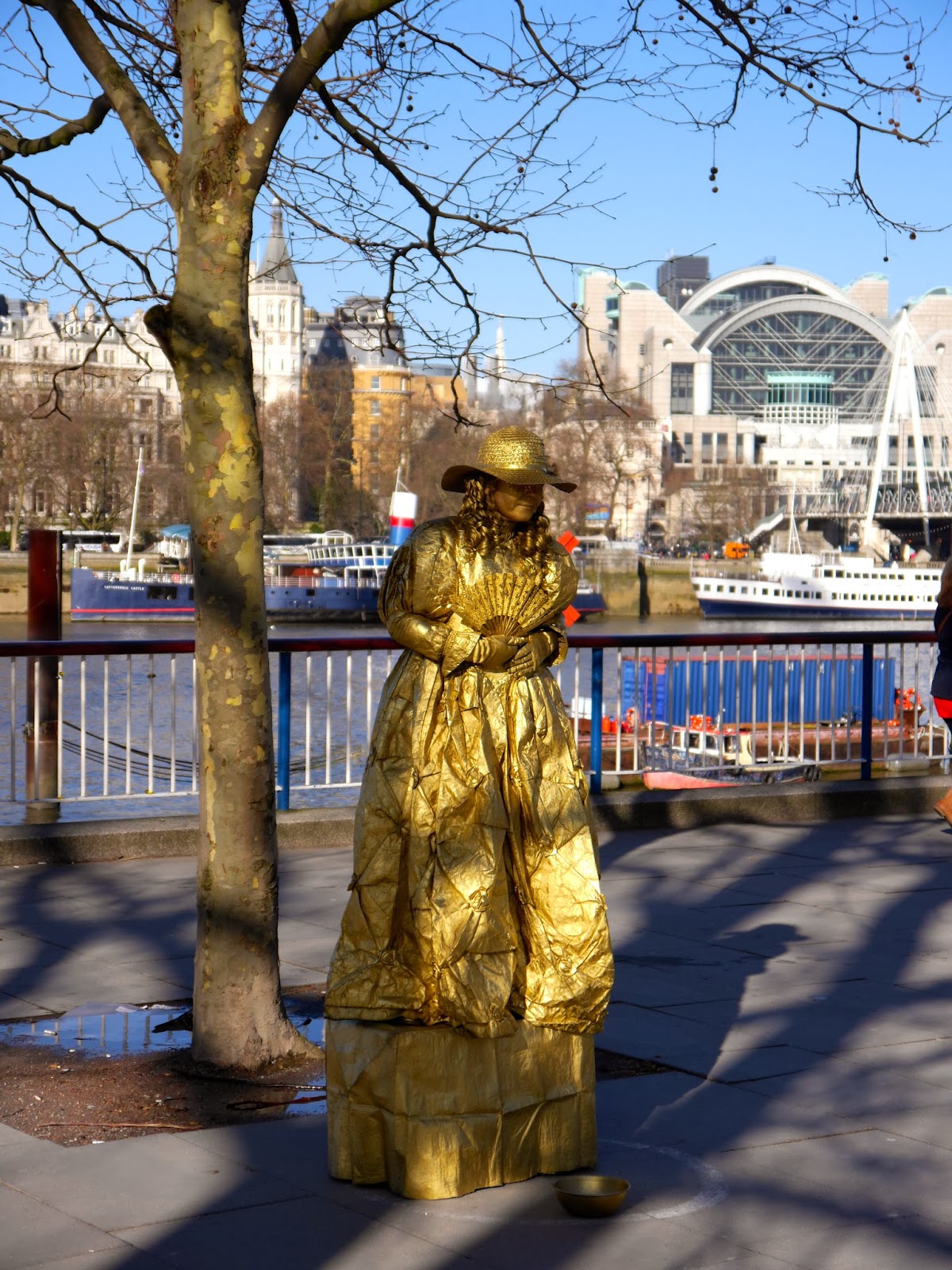 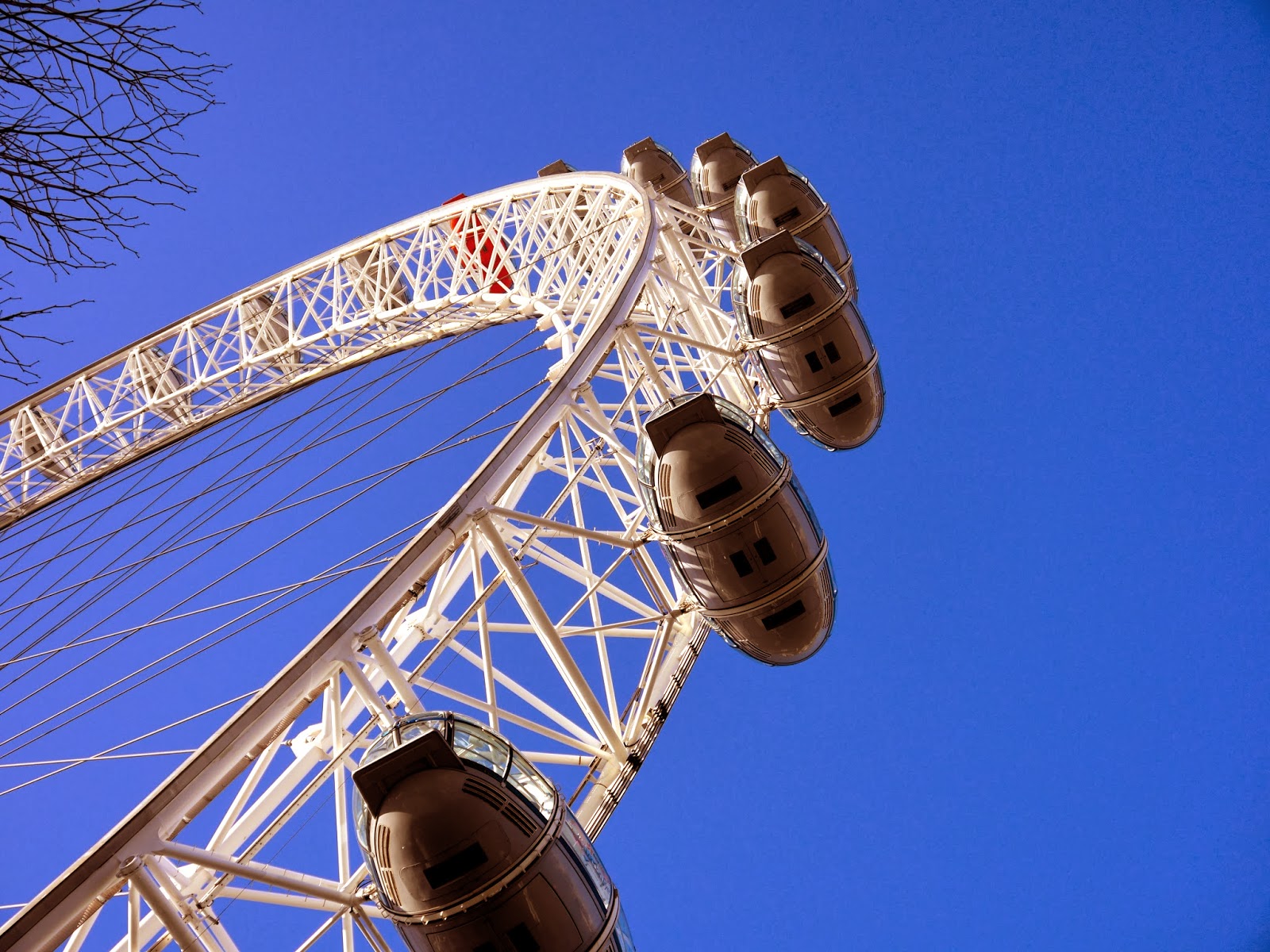 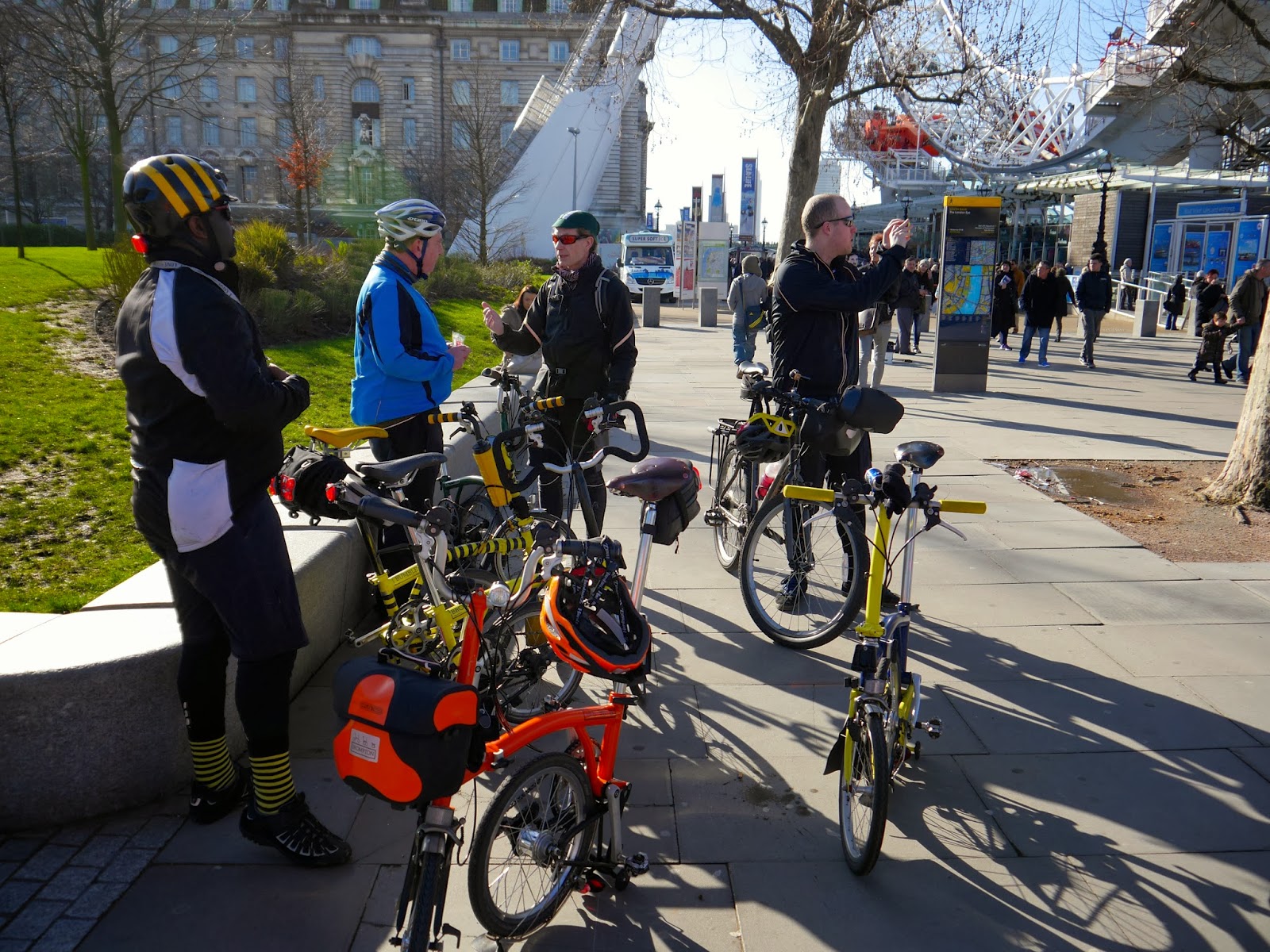 I decided to take my new Ortleib Mini O bag as i wanted to use it to carry my Lumix GH3 and a few other items. It is quite Tardis-like and there was no need to take anything other than a small wedge toolbar attached to the saddle.


After waiting a suitable amount of time for any late comers, we were off. Our first stretch saw us cycling parallel to the Thames and the views were fantastic. I decided to take my M6L for this ride for two reasons. The slightly more upright riding position would make taking photos on the move easier and I didn't want my Titanium Orange Brompton to get dirty! 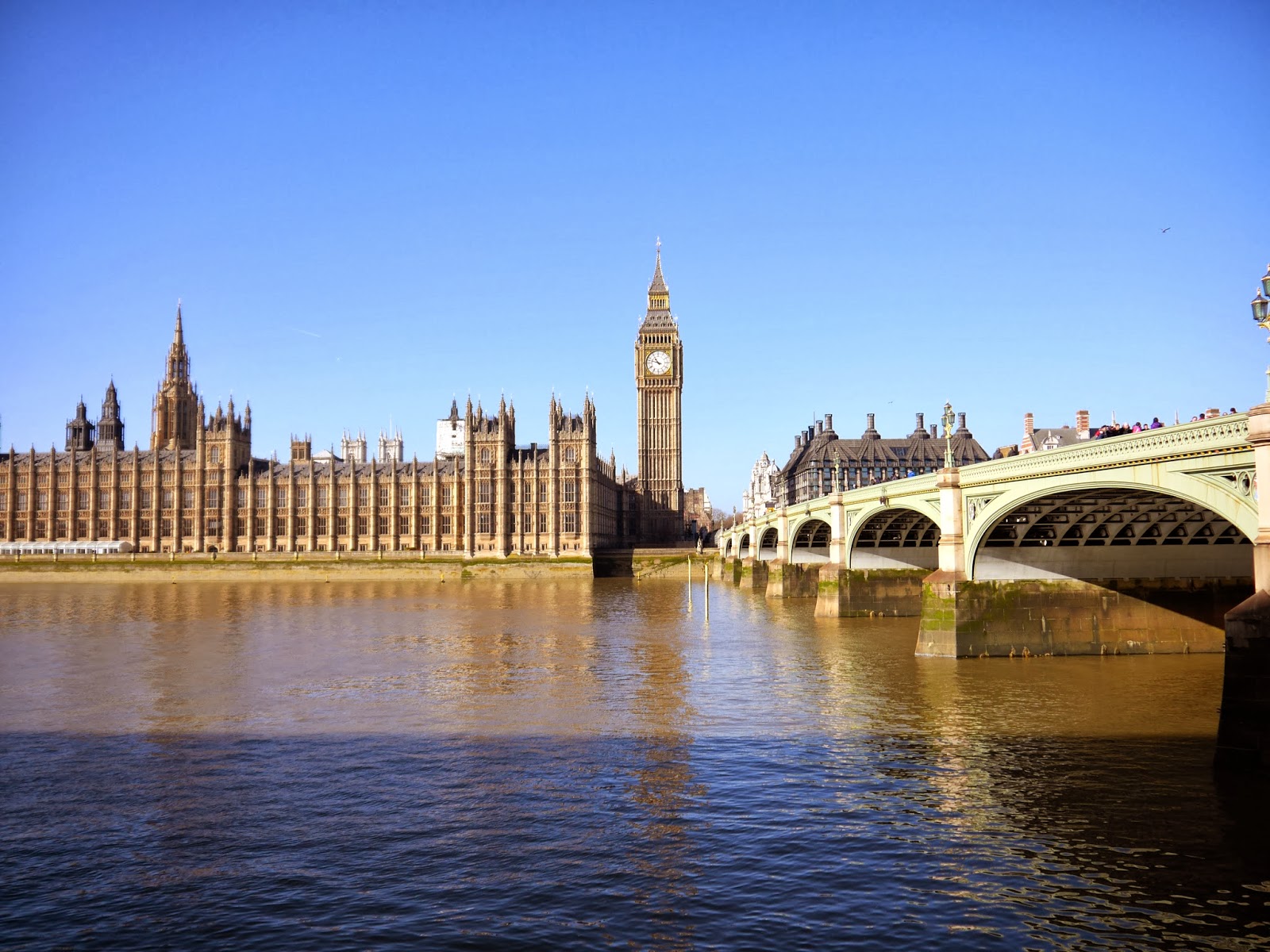 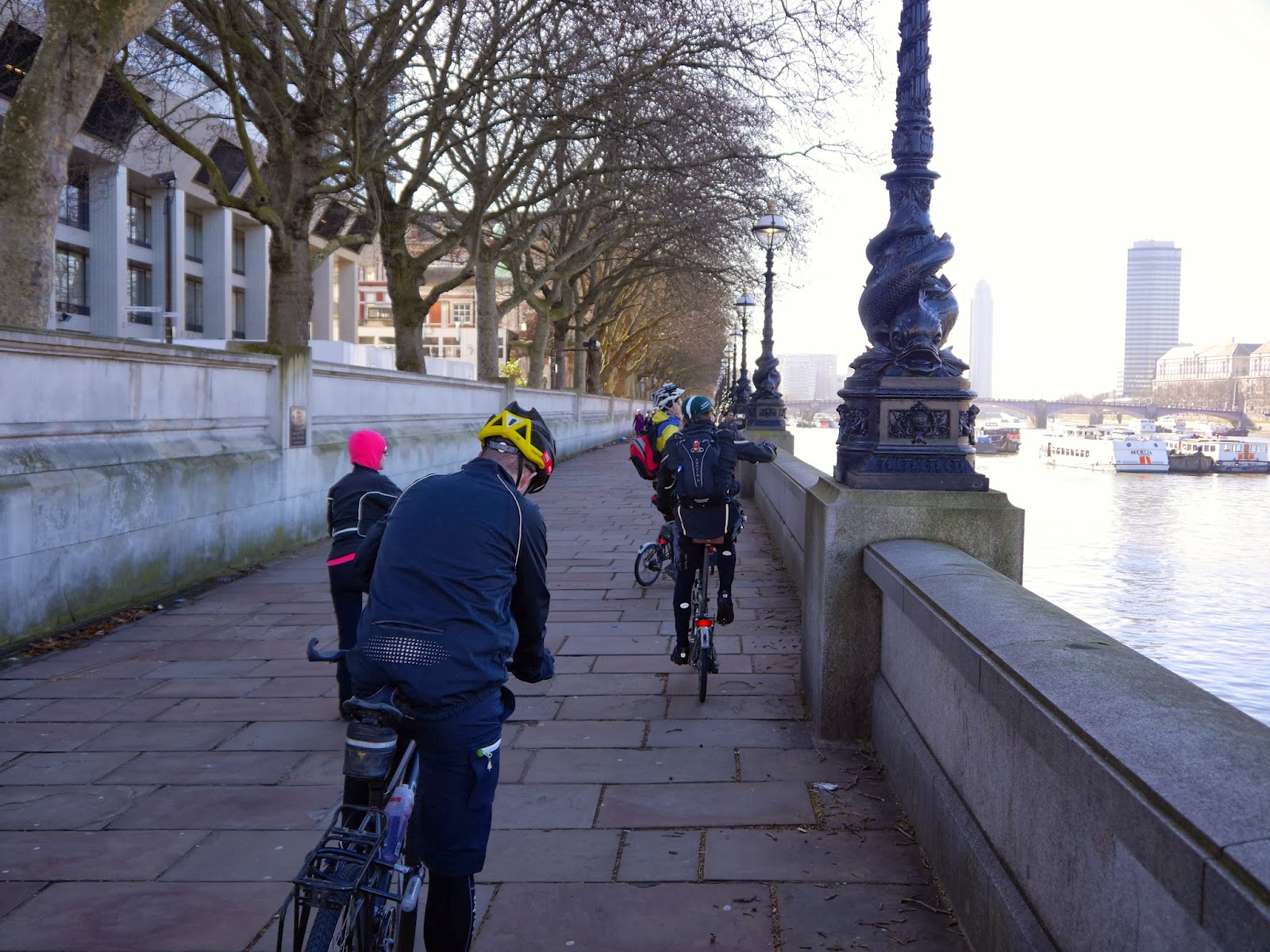 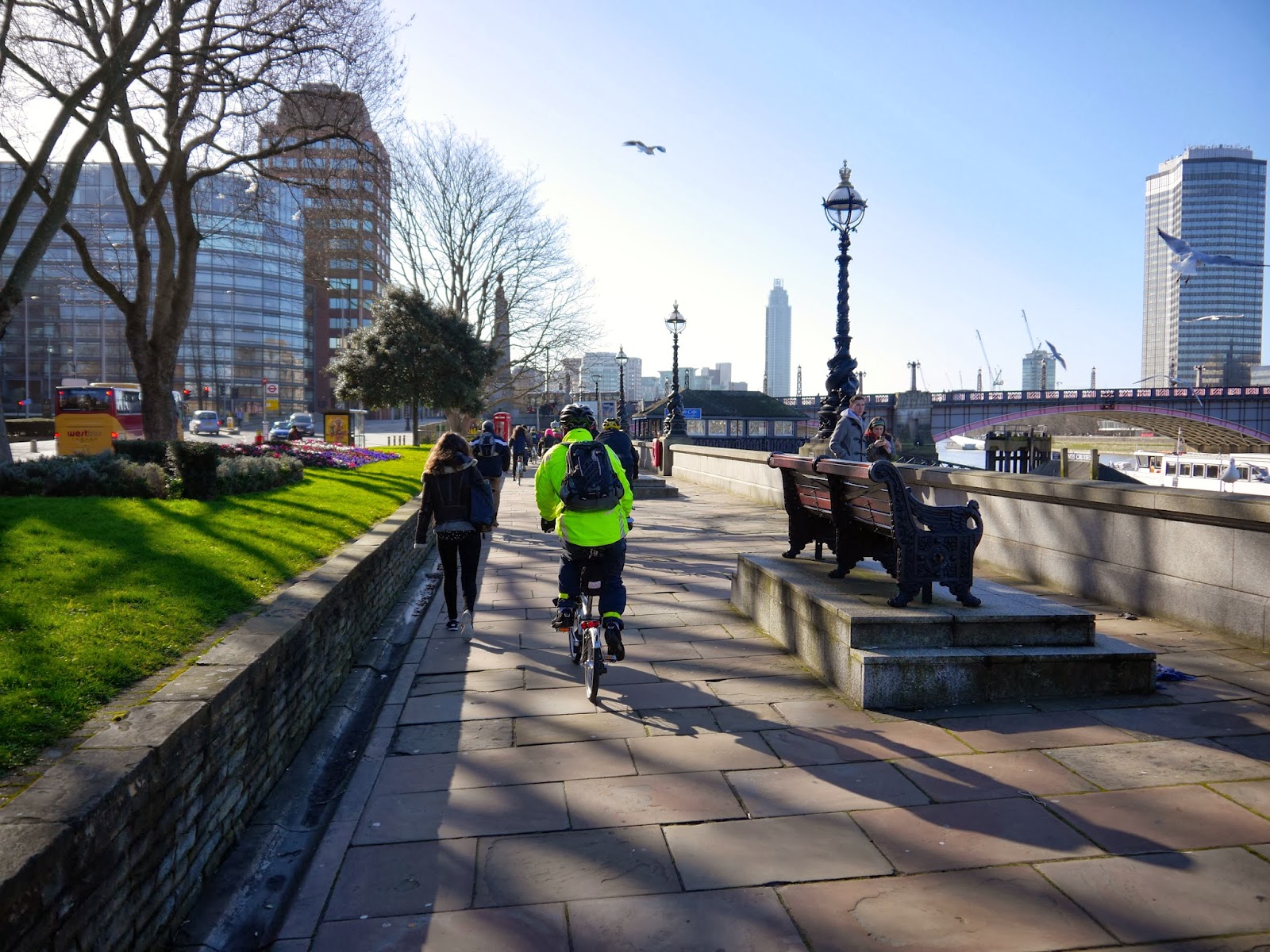 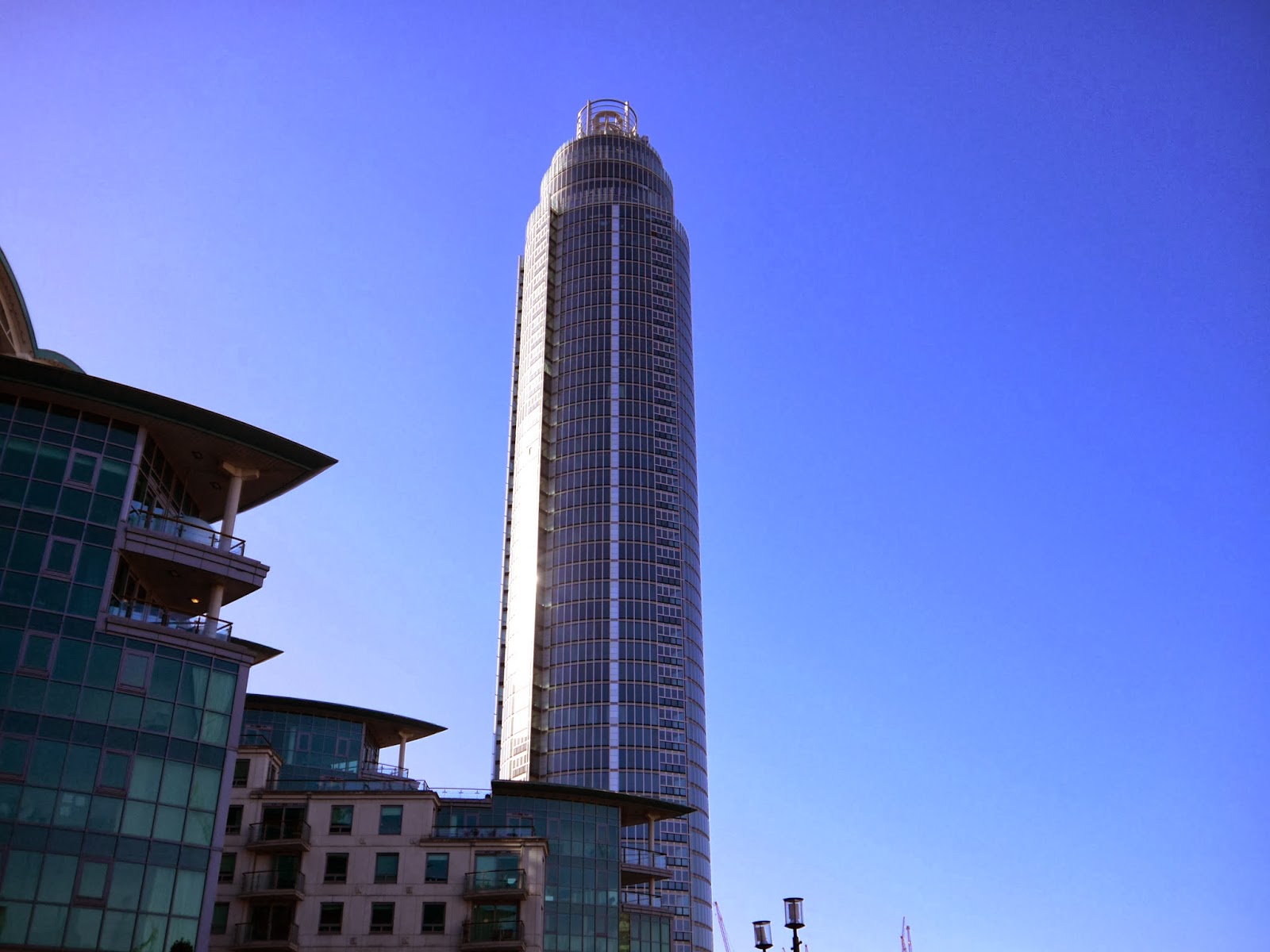 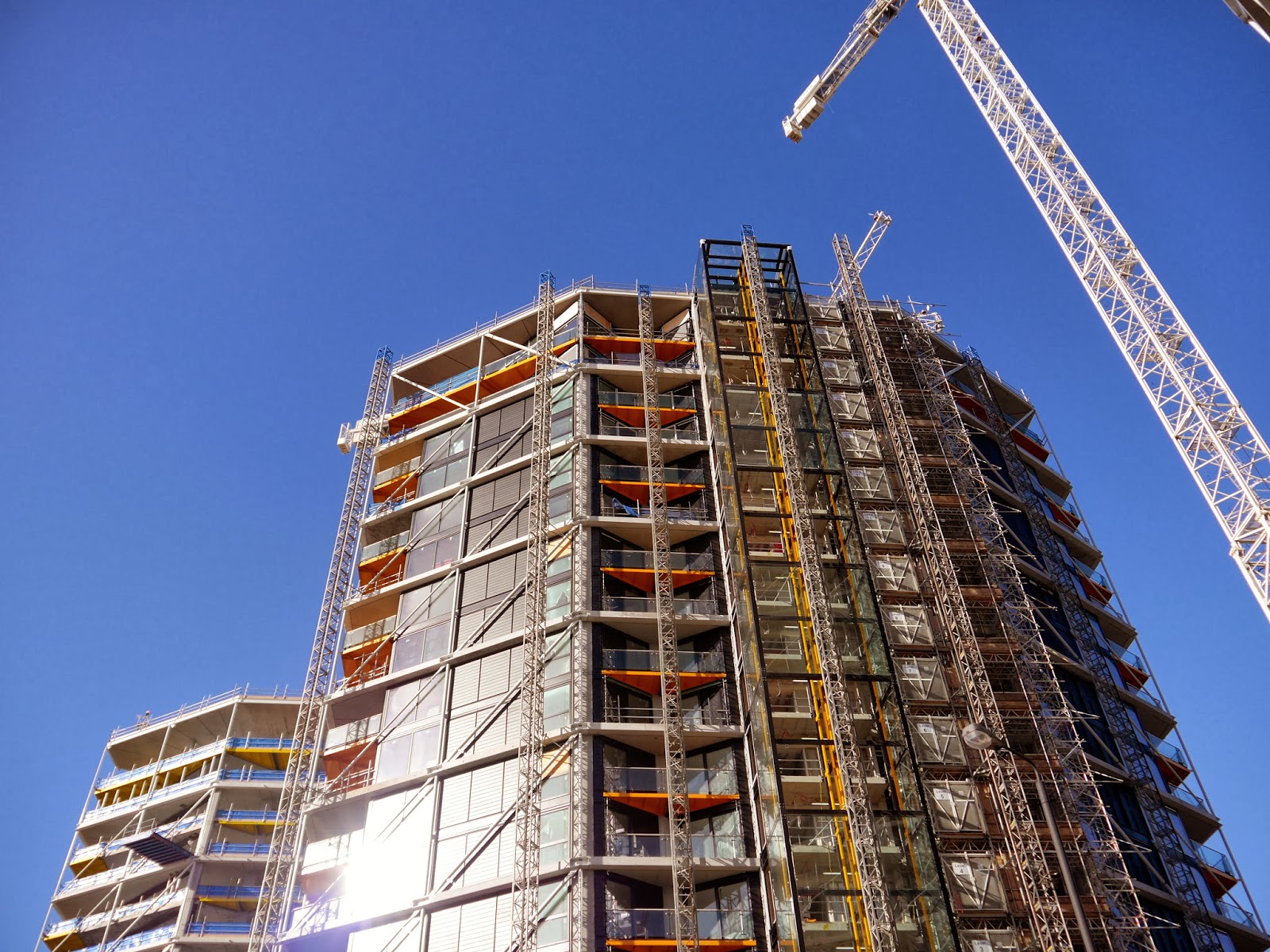 When we have gone on our many Thames rides the one thing that has struck me is the shear number of riverside developments that seem to be ongoing. On this part of the river Thames, this certainly is the case. The number of new buildings in the process of being constructed is high. Most sit well with those buildings that have been there for considerably longer. 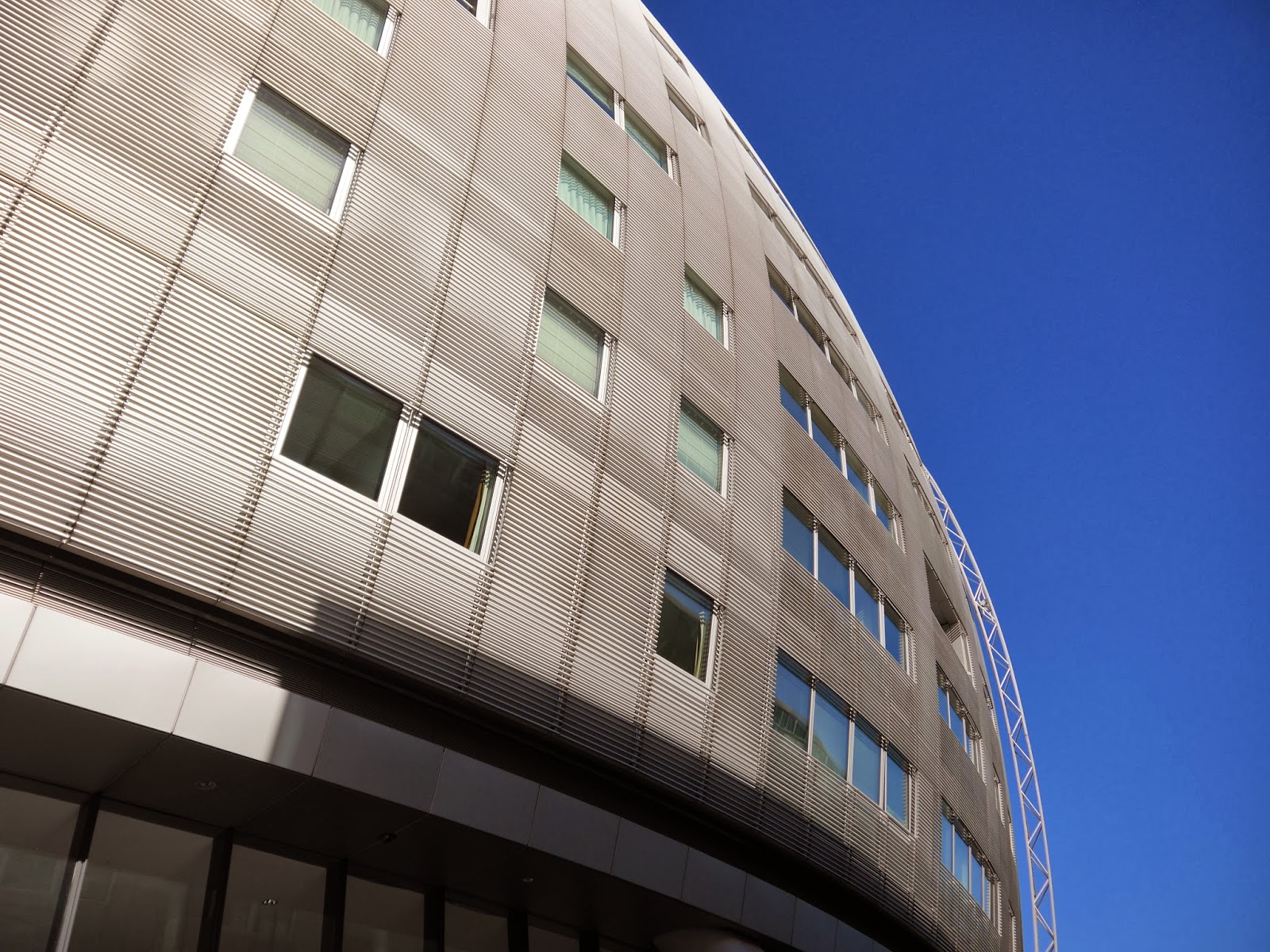 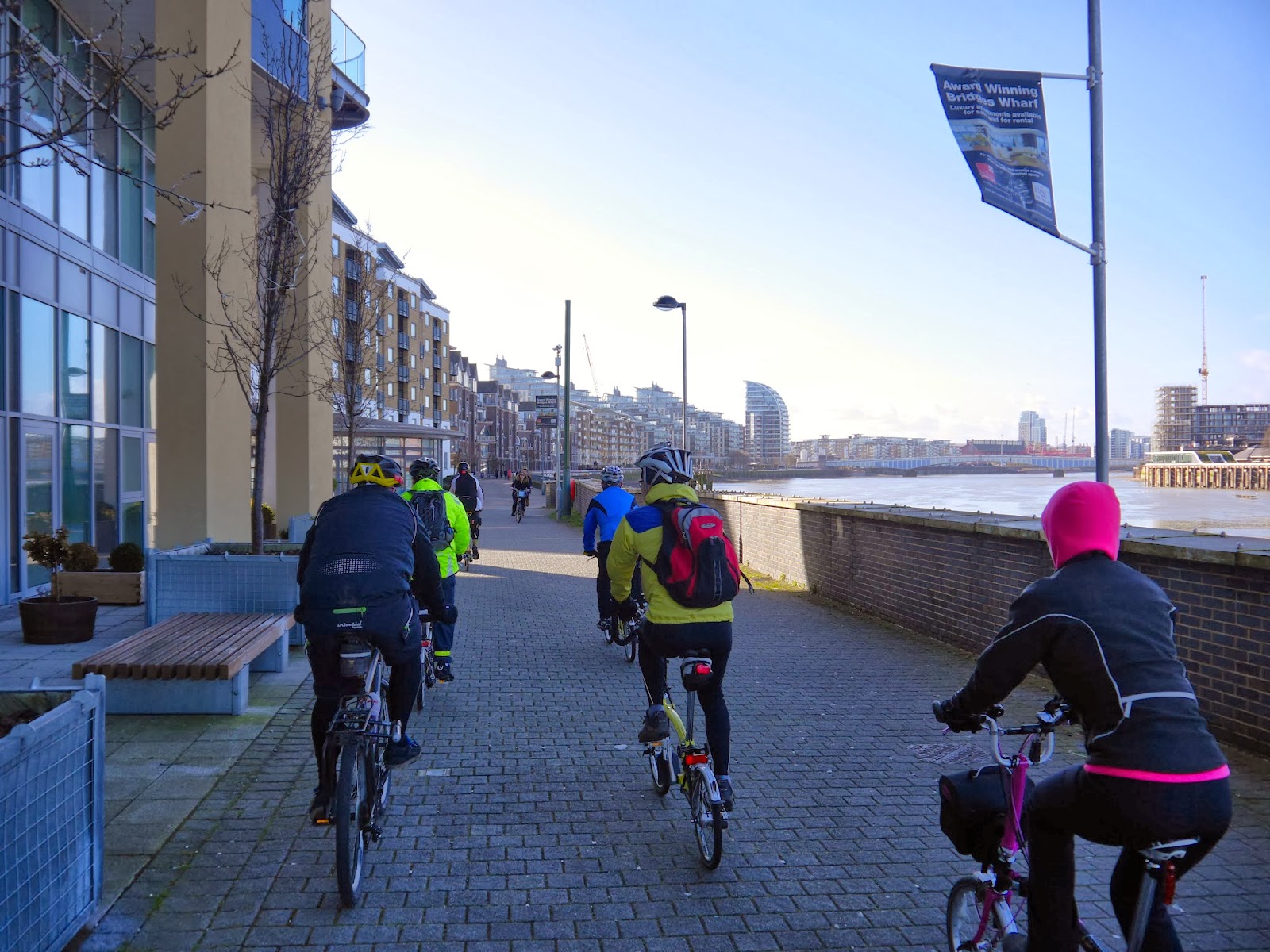 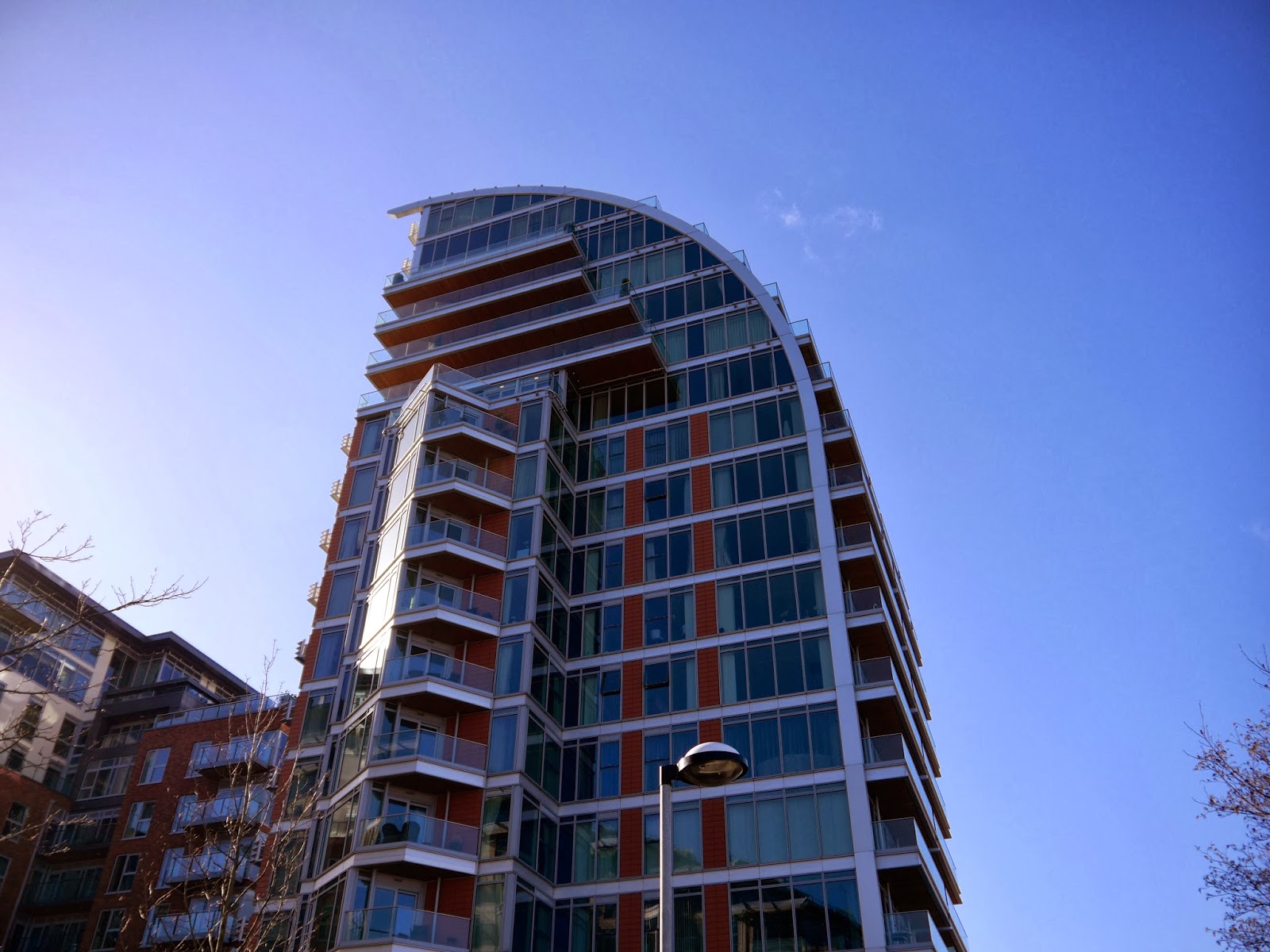 As we cycled further along, through parks etc.., we could see the result of the recent high winds. There were lots and lots of branches scattered around but in a few places trees had been blown over and lay in our way. 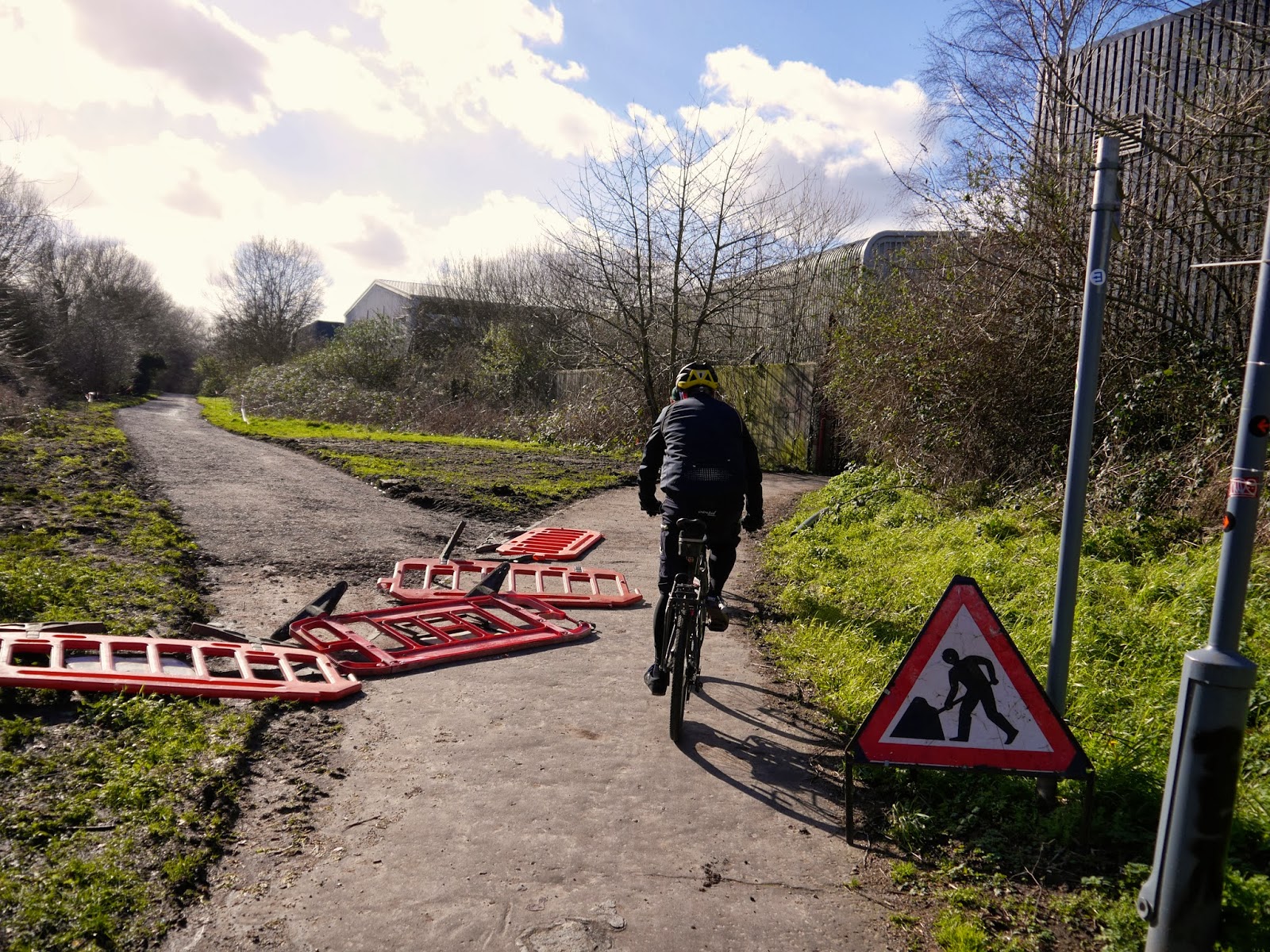 Eventually we reached Merton Abbey. This was the rest point for a previous adventure called the Wander Trail (click on the link below). It was also the location for a Brazilian restaurant where many of use partook in some lovely smoothies. 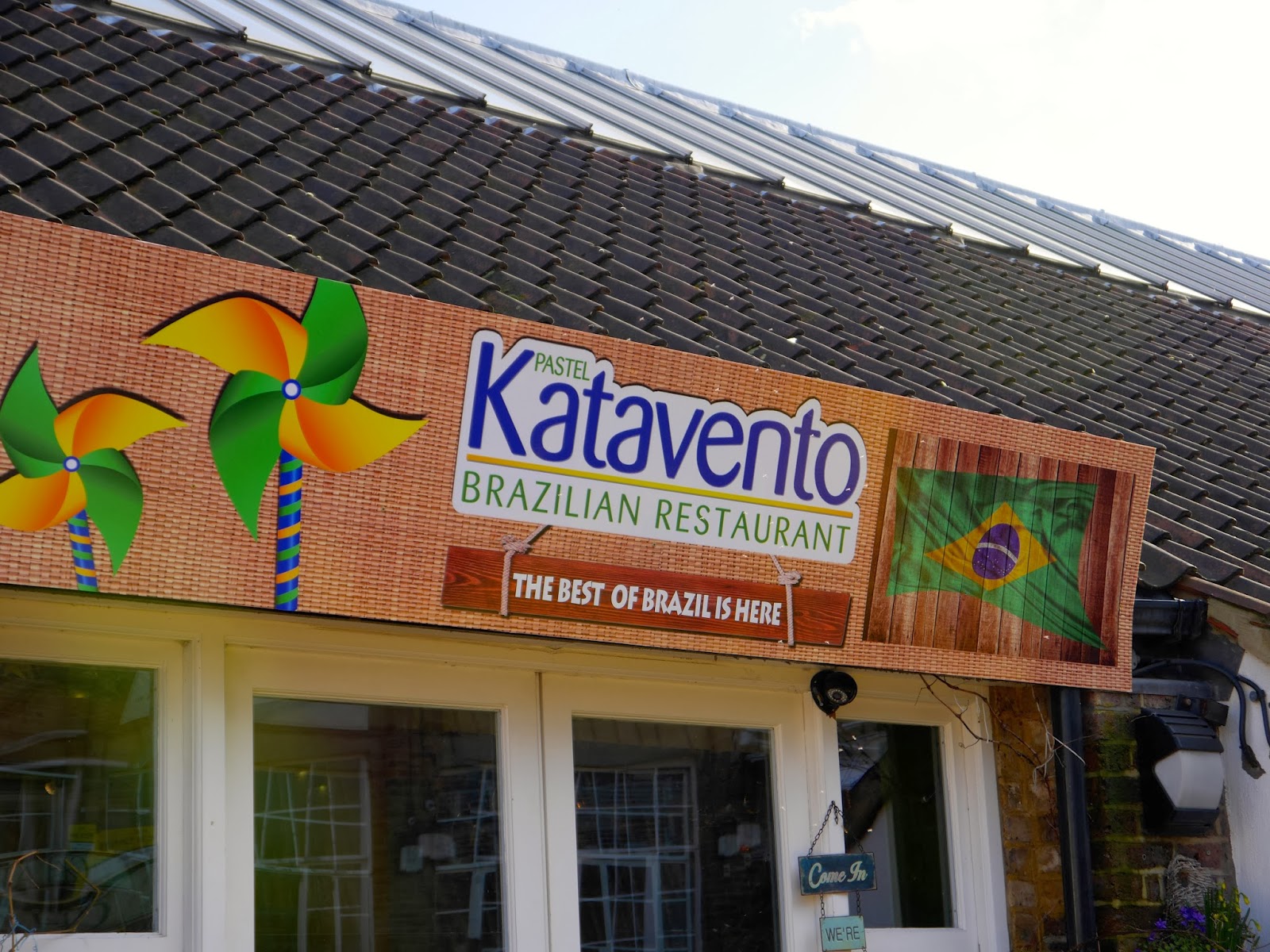 Feeling refreshed we pressed on. Much of our route was on designated cycle paths/routes and as such some of the paths we rode on were interesting to say the least. More on this later. 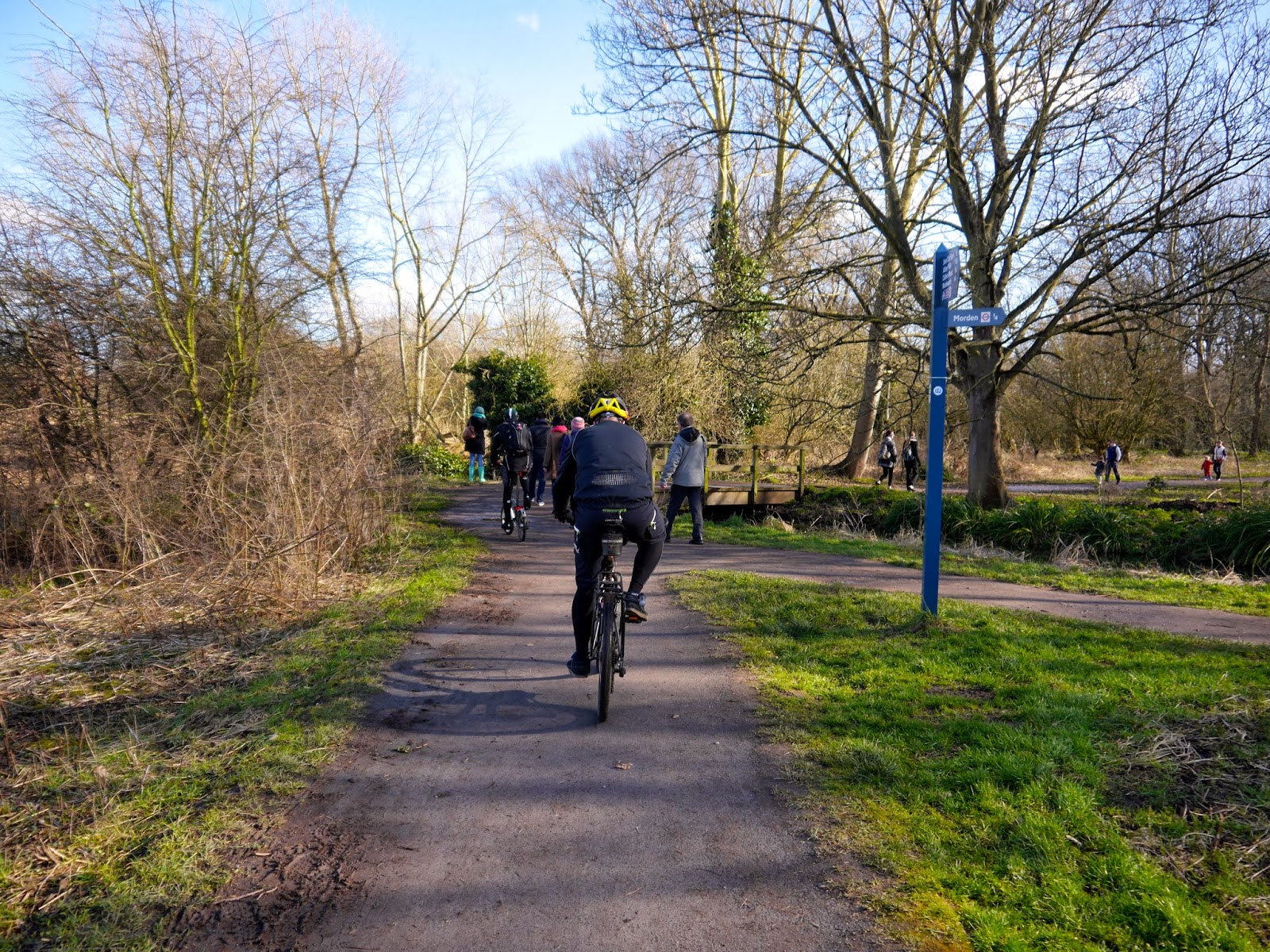 Our luncheon stop was at the Oaks Park Tea Rooms in Banstead. Here we had a quick snack and rest before heading off again. 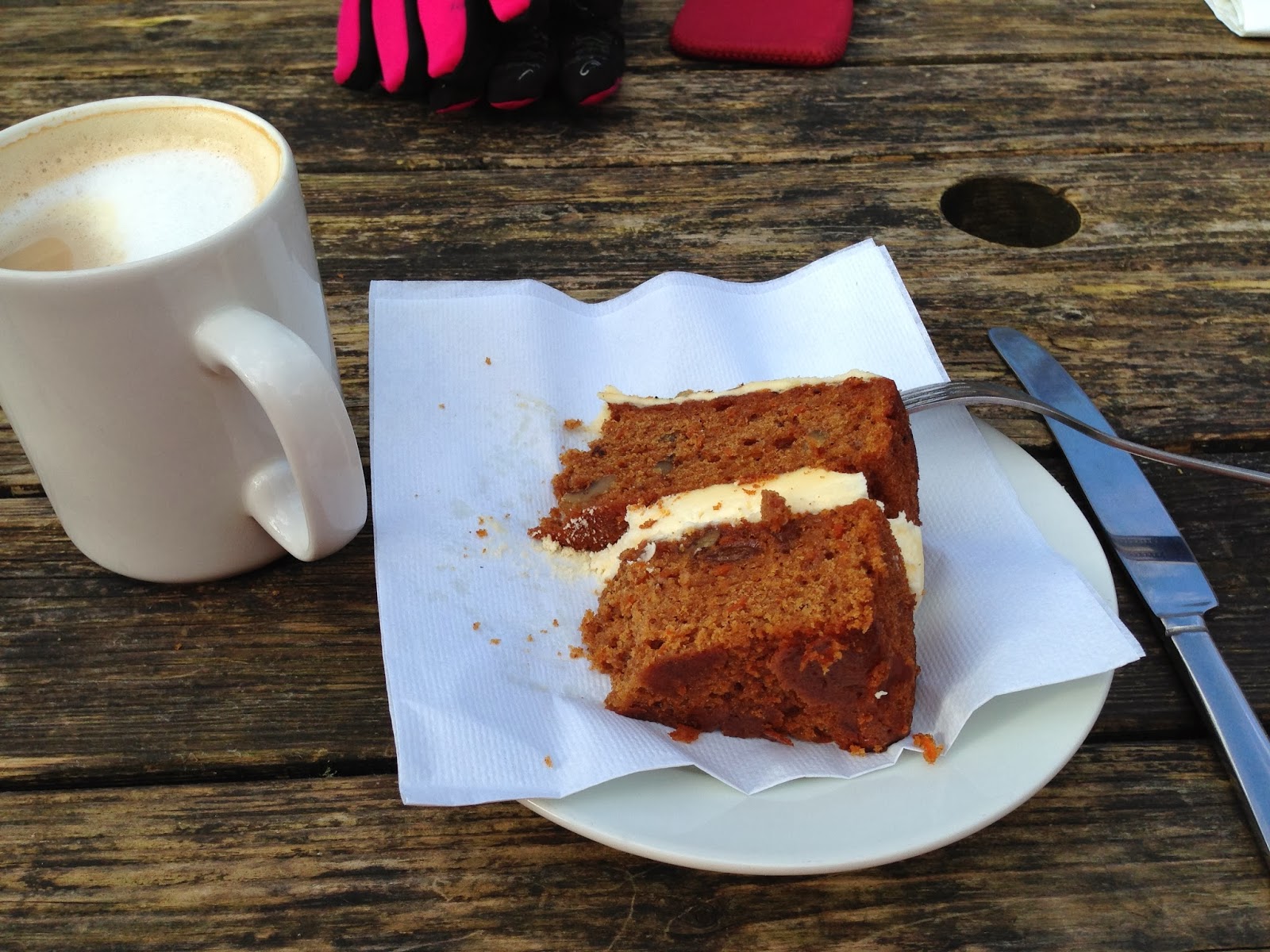 If a ride states that there will be hills, it is an instant draw to me. I love hills. There is a challenge about them and the sense of achievement of conquering them on a Brompton. Having gone on lots of rides that contain very big inclines over the last year, I have had the experience of having a go at many that are truly terrifying. There is a simple code to saying that you have beat a particular hill. Don't put your foot down and don't stop for a rest. If you have done either of these, then you cannot say you beat the hill. It has beaten you!

All of the hills encountered on this ride were a challenge but I have done a great deal worse. David - our ride leader - seems to be able to cope with just about anything and could be seen powering off into the distance.  At the top of the first big hill we waited for everyone to arrive before heading off again. 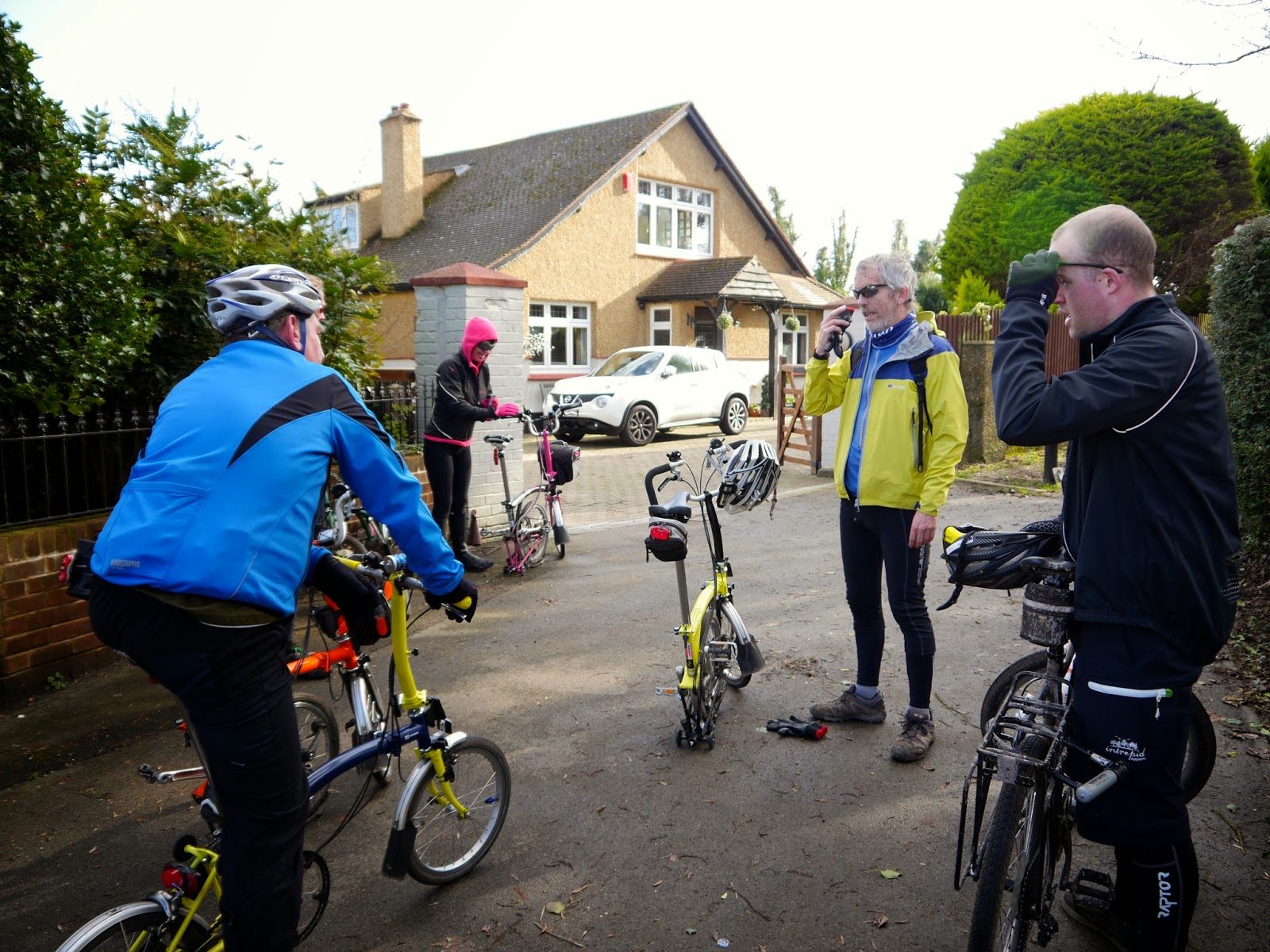 After the first hill there was a downhill section. Many went down at great speed but I favoured a more cautious approach, especially as the section of road was narrow.

The next several miles consisted of lots of hills and I was enjoying it greatly. The big one - Farthing Downs was not that far away and I was keen to have a go at it. I got a little more than I bargained for...

Farthing Downs went on for quite some time and was steep at certain points but not really that bad. Almost at the top I heard a very loud rear wheel explosion and I came to a dramatic halt. Upon inspection I could see a hole in the side wall of my Marathon Plus tyres. It was not good!

After seeing something similar to David on a night ride to Brighton, many of us purchased a tyre boot. This is a very strong patch that is used to make good a tear etc.., in the wall of a tyre. If you look closely at the ride data map you will see that on Farthing Downs I go off to one side. It was from here that I made good my tyre.

Using the Brompton Toolkit the wheel and tyre was soon off and back on. Even with the tyre boot in place the wall of the tyre bulged out. David's had looked worse and he was able to complete the Brighton ride so I was hopeful I'd make the rest of this one. I am just glad that I decided to buy the tyre boot and more importantly take it with me as part of my kit!

Using a CO2 cartridge I did not inflate the tyre to anywhere near its normal pressure - mainly as the tyre boot could be seen through the hole in the wall of the tyre. Setting off I knew that riding from this point would therefore require more effort.

After Farthing Downs there was a huge downhill section. I took this with great caution as I didn't want to suffer a blowout at well over 20 mph. After this I just tried to ignore it and get on with things. The only reminder was me having to pedal harder due to the under inflated tyre.


One section of path was unbelievable! It was muddy and potholed and these potholes were invariably filled with water. There were so many of them that on several occasions one had no option but to go through them. I feared a Laurel and Hardy moment where one of us would enter one of them only to be submerged fully!

The path resembled the Somme or some other battlefield where heavy artillery had blown up everything in its path. At the end and thankfully there was an end we discovered that it was in fact called "Lake Lane." How fitting!! 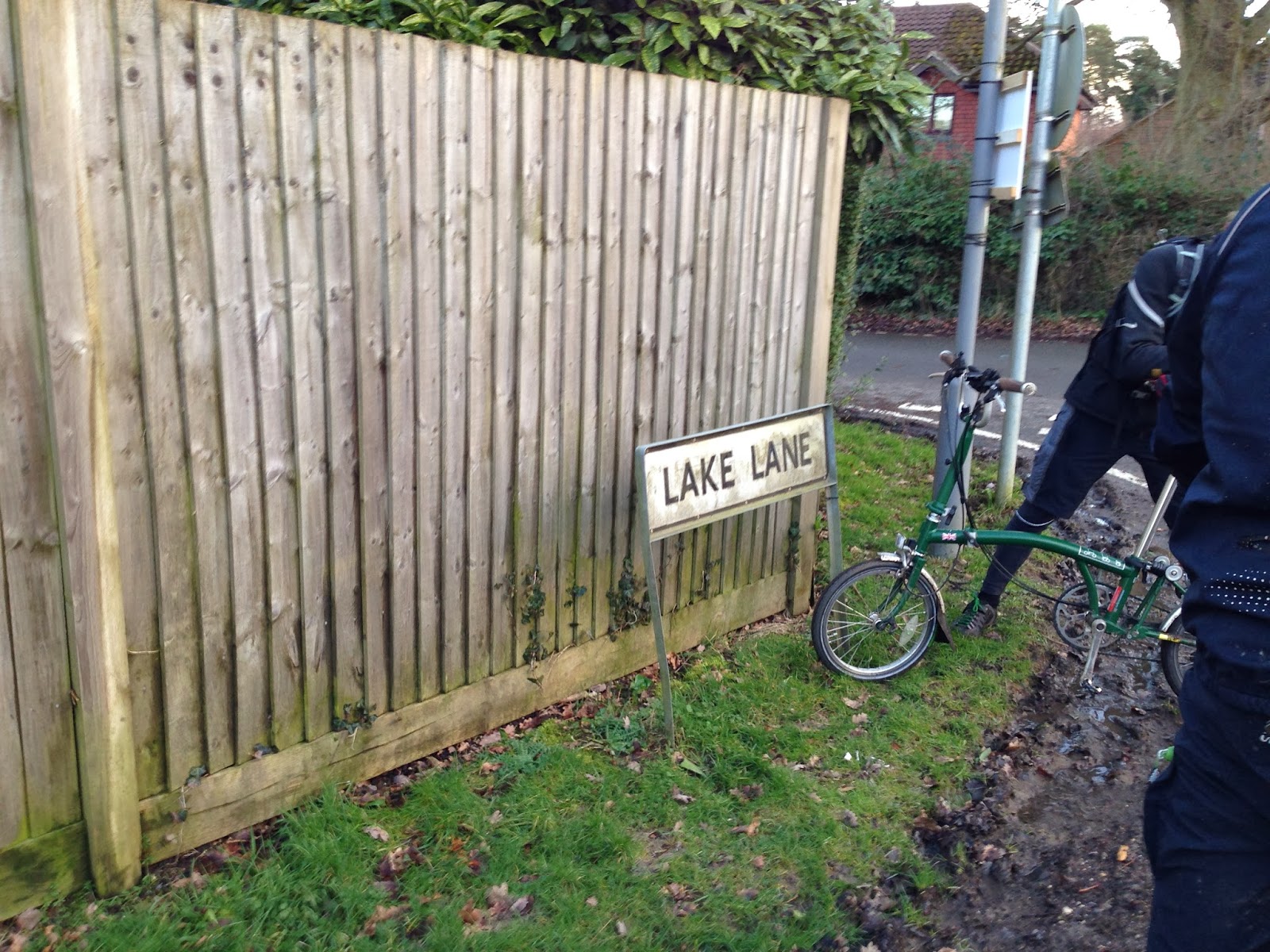 Again at a point on our route a tree blocked our progress and floodwater meant that we couldn't proceed anyway. David simply rerouted us until we were back on track. 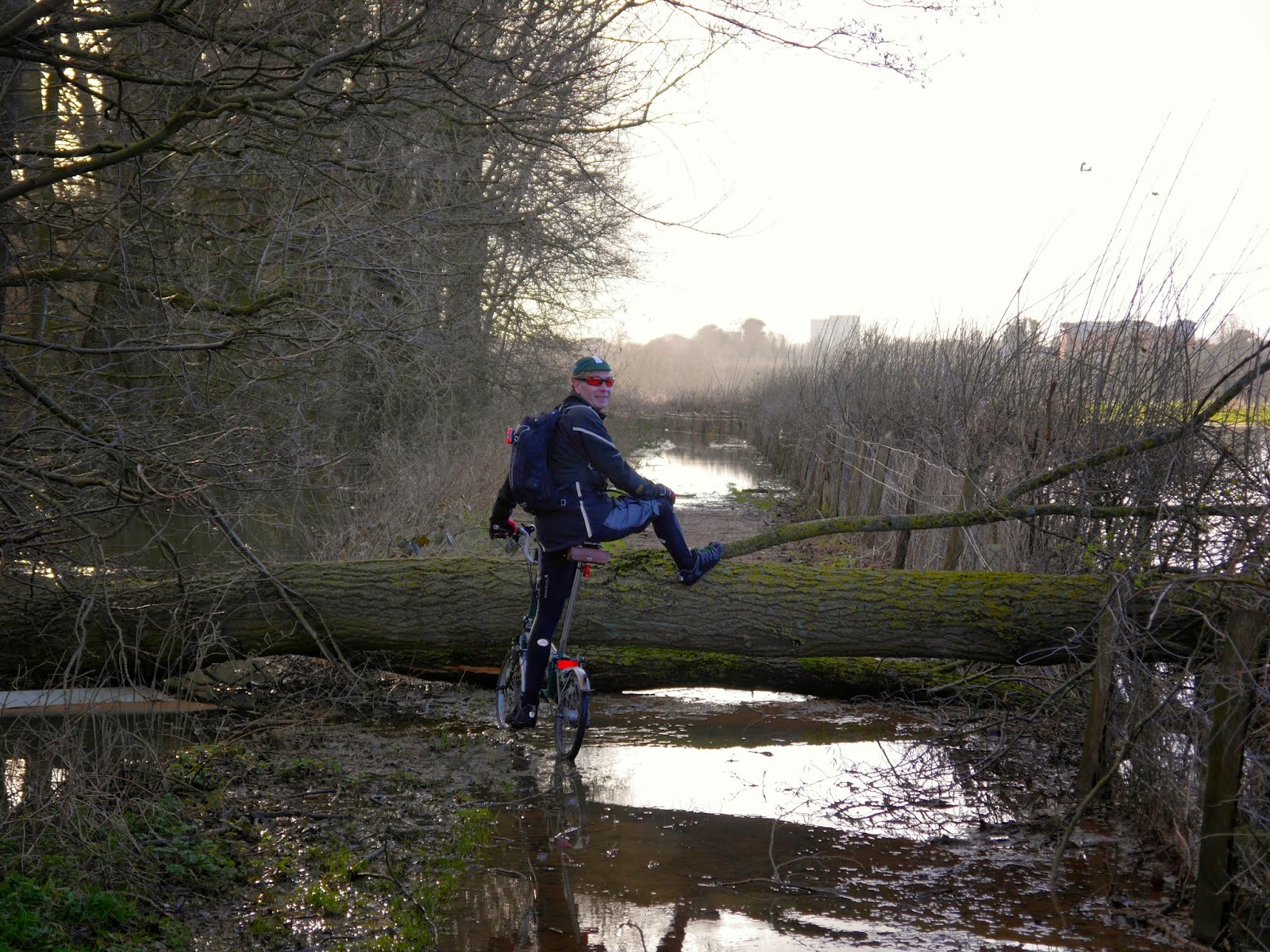 With a final push we headed towards Gatwick Airport. I had not been to Gatwick before and after seeing so many stunning buildings earlier on the ride it was a little underwhelming. Still, we had done it! 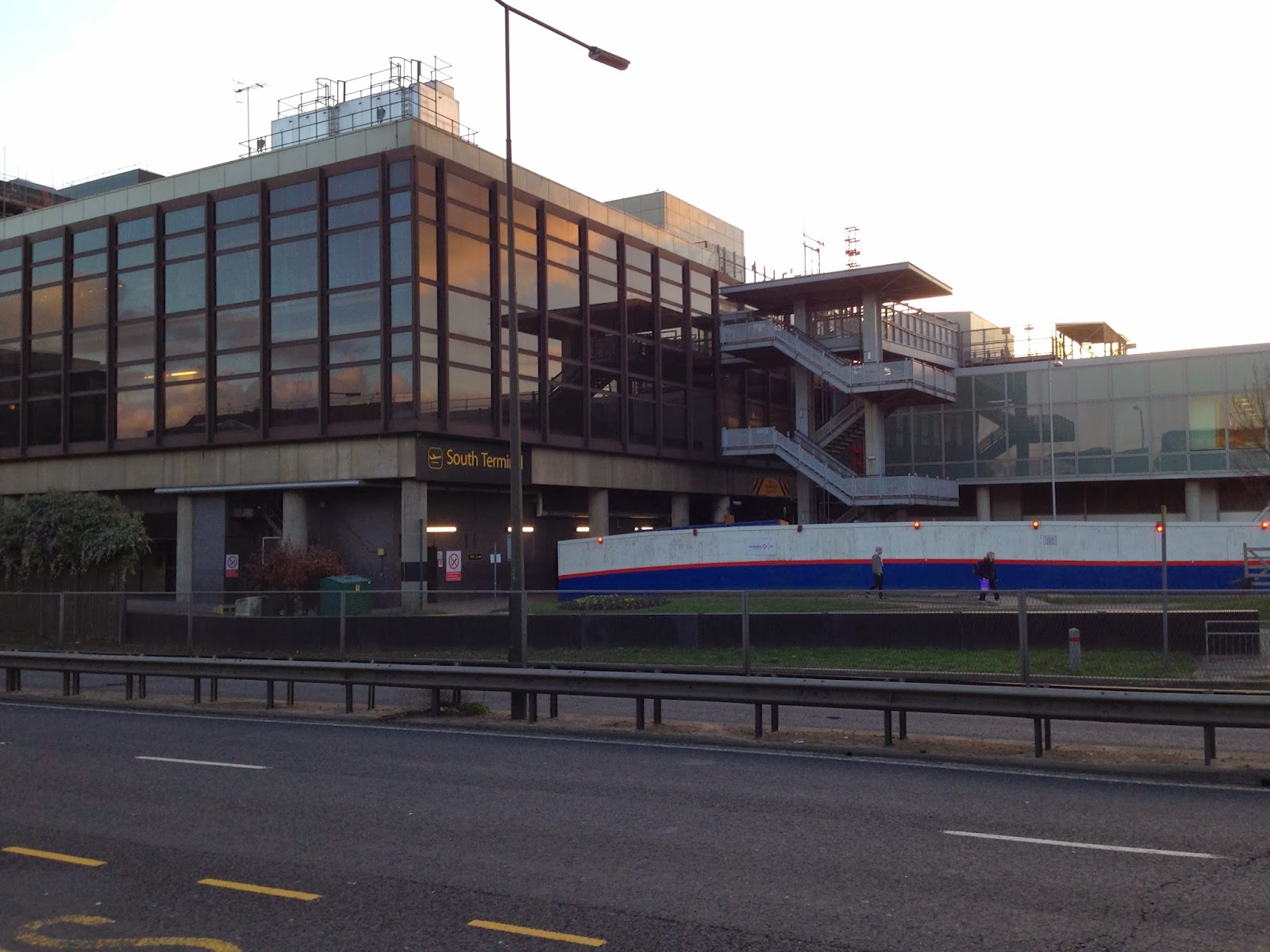 Boarding our various trains back to London, David, Anne, Andrew and I headed for Victoria. The journey took about 40 mins and upon reaching Victoria we went our separate ways. There was to be further drama for me before I got home.

In the middle of Hyde Park I suffered another tyre explosion. Using my Cree light I had the tyre off, applied another tyre boot and headed off. It lasted until the Edgware Road before going again. I decided to walk the last bit to where I had parked my car. It now provides the excuse I need to get rid of the Marathon Plus tyres. I have not been a fan and prefer the standard Marathons which as far as I am concerned are a much better prospect.

This was a great ride! It had adventure, challenge, scenery and excitement. I would like to think that it marks the start of some more regular rides after the drought (excuse the pun) after Christmas. Again, thanks to David for organising and leading another interesting ride and it was great to see old and new faces.

My poor Brompton is in a terrible state. A deflated rear wheel and mud everywhere. Over the next few days I will have it looking lovely again so that it is ready for its next adventure. These little bikes really can cope with almost anything and perhaps that it part of their charm.

If you liked the sound of this perhaps you could go out on your own adventure? You don't have to own a Brompton. Get out on your bike and explore you own area. I would love to hear from you and what you get up to.