The Urban Jungle with my Brompton and Ricoh GRD III

This morning I found myself out on my Brompton and could see Trellick Tower in the distance. For some unknown reason this building, which I have seen quite often in the distance on my compute seemed to have a draw on me and I cycled towards it.

Trellick Tower was the work of Erno Goldfinger. Some of his buildings still survive and are in the brutalist style. It certainly reminded me of something one might see in the dark days of the cold war somewhere in Eastern Europe. By all accounts he was an interesting character. Ian Fleming used his name for his villain in Goldfinger. 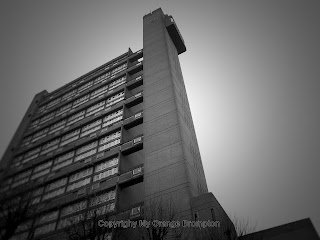 One of the strange things about photographing this building was that the locals going in and out of it regarded me with some amusement. It was almost as if they were wondering why someone would take a picture of this hideous building? I was not alone. There were a couple of others with camera shooting away. None of them had a form of transportation as beautiful as a Brompton Folding bike however.
The Brompton really is great for this type of photography. I hadn't really got a clue where I was going but pointed the bike in the general direction and managed to find it after a few T Junctions and blind alleys. I certainly would have been unable to find it as easily by car. The Brompton also makes for a rather good impromptu tripod and my Ricoh found the stability it needed on top of a Brooks saddle.
Having exhausted Trellick Tower I headed off and found a gasworks. I am really pleased at the way this little Ricoh manages to get crisp shots which such a small sensor. So far I love it! Being so small and light but still having loads of manual controls it is not only easier to carry than a DSLR, it is much more fun to use.
I am particularly proud of my pigeon in flight. I used a feature on the Ricoh called 'snap focus' to capture it very quickly. This feature allows you to pre-set a focal distance. When you then point the camera and press the shutter, it instantly focuses on this pre-set distance. As long as your subject (in this case a pigeon in flight) is roughly lying in that focal range, you will get your shot.
at February 12, 2012