Earlier in the week Mark (King of the Hill) muted an idea of a Christmas lights ride at some point in the future - something I was already planning for. Mid-week Mark suggested that Friday might be a good bet. It was still lockdown, things would be quiet, the weather wouldn't be too bad...so I said yes.

I parked my car in a posh part of Madia Vale, on the posh drive of a posh house of an old friend. A couple of gentlemen from a private security firm sitting in a small car parked on the road nearby viewed me with great suspicion until my friend and his wife greeted me enthusiastically from the doorway. Exchanging pleasantries from a distance I got myself ready and then headed off.

The meeting point was inside Charring Cross Station. The roads were quiet and inside the station it was all but deserted. Mark was there and we wasted little time in getting ourselves outside and off.

Our first port of call was the Tate Britain which has been decorated well and had attracted lots of other people who - like us - were taking photos. Despite there being lots of people on bicycles, it was only Mark and I who took a photo of our bikes with the building in the background. I suppose it is a Brompton thing.
Riding across Vauxhall Bridge I wondered what the security services would have made of us riding across on two brightly coloured Brompton bicycles? I always think that James Bond is missing a trick there. Imagine a Brompton Q Edition! 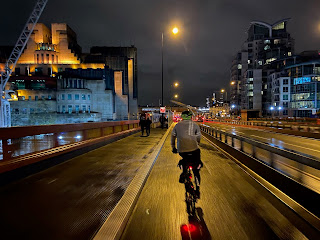 Heading towards London Bridge we followed the classic route that our ride leader of old David devised back in 2015! 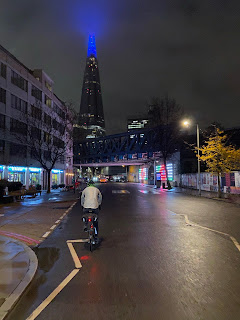 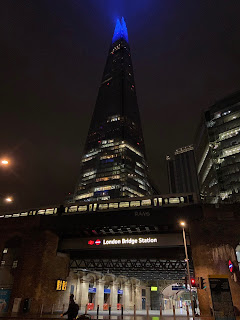 The rainfall earlier and the slight drizzle made for lovely reflections and I was rather pleased that my iPhone 11 was able to take pretty good photos in dark conditions. 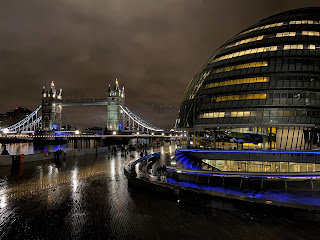 Once over Tower Bridge we started to follow the classic Thames Path route that is a particular favourite of mine and many other Brompton rider here in London. 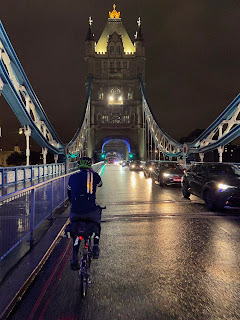 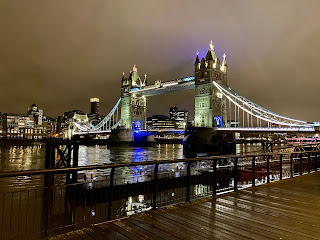 As always, the Canary Wharf skyline at night is always a lovely sight and makes for wonderful photos (backdrops for ones Brompton)! 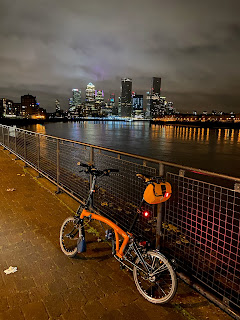 The skyline is every changing and new buildings seem to rise frequently altering the view you are familiar with. 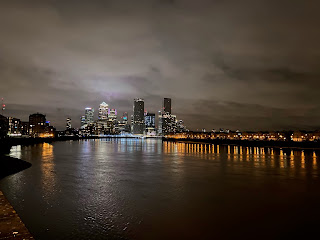 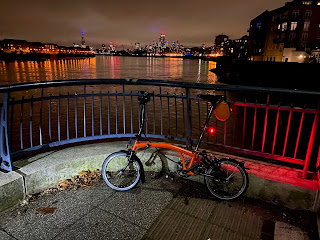 As we cycled through Canary Wharf, memories of the 'Winter Lights' ride came into view. This was one of the last group rides of 2020 where a sizeable amount of London Brompton riders came out in force for a sociable ride together. 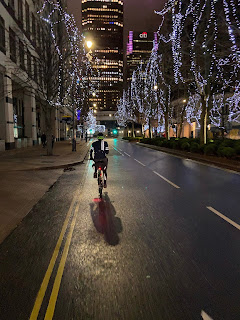 Some of the lights from the 'Winter Lights' lingered and the tree and light benches were a welcome sight. Naturally, I was drawn to the only one that glowed a certain colour, taking several photos. 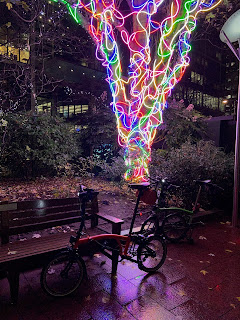 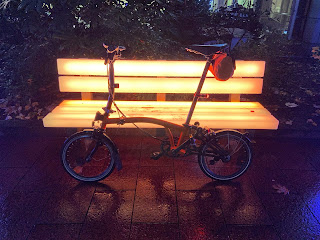 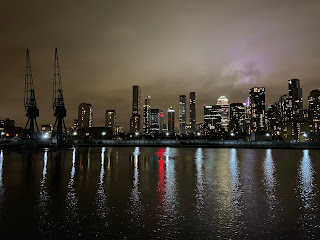 Having cycled along the Thames we went under it too by ascending to the Greenwich foot tunnel. We had the tunnel pretty much to ourselves and it provided another wonderful photo opportunity. 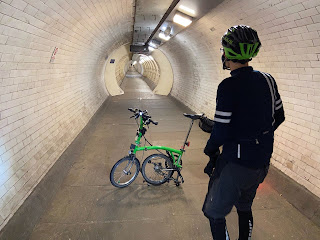 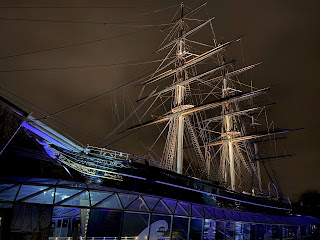 The Cutty Sark looked wonderful and with more photos taken we headed back into central London on the south side of the river. 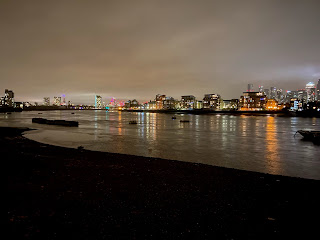 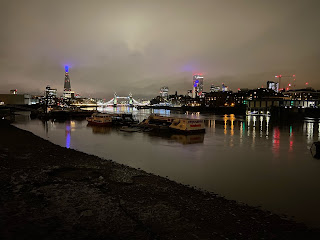 Reaching the Millennium Footbridge we crossed over to see that St Paul's Cathedral was not lit up. As went over the Thames London yet again looked quite resplendent. It was very quiet and normally there would have been lots of people on both sides of the river and on the footbridge. Apart from us there could not have been more than 2 - 3 others. 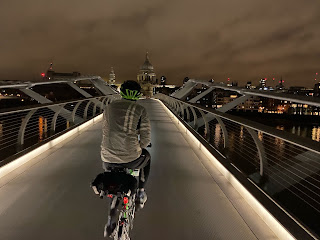 We paid a visit to both Kings Cross and St. Pancreas stations for a tea/coffee but not unsurprisingly nothing was open. We had both brought a snack, so we sat down and had that before setting off again.
Cycling down Oxford Street it felt like 03:00 on a Wednesday morning rather than almost midnight on a Friday night. There was hardly anyone about. There were groups of people on hire bicycles and I suspect they were taking advantage of the quiet roads to do pretty much what Mark and I were doing. 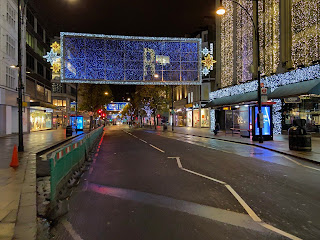 The blue arches were back on South Molton Street which I was happy about. As we reached Bond Street it sounded as if there was something rubbing on one of my wheels. Not seeing anything I carried on. When we reached Cavendish Square I discovered that I had a rear wheel puncture no less. The location was rather ironic. More on that further on.
With Mark holding the bike I had the wheel off and eventually managed to get the tyre off and inner tube out. Closer inspection revealed a whacking great shard of glass that has gone right through the tyre. Using a tyre boot (that was so old it wasn't really that sticky any more) I put it in place and got to the business of putting a new inner tube in and the tyre back on. Eventually I did it but found doing this 'in the field' much more demanding than in the comfort of ones home.
This was only my second Brompton puncture in ten years so pretty good going. The location. Cavendish Square was the location that I used to chain to the railings my mountain bike and later Brompton when I was at university. 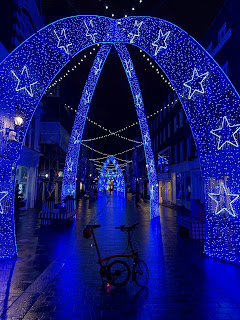 With the ride all but done I decided that my fairly godmother had spoken and that I should have set off for home before midnight. For me Carnaby Street was my last location. Mark continued to Covent Garden before cycling home. 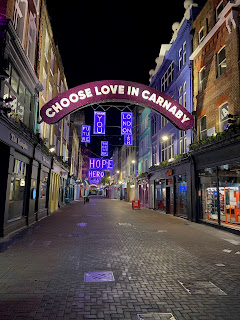 It was lovely to catch up with Mark and this was a great way to end a busy week. We caught up on all the gossip and as always had fun riding together. Hopefully we will be able to do something similar - perhaps an all nighter - in December and with a few more riders. But thanks to Mark for the idea and the invite.
Stay safe out there people!! 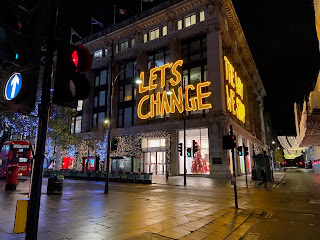