London to Brighton Overnight on my Surly Disc Trucker

If you have read any of my blog post about night rides to the coast you will already know that I am more than a little fond of them. The offering on Friday 8th June was back to where my night rides truly started - London to Brighton. Click here to read my entry from 2013.

The week was dominated by thoughts of this ride and it would be my first opportunity to give my new Surly Disc Trucker a really good run. As the day approached I started to look forward to it more and more. In fact the 'London Nocturne' folding bike race - which I have participated in for the past 6 years - was also on that weekend but if I went to this I could not go to the London to Brighton overnighter as I would be too tired. It was a very easy decision for me. I mean 25-30 minutes racing on my Brompton just cannot compete with 8+ hours riding through the night.

I was itching to take my Surly out! The Surly Disc Trucker is not a lightweight in any way. It is built like an Abrams tank and as tough. I could have taken a small saddle bag but decided I would take one  Ortlieb City pannier bag. In this I packed:

I certainly wasn't packing light and consequently my bike was quite heavy - just the way I want it. This may seem a rather unwise thing to do - especially as we had been advised to pack only the essentials - but the way I saw it the Surly is a touring bicycle and I wanted to see how it would perform for light touring - assuming you can call this ride, light touring?

I set off for the short ride to the tube station in the knowledge that both Geoff and Dr John would not be in attendance. Thankfully Mark (King of the hill) was though. I arrived at the meeting point on the South Bank in good time. With Mark arriving shortly after we were soon listening to the interactive instructions from ride leader Adrian. After being told to carry out some last minute checks of our tyre and just after midnight we were off. 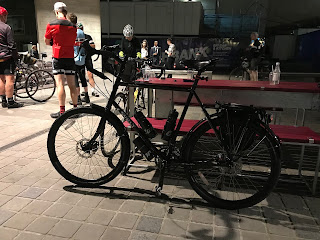 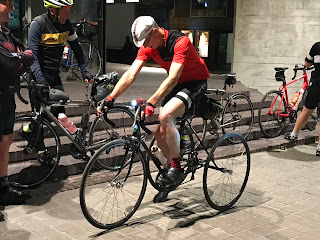 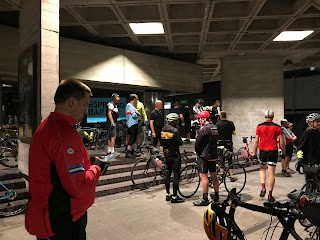 I found the Surly very comfortable and it was if I had owned it for many years. The bar end shifters again proved to be more than capable and I enjoyed using them. The right shifter gave a satisfying click when moving the chain up and down the cogs and the friction shifter for moving the chain to one of the 3 x chainrings was quick and easy. 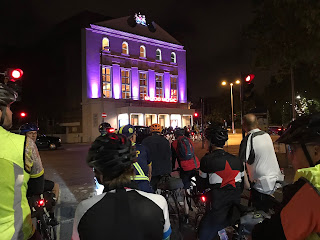 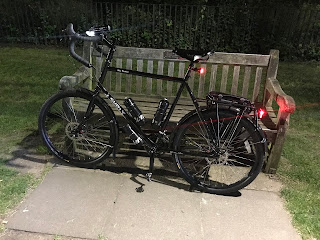 It wasn't too long before the last remains of urban finally gave way to a more rural scene. The weather conditions were near perfect. It was Goldilocks weather in many ways. I simply wore a merino base layer and a light jogging top. 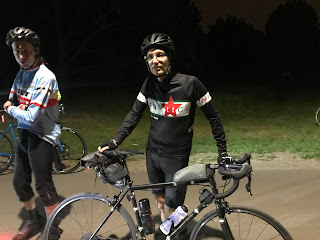 A combination of the 1.75 inch tyres, the excellent disc brakes and the fact I felt confident that the Surly would cope with just about any road surface, resulted in me travelling a great deal faster down some of the lengthy descents we encountered. I get I was still being rather cautious but unintentionally clocked up almost 40mph down one of them. For someone who believes in taking it easy down hills, this was quite a shock. 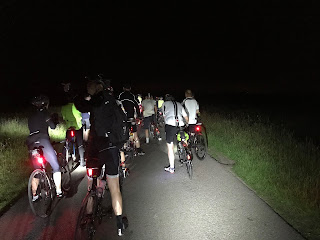 I have to say that I was really enjoying the ride, chatting with Mark and the many other participants and cruising along on the Surly to the extent that our arrival at the halfway stop at the Burstow Scout Hut came as a surprise.

For £5 the mug of tea, sandwich, and cake was a bargain and very welcome. Conversation was rather muted for many - including me - as tiredness crept up slowly in the warmth of the Scout Hut. 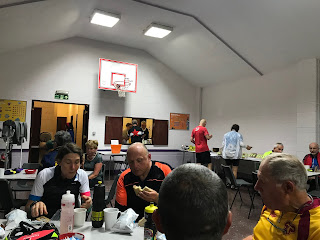 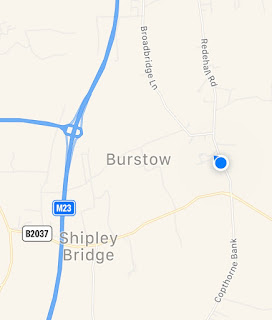 Coming out into the early morning dawn I didn't feel too cold at all and only get the need to put on a neck buff - which incidentally came off about 10 minutes later. 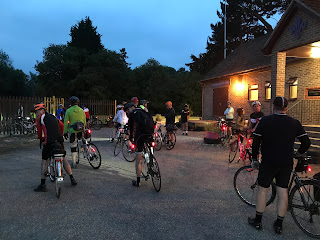 When we emerged from the Scout Hut we were about 30 minutes away from the first of the climbs, namely Turners Hill. I ascended this quite comfortably and had not needed to employ the smallest chainring. 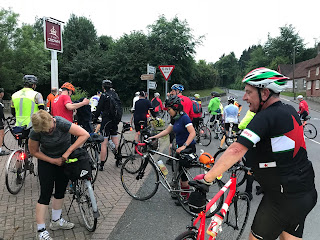 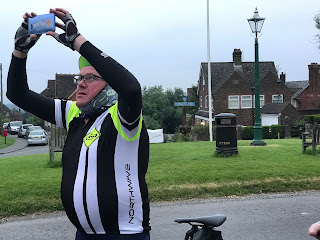 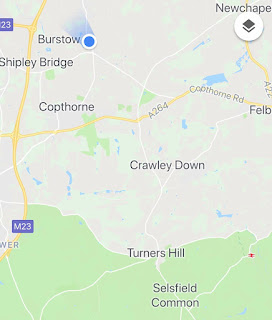 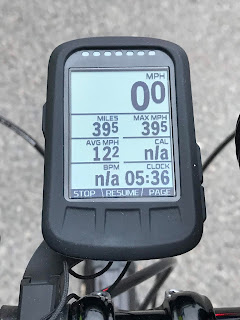 With Turners Hill done the next was the famous Ditchling Beacon. We were making such good time that Adrian our ride leader decided to mosey and have a sit down so we could kill a little time. Sadly, the discovery of a broken spoke meant that he could not valiantly lead us over the Beacon. Adam - ride leader for many another night rides to the coast - stepped in and took up the lead for the remainder of the ride.

As we neared the Beacon, signs pointed in its general direction and the anticipation of being able to tackle this formidable climb grew. 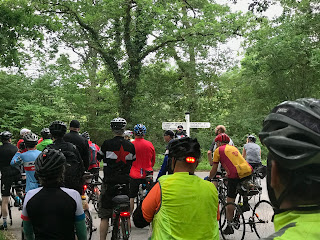 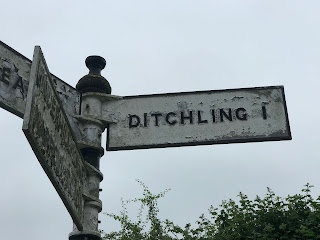 Mark was off into the distance when we reached the car park at the base of the Beacon. I readied myself and made my ascent. I took a steady pace and at last found a use for the third chainring. I had been looking forward to using it and I now had my chance. I had a couple of cogs on the cassette left as I eventually neared the top of the beacon.  I had done it. The surly had done me proud and I liked it even more for it. 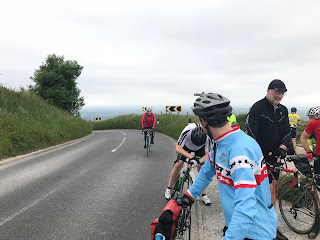 Naturally, I had to take a few photos at the top of the Beacon. Despite having done this several times in the past, I still enjoy it and yes the false summits did nearly catch me out again. 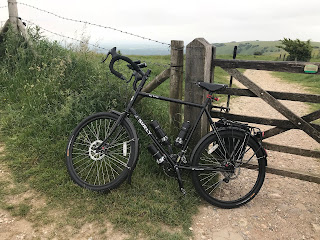 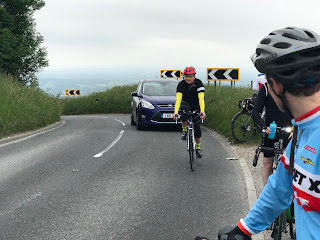 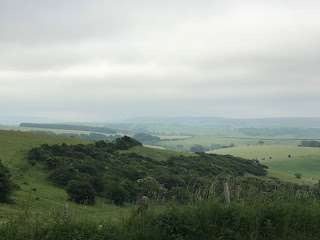 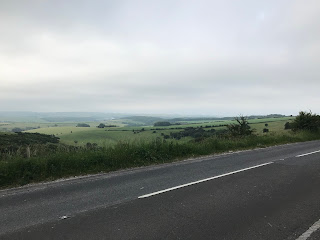 Those of us who wanted to head into Brighton started to cycle the last few miles. At the seafront and in view of the famous Brighton Pier, I stopped for more photo opportunities. 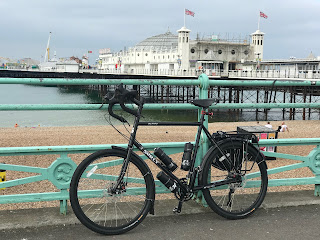 Wanting to get back to the big smoke, I decided to forgo breakfast and made my way to the Station. Getting on the next available train to Victoria with one other participant who had a similar idea, I made it back in very good time.

As much as I do not want to admit it, big wheels are a great deal easier for this type of distance than those on my Brompton. As for my Surly Disc Trucker, I get how it has such a cult following. I loved using it on this adventure! 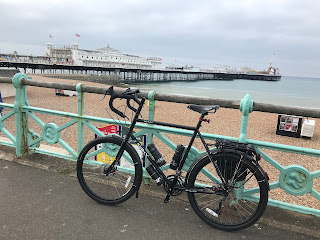 I love these nocturnal rides! Many of my family and friends just don't get it and cannot understand or appreciate the appeal. They are truly addictive and I am always looking to see when the next one is. Sadly, this won't be until middle of August! Far too long!! 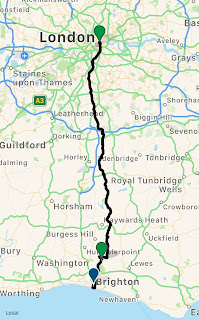