There are occasions when I have good ideas. One of these was suggesting a night ride to the coast on Maundy Thursday from London to arrive in Brighton on Good Friday. The idea was pretty much just that unless I could find a suitable soul to do the navigating. Thankfully, the ever wonderful David stepped in and kindly agreed.

Now I did attempt this very ride earlier in the year on my Brompton and managed to get to Brighton. I would not however inflict my navigation on anyone. Things were either painfully slow or possibly too fast and quite stupidly I cycled to a Scouts Hut in Burstow for no reason other than it was on the route I had stored in my Garmin. If I get round to it I will write a blog post on this...it might make entertaining reading!

The meet point was Hyde Park Corner. I wanted to keep it as that as it seemed quite fitting. As I arrived I spotted Dr John and not too long after that the various participants arrived. Along wth David there were the familiar faces of Steve, James, Ian and the ever stylish Zoom Zoom and Tony. The ride had attracted some new faces too and it was lovely to see others being corrupted into a night ride to the coast. 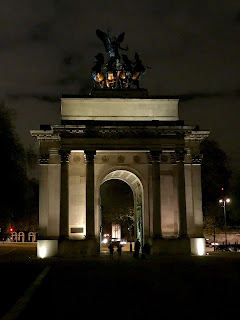 Despite it being a Brompton ride, I took my Condor road bike. This was more out of necessity as my trusty P-type was having some spoke replaced - after I had probably made things a great deal worse!

A midnight we set off on a familiar route that was a tried and tested classic, part of which has been used on Friday night rides to the coast for many a year. 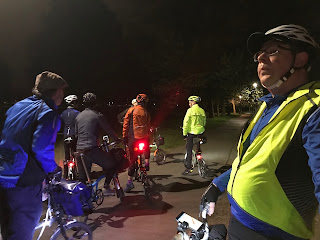 I tried hard not to miss my Brompton too much but enjoyed using the Condor a great deal. Although at certain times I could go much faster than my small wheeled colleagues - more that a road bike is inevitably faster than a Brompton, as apposed to me being a faster rider - I stayed back. 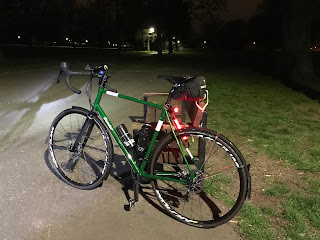 The ride was at a good pace - David was leading it after all - but every so often we stopped for a rest or for the tail to catch up. At these opportunities I tried to take some photos however doing so at night is challenging. 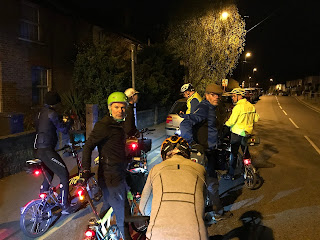 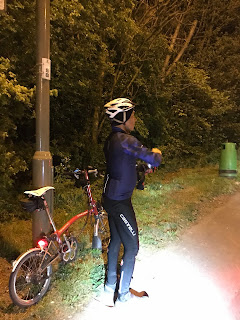 The route saw us cycling up the legendary 'Lonesome Lane' and my thoughts turned to my very first night ride to the coast where I saw this for the first time.

Not too far from the halfway stop, Vanessa sadly decided that the pace was not for her and made the brave decision not to continue. Tony waited with her until her sister drove to her location and collected her. We made our way to Gatwick, with Tony going to meet us there. 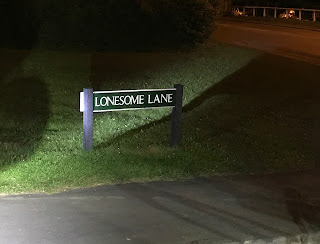 Making very good time we arrived at the halfway stop at Gatwick Airport and discovered that Tony was already there having got a lift from Vanessa's sister. 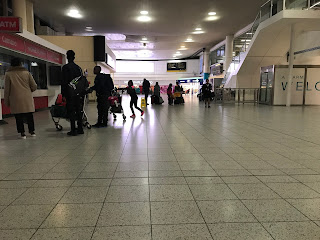 We all got some refreshments and took a few moments to rest while our bicycles stood lined up eager to get going again. 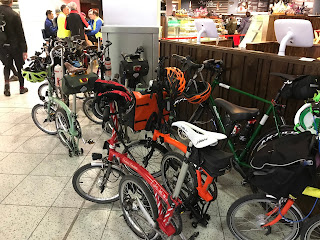 The toilets at Gatwick again proved to be the best halfway toilets ever for a ride of this nature. They were being cleaned by a very tall and tough looking gentleman, whose toughness was diminished slightly by the fact he was wearing heavy mascara and false eyelashes. 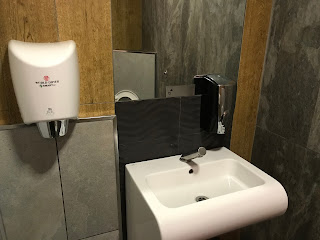 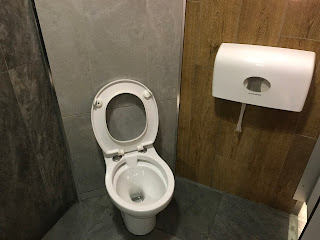 Testing out the 'depth effect' on my iPhone, poor James, David, Dr John and Zoom Zoom all had to humour me when I took a few photos. 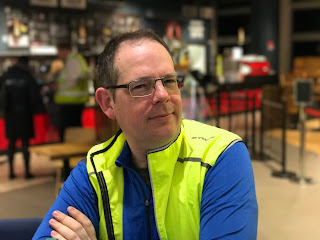 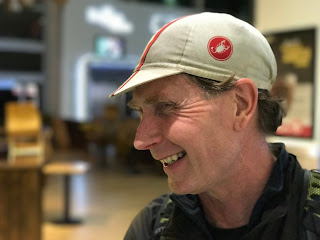 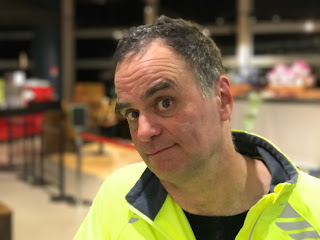 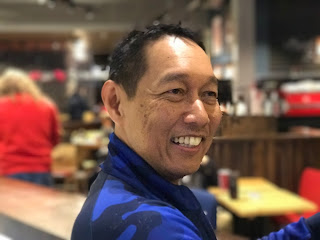 Back outside after our rest, it was chilly but not as bad as the recent Whitstable ride, After a few minutes I was back to a comfortable temperature. 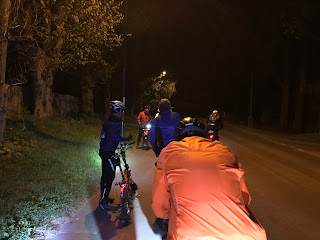 Pressing on, dawn crept up on us slowly and before realising it was light. Birds sang from every hedgerow and as I cycled by I attempted to put the birdsong to the bird. 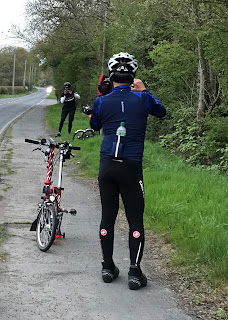 Soon we approached Ditchling Beacon. Preparing for this in our own way we made our own ascent of this infamous climb. 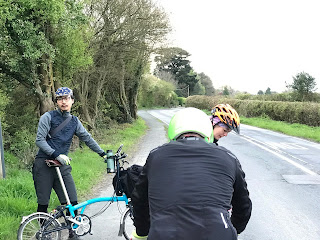 I was rather keen to see how the road bike would perform and I was not disappointed. Things were defiantly easier and when I dared to cycle out of the saddle this was easier than doing the same on any of my Brompton bicycles. Eventually I reached the summit - after several false ones - and was happy that I had again beaten the Beacon. 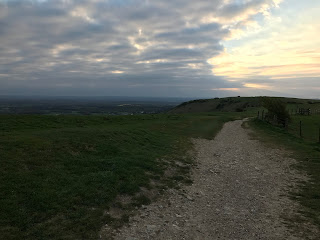 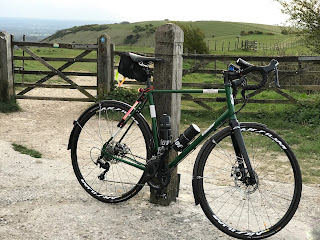 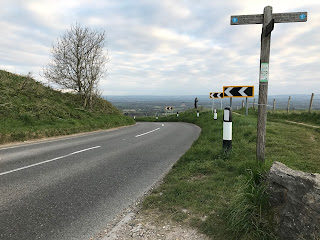 We didn't have long to wait for the rest of the riders to join us at the top and one by one they powered their way to some pretty commanding views. 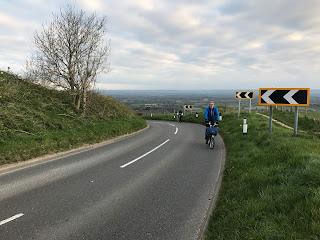 As if by magic the sun started to creep through the cloud and the landscape was illuminated making the scene in front of us quite stunning. 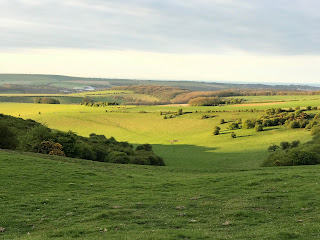 What then followed was the obligatory photographs of the group, individual bikes and the views. 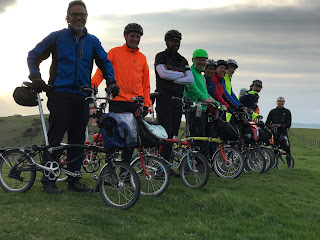 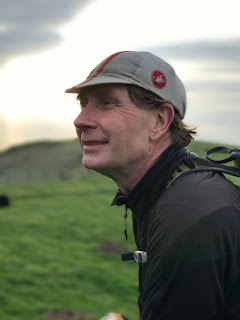 With the ride all but completed all that was left was the ride down into Brighton. This was quick and as it was still quite early and a Bank Holiday, fairly traffic free.

Arriving at the seafront early at about 07:40 I could not resist the temptation of forgoing notions of breakfast and getting the next available train back to London. Looking at the train times I realised that if I wanted to do this I would have go immediately and pedal fast. Saying a very quick goodbye I headed to the station. I made it on the next train to Victoria and even managed to get a seat. 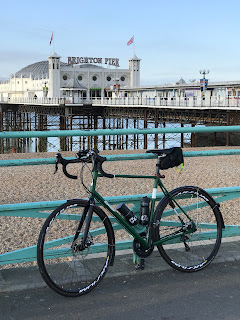 This was a great ride and many thanks to David - yet again - for leading us. Also thank you to all those who turned up - familiar faces and new. Sadly there is not another night ride to the coast until the beginning of June. That ride will be to Shoreham, not that far from Brighton and I look forward to that already. 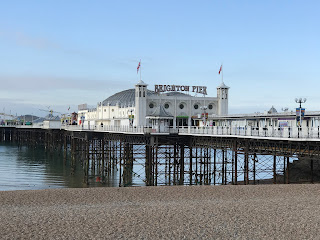