The Whitstable overnighter was a ride I have been looking forward to all week. With it also being quite busy in terms of having to do work stuff in the days leading up to it, Friday night came rather suddenly.

I decided that I wanted to take big wheels and rather than use the Overground, opted to use the Underground instead. Although a little more cramped, it all turned out well and things didn't get too busy. The strange thing was that people seemed to be as interested in my big wheels as they were for one of my Brompton bicycles.

Arriving with plenty of time to spare I ambled to the start location on quite a clear and mild night. Rain was not forecast so I only packed a lightweight waterproof jacket just in case or if I felt a chill in the early hours. More on that later! 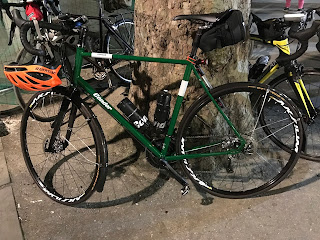 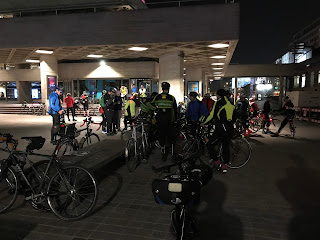 When I arrived at the start location there were already quite a few participants and saying hello to a few familiar faces I got myself signed in by Tim, our ride leader. Before long Simon arrived on his rather fine nickel special edition Brompton and not long after Geoff on his equally fine red Ribble road bike. After the customary interactive safety briefing we were told to get ready and at the stroke of midnight we were off. 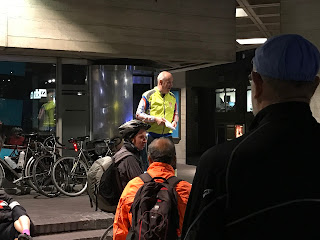 We made good progress and the new start location on the South Bank instead of Hyde Park Corner does seem to be better. Any pangs of nostalgia are easily satisfied as I pass through Hyde Park Corner   on my way. 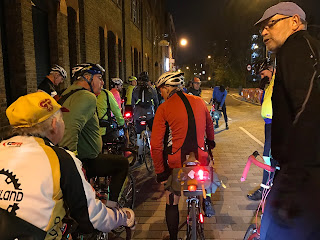 Soon we had arrived at Greenwich and the Cutty Sark looked quite charming lit up, viewing it through a sea of cyclists. 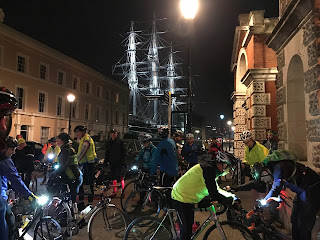 Progress was brisk and we passed Woolwich Arsenal and its copious new dwellings that I would imagine cost a small fortune. 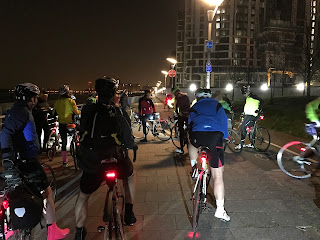 Every so often we stopped for the tail to catch up or for people to...ahem...powder their noses. I was once told by a great legal mind that as far as the City of London was concerned, you could not be arrested if you...powdered your nose within the City wall as long as you shouted out, 'pain, pain pain!' When I powdered my nose, it took a great deal of self control not to shout out this legal loophole, despite not being anywhere near the City of London limits! 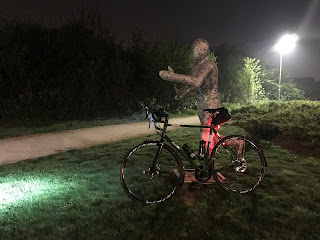 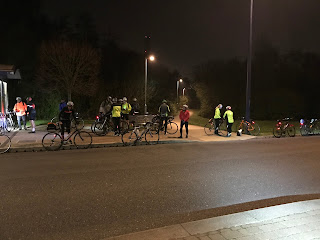 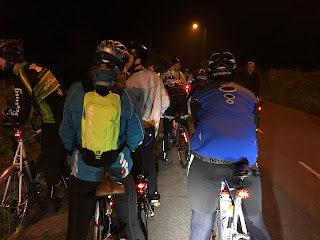 At a place called Lower Higham - at least I think it was there - we again stopped for the tail to catch up and a small pony in an adjacent field decided to saunter over. A few people started to talk to it asking if it were a good boy. Some started to take photos and there were even a few people taking selfies! 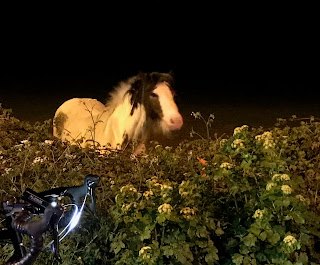 Out of the darkness it transpired that there were several of these ponies and not wishing to miss out on the fun, many trotted over to be made a fuss of at I think 02:30 in the a.m. 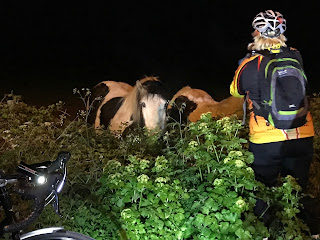 Not long after seeing the ponies, the weather turned. It started to get colder and a haze turned into to a mist. As we cycled on the mist turned into a light fog. Pressing on the light fog turned into an icy, thick fog that could have set the scene for a 'Hammer' horror film. It was quite apt that we were on our way to Whitstable where the late Peter Cushing used to live. With the fog swirling away all over the place and an almost full moon high in the sky, I half expected Peter Cushing racing out to pursue his old adversary Christopher Lee!


Sanctuary came in the form of 'The Church of the English Martyrs.' For the bargain price of £5 one could buy a couple of rolls, a slice of one of the best selection of cakes you can get anywhere and a hot drink. The funds go to a very worthy cause and the refreshments were made by a team of helpers who included Tim's wife. 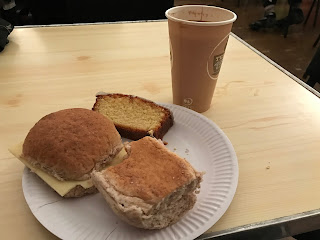 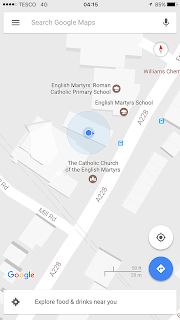 The church hall was warm and comfortable and I found it hard to engage in any meaningful conversation as I felt quite sleepy. Some did close their eyes to catch a few winks. 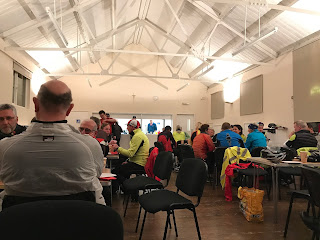 At 04:50 a.m. we emerged from the comfort of the church hall to find it still dark and with a chill in the air. This is always the point I feel the cold and I had to resort to putting on my light rain jacket and neck warmer.

The fog was thick in certain locations. We cycled along a narrow country lane with a marsh to our left and the raised embankment of open fields on the right. Fog swirled in from both sides making it very difficult to see. My mind played tricks on me and I could not get out of my head that I was in fact cycling down a narrow causeway with water on either side. The faint sound of Curlews and Gulls  calling in the distance only served to magnify this image. 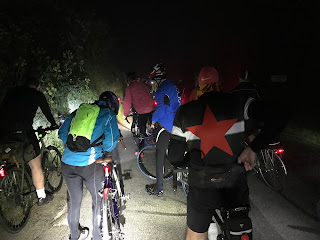 Dawn came slowly and my 05:30 a.m. things started to get lighter. The fog persisted and again in places got worse. In addition to this it was still on the chilly side. 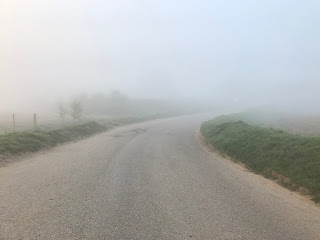 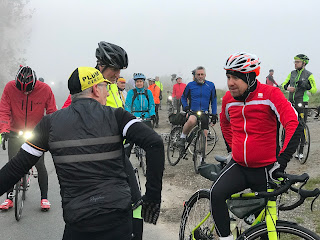 One part of our route took us on to a fairly busy main road. Thankfully there were few cars about as it was so early. One car that I heard coming on the other side of the road made an incredible noise! The engine was revved to what seemed near breaking point. I speculated as to what sort of car this must be? Surely it was a heavily customised Subaru Impreza? The reality proved to be a grave disappointment as an Austin Metro screamed past. For a few moments I was stunned and then could barely cycle for laughing. 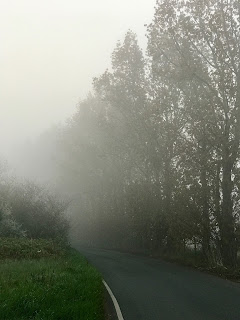 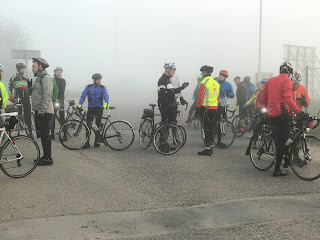 My Condor road bike was superb throughout. I make no secret of the fact that I love this bike! It can do just about anything. Hills are nothing to it. When things get really steep I can ride out of the saddle  comfortably and make a rapid accent. On descents I have a much greater level of confidence. The handling and disc brakes allow me to descend a great deal quicker than on my Brompton. Riding a road bike - although this is hard to explain - is at times a little like flying if that makes any sense and thus highly addictive. My Brompton bicycles are great but on a ride like this they are shown up to be what I suppose they really are - really well engineered commuter bikes. 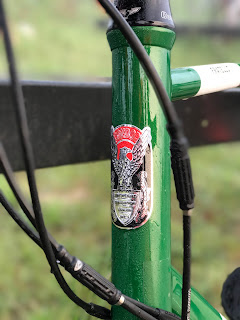 Even though the fog made promised views of a Russian submarine and Rochester Castle impossible, the landscapes before us as we cycled by, were stunning. 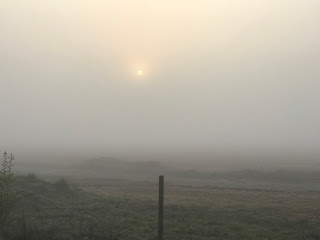 The views of cyclists before me were like those epic and slightly contrived Rapha films you sometimes see of cyclist against the elements. Of course what I was seeing was raw and authentic and much the better for it. 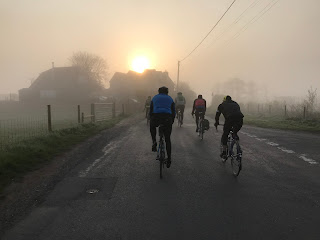 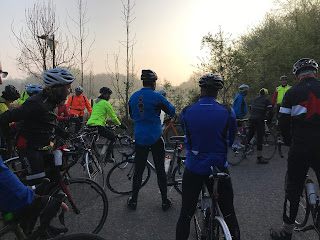 Arriving at Faversham and its unique parish church I again made a mental note to myself that I must pay this location a visit outside of a cycling night ride. The church is home of the tomb of King Stephen, Grandson to William the Conquerer which interests me enough to consider it.

Faversham also marks the tradition when on this ride where those who want to cycle as fast all the way to Whitstable can, while those who do not wish to, can cycle at a more civilised pace. I took the former. After the last couple of junctions where TEC's marked the way, those of us who wanted to go faster had the green light to do just that. 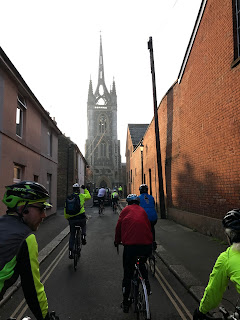 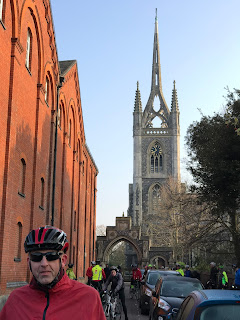 A group of about 8-10 riders went off in front of me and were in the distance. I managed to overtake two of them and keep the main group in my sights almost all the way - for once - before I lost slight of them completely.  Some riders on these rides are seriously quick when they want to be and many could leave me for dust at will. I really enjoyed this part of the ride and was surprised that my legs felt as fresh as they did.

As I neared Whitstable a large lorry slowed down traffic and once the back of the ride was broken I headed straight for Whitstable station to get the first train back to London as I a few bits and pieces to do. I clocked up 65.9 miles and on the train bound for St Pancras, looking at my beloved Condor road bike I felt as if I could have cycled another 65.9 miles.

I arrived back in London shortly after 10:00 a.m. and was home well before 11:00 a.m. which was pretty good. I am not sure when this post will go live but I am writing it late on Saturday night and I feel quite fresh. Sadly there is not another Friday night ride to the coast for a few weeks. There is however a Brompton ride to Brighton next week. If the week ahead goes to plan I should be able to make this.

Many thanks to Geoff and Simon for their company. Many thanks to ride leader Tim and the lovely people at the halfway stop. Many thanks to the TEC's and especially to Charlie who seemed to mark just about every junction for the entire duration of the ride!