Fun and disaster on overnight London to Whitstable

Overnight rides to the coast are brilliant and I had been looking forward to the London to Whitstable ride all week. There was that certain excitement all day that only looking forward to a Friday night ride to the coast can bring. With everything prepared, checked and ready two days in advance there was definitely not going to be any last minute rushing around.

The meeting point was not the usual Hyde Park Corner sadly but this was for a very good reason. The previous ride to Southend saw us all negotiating lots of roadworks and being slowed down in traffic, so the decision was made to meet further east at the entrance to Potters Fields Park.

Part of my journey to this location was by the tube. I am not a fan of the tube for several reasons. One of these was boarding and sharing the carriage with a large group of 20 somethings who were already drunk and adding to this with more alcohol being consumed on the journey to wherever they were going.

Now you might think that this was the worst part of the journey but you would be wrong. There was something altogether more annoying and chilling than a large group of loud and inebriated adults. At one station a large group of girls and their mums got on the carriage. I gather they had just been to a concert to see a group called 'Little Mix.' I have no idea who 'Little Mix' are but their fans - high on a cocktail of sweets, sugary drinks and having seen their idols - soon shut up the drunk adults mentioned earlier on I can tell you!!

Arriving at the entrance to Potters Fields Park there were already a few participants and it was not too long until the familiar sight of Mark (King of the Hill) came into view. Sadly Geoff was unable to make this one but David and Anne made up the numbers as far as hardened Brompton riders. (Anne was actually on a road bike for this one). 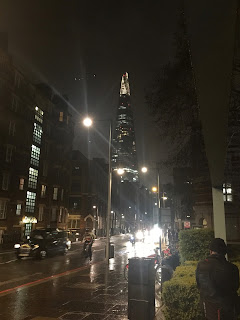 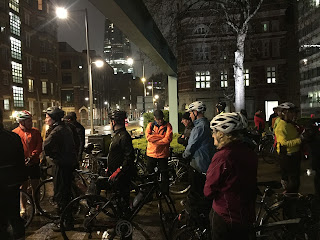 During the week, Mark's usual bike sustained a crack on the front of the titanium fork of his main bike. This resulted in him converting his beloved single speed into a two speed and taking that instead. He had been concerned about it getting wet and with it raining when we arrived he had perhaps resigned himself that it would indeed get wet and heaven forbid, a little dirty. It was then a bitter blow when another rider knocked over his bike and it was dashed to the floor. There was the sound of a bell dinging and the new saddle bag purchased specifically for this ride was sheared off its mount. With a few cable ties the saddle bag was secured but Mark was momentarily crushed.

Just after midnight we were off for another adventure and progress was pretty good. On these rides there are many different kind of cyclist and bicycle. Many are hardened mile monsters who could quite easily travel the 63 miles, turn around and cycle back the way they came. The one common bond is a love of cycling and especially night riding. 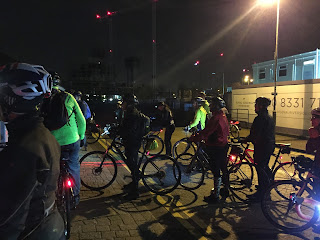 Some of our route was familiar territory as we had travelled this way on Brompton rides. For the first half of the ride we didn't stray too far from the Thames. One of our stops was at Woolwich Arsenal. At the underside of a flyover many of us 'used the facilities.' Well, when you need to go. 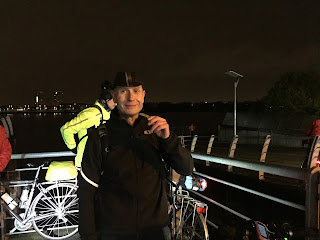 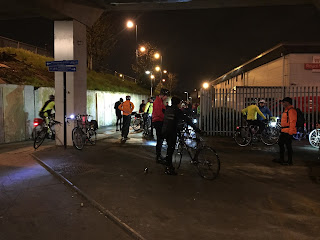 As we approached Rainham memories of us cycling through it came flooding back. In the early hours of the morning we were the only souls about but I imagine it to be extremely busy during the day. 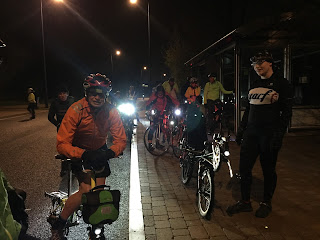 As for the Southend ride a few weeks ago I decided to take my Titanium Orange Brompton rather than my beloved P type. I travelled fairly light and didn't even bother with the front O bag, favouring the Carradice saddle bag instead. For illumination I used my Exposure Toro. This really is a beast of a light and probably more than needed. However, on the setting I had it programme on it can shoot out a constant 700 lumens for 10 hours.  I also wore a pair of Condor sock and cycling cap. Make of that what you will. 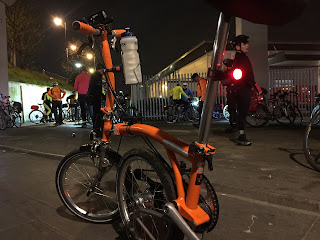 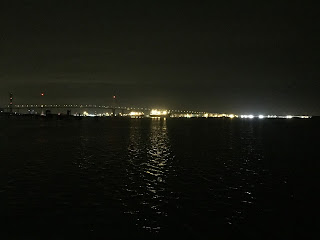 At another stop we had some great views of the Dartford Crossing. A few weeks ago I drove over this on the way to Canterbury. While framing the photo below so that my Brompton would be in the photo, it seemed strange that I had cycled this far. 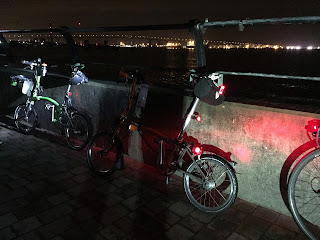 Weather wise, the light rain that was falling when we started the ride eased off. It didn't seem too cold until we had to stop. At these times when one isn't cycling the cold does make itself felt and I was glad to keep moving whenever possible. 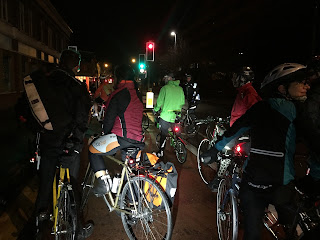 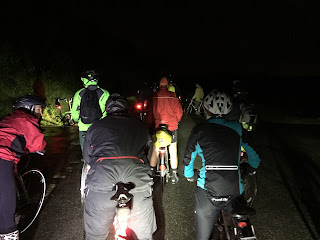 Our halfway stop came at the Church of the English Martyrs in Strood. This was a very welcome sanctuary where some quite wonderful cakes could be purchased. I opted for a couple of cheese rolls, a slice of fruit cake and a triangle of flapjack washed down with a cup of tea. Never has food tasted so good. 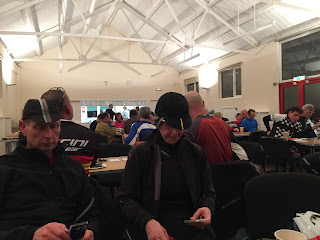 I think we were all very grateful to the good people who stayed up to feed and water us all and gave up their time to accommodate us. The off was 04:45 and Tim our ride leader - just as Bob had done on the Southend ride - told everyone to check their bikes for punctures. Again like Bob on the Southend ride, Tim discovered a puncture moments after uttering these words. 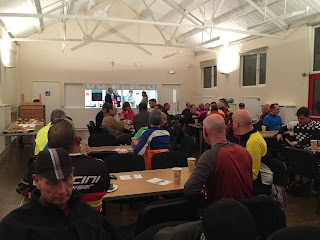 As always, coming out of the warmth into the cold was a shock to the system. As we set off I felt very cold and wished I had packed an extra layer. Less than five minutes later however I was fine.

With dawn on its way birds started to sing and the views looked stunning. This is one of the joys of rides of this type and seeing the sun rise while cycling along is a wondrous sight. 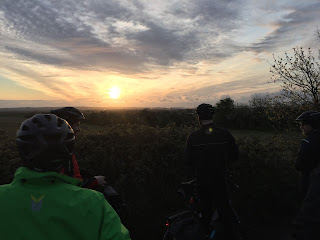 Not long after we set off from the halfway point I was finding my derailer not shifting as well as I would have liked. Not wanting to stop I pressed on. This was to proved rather costly. 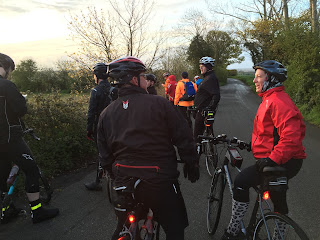 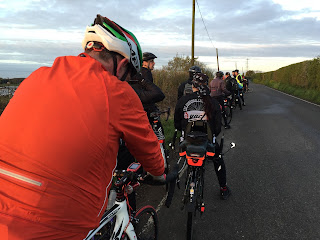 Cycling on further the derailer was not working at all and after a few miles I decided to stop and have a look as it was slowing me down a tad. To my horror I saw that the bolt holding the shifter in place was gone and the shifter was totally loose!

Needing a cable tie to at least fasten it all out of the way, Mr Mac came to my rescue and stopped to see if I was okay. Luckily he had a cable tie and with the cable and shifter tied to the frame I could continue, albeit with 3 x gears! Many thanks Sir! 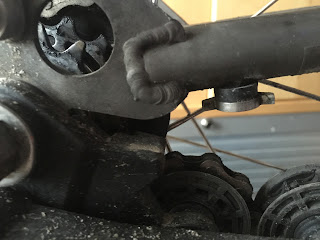 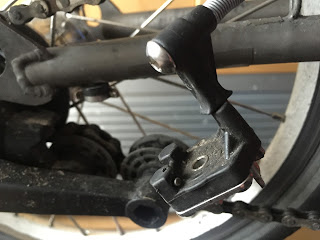 Three gears did make things difficult. The jumps were not particularly useful and it meant quite a lot of spinning. There was one large hill which was made all the more difficult by only having 3 gears to approach and ascend but I managed.

With blue skies we arrived at Faversham and took the views of its interesting 18th Century spire. The church is the resting place of King Stephen who was a grandson of William the Conqueror. As such it is one of the few churches outside London where a king has been interred. 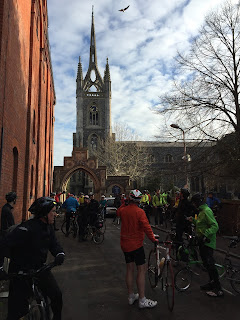 Not long after this our ride leader gave us a choice. We could split into two groups, those who wanted to cycle at speed to Whitstable and breakfast and those who wanted to get their at a slightly slower pace. Mark, David, Anne and I went with the former group. I was able to keep up with David and Anne for a few miles but lost them.

I was also preoccupied with trying to find a suitable location where I could, ahem, 'use the facilities.' This proved to be rather difficult as nowhere obvious came into view. With a need to go I parked the bike and went, not caring. A few riders passed me but I soon caught them up and overtook them.

Calculating that three was a train back to London at 08:50 which would get me into St Pancras at just after 10:00 I decided to head for Whitstable Station rather than breakfast. At the station I sent a text to Mark and one to Tim thanking him for the ride and boarded the train and tried my best to stay awake.

This was a great ride. The derailer was an annoyance but it did not detract from a great ride. My right knee ached for the rest of the day, probably as a result of using three gears but as I type this all is well again.

Many thanks to Tim for leading a great ride. Thanks to Mark for the company and banter and likewise David and Anne. (I have to say Anne was mightily impressive on her road bike and I barely spoke to her at all while riding...I couldn't keep up).

Hopefully we will all be able to do this again when the next ride London to Shoreham-by-sea takes place in May. With some new parts ordered I hope to have the Titanium Orange Brompton ready in a few days.