The IG Nocturne on a Brompton

Yesterday I took part in my first IG Nocturne. It was quite a day!

I was up early and already excited at the prospect of racing a Brompton. With a good breakfast of porridge, poached eggs, a banana and lots of water I felt fuelled up.

I decided to take my Raw S2L instead of my Orange M6L and I am glad that I did but more of that later. I did pay some homage to my beloved Orange Brompton with some orange accessories. 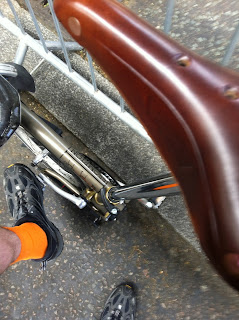 Heading off perhaps earlier than I needed to I made my way to Smithfield Market and signed in at the registration tent. With that done I was allowed inside the rider area. In here there were all sorts of bikes and riders. Brompton, other folders (not as good of course), penny farthings and out and out road bikes. 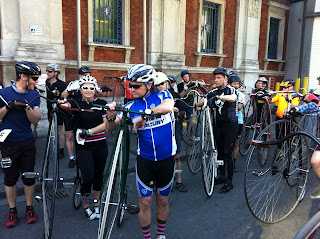 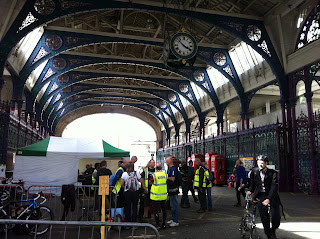 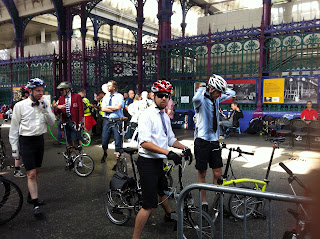 The "Brompton Team' were out in force in their burgundy blazers with Brompton livery. They meant business and for my money looked a great deal more formidable that other manufacturers. 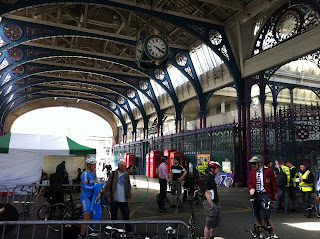 It was great in the riders area as I got to speak to lots of other riders entered in the folding bike race. Some like me had not done this race before. Some were just out to enjoy themselves. One chap had bought a black S2L Brompton that very morning, just to compete. There were of course those who were very serious and intent on getting through to the final. 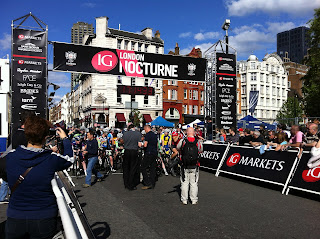 The penny farthing race was a sight to behold. I have of course seen them ridden on the Tweed Run but not as this ferocity. They raced for 30 minutes and I was out of breath just watching. The winner was an American gentleman who had flown in from New Zealand to compete. 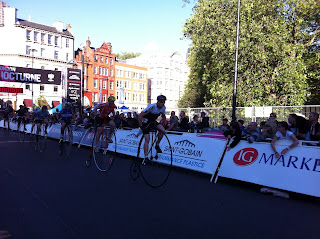 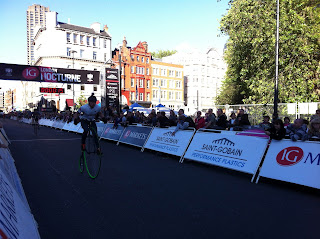 At 16:00 we were allowed out on to the course for a warm-up. I soon detected the beaming smile of the legendary @iCrazyBee a fellow member of the London Brompton Club in the crowd.

After a couple of laps we retuned to hear the race instructions. It was getting serious. It was getting close to the race starting. We were slit into two groups. The first group larger than the second and I was in the second. We watched as they made their way to the start, folding their bikes and walking up to the starting point. With a shout and cheers they were soon off, unfolding and going. The pace looked fast and the Brompton Team flew by in a blur. We waited...nervously....excited.

Our turn. We did the same and parked out bikes in the folded position and walked the 30 metres to the start. With the wave of a Union Jack flag we were off. I had a GoPro Hero 2 strapped to my head and pressed record. I ran and unfolded. I was off. The course was demanding and although not long required concentration. Soon I was over the start finish line to the cheers and banging on advertising boards on the barriers. The crowd were wonderful and created a great atmosphere.

After my three laps I was tired but on a high. It had been brilliant. I didn't expect to get through to the final - I wasn't really there for that but I wanted to know. After a furtive wait the names and positions were revealed. I got 16th place in my group and I was in the final! Bloody hell! The smaller group was almost divine intervention and might have helped me.

With a few hours until the final I returned to the riders area. I had a Red Bull drink - which were free and chilled with the other riders. Not long after I teamed up with @iCrazyBee and we watched the races.

The time came for the final. There was a tension in the air. Veterans of the race had regaled us with stories of crashes around corners but I was unconcerned. I was going to enjoy this - I may never get into the final of this particular erase again! I pressed record on the GoPro and got the cowbell @iCrazyBee had acquired ready for later.

A camera crew interviewed me briefly but I cannot recall what I said. A couple of riders were told to fold their bikes fully as they had left bits unfolded. Tut! (None were Brompton bikes I hasten to add).

For the third lap I high-fived as many as I could. I was enjoying this. On the dangerous tight bend after the start / finish straight I saw a rider on the deck. He must have been okay as he raced past me a lap later.

Eventually my five laps were done. It had been a great race and a great day. I thoroughly enjoyed it and would love to have a go next year! The highest complement I can pay is to say that it was nearly as much fun as the Brompton World Championships and believe me that is high praise indeed.
at June 10, 2012