Brompton Ashford to Dungeness and back

It had been ages since I cycled to Dungeness. The idea to get the train from St Pancras to Ashford and cycle there and back to Ashford was talked about many months ago but a combination of availability and rail strikes meant that it could not happen until Saturday, 22nd October.

I had intended to retire my Orange Titanium until perhaps March / April next year but this didn't happen. My Cloud Blue, which is my commuter hack, was so filthy from my rainy commute the week leading up to this weekend and with me using it up until the Friday before, there was no time to give it a clean. My Orange Special Edition was also out of action as I had been unable to get the shifter working. (More on that another time). So, my Orange Titanium came out to play. 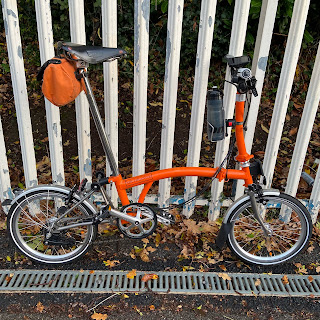 The meeting point was St Pancras for Dr John and I and as I got there in very good time, I decided to have a spot of breakfast while waiting. I was soon joined by Dr John who is currently enjoying his well deserved retirement. He had a new inner liner to his existing helmet that he said made it safer. I instantly thought of the hair net worn by a character from Coronation Street called, Ena Sharples. This brought me to two conclusions. First, the fashion police of NW8 and SW7 would have a field day if I wore that cycling through! Secondly, it really did remind me of that hair net!!
We boarded our train in good time and were able to get a good spot. In addition to this, the train carriage was pretty quiet. At Stratford Station we were joined by Geoff and our trio was complete. 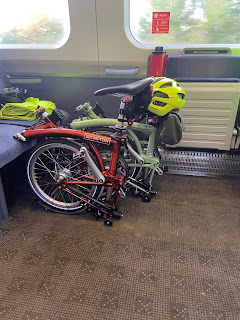 After setting my Wahoo to point in the general direction of the lighthouse at Dungeness, we set off. Dungeness was about 20 miles away and there wasn't any rush, so I took a gentle, conversational pace. Naturally I stopped whenever there was something of interest to take a photo of. 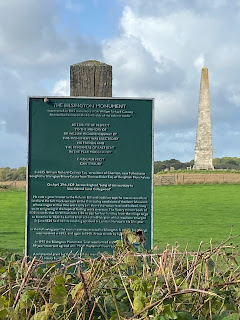 It took a few miles before we left the urban behind and when the Kent countryside arrived, as always, it did not disappoint. 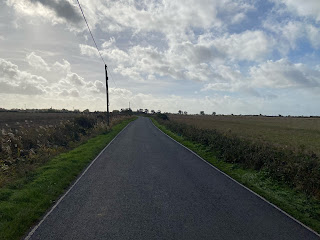 The only drawback to all the loveliness we cycled through, was the strong headwind that stayed with us almost the entire route to Dungeness. 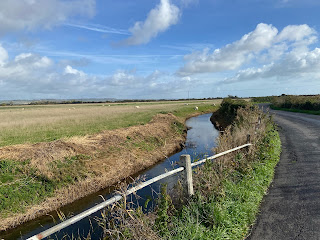 The draw of Dungeness is its uniqueness. It is one of the largest areas of shingle in Europe. As soon as we reached views of the sea, the strong winds we had cycled into disappeared and the sun even made an appearance! 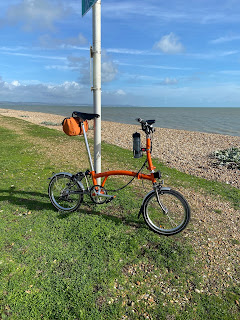 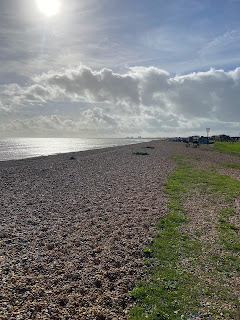 Naturally, it was time for a few photos and once I started everyone was at it. There is something very different about Dungeness to other seaside towns. It does have a certain remoteness about it. 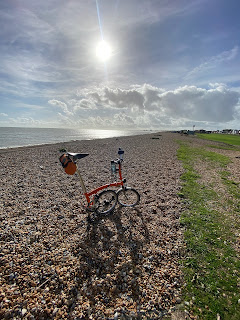 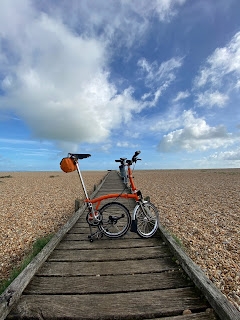 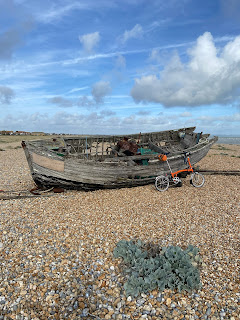 Prospect Cottage, the former home of the late film director and artist Derek Jarman was a welcome sight and looked as lovely as I remembered it from my last visit.  Part of John Donne's poem, 'The Sun Rising' is still there to make you pause for thought as you take it all in. 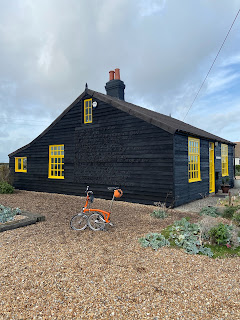 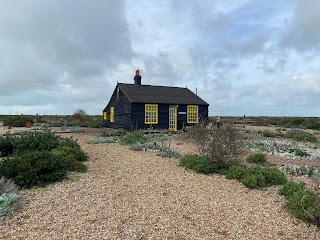 There are several outlets where you can buy seafood in Dungeness but we opted for the Britannia pub. Rather than fish and chips I opted for a burger and very good it was too. 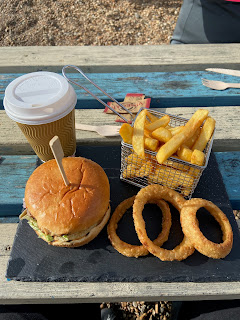 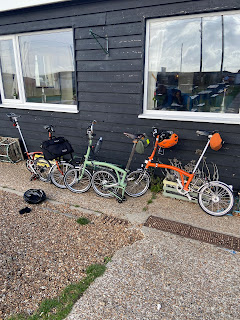 After luncheon we did a few more stops at the two lighthouses. The Old Lighthouse had a Grade II listing. Opened in 1904 is was decommissioned in 1960. For a small fee you can climb up to the viewing platform. 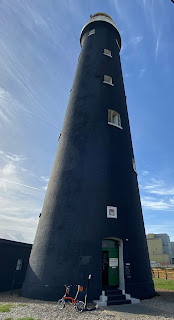 The more modern version started operations in 1961. For me the Old Lighthouse wins. 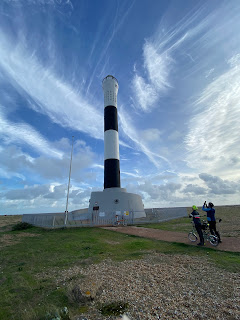 The nuclear power station is ever present. In 2015 it was granted a second ten-year life extension, which extends its probable closure date to 2028. 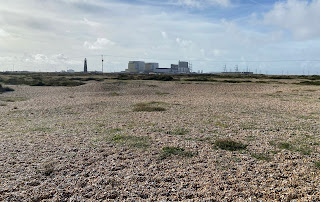 The miniature steam railway has been going strong since 1927 and we all stopped to see if one of the engines might just pass us by before heading back to Ashford Station. 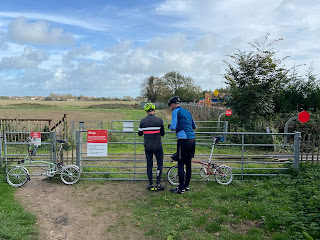 Hearing it long before we saw it, the little train - a little like Thomas the Tank Engine - motored past, steam flying and some happy smiles on the faces of the many occupants of the little carriages. 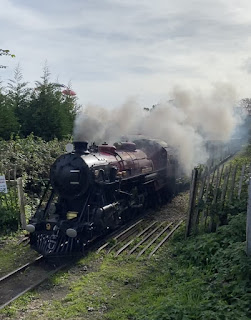 The journey back to Ashford was certainly memorable. Part of the route - which Dr John and I had definitely cycled on our previous visit - gave way to a muddy track. The photo below shows the best bit which could not be cycled at all. The area in one of ongoing development as new estates are built. 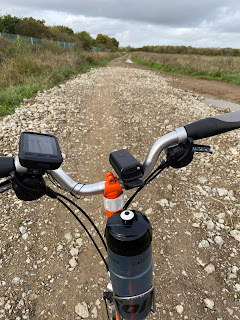 Eventually we made it back to Ashford (albeit with muddy bikes) and got on the train back to St Pancras. We said goodbye to Geoff a few stops from London and once back in the big smoke, I said goodbye to Dr John.
A memorable adventure and one to repeat in the summer months of 2023 perhaps. Many thanks to Geoff and Dr John - despite their bikes needing a good clean afterwards! 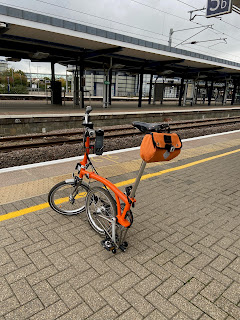