What seems like ages ago now, on Friday 23rd September I joined what was to be the last group Friday night rides.

There had been lots of forecasts of rain for this ride. My usual personal weather forecasting of sticking my head out of my front door ten minutes I was to leave home, made me think that there would be little rain, so I packed a light rain jacket for the saddlebag and that was it.

I decided to take my Orange Special Edition with me as I have relegated my Orange Titanium to hibernation for the winter. It might make a return sometime in March 2023 for what might be the first group ride to the coast of 2023.

Just before Westminster Bridge at the lights a fellow Brompton rider chatted about all things Brompton. Seeing my moniker on my bike he asked if I was off for a night ride to the coast. I said yes to the night ride but informed him I would be cycling to Ashford. Saying that he should give it a go one day, he shuddered and said, 'no way could I do that.' As the lights changed I said that he should and as I passed him he simply shouted out, 'okay.'
A few hours before the ride, Mark - King of the Hill - sent a text message asking if I was going to ride up at the front with him. This was going to be the first of these rides where he would be ride leader. Naturally I said yes and I would assist Mark for much of the ride - especially the London section - helping junctions being waymarked as we went along.
At the meeting point, there were a few familiar faces. Jenny, Eben, Dr John and Ian who had come all the way from Sheffield. After the briefing we were off into the night and a lovely night it was.
London is a rather large place as we cycled through Bermondsey, Deptford, Lewisham, Eltham heading ever further southeast. Our pace was purposeful and Mark was doing a great job leading the ride. Ironically we had to wait over 30 minutes at 'Mark Way' while a mechanical was sorted out by the excellent tail end Charlies.
There were a few tasty hills on the way to the halfway and a descent that had to be taken seriously due to the gravel and potholes. We arrived at the halfway stop later than planned - due to the the lengthy wait for a puncture to be repaired - at just after 04:30 in the a.m. The location was a village hall in Golden Green. For me this was a little like a time warp as it resembled something out of 'Dad's Army' and I could picture meetings being held there, made better by cups of tea and homemade cake.
This partly became a reality as, Tim and his wife (usually purveyors of the finest halfway stop in the land at the Church of the English Martyrs in Stroud) had decamped to this location. The offerings where the same: ham and cheese rolls; Victoria Sponge; Lemon Drizzle and Bread and Butter Pudding.
This was all consumed with enthusiasm by all and as for me I tried to keep my eyes open. Conversation from me was sparse as a result and at any moment I could have fallen into the deepest fo sleeps with snoring and quite possibly mild dribbling.
Thankfully both my companions and I were spared from this and almost an hour later we left saying our goodbyes and thanks to Tim and his wife, to an early morning still consumed by the dark. 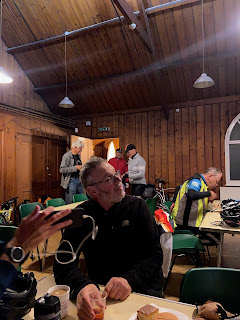 The second half allowed us to experience the slow transition of dawn and the sunrise produced its usual wonderful hues and colours. The remainder of the ride was a great deal flatter than the first half which allowed for a purposeful but still conversational pace. 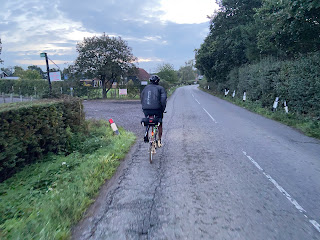 The Kent countryside again provided some glorious views and the odd oast house confirmed where we were. 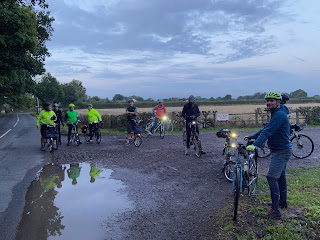 We arrived at Ashford just after 08:15 and saying goodbye to Mark I made my way to a near deserted Ashford International Station. From there I got the fast train back to London and was home in excellent time. 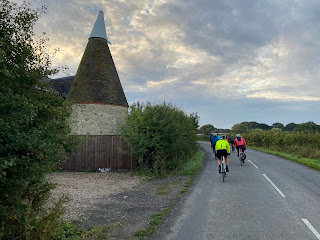 Another great adventure. Mark did a wonderful job up at the front and the tail end Charlies were equally good at the rear. The next ride will be sometime in early 2023 but knowing me, I will try and drag Dr John out for a pre-season nocturnal excursion somewhere if the weather is kind beforehand.
There you have it dear reader. Possibly the last night ride of this type for 2022. I still have hopes that there will be a Christmas Lights all nighter but just have to enlist enough willing participants to join me.
Until next time, stay safe out there.