Today was the Christmas ride with the lovely Friday peeps. Normally I would cycle with most of the participants today on a Friday night to a coast destination. This morning it was not Friday, not was out destination to the coast. This was just an opportunity to get out and cycle a few miles around London.

My start point was NW8 and I cycled the couple of miles to Hyde Park Corner in the rain. It did become quite heavy at one point, so I stopped outside St Marylebone Parish Church to put some waterproof over-trousers on just on case. It occurred to me that the poet Lord Byron had been christened there. Not being a fan - I think due to O or A-level English Literature many years ago - it took all my self control not to moon in the general direction of the font!

I arrived at the meeting point at Hyde Park Corner in good time and already there were many riders waiting for the off. 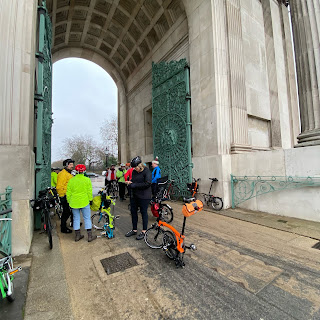 These ride attract all kind of cyclists and all kinds of bicycles. The Brompton was well represented as was the recumbent division. 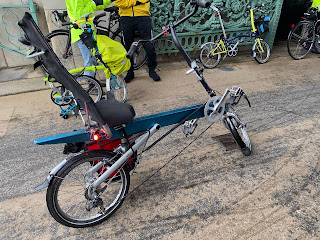 Our ride leader Bob, sensibly decided to take his rather unique Brompton out today and the orange O Bag that I sold him looked rather fine I have to say perched on the front. 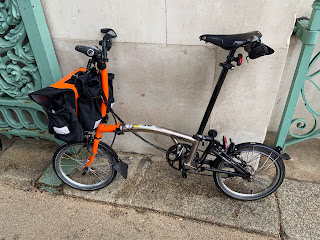 We set off in good time and there was no theme for this ride, just cycling for pleasure, catching up and inevitably making plans for 2022 - always a great thing to do! 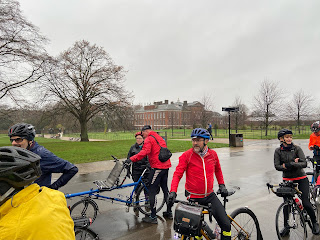 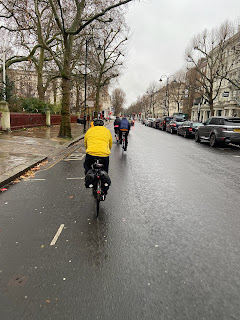 We passed the Chelsea Arts Club and were beckoned to bring our bikes over for a photo. This club is one of those private members clubs with arty and theatrical types. I think that you might guess the next bit. To become a member you have know a few people who are already members and get them to propose you for election and all that sort of thing. There are lots of these sort of clubs in London and I am not a fan. 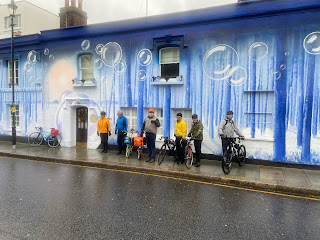 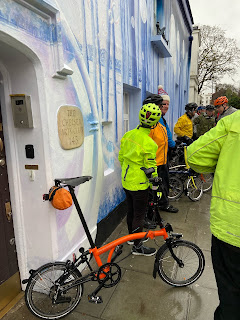 On the road leading to Albert Bridge there are two blue plaques of people of note. Bob Marley and Captain Scott. I chose wisely. 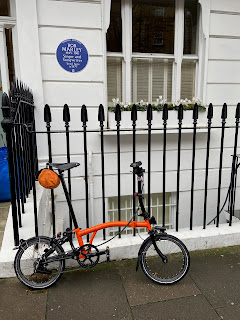 As I cycled across Albert Bridge, it dawned on me that London was very quiet for a Wednesday morning. It should a great deal busier. I think you can guess why this might be the case. After this we looped around Battersea Park, crossing the Thames again. 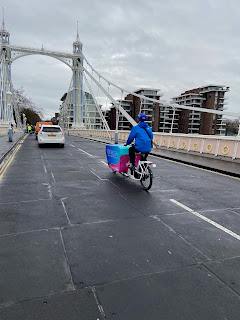 Cycling up The Mall is something I have done more times than I care to count but I do like to see lots of other fellow cyclists out and about. 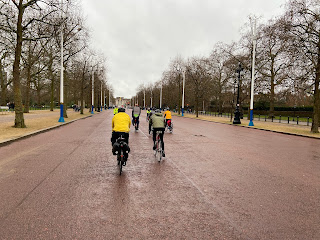 We eventually found our way to Regents Park and proceeded to complete a lap of the outer Circle. This is very much roadie territory but I loved it when our ride leader Bob set blistering pace, overtook a couple of roadies when them doing everything in their power to overtake.
My abiding memory of this ride was Charlie's quite spectacular Christmas hat. This boinged up and down as he cycled along. 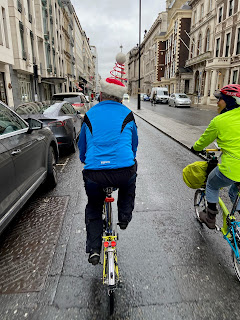 Not long after completing the Regents Park lap I had be be elsewhere so I peeled off. This was a lovely ride - despite the weather - and may well be my last for 2021. Many thanks, as always, to Bob for leading and organising.
Until next time, stay safe out there people!
at December 29, 2021