Unintentional 100 mile overnight London to Southend and back!!

Late last week a of friend put forward the suggestion for a an evening ride to Southend. The idea was a simple one. Start off after work from central London and head off towards Southend. Once at Southend we would get the last train - just after 23:30 - and be back at Fenchurch Street less than an hour later. Simple. Can you guess what might have happened?

The meeting point was Hyde Park Corner early Saturday evening where I was to meet my old friend, Tom who was a new convert to the Brompton. His new bike was a CHPT3 and he liked it a great deal but knowing Tom as I do he will probably tire of it and move on to another one in another colour or something totally different.

I was about to take a photo of my bike - that's what Brompton people do - however searching my pockets and everything else I could not find it! After a momentary fit of the vapours in which I fancied some London footpad had pilfered my phone, it dawned on me that I had left my iPhone up the road in SW7. In fact in my haste I had also left my water bottle and small wallet. This wasn't an issue as Tom assured me he had his phone with him and we could buy anything we needed using it. We headed off.

London was very busy when we set off shortly after 18:00 and things didn't really get any calmer heading east. Tom was loving his new Brompton and it was strange to see him on anything other than his usual mountain bikes.

We arrived at the usual halfway stop, Junction 31 services off the M25 in very good time and things were very different than when I have usually arrived there at about 03:30 in the a.m. on night rides starting at midnight. Then, little is open and no-one is around. This time a great deal more was open and the place was really busy. Tom treated me to a coffee, muffin and sandwich.  We happily ate this content in the knowledge that we were making excellent time. In my mind I was already planning the day ahead.

Tom is no stranger to nocturnal rides but this was his first on a Brompton. He can normally be found on one of his many mountain bikes - that seem outrageously expensive - doing lots of night trails. His favourite is a London to Brighton route that he claims is more than two-thirds all off-road. On his bike he had a huge Exposure light the brightness of which was astonishing. Pointed down towards the road, so as not to inconvenience drivers, it illuminated the road ahead for both of us.

After the halfway stop the roads were quiet and the simple joys of cycling along in the middle of nowhere, chatting away about all sorts, hearing the sound of ones bicycle working and unseen nature all around made the miles fly by.

We made excellent progress along a tried and tested route and as always my Wahoo made navigation effortless. I was initially worried about the slick tyres on Tom's CHPT3 being puncture prone but my fears were unjustified. They seemed pretty good.

Southend came up very quickly and was extremely busy. The seafront was heaving. There were brides and grooms on hen and stage nights, taxis waiting for customers and generally lots of people out and about. With a train to catch and roughly 15 minutes to spare we headed for the station and the last train to London.

Heading to the ticket machine Tom attempted to pay for our tickets using his phone. This is where disaster struck. After several attempts he was unable to pay using it. Without enough cash between us (I only had £3 in coins) and the last train about to depart, there were few options. Using the last of my money to buy some water and a chocolate bar I reversed the route on my Wahoo - which reminded me about one-way streets - and we were off.

The first few miles felt very strange. I didn't actually feel tired at all and I was thankful that the route to and from Southend was more or less flat. It was as if the ride had just started but the difference was that after just a few miles it was very quiet.

Arriving back at Junction 31 services more or less at the same time night rides starting from London arrive there, seemed very strange. It was a crisp outside and we welcomed the warmth and sanctuary it afforded. We decided not to stay long and headed back outside. Layering up - as we both felt the cold - we set off, only to take the layers off after a couple of miles as they were making us too hot!

We approached the outskirts of central London at about 0600. I was glad to be back! The photograph below - taken with Tom's phone - was on the Millennium footbridge just before we went our separate ways. Many thanks to Tom for the idea, the company and the adventure.

In all we clocked up just over 108 totally unintentional miles. I have often thought about cycling back from one of these rides, with Southend always seeming like the best option as there aren't too many hills, but have never got round to doing it.

As I cycled back, London was empty and no-one was about. I suspect that this will sadly be the last of the night rides to the coast for this year and I will probably have to wait until a few weeks into 2020 before they resume. What a way to end the 2019 season though!! 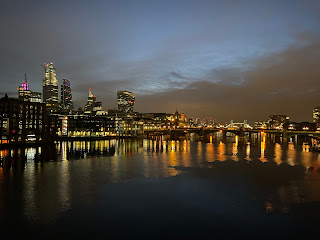