Friday was the start of the cycling season of night rides to the coast. I love these rides and as such it dominated my thoughts in the days leading to it. Having bought a new Brompton - yes you read that correctly) I was itching to take it with me for its first proper outing.

My new Brompton is a an all black special edition - with orange naturally - S6L. Regular readers will know that I had a titanium S6L and added lots of black parts but for me it just didn't work and I ended up selling it some time ago.

When I headed out it was already raining lightly and this was to be a big part of this ride. Cycling through Hyde Park and Hyde Park Corner memories of my first night ride to the coast came back and that same excitement was there. The park also brought back other memories it being two years to the day since my dad passed away. When I reached South Carriage Drive I could almost hear his wheezing laugh as he commented on me having purchased another small wheeled bicycle. 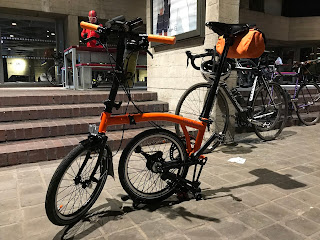 Arriving at the National Theatre, Dr John was already there on his Brompton and we were soon joined by Mark and Geoff on big wheels. It was the first time I had seen Mark's big bike and it was a beauty. 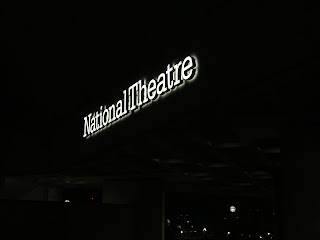 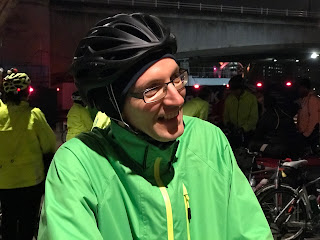 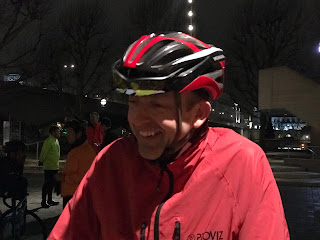 After a safety talk from our ride leader and all round good egg Bob, just after midnight we were off into a light drizzle that was to persist until the ride was almost over. 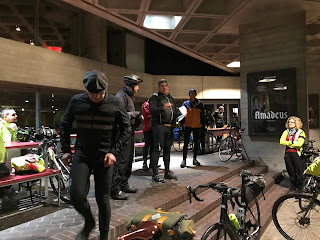 Sadly, after only covering 1.5 miles we had to wait for a mechanical issue to be resolved. However with near military precision Bob had arrange for the rest of us to wait under cover! 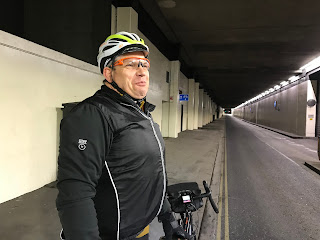 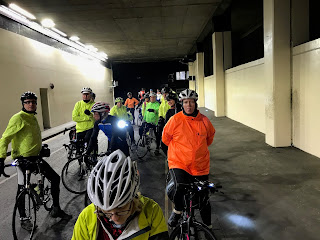 I think it was about 03:40ish when we arrived at the Junction 31 service on the M25. I say services but there was very little open or on offer. Most of us had taken the advice of packing some refreshments of our own but for some reason the cup off tea I bought was rather good.

After spending about 45 minutes warning up and drying out we headed off into the early morning. It was still raining and more than a little chilly. 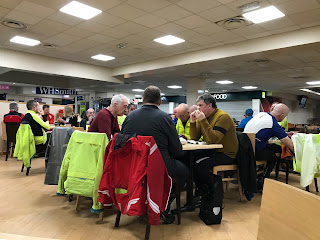 As dawn approached there were sections where one could spin the pedals a little more freely. Riders thinned out considerably and I found myself cycling on my own for a few miles with the faint red glow of a rear light several hundred metres ahead. 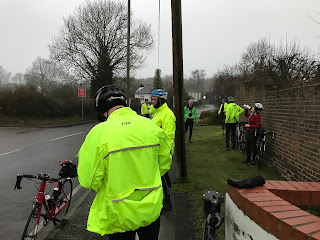 My new Brompton performed admirably and liking the more stretched out position of my Condor road bike, I found the lower and slightly more forward riding position that is a Brompton S-type very comfortable. Writing of comfort, one aspect that was not that comfy after about 40 miles was my brand new B17 Brooks saddle! I certainly knew that it was new I can tell you. I made a mental note to apply some proof hide when I got home. (To that saddle that is)! 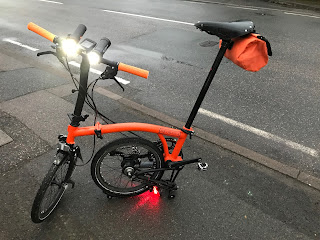 There were lots of first time riders and they equalled about half the number. I hope that they weren't put off by the weather. This group of riders are a fine bunch, made up of people from all walks of life. What they ride is equally as varied. I like the way that no one is left behind. Where help - usually in the form of a Jedi Master-like Tail End Charlie - is never too far away and where the emphasis is on the journey rather than how fast you get there. So many clubs are filled with boring types who are not inclusive, selfish and downright rude.

About 50 miles in a fellow rider said that he thought my rear wheel looked a little wobbly. Stopping to check I wasn't sure. It looked like the tyre was making wobble but everything else looked okay. When I got home I rang Brompton Junction and booked it in for its free first 100 mile service and will mention it then. 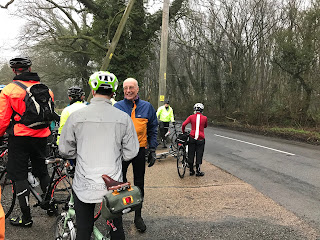 When we were approaching the last few miles I asked Geoff if were were nearing the train station of Leigh-on-Sea to which he relied yes. With us arriving at Southend later than planned, a commitment later on and suffering from a brand new Brooks saddle I stopped opposite the station, said my goodbyes to the Tail End Charlies and headed inside.

Getting the train to Fenchurch Street before 09:00 meant that I arrived back in London well before 10:00 and was home well before 11:00. I clocked up 58 miles in all.


Despite the constant rain, the slightly later finish and not making it to Southend I still enjoyed the ride a great deal. For all of this years night rides to the coast I have decided that I will do them all on a Brompton. I have not in any way neglected or gone off my Condor road bike - which I will of course still use - but for these rides for some reason I feel compelled to do so on small wheels.

Many thanks to Dr John, Mark and Geoff for their company and to Bob for leading the ride. Whitstable - one of my favourites - is in a couple of weeks and I already have a few additions to my new Orange all black in the pipeline. I'll get round to posting some better photos in the not to distant.