Today was a day to remember for lots of reasons and the fact it was the 'Rapha Nocturne' and I was participating, certainly played a big part. This would be Nocturne #7 for your truly.

Setting off in good time in my full Orange Nocturne outfit and Orange Brompton through busy Saturday afternoon London streets certainly required a thickness of skin I can tell you! I had a couple of marriage proposals, a few people shouting out that I was gorgeous, that they loved the outfit, that I had brightened their day to people risking life and limb to take a selfie with me or ask...why?!

I had agreed to meet my friend and veteran of many a Nocturne Mark - King of the Hill near Barbican but I heard the familiar voice of Mark before I got there. We found  a suitable watering hole, sat down and chewed the fat for while.

As we weere sitting down a Penny Farthing rolled dow the street, closely followed by a chap on a riding his road bike with one hand while the other held on to a set of bike rollers! Only in London; only at the Nocturne! 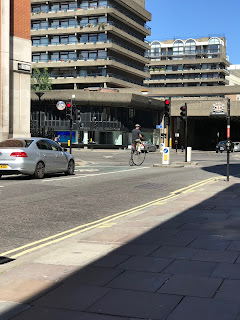 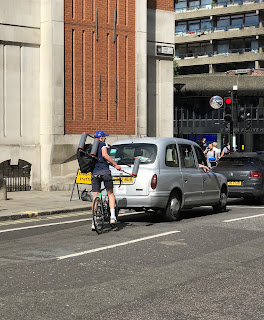 Setting off before 16:00 and our registration we stopped to take a photo of our bikes in front of some sort of neon light. It looked pretty good. 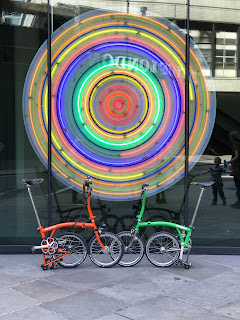 On our way I saw 'Kai Wong' from DigitalRev and now doing his own thing. I was so happy to see him - as i love his videos - that I could not hide my enthusiasm. He was understandably a little taken aback by me in my Orangeness but we shook hands and I wished him well as did he with the race ahead. It later struck me that he may of thought I was being let out for the day as some sort of care in the community excursion! 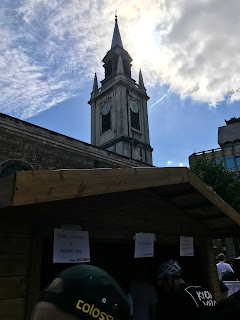 Registration was quick and before we knew it were in Guildhall in the riders area. It was there that I saw my partner in crime Andrew who had sensibly come out to play. It was good to see him. 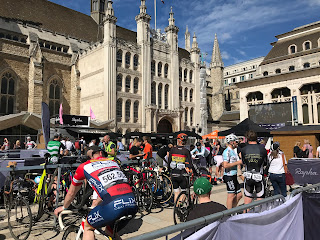 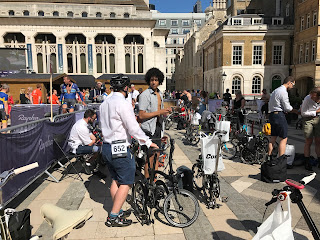 When registering we were given a 'Condor Cycles' bag containing a few bits and a water bottle. I made a mental note to use this bag every time I go shopping at Tesco until it falls apart. 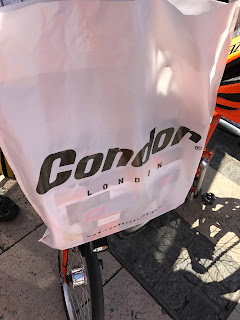 Mark had brought mean of his fabled 'Beet It' shots. This was consumed almost exactly one hour before the race - as per the instructions. 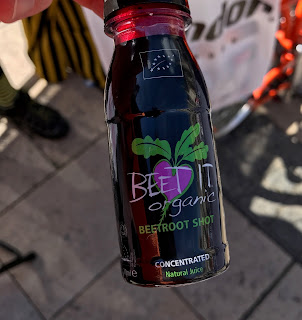 With my Titanium Brompton sold I was down to one bike which was of course my trusty P-type. I put on some Kojak tyres and removed the mudguards - as that it what makes all the difference right - but kept everything else as normal. 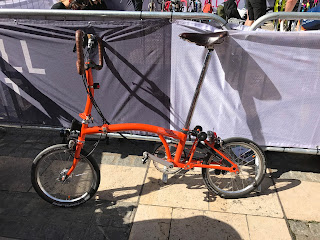 With a riders wristband came the perk of a free Rapha espresso. Making our way to this I spied a JTL Condor trailer with Ed Clancy's Condor road bike. It dod look rather special! 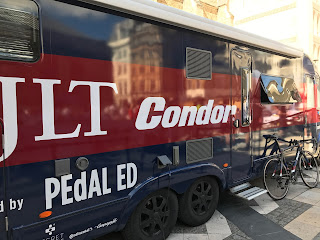 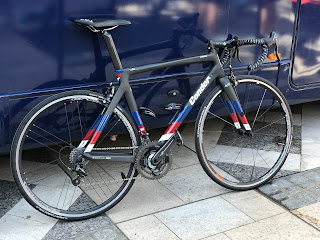 Waiting in the queue for our espresso a DJ was pudding out all manner of sick beats to use common parlance. 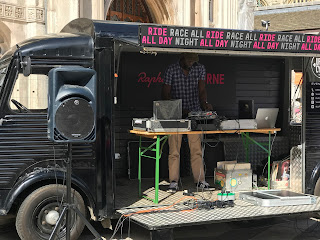 The coffee machine was rather special as was emblazoned with the Rapha moniker everywhere. With our espresso in our hand we headed back to the the rider area and never did an espresso taste so good. 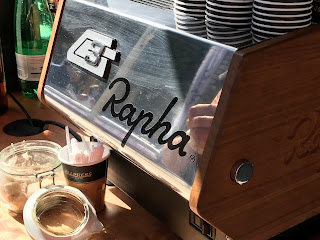 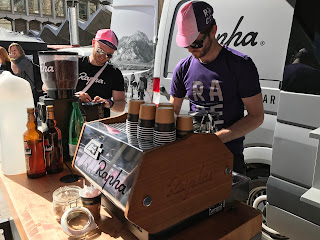 Joe from Brompton was sporting his two speed with an outrageous chainring. He would be quick on this for sure! 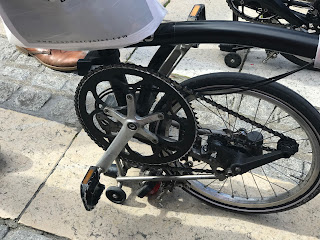 Andrew looked good in his usual yellow and black stripes and the pair of use were even interviewed on camera. I suspect the footage will go on the cutting room floor but it was nice to have about 2 minutes of fame. 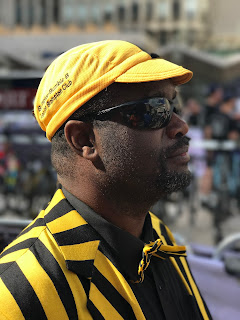 It was great to meet lots of other Brompton riders, some of which were readers of this humble blog, although there has not been a great deal for a while. 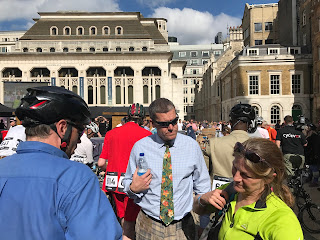 Our time had come and the call was made for us to assemble. Mark looked nervous. I did not. There is of course a good reason for this. Mark is a contender and has placed very well in all the races he had entered. I have found myself respectfully placed in the lower down the batting order. 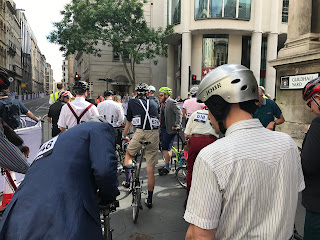 Drawing a number from a bag this signalled where ones bike would be placed own the grid. Looking for the corresponding number bikes then had to be folded and left while participants retreated to a suitable distance. 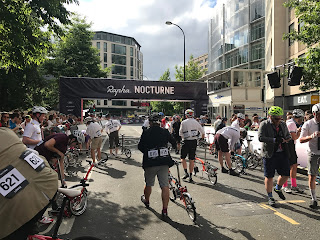 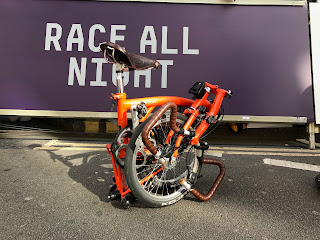 A gentleman should never run but I do make an exception for a sporting activity so when the countdown reached the point we ran like people possessed, I joined in and my gait - in SDP shoes - could be best described as mincing. 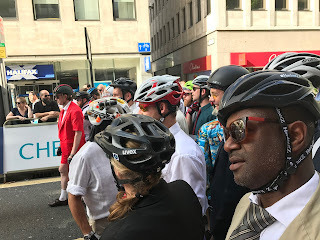 The race was certainly full on. I didn't get a wonderful start but knew that I would be able to make up a few places. The race was scheduled for 10 laps and I had to curb my enthusiasm in going too fast for the first couple of laps.

A few of the straights were brutal in terms of a strong headwind but I was carried along by a very enthusiastic crowd who gave me lots of encouragement as I cycled round as fast as I could. For some strange reason they seems to know that I was Mr Orange and shouted out lots of encouragement. 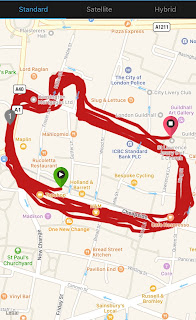 I don't know what lap if was but I saw a rider ahead who was roughly the same speed I was and wanted to cycle at. I decided to tail him and for several laps I did just that. The Terry Thomas in me came out on the last corner into the home straight as I overtook him and cycled furiously to the start/finish line about 200 metres away. 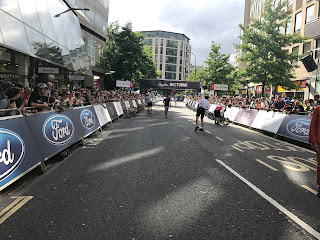 As we returned to the rider area the winners were announced and appeared on a big screen. Joe from Brompton placed second which was excellent.

Once recovered we headed out of the rider area to meet up with some familiar faces. We saw James, Alasdair, Chun-Han, Roger, Sam, Alex and the ever smiling Chris. It was lovely to see them all. Having to get back I said my goodbyes and as so often Andrew and I headed off. Hopefully there will be more adventures for the two of us in the very near future. Watch this space. 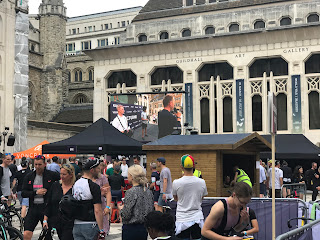 This Nocturne was perhaps my favourite of all the ones I have participated in. I really enjoyed it. Many thanks to the organisers for putting on a great event. I certainly want to be back next year!! Perhaps I should start the training now? 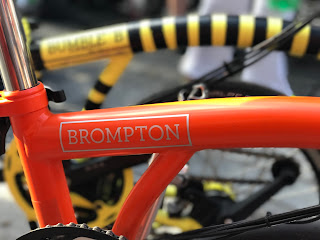 Email ThisBlogThis!Share to TwitterShare to FacebookShare to Pinterest
Labels: Nocturne