Quite a few of you have contacted me as my blog posts have been few and far between of late. I have been incredibly busy and just haven't had the time. I hope that I am able to write a few more soon so don't worry I haven't stopped or gone anywhere.

A few Fridays ago after an extremely busy few weeks at work I managed to commit to a ride I had been looking forward to greatly. I have done London to Oxford and Oxford to London, but these have all been during the day. The difference with this one was that it would start at midnight from Oxford.

The first part of this nocturnal adventure started with me getting to Paddington by about 09:30. I had decided to go all public transport which regular readers will know I hate. Anything too crowded doesn't agree with me. Luckily things were okay on the tube and the only thing I had to endure were some partially drunk middle aged ladies asking about my Brompton.

Arriving at Paddington in good time I saw some of the troops - Zoom Zoom, Brian - back to good health but with a nasty scar and so my night riding partner Geoff. Also joining us was Jenny and James. It was great to see them all and I it would be true to say all looked rather excited at the prospect of an adventure.

The next part of the adventure was asking a very helpful and tolerant member of staff about my e-ticket. I had bought the ticket via an app and showed him my iPhone screen. He informed me that i merely show it at the barrier. It was all a bit Star Wars. 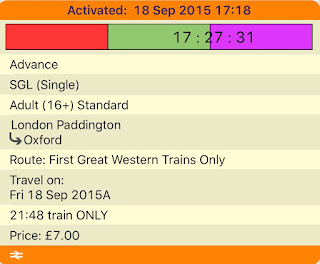 We chewed the fat for a while waiting for details of our train to fire up on the notice boards. When it said platform 11 we got ready and headed off. Tom, also joining us was nowhere to be seen and we hoped that he would make it?! 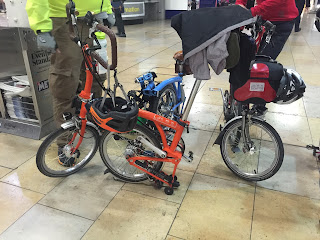 Platform 11 proved to be a considerable distance from the main part of the station but eventually we made it. We managed to get the bikes on one of the racks and settled down to the journey of just under one hour.

Thankfully with moments to spare Tom got on the train and had made it. He had gone to the wrong platform however realising his error made a dash for the correct one. 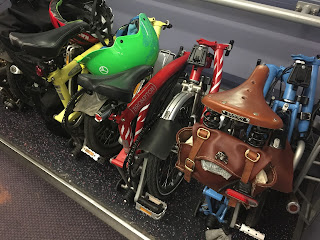 The journey went quite quickly. Tom had a new Exposure light that looked pretty mean, Zoom Zoom and Geoff took the opportunity to rest their eyes and the rest of us chatted away about all manner of things. 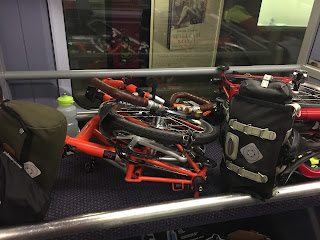 We arrived at Oxford with about an hour or so to spare. We were greeted by Dina and Rob who although not going on the ride took the time to come out and see us off, which was rather lovely of them. In addition they were armed with homemade brownies and I have to report they were wonderful! 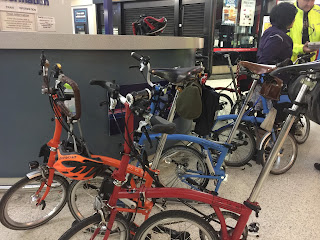 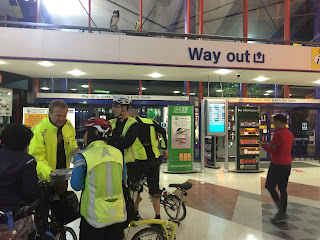 Soon our ride leader, 'Kevin the Roadie' arrived but quite fittingly on his Brompton. Along with Kevin were a couple of his friends on big bikes. One of these was a veteran of the Fridays rides.

At more or less on the stroke of midnight we headed off into the night air. For the time of year it was a warm night and I only needed a base layer, cycle top and a 'Proviz Reflect 360+' which Proviz had kindly sent for review. This jacket was an update to an already great jacket, being more breathable than the original. A full review in the next few days hopefully. 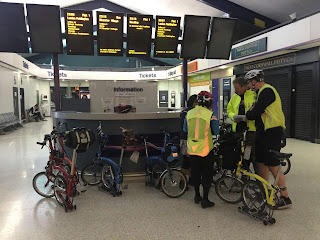 As we set off into the heart of Oxford, lots of people glanced in our direction at the sight of several Brompton bikes and riders riding purposefully in a peloton. I suspect some may have thought us quite mad but most Brompton owners I know tend to be a little eccentric.

The pace was excellent and it allowed lots of conversations about just about every topic you can think of. Zoom Zoom was enquiring as to whether I was going to upgrade to the new iPhone 6S. Despite me saying I wasn't I am not sure that he believed me. By the time the night was over Zoom Zoom I was predicting that Zoom Zoom would be not only upgrading to said iPhone but also buying the same light Tom had. 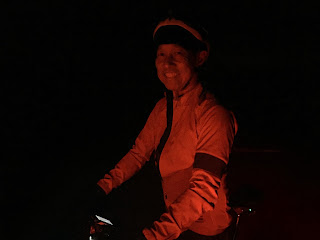 As always on these rides every so often we stopped to regroup. All riders were doing really well and we did't have to wait that long for anyone to catch up.


Whenever I rode with Geoff I had to convince myself that we weren't going to be ending up at the coast! I have done so many night rides to the coast with Geoff I have lost count. It was great to see him again after what seems like ages since we did this sort of thing. I did miss David, Anne, Andrew and Mark. 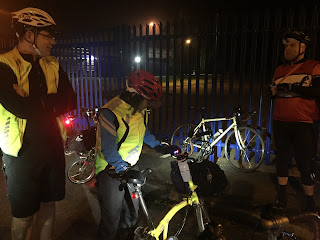 We stopped at the strangest locations and Kevin started to let it be known that the dreaded Chinnor Hill was looming. He told as that on a previous ride, one participant was set upon by an errant badger! Yes you read correctly...a badger!! With a lingering fear at the back of my mind we carried on towards what must surely be one of the most terrifying ascents ever! 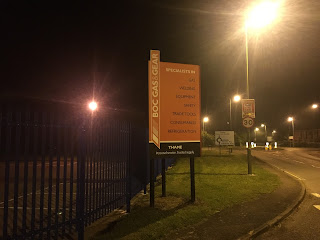 Chinnor Hill is about a mile long with an average 7-8% gradient. It maxes out at 15% and has more than a few turns to keep one interested.

I had finally changed my granny 44t chainring back to the standard 50t. I bought my P-type with the 44t as I wanted a pure tourer. Having it on for over a year I hated it as I just kept spinning and didn't ascend hills fast enough. Despite this I wondered whether this jump might cause some problems on such a hill?

Chinnor Hill I have to say is quite a hill and was not easy. I enjoyed the challenge and loved my 50t - I had made the right decision. We were told to turn left at a little grassy island and three of us waited by the Hill Top Lane sign for the others.

After a little while I had a call from Geoff who said that they were waiting for us at the grassy island and that it was suspected we had gone the wrong way. I am not certain but I think Zoom Zoom had something to do with this? Heading back down we saw everyone and discovered we had not gone wrong. A slight misunderstanding but it meant that we had to ascend quite a steep section of Chinnor Hill all over again! 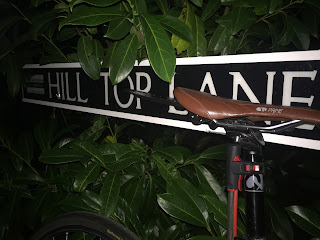 The descent that followed a few miles further on to West Wycombe was quite magical. I am sure that the child in us all wanted to shout out 'weeeeeeeee!' as we coasted down at speed for what seemed like ages.

Our stop off point was Beaconsfield Services and after negotiating a wrong turn we headed in it general direction and soon found ourselves in sanctuary. There was a McDonald's open and it felt quite surreal to be consuming a burger and fries at 04:30 in the a.m. However, it was consumed with some enthusiasm.

Just over 30 minutes later we emerged from Beaconsfield Services and usually I find that I am rather cold for a few miles. This time I felt find and carried on without much thought about it. 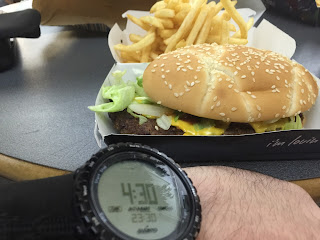 Soon we were approaching the outskirts of Harefield and not too long thereafter I said my goodbyes. I had a few more miles to go but was always going to finished the ride around this point.

This was a brilliant ride. The company, route and weather was excellent. Many thanks to Kevin and I only hope that he is able to repeat the exact same ride again in the future.