Those of you of a certain age who liked watching rugby, on the BBC a few years ago before things got all professional might remember seeing footage of how England, Irish, Scottish, Welsh and French rugby players got ready for one of the Five Nations matches. You might recall seeing short montage-films of players in the week before the big match in their normal 9 to 5 job. The jobs were varied - doctor, solicitor, builder, gas worker, bank clerk - but they all showed people fitting in their weekend activity together with a busy job. Thoughts of the weekend did naturally dominate. In many ways, a Friday night ride to the coast is a little like this!

After prepping the bike - again my new Orange Brompton - I headed off from my base location in Maida Vale - far too early if anything. This meant that I got to the meeting point near the National Theatre early. I then decided to amble along the Thames, Cross the Thames at The Millennium Bridge and then amble back to where I started.


At the back of the Tata Modern I took a few photos of my bike and you will be please to know that I have only included two of the ridiculously large amount I took during this time wasting exercise.

When cycling back along the Southbank from the Tate Modern to the Royal Festival Hall, there was the usual sight (and sound) of couples have arguments and/or breaking up. Friday night and that stretch of there Thames must be the place to do it! 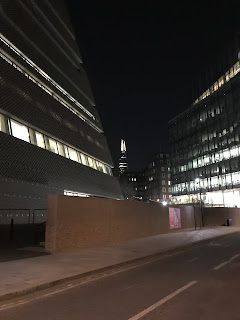 When I returned to the National Theatre I saw that Geoff was there (again on big wheels) but sadly Dr John couldn't make it being under the weather. Charlie (who I will come back to later on) was also there, this time on his road bike and was to do a fine job of organising way markers. 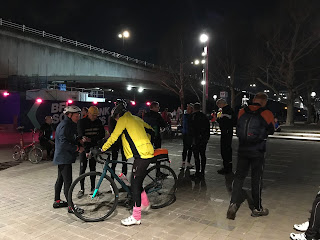 After our safety talk by ride leader, Rob we were told to check over our bikes and get ourselves ready as we would be going in five minutes.

Considering the recent weather we were very lucky. It was a mild night and the rain - a constant companion it seems for the last few days - stayed away for much of the ride.

The pace was good and with very few stops for mechanical or punctures we arrived at Greenwich quite quickly - or at least it felt like that. 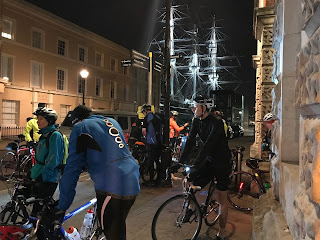 Further on in our nocturnal adventure we arrived at an underpass. This was a place where one could powder ones nose as it were. We get to see the nicest of locations.


The ride was proceeding very well with Rob leading the way, Charlie instructing people to mark corners up front with Rob and a team of Tail End Charlies who brought up the rear. A special mention to Stuart who seemed to mark loads of junctions, wait for the tail to catch up and then be seen near the front again.

Near Gravesend we stopped at a bus stop with lots of seats to wait for the tail to catch up. Naturally seeing the tin man opposite was a photo opportunity not to be missed - my excuse having a new bicycle to photo! 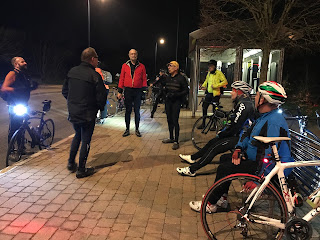 Another short stop at a location we always seem to stop at (including in the days when the gentleman that is Simon ran these rides) was a pub once called 'The Call Boy.' It is no longer called that however the sign still remains. 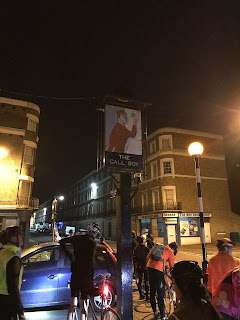 With the halfway stop not too far away the pace at the front seemed to quicken ever so slightly. It was still a mild night/morning but every so often the temperature seemed to drop dramatically only to recover a few hundred metres on. 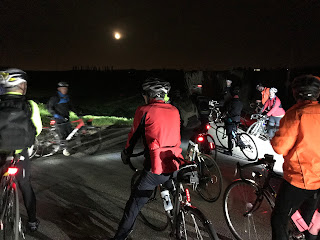 It was a joyous moment when we arrived at the Church of the English Martyrs in Strood. For the bargain price of £5 you could partake in a couple of tasty rolls and a slice of even tastier homemade cakes!

Getting up to make this all happen was Tim (ride leader on a number of other Fridays rides) and his wife. The funds raised for this went to a charity that is run within the church called 'Step and Learn.' https://www.stepandlearn.org Click on the link to find out more and perhaps if you have a spare £, $ or € you might consider donating. We were told later that we raised over £300 which is very good. 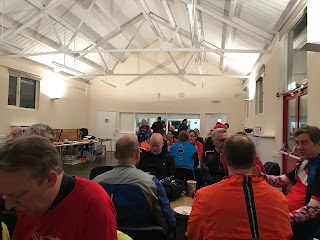 Not a great deal of talking was done as I have to confess to almost nodding off on several occasions!
We left the comfort of the Church and stepped out into what is nearly always a little chiller conditions. As such I put on a light layer and headed off. After a few minutes I was fine again and wanting the opportunity to take that layer off. 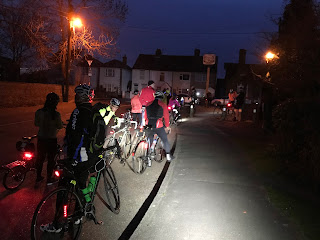 With dawn approaching the sun starting to rise and before you knew it the semi-darkness had given way to morning. It started to rain but it was very light and didn't materialise into anything more concerning.

Arriving at Faversham we were told of the last turn. At this point those who wished could travel at whatever speed they could muster towards the finish at the 'Waterfront' where breakfast awaited. 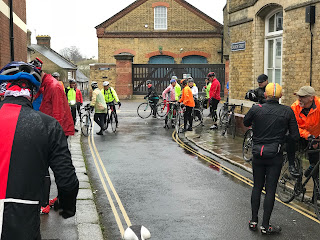 At the turn there was at times quite a headwind but thankfully nothing too bad and certainly not as bad as experienced on previous incarnations of this ride. I managed to pass a few people and then stuck behind two others and was to do this - getting a little tow - all the way to the end.

I completed the Graveney to Whitstable 4.3 mile STRAVA segment in 17 minutes 10 seconds at an average of 15.2 mph. Not too bad but certainly not my best.  As I arrived I saw Geoff who was locking up his bike. I folded mine and headed inside.


When the lady at the counter asked my name for the purposes of my order (which someone would bring out and shout out your name) I said, 'Orange.' She questioned this and I repeated. Not long after my breakfast arrived and the penny dropped when it was brought over to me and they saw an Orange Brompton.

Saying our goodbyes we headed for Whitstable station but before that I had to take a photo of my new steed by the seaside! 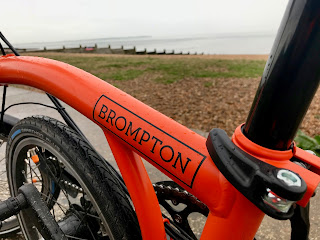 Geoff was going to try clock up another 100 miles by cycling part of the way home but decided to take the train as far as Gravesend. Our train arrived in good time and what a journey it proved to be!

A few stations in the train was becoming packed. When Geoff got off at Gravesend, saying goodbye I also asked him to wish me luck! At the next stop it was as if every person trying to get on was carrying a large suitcase! I was so glad I brought my Brompton! If I had of been on my Condor road bike I suspect I may have suffered some sort of seizure by the time we reached St Pancras!

The journey - we should not have got on the front carriage at Whitstable - was horrid and like the late Pope John Paul II I almost kissed the platform floor, so glad was I to have arrived. The tube station I was going to use was packed so I decided to simply cycle home.


This was another great ride. Again riding through the night is quite addictive and hopefully I will be able to go on many more of the others planned for 2018. Many thanks to Geoff for his company (and support on the train home), Rob for leading the ride, Charlie for acting as Waypoint Administrator and the team of TECs. Until next time...