This morning I was rather pleased to have the opportunity to get some birds eye views of London. The one thing I was not so pleased about was having to cycle on my beloved P-type Brompton to an underground station and get the tube.

The journey was hellish. If you have read my blog, you will already know I hate the tube - mainly as I am not too good if the tube gets really busy. I remarked that the standard to attire for the city gentleman has slackened somewhat since I had to endure the square mile when I worked there well over 20 years ago. The order of the day was shiny and skinny suits that rendered the wearer an estate agent look.

Where I was going my Brompton was not allowed and not wanting to do the crazy thing of locking it up somewhere, I asked a favour of an old friend who lives in Barbican whether I could leave my Brompton there until I returned. Thankfully he agreed.

The first building I always try and take a few photos of is 30, St Mary Axe - commonly known as the Gherkin. This iconic building is where some of my fellow Bromptonians go for a meal now and then. The architects were Foster and Partners and even though it was opened in 2004 it still remains fresh to my eyes. 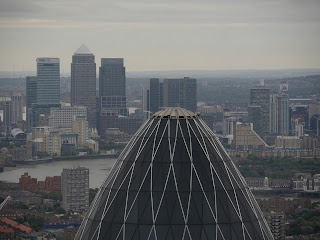 Looking towards St. Paul's Cathedral I could just about see some tourists on the outside of the dome getting a different but equally impressive view of London.


Lots more people were getting good views from 20 Fenchurch Street or The Walkie-talkie as it is commonly known.


You can gain access to its Sky Garden for free by booking a ticket in advance. Well worth doing and I aim to do so after dark at some point in the future. 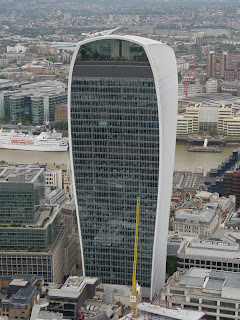 The BT Tower, a building completed in 1964 used to have a restaurant that rotated. Sadly this is no longer open to the public and plans to open its rotating restaurant - although being muted a few times - has not come to anything. A shame really. 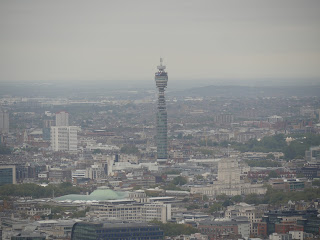 The Shard, the tallest building in the UK and fourth tallest in Europe dominates the London skyline for miles. There is paid public access to the viewing platform for around £30. I did this not long after it opened to the public and found the whole thing a little bit theme park. In addition, despite my best efforts, I still don't really like it and for reasons I cannot explain just regard it as tacky. 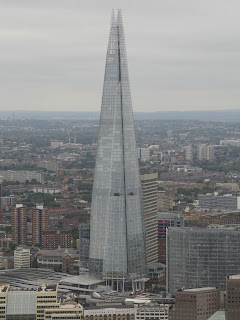 After a few hours of happy viewing and many more photos than I dare to include on this blog, it was time to leave. I retrieved my Brompton from my friends abode and knew that I had to take the tube for at least part of my journey back.

The joy of having a Brompton is that when things get too busy for me, I simply get off and cycle the rest. It is one of the best things about owning one. I cannot tell you how many times I have done this or decided that things are too busy and just cycled the long way home.