The First Ever All Brompton Night Ride from London to Southend

Friday night was going to be a very special time for a few Bromptonians as it represented our first Brompton Friday night ride to the coast and in this case Southend.

Over the years I have grown to love Friday night rides to the coast and had been looking forward to this particular ride all week. I had diligently kept an eye on the weather situation (a bit of an English pastime anyway) and made sure I was going to be ready for the long night ahead.

The meeting location was the all too familiar Hyde Park Corner. It was originally posted for Charring Cross but sentimental attachments to the Fridays rides induced me to ask David, our ride leader to change it, which he did.

Before meeting at Hyde Park Corner I could not help but do a lap of the Brompton World Championship circuit, which this year is going to be held in London. My lap was cut short mainly due to the huge volume of traffic and preparations for Anzac Day.

Meeting at Hyde Park Corner there were already a few of the brave and one by one they started to arrive for our nocturnal adventure. 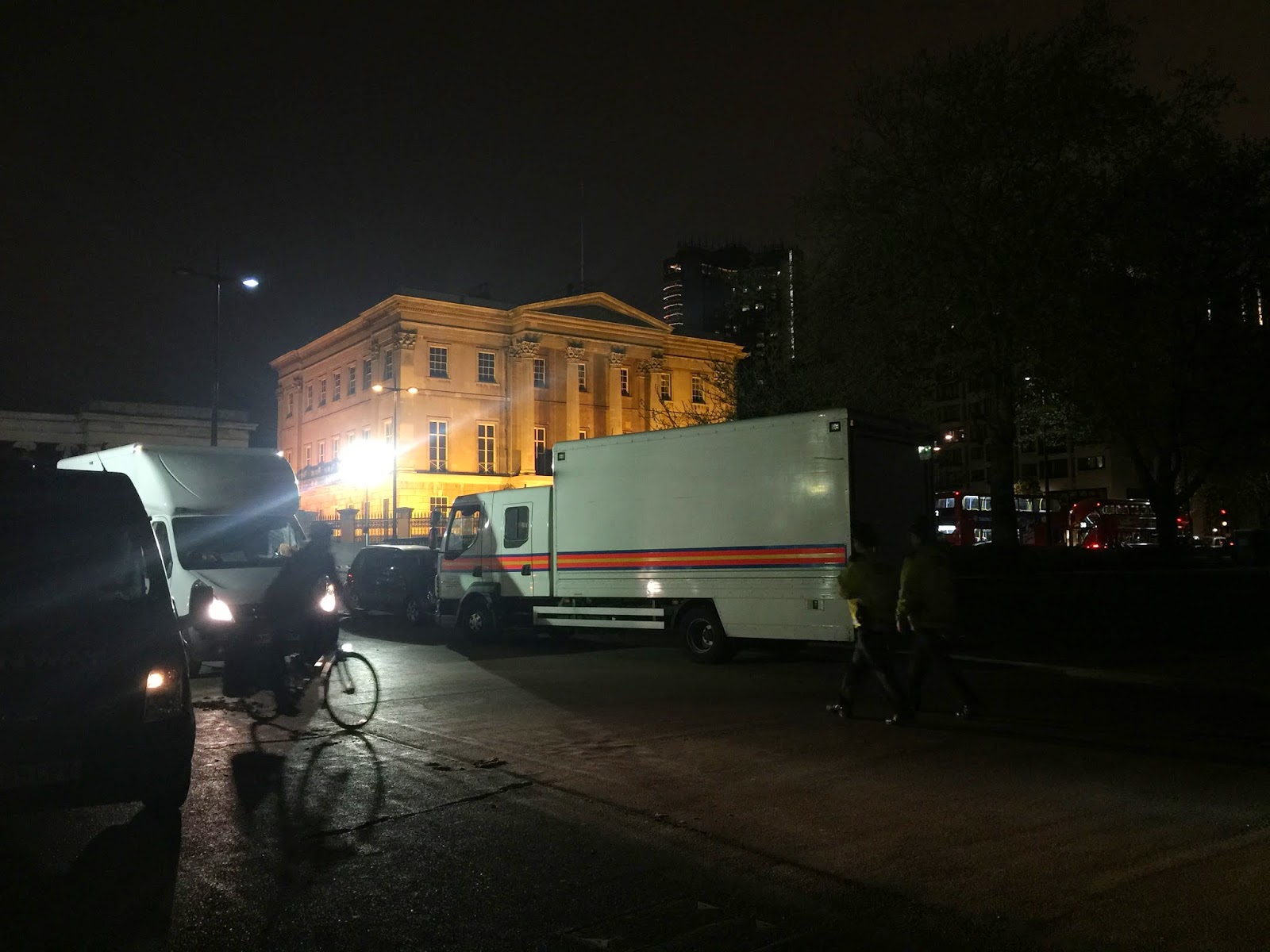 There was apparently an early morning service to be held near Wellington Arch which accounted for the police presence and others busying themselves with getting things just right. 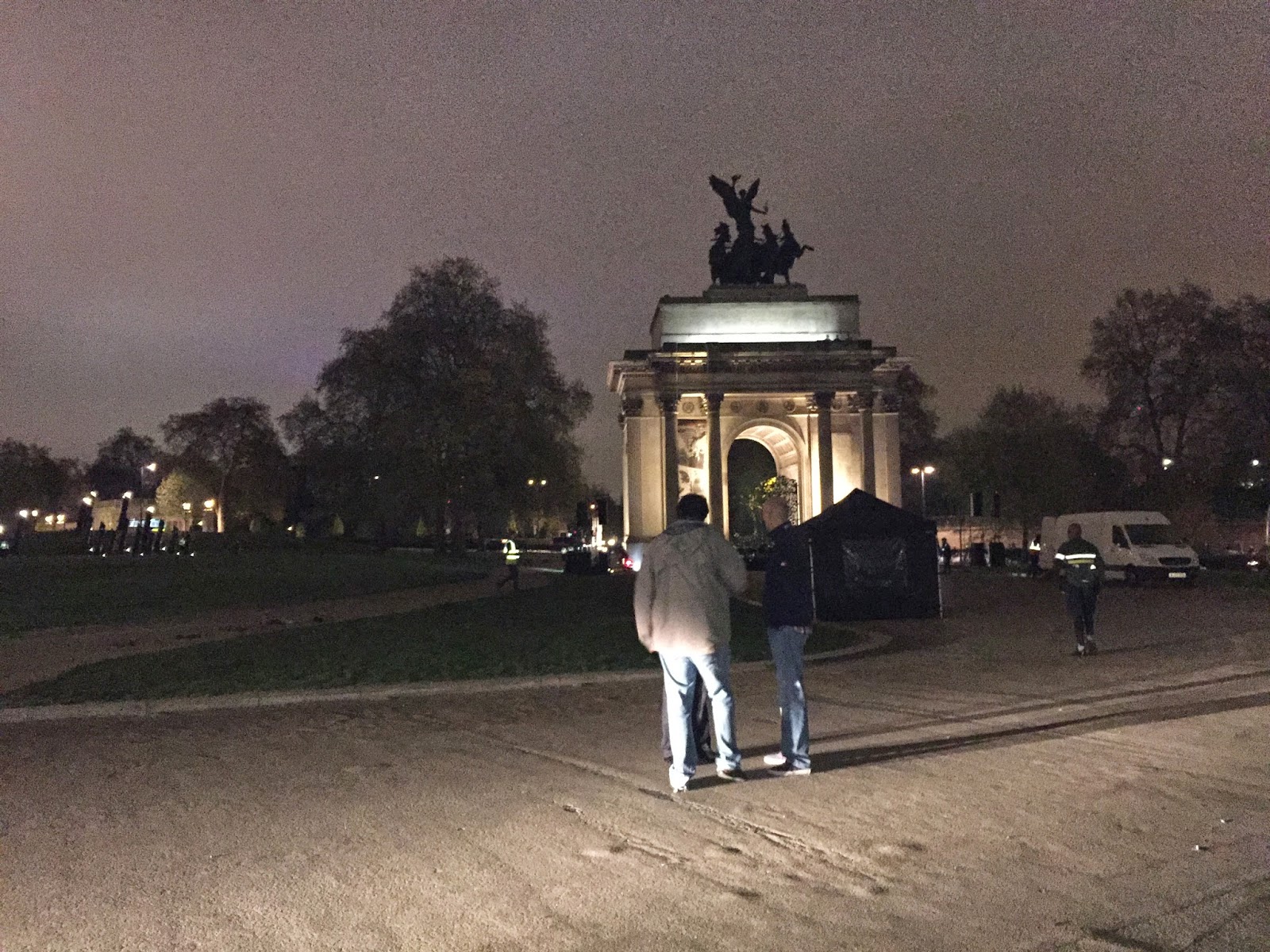 With all participants assembled, David gave a brief run-through of the ride and more or less on the stroke of midnight we were off and consumed by the night. 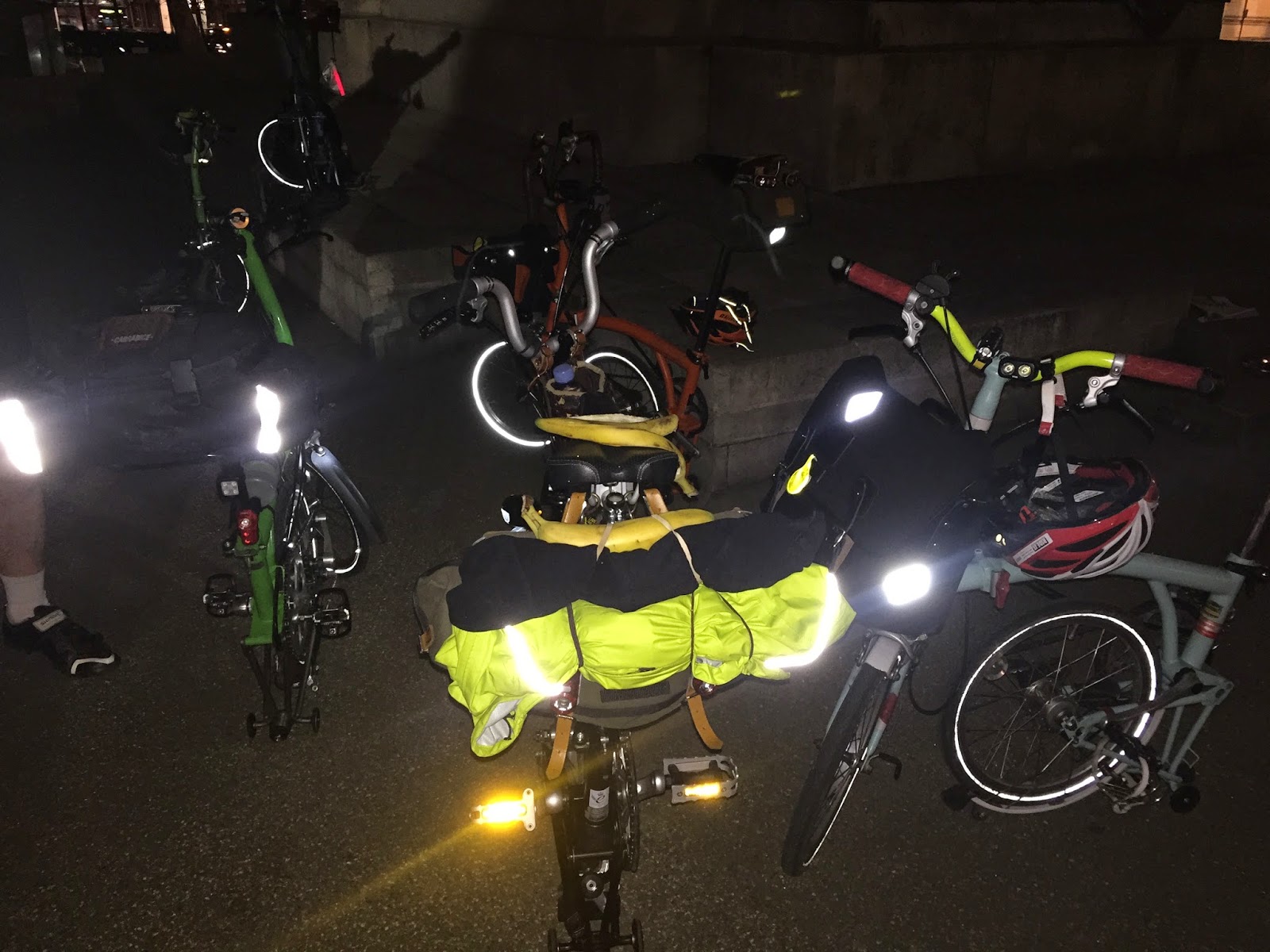 Geoff took the role of tail end Charlie and Mark and I hovered at the back too in order to catch up on gossip. It seemed like an age since the three of us had ridden together.

We made good progress, despite the fact the traffic was extremely busy in and around London. In what seemed like next to no time we had reached east London and the Excel building came into view. 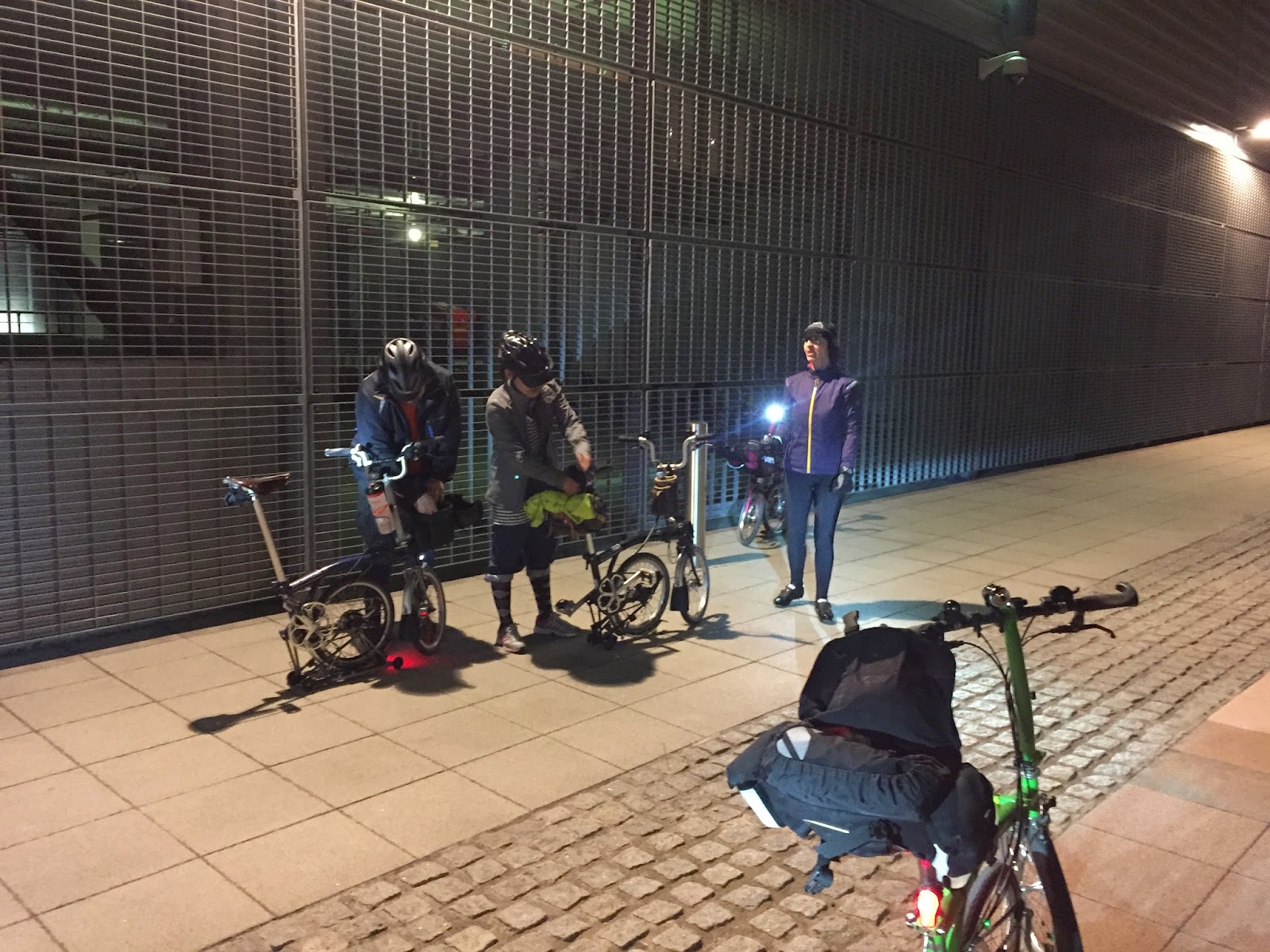 This represented our first stop to take on water, the odd snack and one of the jelly babies that Geoff always brings to one of these rides - and I have to say very much appreciated! 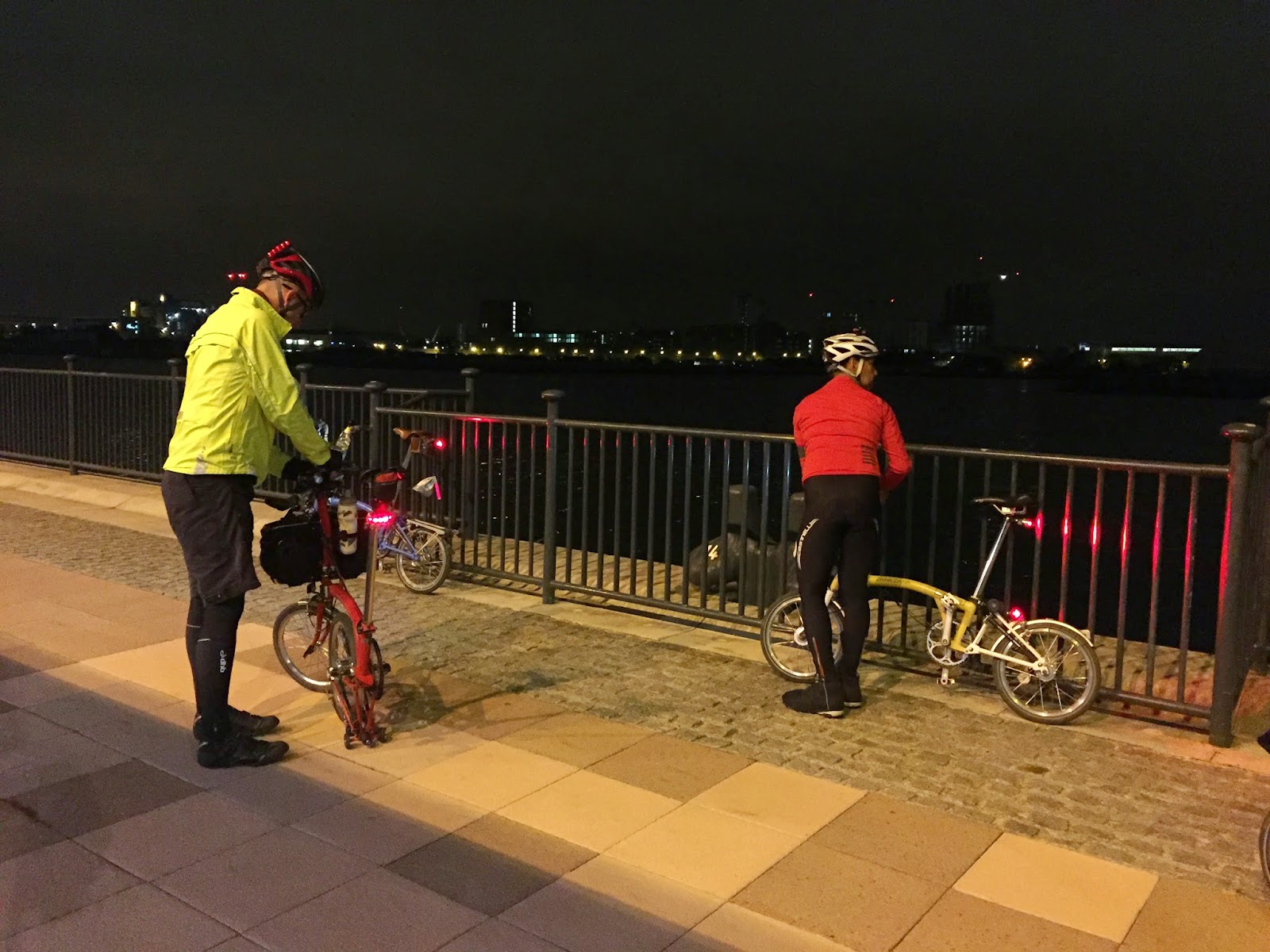 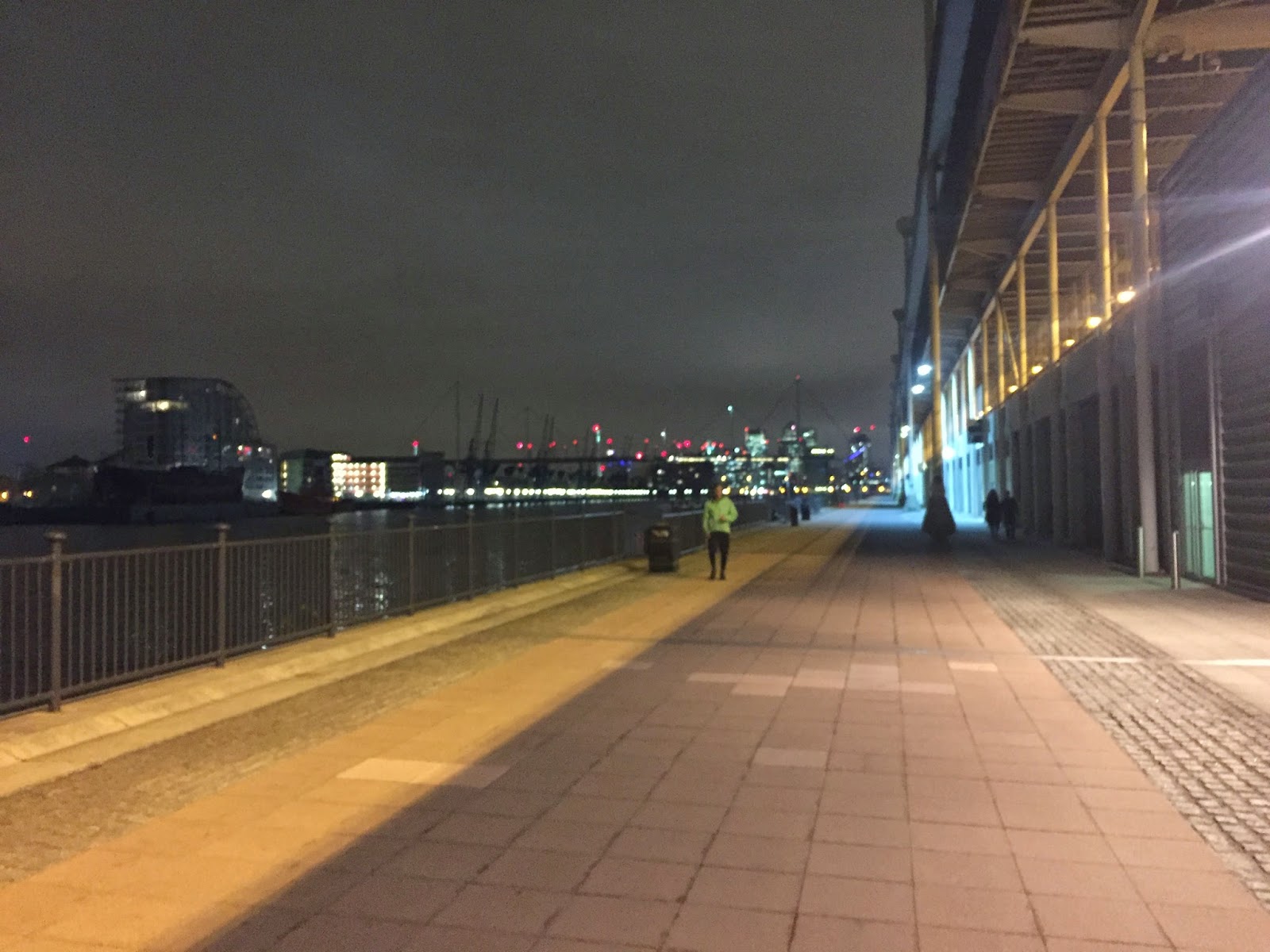 As always I had brought a flashing light to beef up my SON dynamo powered Edulux II light. In truth with this light one doesn't really need anything else as it produces a super bright and more importantly wide beam.

Our route chosen by David was as always interesting. As we skirted industrial estates booming music and the revving up of highly tuned car engines could be heard. With the burning of rubber, handbrake turns and donuts, it was all getting a too like ''Fast and the Furious' or 'Grand Theft Auto' for yours truly. Of course I didn't see any one perform any of these but I am pretty sure you could see the intent in their eyes! 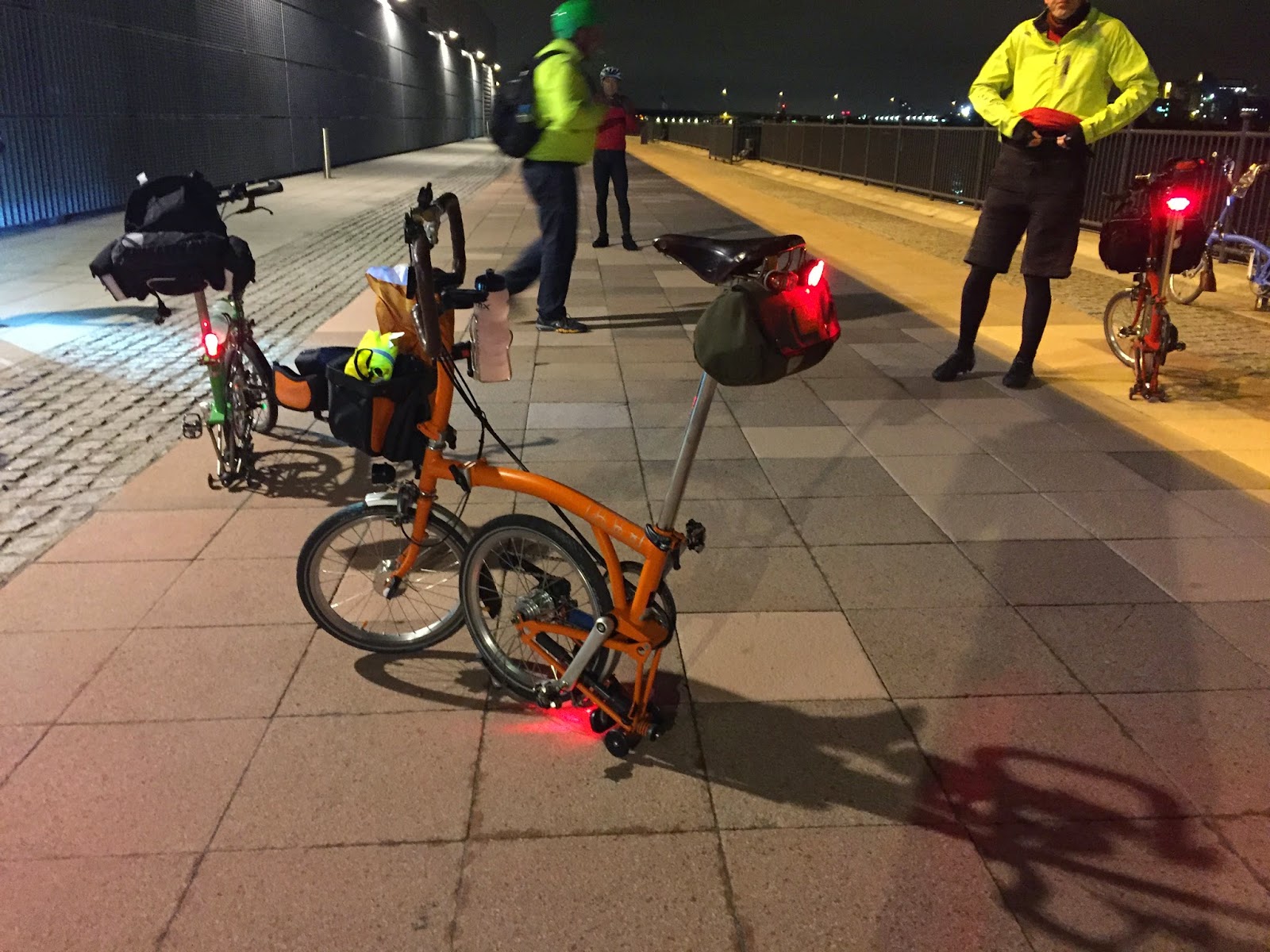 As we pressed on we reached one of the highlights of the journey, cycling through Rainham Marshes. Now an RSPB nature reserve covering over 400 hectares, is a former Ministry of Defence test firing range. 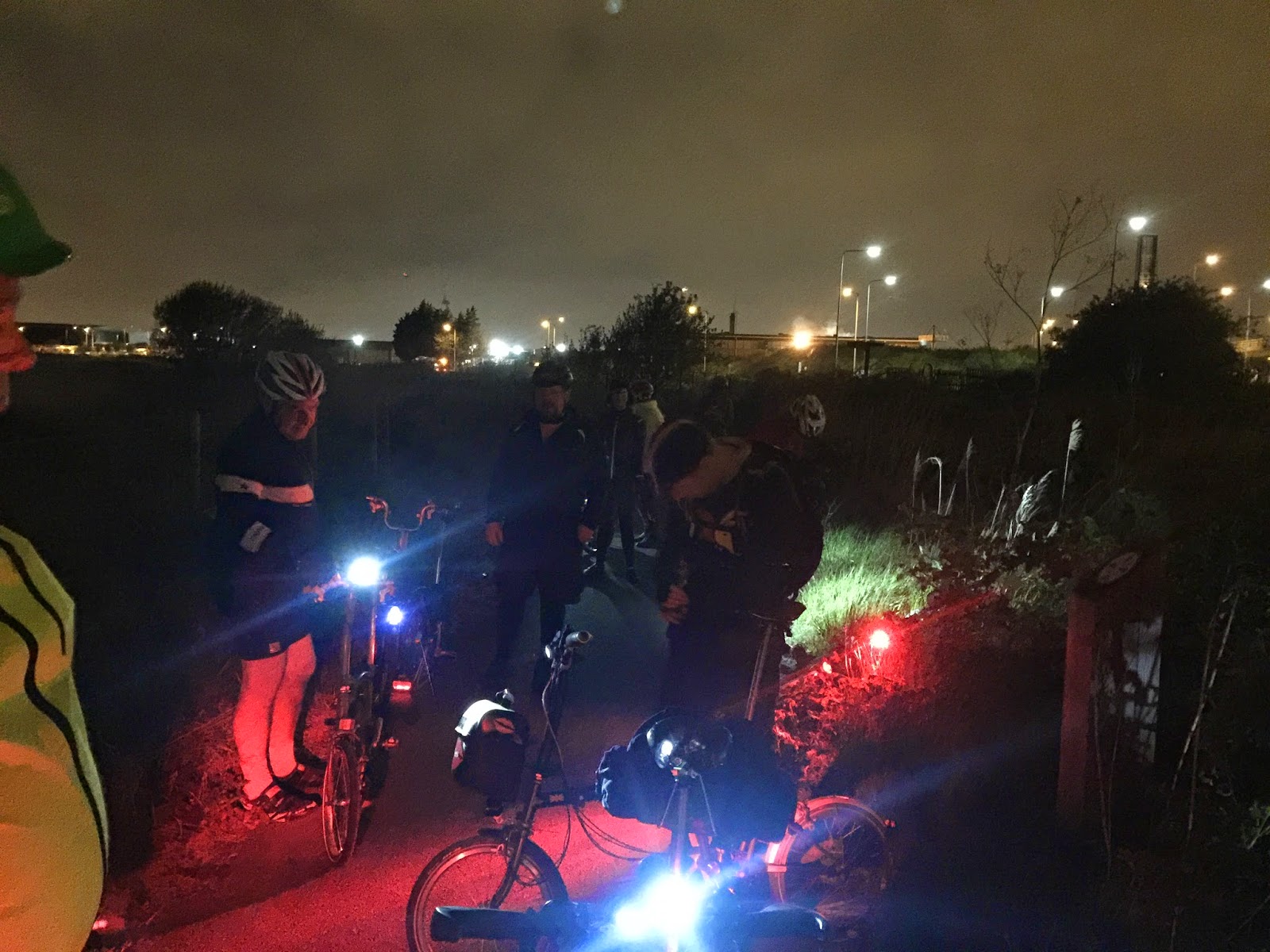 Cycling through the marshes was certainly an eerie experience and I am glad I had good lights and the safety of numbers. 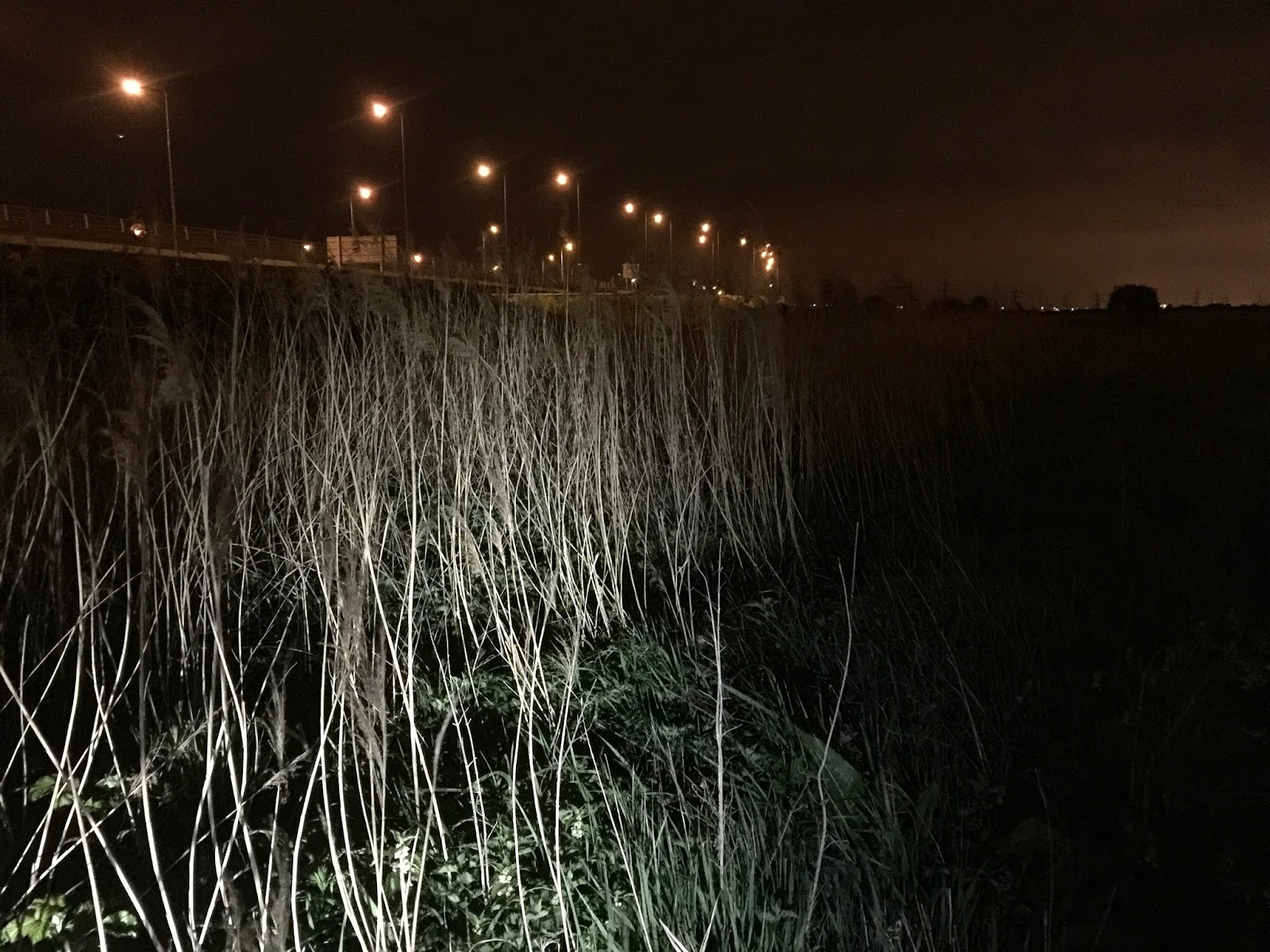 The night really does play strange tricks on the mind and at any moment I fancied a werwolf, vampire, ghost, wild animal or worse still one of the locals, might come out of the reeds. Thankfully only the sounds of Reed and Sedge Warblers could be heard, angrily singing their disapproval at several Bromptonians happily cycling through their territory.

Cycling through Rainham Marshes at this time was a highlight and the RSPB reserve buildings looked wonderful in the half light of our various lights. 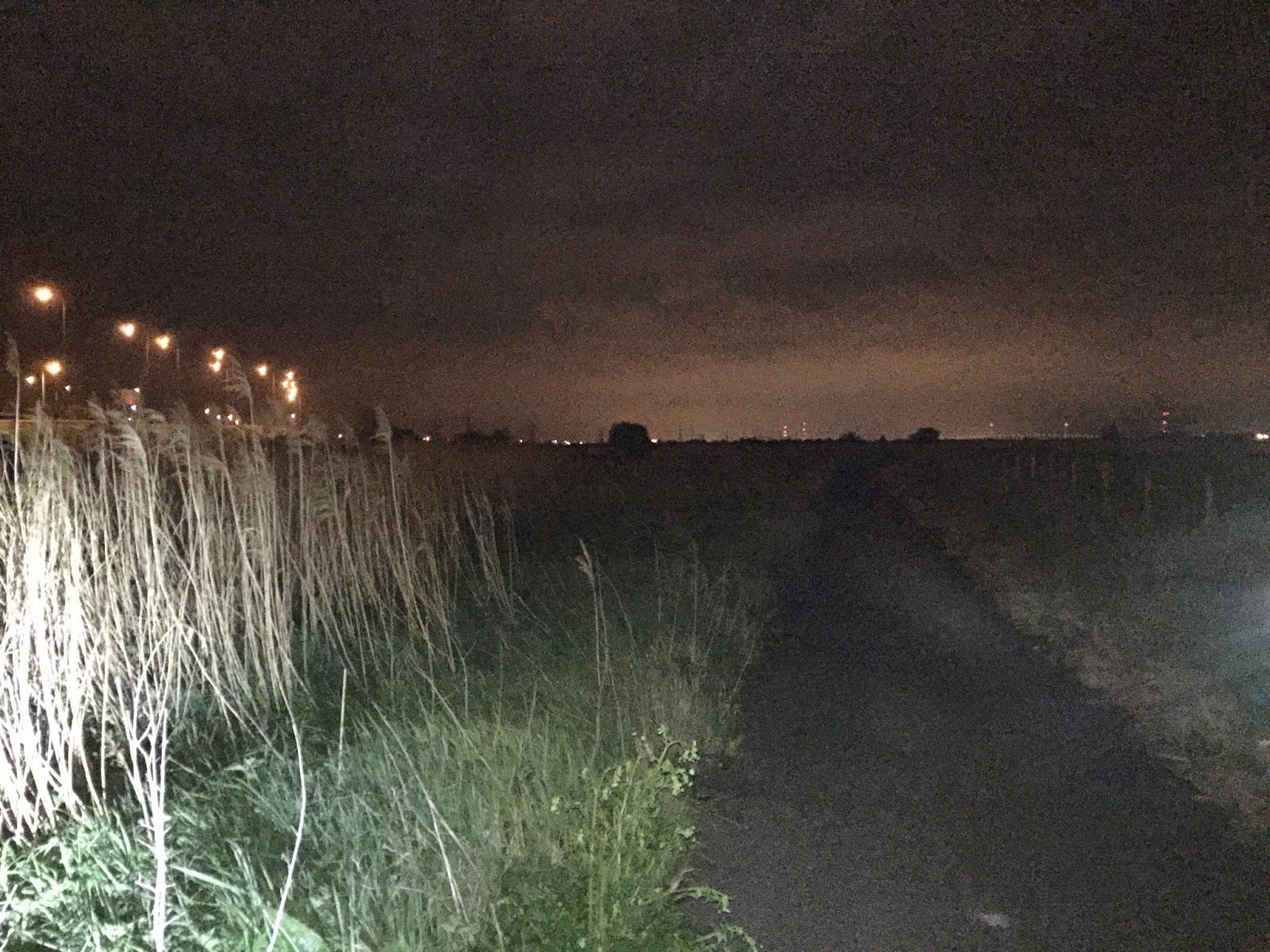 Just before 03:00 we Thurrock Services, a 24 hour motorway service station where we would be able to sit, relax and take onboard some refreshment. Outside it had been raining steadily but was so fine a rain I didn't really bother with any waterproof jackets. 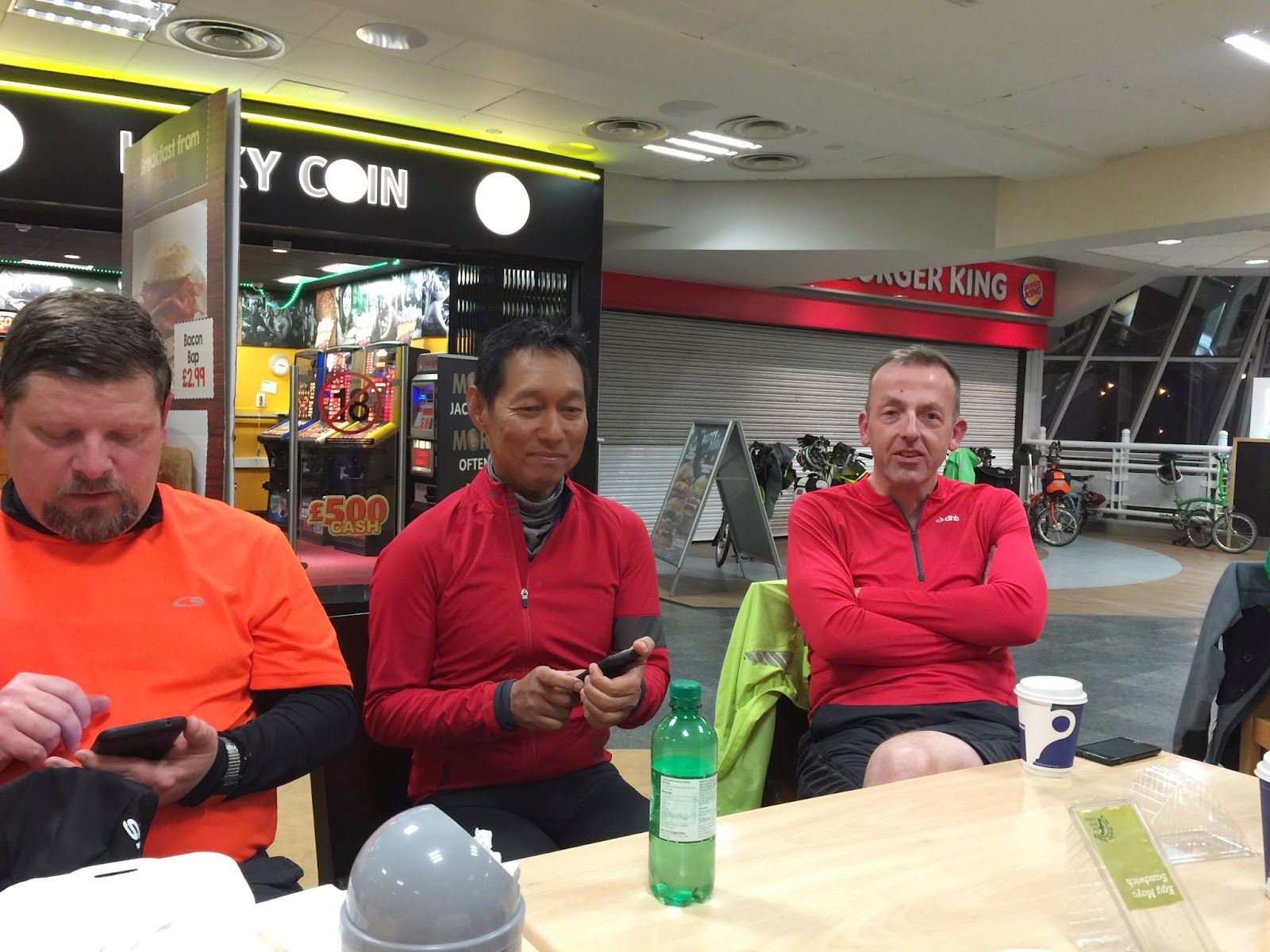 Parking our Brompton bicycles up we retired to the seating area and pretty much had the entire services to ourselves. I recall on a previous ride to Southend arriving at this very spot much later that we had, so David's route was a pretty good one. 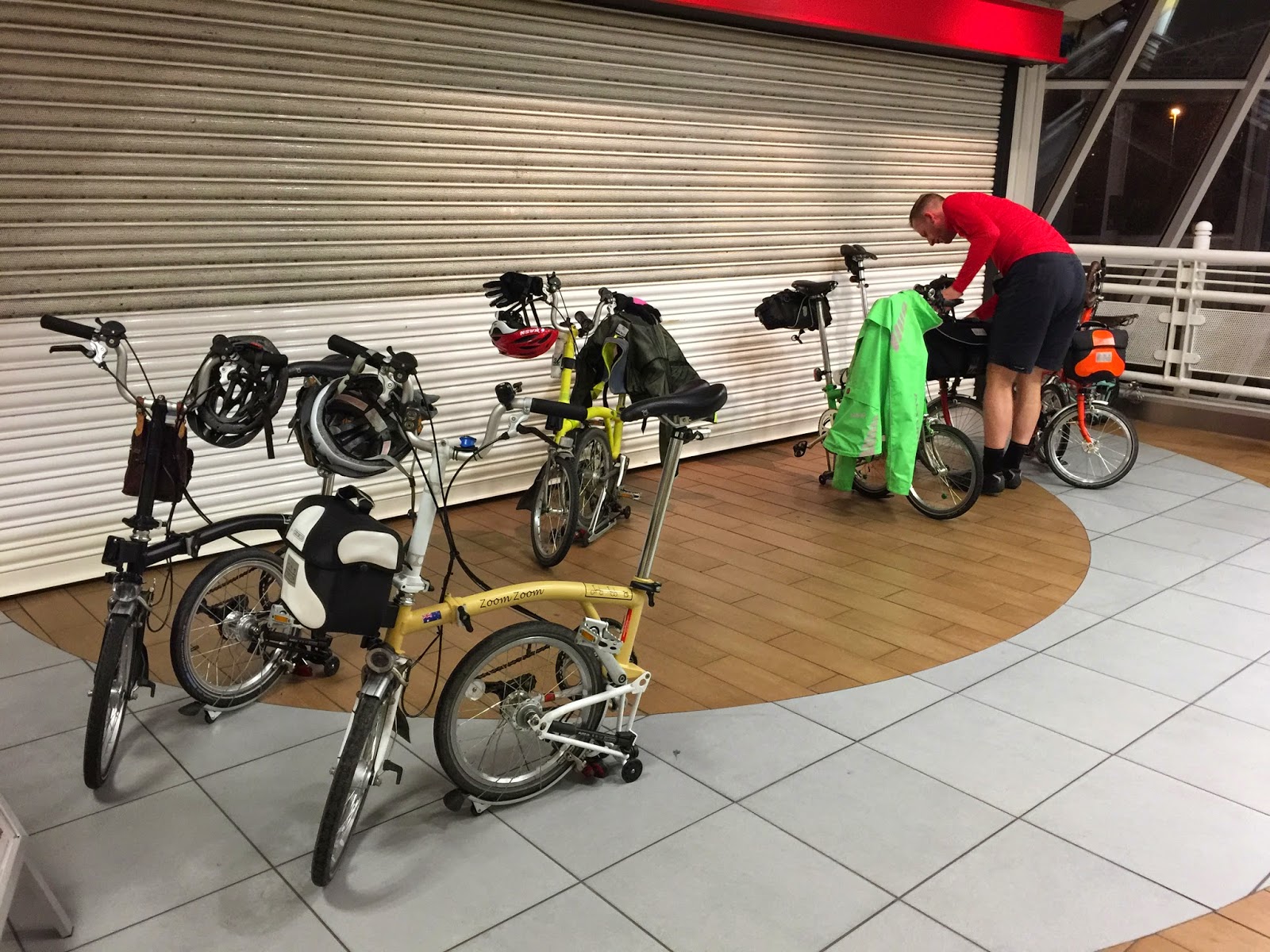 With a  good few miles still ahead and with our rest done we headed out into the darkness about an hour later. As always is the case for a few miles I feel cold and was grateful for the light waterproof jacket I had decided to wear until I felt warm again. Sure enough, after less than ten minutes I took it off. There was considerable drama ahead of us however... 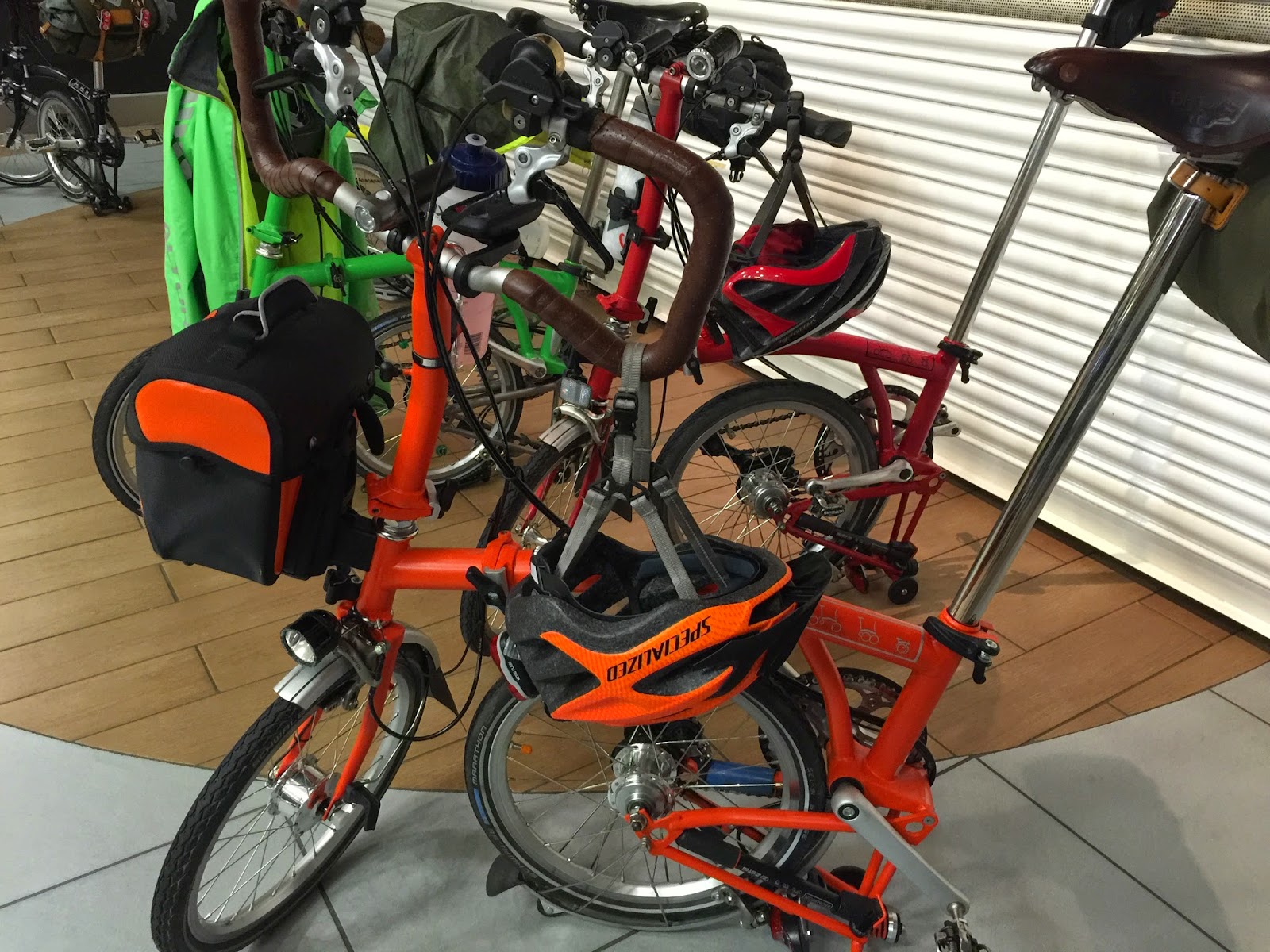 A strange and unfamiliar sound was coming from the rear of Brian's wheel. At first we thought it was a loose mudguard rubbing against the wheel but it was something more. A few miles further and his rear wheel looked as if it was wobbling and slightly out of alinement.

Brian stoically soldiered on without making any fuss but it was soon realised that after hitting a pot hole a spoke or perhaps several had come lose, resulting in the wheel being compromised. We had reached roughly 45 miles with only 15 or so to go when a spoke must have gone through and burst the tyre in what was by all accounts an explosion. For Brian the ride from London to Southend was over.

Luckily (although it may not have seemed this to Brian) we were about 2 miles from a train station. We left Brian with good wishes and a lonely walk to said station. Brian was unflappable, in good humour and after a cigarette was off. The wheel I am sure can be repaired and Brian will live to fight another day. I really hope that we can repeat this ride so that Brian can get some revenge.

The rest of us pressed on as dawn approached. At one point along a wooded area Sam shouted out 'look!' I looked around and though it might have been a white stag or similar but it turned out to be a bluebell wood. Still impressive though.

Sadly, Anne ended up going home early too as her knee which has been giving her problems for several weeks must have started to let her know that it was time to stop. We said our goodbyes but it was sad that Anne could not have competed the ride as she is excellent company.

With the back of the ride broken and the sea spotted we knew that we had done it. Southend could be seen in the distance. At this point Geoff kindly gave me a stick of Southend Rock as a souvenir of our  Brompton adventure. 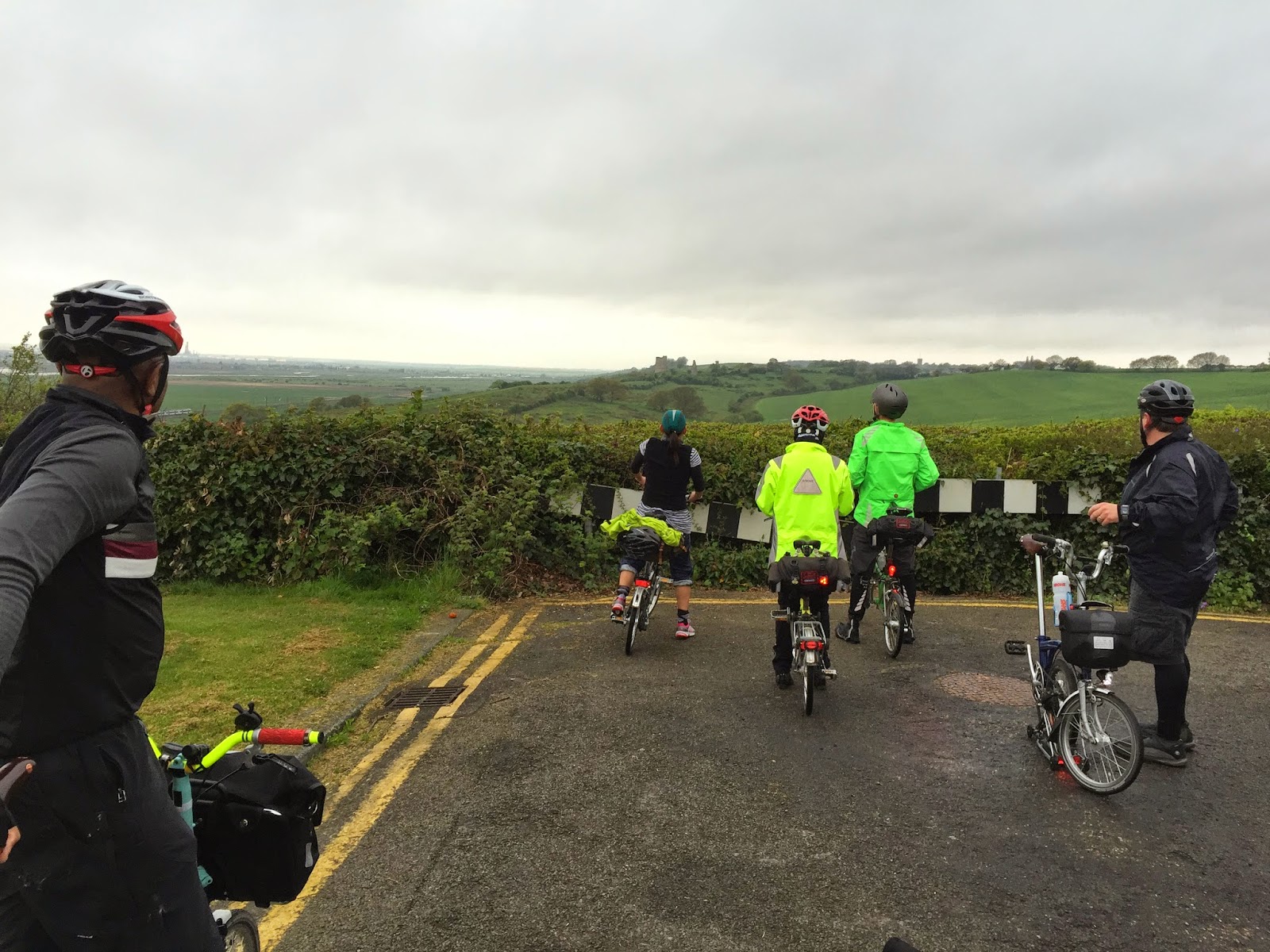 We stopped to take a few photos which consisted of the Brompton being the main focus! The others were going to get a well earned breakfast but I wanted to head straight back to London, so I said goodbye to the others. 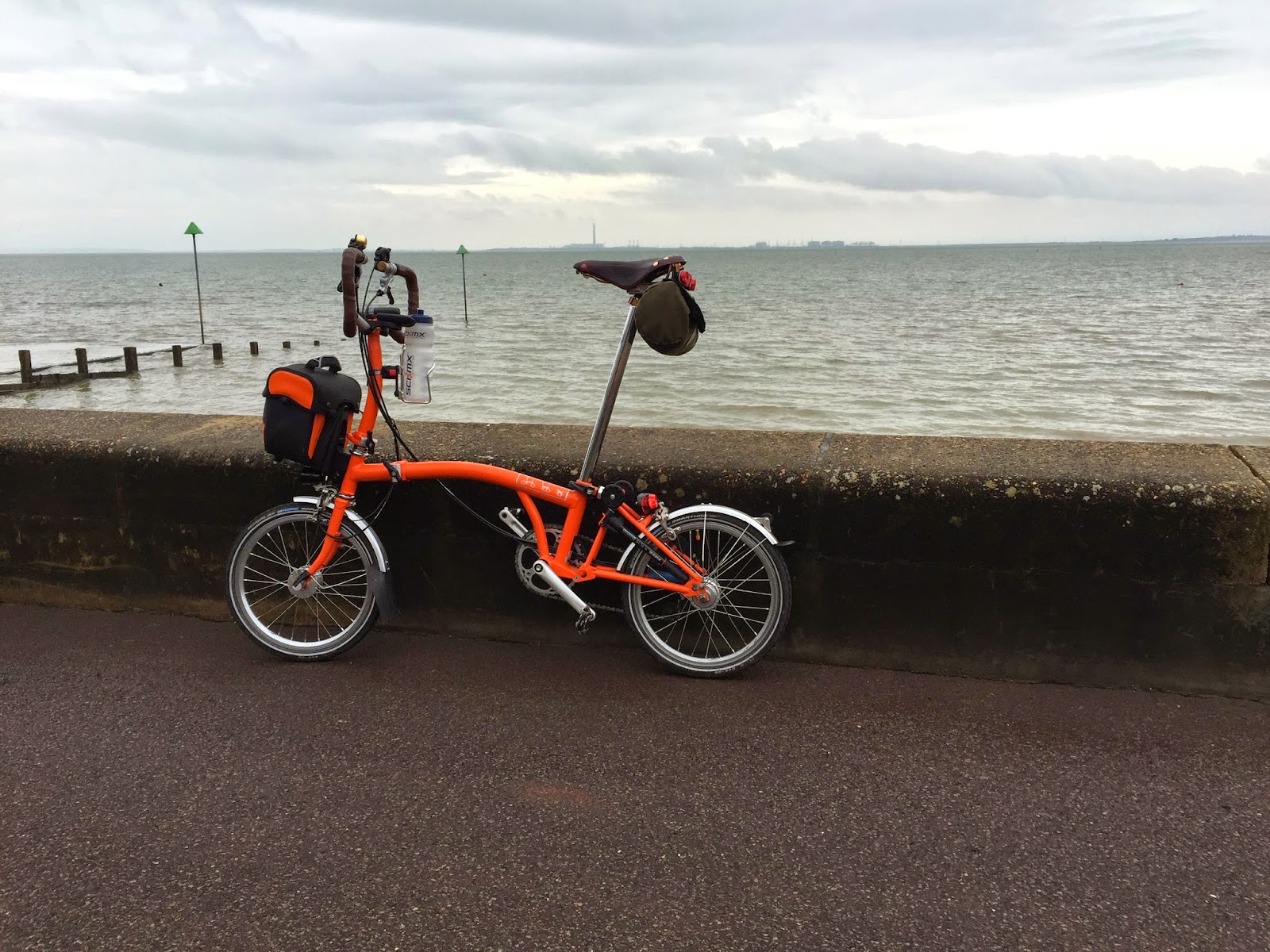 Tony joined me and with only a few minutes to spare we managed to catcher the next train back to Fenchurch Street Station. 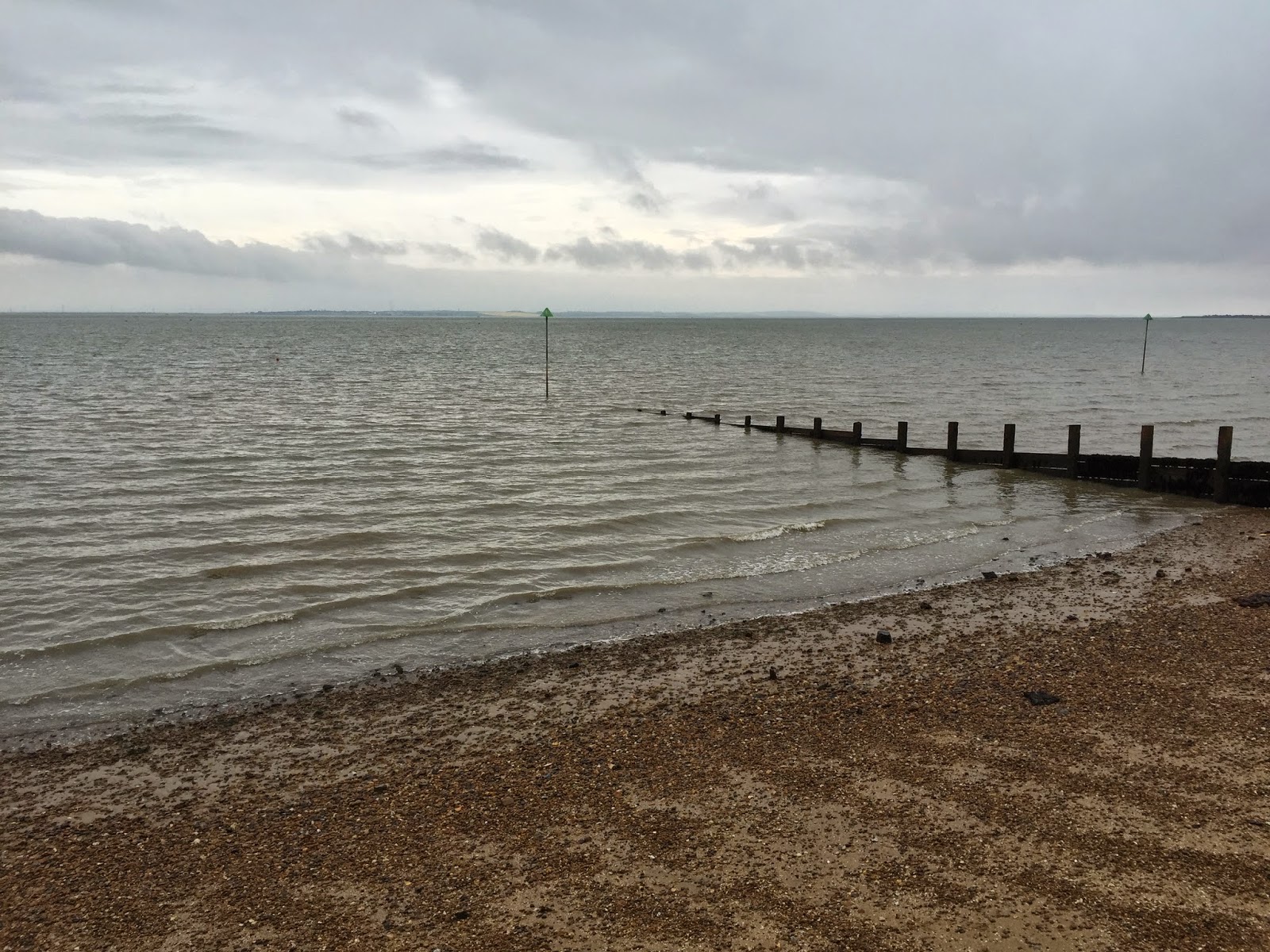 The journey took about 55 minutes and as the countryside flew past my window, I could not help but to look out and take stock of what we had all just done.  This was the first all Brompton Friday night ride to the seaside and it went very well. I certainly gives hope that we can repeat and perhaps cycle to other seaside destination.

I remember saying to Zoom Zoom at Hyde Park Corner before we left London that night rides of this nature are special, addictive even and after completing this ride I was left with the feeling of wanting to do it all again. For me this was a brilliant adventure. As for what Zoom Zoom felt about his first ride of this type, I will let you know. 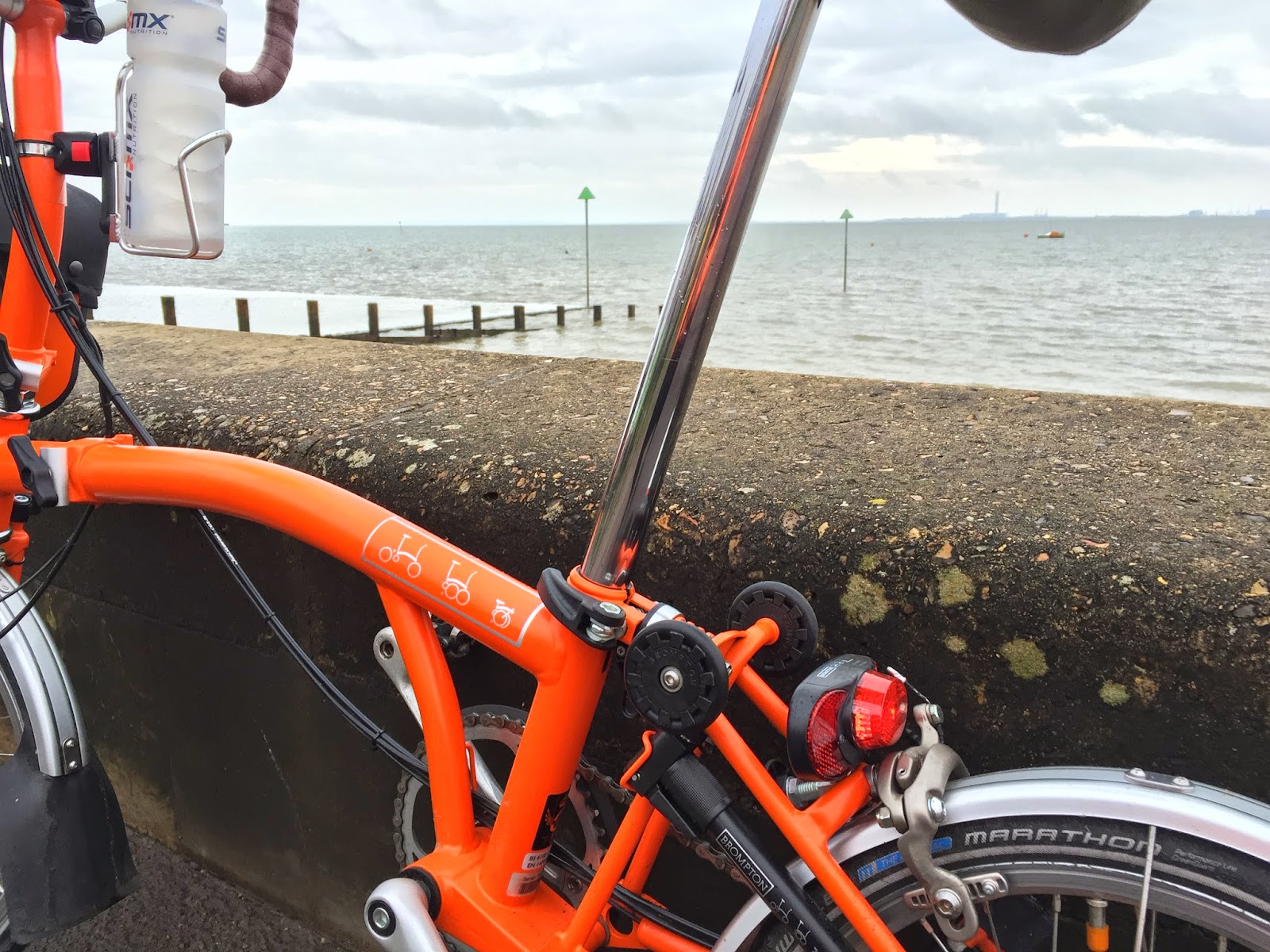 As I type this my stick of Southend rock is sitting in front of me and I am pretty sure I will do it again. When I got home on Saturday I had a couple of hours sleep and felt pretty good. A day later I feel fine - after cycling over 70 miles if you take into account the milage to and from the ride itself.

A big thank you to all the crazy types on Brompton bikes who came out for this ride, Mark and Geoff for the chats/company at the back and for David who provided a great little route and safety navigated all the way. Map and ride data can be viewed via the link below. 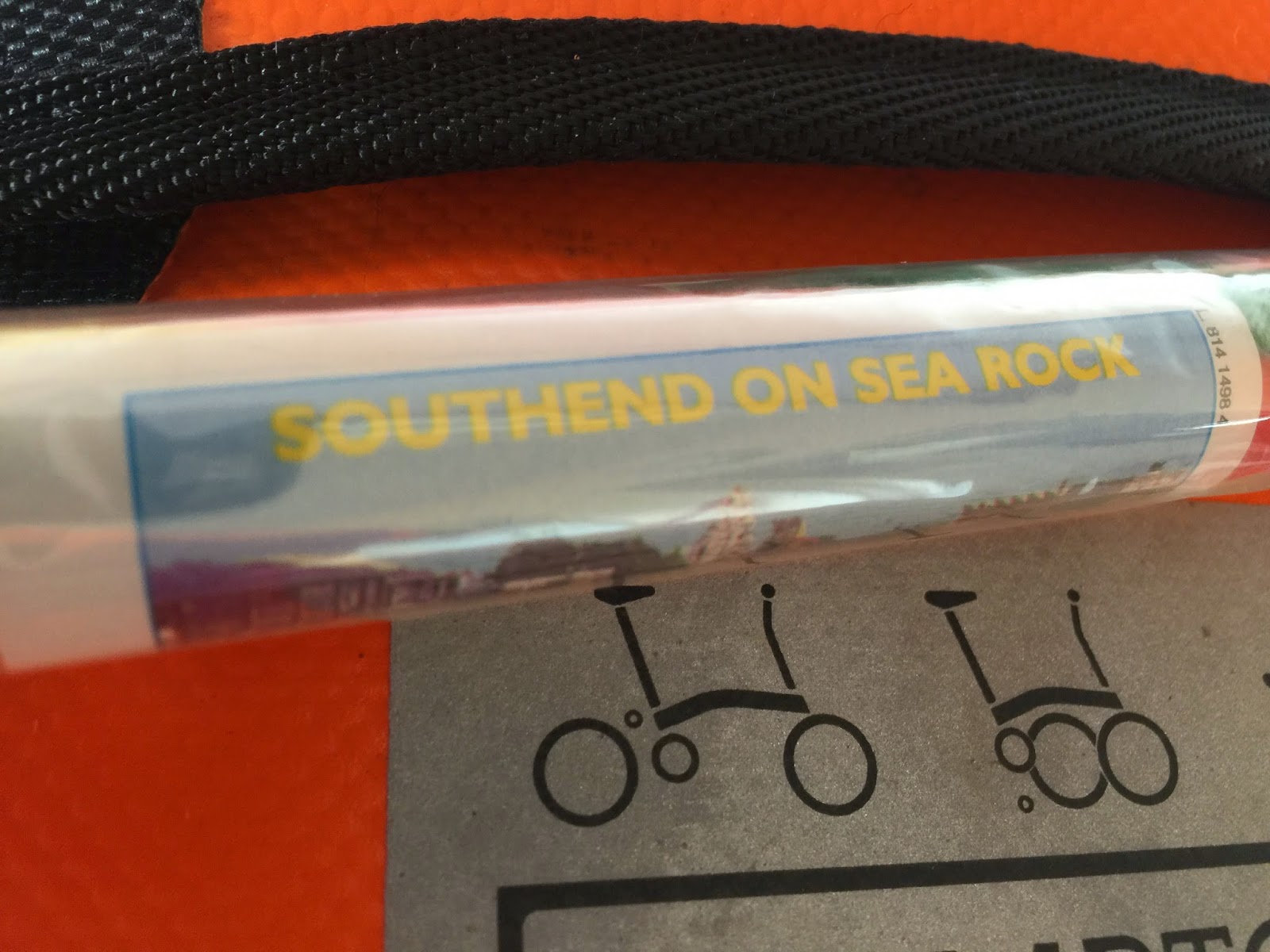