Early Morning in London on a Brompton.

For some strange reason I had the urge to get up at an ungodly hour this morning and head out with my Brompton and camera and take a few shots. I didn't have any plan of action and simply cycled where I fancied and stopped for the odd photo or two.

I started off going round Trafalgar Square and headed towards St Paul's. The Millennium Bridge beckoned and even though it clearly said riders to dismount, as no one else was around I rode towards the middle.
In the distance I took note of, 'The Shard.' This will be a striking building when completed and I will definitely return to photograph it.
The new telescopic seat pillar is still wonderful to ride with. That extra reach really does make all the difference and provides a very comfortable ride. 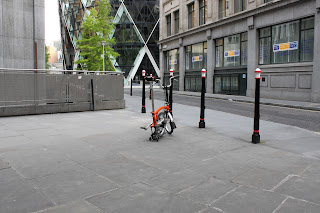 Heading into the City I stopped to take a few shots of some of my old haunts. I used to work up here but I am glad to be out of this particular rat race. It always amazes me how devoid of people this location is at the weekend. This time tomorrow morning it will be full with people moving around purposefully like ants. 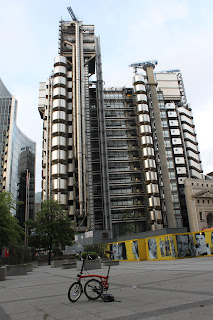 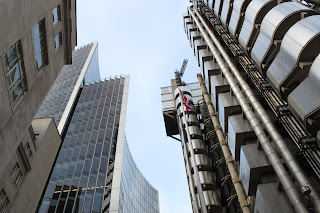 I made my return and stopped here in this narrow alleyway to think about where to go next. I wouldn't like to be here after dark as even in daylight there was definitely an atmosphere. 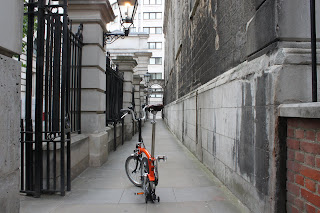 I decided to head to Temple Church. Famous for being mentioned in one of Dan Brown's books it was the London base for the Knights Templar. I have quite a thing for the Templars and wondered if they were around today would they replace their horses for Brompton's?

Even though I got one of those key-fob things that allows one to use Boris' Bikes, I have never used one. There really is something elegant about a Brompton when compared to ordinary bikes.

Those of you would went on the BWC Launch Event will remember when we cycled along The Mall and past Buckingham Palace. I stopped for a few photos and couldn't resist including the Brompton in the frame. 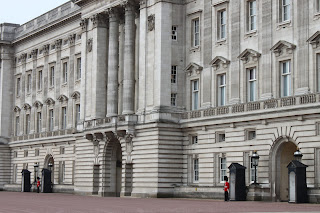 The guard below didn't of course say anything but you could see by the look in his eyes that he was complementing me on a rather wonderful choice of personal transport.
There you have it. A lovely ride with no particular agenda or route. The Brompton really does come into its own in London. If you want to take the odd photograph it really is a go anywhere bike. Being so manoeuvrable means you can squeeze into the narrowest of streets and if needed fold it up and carry it for a while, only to unfold and go when you are able. (For those of you trying to find Temple Church with all the building work going on you'll know what I mean if you go there yourself).
Weather permitting I think I might venture out again next weekend. For this I have something in mind with a definite route to follow. I will need to be brave as it will take me into the darker side of this great City.
at June 05, 2011